James Caviezel Jesus Backlash? Actor Claims He Has Been ‘Rejected in My Own Industry’ 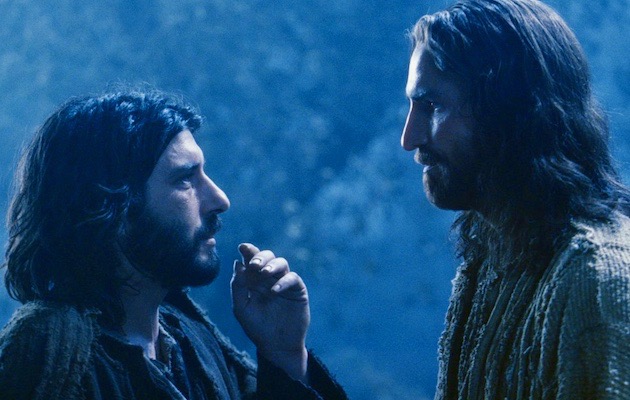 The Passion of the Christ with Jim Caviezel as Jesus Christ and Luca Lionello as Judas. Caviezel followed in the footsteps of, among others, H.B. Warner (The King of Kings, 1927), Jeffrey Hunter (King of Kings, 1961), Max von Sydow (The Greatest Story Ever Told, 1965), and Robert Powell (the TV miniseries Jesus of Nazareth, 1977). An ardent Catholic, Caviezel is best known for his performance as a Zen/Christ-like American soldier in Terrence Malick’s acclaimed 1998 World War II drama The Thin Red Line.

Jim Caviezel claims he has been “rejected in my own industry” after playing Jesus in Mel Gibson’s The Passion of the Christ (2004) – worshiped by many as the closest a Hollywood blockbuster will ever get to the Second Coming, reviled by others as a sadistic, fetishistic work tainted with anti-Semitism.

Caviezel came up with that remark while speaking at the First Baptist Church of Orlando, Florida, on April 30, 2011. In the words of the Orlando Sentinel‘s Roger Moore, the Passion of the Christ star was in town “to give witness to his faith, to urge others to share it and to sell a new all-star audio production of the Bible that he has produced.”

At the church, Caviezel recalled that Mel Gibson had warned him before they began filming of The Passion: “You’ll never work in this town again.”

The Jesus-to-be responded: “We all have to embrace our crosses.” Caviezel later added, “We have to give up our names, our reputations, our lives to speak the truth.”

What “truth” exactly Caviezel was referring to remains unclear. But it bears remembering that long before Caviezel’s Jesus there were many others whose portrayers went on with their acting careers unscathed. In other words, anyone who claims that Caviezel’s acting career stalled because of anti-Christian bigotry in (Jewish-dominated? Satan-worshiping?) Hollywood are either ignorant or dishonest.

Below are four notable Made in Hollywood Jesuses:

James Caviezel The Passion of the Christ photo: Newmarket Films

Below is the domestic box office take of James Caviezel’s films, whether in leads or supporting roles, released from 2004 to the present (via Box Office Mojo). Could that be one important reason producers have shied away from him?

Caviezel’s pre-2004 films – including supporting roles – generally performed much better perhaps because he was usually partnered with bigger names, including Jennifer Lopez, Morgan Freeman, Kevin Spacey, Helen Hunt, and Dennis Quaid. Even so, none of his movies could be called a blockbuster. Titles from 1998 to 2002 are listed below:

Note: figures not adjusted for inflation.

You’re examples of Made In Hollywood Jesus films that suffered no backlash are pointless, e.g. films pre-1990 before the current Hollywood Christian freak out kicked in, or recent films hostile to Christian orthodoxy. These have always had the blessings of Hollywood’s Vatican.

There’s a difference between playing in a hollywood-safe version of the story and this one that was wildly successful and completely told from the standpoint of a believer.