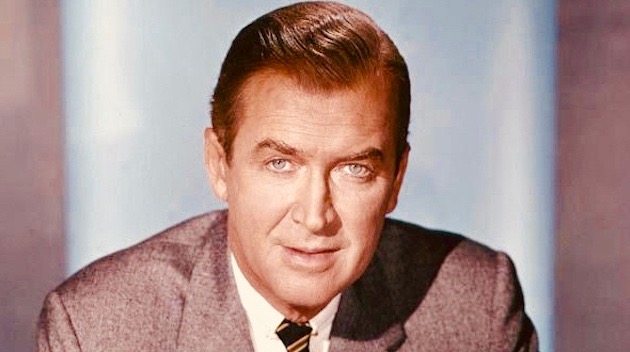 The personification of all-American aw-shucksiness – of the sort you find only in bad movies and bad literature – James Stewart, fondly remembered by some as “Jimmy Stewart,” was one of the biggest Hollywood stars of the 20th century.

The Jimmy Stewart article below is currently being revised/expanded. Please check back later.

In a way, it’s hard to understand his long-lasting success. By the time Stewart popped up on the scene in the mid-to-late 1930s – and long before he became known as “Jimmy” – Gary Cooper had already cornered the coyly shy boy/man-next-door schtick beloved by audiences in the U.S. and elsewhere.

Besides, unlike Cooper (or Errol Flynn, Tyrone Power, and the like), Stewart wasn’t exactly a handsome, athletic type, while his slow, nasal drawl was the sort of voice that would have immediately destroyed his career had he been a romantic silent film star trying to stay afloat at the dawn of the sound era.

But then again, perhaps Stewart’s very apparent ordinariness is what helped him become a major star. Through him, inarticulate, unattractive, unintellectual Average Joes could see themselves as the objects of desire of countless female Hollywood stars from the late 1930s to the late 1950s, whether homespun like Margaret Sullavan and June Allyson, independent-minded like Jean Arthur, arrogant like Katharine Hepburn, sophisticated like Claudette Colbert, ethereal like Hedy Lamarr, or much younger like Kim Novak, Vera Miles, Doris Day, and Grace Kelly.

Thus popular Jimmy Stewart was – in comedies, dramas, Westerns, and romantic fare. You can check out several highlights from his nearly five-decade acting career on Aug. 7 on Turner Classic Movies, as Stewart is having his “Summer Under the Stars” day.

For starters, TCM will be presenting MGM’s W.S. Van Dyke-directed After the Thin Man (1936), a weak – but enthusiastically received – sequel to the studio’s 1934 sleeper hit The Thin Man. William Powell and Myrna Loy star as Hollywood’s PG-rated version of Dashiell Hammett’s R-rated Nick and Nora Charles, attempting to solve one more murder.

Stewart has a supporting role, a notable one in that he – much like in Rose Marie that same year – doesn’t play what could be called either a “heroic” or a “naive” type. His overall performance is woefully amateurish, but the darkness kept hidden in most of his other Hollywood roles is evident here, providing us with a hint of what might have been had Stewart been given the chance to play creepy, sleazy, fiendish characters in his heyday as a romantic lead.

And that brings us to Henry Koster’s Harvey (1950) and Otto Preminger’s Anatomy of a Murder (1959) – two of Stewart’s best movies, featuring what are likely his two most effective performances.

In the former, he’s Elwood P. Dowd, a middle-aged “eccentric” whose best friend is an invisible giant rabbit named Harvey. The character is supposed to be a harmless, amiable type, but as played by Stewart, Dowd comes across as the kind of guy who would invite little boys and girls over so he could show them his big, white rabbit. Whether intended or not – and it’s hard to believe it wasn’t – his is a masterfully creepy performance that should have earned him that year’s Best Actor Academy Award. (Stewart was nominated but lost to José Ferrer in the highly theatrical Cyrano de Bergerac.)

As a plus, Harvey features Best Supporting Actress Oscar winner Josephine Hull in one of her – tragically – rare film appearances. Although a little overstretched here and there, Harvey is a must.

Nearly as effective is Stewart’s performance as a folksy but sleazy defense attorney in Anatomy of a Murder, a blockbuster partly thanks to its theme and situations: Relative newcomer Lee Remick (replacing original choice Lana Turner, who didn’t get along with Preminger) is an alleged rape victim whose panties play a key role in the story and who may just happen to enjoy getting a little physical abuse from psychopathic but sexy husband Ben Gazzara, a U.S. army lieutenant fiercely fighting for freedom – his own, from a murder charge.

Wendell Mayes adapted the novel by Robert Traver (pen name for Michigan Supreme Court Justice John D. Voelker); the novel itself was reportedly inspired by a 1952 murder case in which Voelker had been an attorney for the defense.

Jimmy Stewart isn’t one of the strong elements in Anthony Mann’s great-looking color Western The Naked Spur (1953) – cinematography by William C. Mellor – but Robert Ryan and Ralph Meeker, both compelling tough guys, more than compensate for the leading man’s inadequacies. And as a tomboy, until-then peaches-and-cream leading lady Janet Leigh is fun to watch.

As for Frank Capra’s Mr. Smith Goes to Washington (1939), it’s a great historical curiosity. In a way, it shows how American (really, global) popular culture has changed in the last eight decades, while reminding us that this sort of feel-good fantasy, no matter how phony, still appeals to modern-day moviegoers/TV watchers. Just think, for instance, of Martin Sheen’s U.S. President Josiah Bartlett in the TV series The West Wing.

Anyhow, if there was a god, Barbara Stanwyck would have been the one playing Stewart’s role in Mr. Smith Goes to Washington, as her sharper edge and abhorrence to cutesiness would have prevented the sickeningly idealistic Boy Rangers leader Jefferson Smith from becoming mired in mush. Besides, Stanwyck and Jean Arthur would have made a lovely screen couple.

And speaking of godlier alternate universes, somewhere Deborah Kerr can be seen as the San Francisco denizen obsessed with Kim Novak in Alfred Hitchcock’s Vertigo – in this realm a James Stewart psychological drama that, according to the latest Sight & Sound decennial poll, is the greatest movie ever made.

This Jimmy Stewart article is currently being revised/expanded. Please check back later.