Joanne Siegel, the widow of Superman co-creator Jerry Siegel and the original model for the Man of Steel’s love interest, Lois Lane, died on Feb. 12 in Santa Monica, about 20 km from downtown Los Angeles. Siegel (born Jolan Kovacs on Dec. 1, 1917, in Cleveland, Ohio) was 93.

While still a teenager, she modeled for Jerry Siegel and his partner Joe Shuster. As found in the New York Times obit, the character of Lois Lane was inspired by Frederick Nebel’s Torchy Blane, a wise-cracking reporter played on screen mostly by Glenda Farrell – who looked nothing like Joanne Siegel – in a series of B movies at Warner Bros. in the late 1930s.

Lola Lane, then a Warners contract player along with sisters Priscilla Lane and Rosemary Lane, played Torchy in one single 1938 entry, Torchy Blane in Panama. According to several sources, Lola Lane’s artistic surname (the Lane sisters were actually the Mullican sisters) was adopted for Siegel and Shuster’s newspaperwoman Lois. The first Superman stories came out that same year. 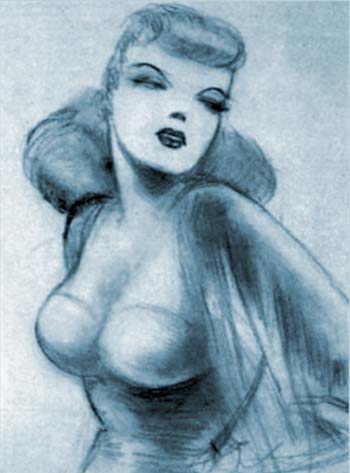 Now, if you look at Glenda Farrell, Lola Lane, or the young Jolan Kovacs, they really don’t seem to have all that much in common with the Lois Lane of the comic strips. Certainly not with the drawing on the right. Joe Shuster apparently copied Kovacs’ hairdo, but not much else.

Later on, legal battles for the rights to Superman were to last more than six decades, from the late 1940s to 2008. According to the Times obit, “a federal judge restored Siegel’s co-authorship share of the original Superman copyrights, though how much money the Siegel family is entitled to is still being adjudicated.”

Previous Lois Lane performers, whether on the big or small screen, were Joan Alexander (voice only), Noel Neill (in the 1948 Superman and a couple of sequels), and Phyllis Coates (the TV series Adventures of Superman, Superman and the Mole-Men).