It’s John Wayne day on Tuesday, Aug. 18, as Turner Classic Movies continues with its “Summer Under the Stars” series.

One of the most popular film stars ever, John Wayne was almost invariably John Wayne (or the screen version of himself) no matter who or what he played. But then again, the same can be said of Gary Cooper, Cary Grant, Humphrey Bogart and other well-respected actors of the studio era. I’m not quite sure why Wayne is generally regarded as less of an actor than those other performers, but perhaps one explanation is that Westerns and war movies aren’t perceived as settings for a real actor, and Wayne made his mark in those two film genres.

Another problem is that Wayne’s heroes were almost always one-dimensional, and the actor hardly ever made an effort to add at least a second dimension to them. (There are exceptions to this rule, most notably in The Shootist, Wayne’s last film.)

A third problem is that Wayne usually looked like he was ready to fall asleep whenever he wasn’t punching someone or blowing holes into some villainous type or other.

You can decide on Wayne’s talents – or lack thereof – for yourself, as TCM will be showing several of his most important films, including True Grit, for which he won a sentimental Oscar; the Academy Award-nominated The Alamo, a monumental bore that Wayne himself directed and produced, and that is more notable – or rather, infamous – for its aggressive and tasteless Oscar campaign than for anything that takes place on-screen; and The Green Berets (above right), which Wayne also co-directed and that perhaps more than any other movie he ever made best reflects his right-wing worldview.

Of the movies listed below, I’d recommend two that I’ve seen: The Sons of Katie Elder, a late Henry Hathaway effort that is surprisingly enjoyable, and Baby Face, a raunchy Barbara Stanwyck vehicle in which Wayne has a small role as one of the steps on which Stanwyck’s antiheroine mounts on her path to glory.

As an aside, McLaglen’s other features include Shenandoah (1965), with James Stewart; The Ballad of Josie (1967), a rare female-centered effort with Doris Day and Peter Graves; The Devil’s Brigade (1968), with William Holden and Cliff Robertson; and The Wild Geese (1978), with Richard Burton and Roger Moore.

Among John Wayne’s best-known star vehicles during his 45-plus-year Hollywood career, some of which pop up regularly on TCM, are the following: 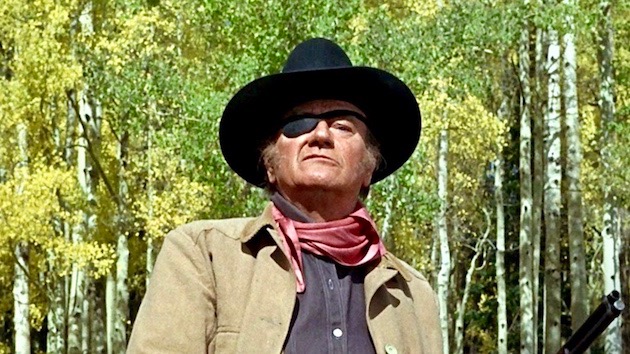 One of cinema’s most iconic and longest-lasting movie stars, John Wayne died at age 72 in 1979.

5:00 AM The Wings of Eagles (1957)
Biography of Frank “Spig” Wead, the pioneer aviator who turned to writing after being grounded by an accident. Cast: John Wayne, Maureen O’Hara, Ward Bond. Director: John Ford. Color. 110 min.

12:00 AM Three Faces West (1940)
A refugee must choose between the man she loves and the man who helped her father escape the Third Reich. Cast: John Wayne, Sigrid Gurie, Charles Coburn. Director: Bernard Vorhaus. Black and white. 79 min.

john wayne rules! he is my hero

I’ve been watching the DUKE for 60 years and for the most part you and most of the critics never new his ability, his talent, or his skill as an actor. We the people, from all over the world love him. What actor do you know that’s been dead for 30 years and still ranks in the top 5 most popular actors. When videos came out what actor had the most purchased,rented,and had his on section in the stores? Yes,the DUKE. Just in case you don’t know who the DUKE is he’s JOHN WAYNE, AMERICAN.

He wasn’t in the war because of his USO involement. He and many other stars where considered morale boosters, propaganda vehicles. John Wayne was made a Honorable Marine by the USMC. that should erase any doubts of his effectivness and heroism. Yes heroism he made the Film Green? Beretts, stood for what is right and decent and stood by his convictions and values no matter where the wind was blowing