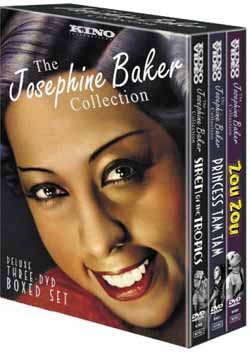 Until relatively recently, only fragments of the silent La Sirène des tropiques — Josephine Baker’s feature-film debut – were available for viewing. The highlight of the film, a rags-to-riches story that would become a staple of Baker’s later films, is a Charleston dance. The ultra-handsome Pierre Batcheff (who would kill himself five years later at the age of 24) co-stars.

Another good reason to check this one out: One of the film’s crew members was a very young Luis Buñuel. La Sirène des tropiques was directed by Henri Étiévant and Mario Nalpas. (By the way, Batcheff and Buñuel would work together in the surrealist classic Un chien andalou / An Andalusian Dog.)

Zou Zou was Baker’s talkie film debut, marking her return to the big screen following a five-year absence. The story is simple, revolving around a newcomer who becomes a star after a prima donna walks out on a show. (Any resemblance to 42nd Street is no mere coincidence.) As befits her “exotic” persona, a feather-clad Baker sings “Haiti” while sitting on a swing inside an oversized birdcage. Her co-star in this one is none other than Jean Gabin, who shortly thereafter would become one of the – if not the – biggest French male star of his time. Marc Allégret, one of the most important French directors from the early 1930s to the late 1950s, handled the proceedings.

Princesse Tam Tam is a revamped version of Pygmalion, with Baker as a Tunisian (!) shepherd girl who, disguised as an Indian (!) princess, is introduced to Parisian society. A mix of alcohol, drums, and that oh-so-hot African blood, however, makes the faux princess unexpectedly leap on a table. Wild table-top dancing ensues. Throughout it all, Baker manages to sing “Dream Ship” and “Neath the Tropical Blue Skies.” Albert Préjean, the charming leading man of René Clair’s equally charming Sous les toits de Paris / Under the Roofs of Paris, is Baker’s co-star, while future star Viviane Romance has a small role. Edmond T. Gréville directed and Pepito Abatino, Baker’s lover at the time, co-wrote the screenplay.

All three discs offer several extras, including song selections and an interview with Jean-Claude Baker, one of Josephine’s many adopted children. The Sirène des tropiques DVD also includes a rare 8-minute short comedy Baker made in 1929, Le Pompier des Folies Bergères / The Fireman of the Folies Bergères.

The films are in French, with optional English subtitles. The silent La Sirène des tropiques has musical accompaniment by Donald Sosin.

Though chances are that La Sirène des tropiques, Zou Zou, and Princesse Tam Tam wouldn’t be included in most people’s lists of best films of all time, those three Josephine Baker vehicles offer a unique opportunity to witness and appreciate an unusual talent in top form.

And Then There Were None Movie Remake: Oscar Nominee Morten Tyldum to Direct

These films are a delight. It’s lamentable that Baker made far too few movies, but her charm and talent are palpable. A fine dancer, singer, and a charming comedienne. For myself, as a black man deeply interested in early cinema, it is an indescribable feeling to see an African-American actress onscreen, who was allowed to be beautiful, glamorous, charming, and an object of masculine desire at a time where such an image was virtually non-existent in films.