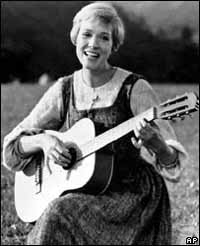 Andrews won a Best Actress Academy Award for her performance as the quirky (and sometimes flying) nanny in the 1964 Disney megahit Mary Poppins, directed by Robert Stevenson. Upon accepting the statuette, she thanked Warner Bros. head Jack Warner for bypassing her for the role of Eliza Doolittle in his mammoth screen adaptation of the Broadway stage musical My Fair Lady, which had starred Andrews. (Audrey Hepburn, then a better bet at the box office, landed the role in the Academy Award-winning film version.)

The English-born Andrews has so far received two other Oscar nominations: As a non-flying (but singing) nun in the 1965 musical blockbuster The Sound of Music, and as a woman-turned-man-turned-woman in the 1982 comedy musical Victor Victoria, directed by her husband Blake Edwards.

Her immense popularity came to a halt at the end of the 1960s, when she starred in two musical megaflops: Robert Wise’s 1968 biopic of Gertrude Lawrence, Star!, and as a spy in Darling Lili, co-starring Rock Hudson and directed by Edwards.

Andrews has worked sporadically on the big screen ever since. Among her other credits are the anti-war drama The Americanization of Emily; the inane Alfred Hitchcock thriller Torn Curtain, opposite Paul Newman; the anti-Hollywood Hollywood comedy S.O.B. (also directed by Edwards), and more recently the two popular Princess Diaries movies.

The supercalifragilisticexpialidocious Andrews will turn 71 next Oct. 1.

Los Angeles, California (September 25, 2006) – Screen Actors Guild (SAG) announced today that Julie Andrews, who for more than a half-century has been a beloved and much-honored stage, film, television and recording star, as well as a celebrated author and dedicated goodwill ambassador, will receive the Guild’s most prestigious tribute—the Screen Actors Guild Life Achievement Award for career achievement and humanitarian accomplishment. Andrews will be presented the Award, given annually to an actor who fosters the “finest ideals of the acting profession,” at the 13th Annual Screen Actors Guild Awards® , which premieres live on TNT and TBS Sunday, Jan. 28, 2007, at 8 p.m. ET/PT, 7 p.m. CT and 6 p.m. MT.

In making today’s announcement, Screen Actors Guild President Alan Rosenberg said, “Julie Andrews is a woman of great generosity, creativity, courage, elegance and wit. She embodies and transcends the memorable roles she has created. Julie has been a positive presence in my life and continues to inspire multiple generations. I believe it is exceptionally significant to be recognized by people who do the same work you do. Julie seems genuinely touched and thrilled to be receiving an award from her fellow actors. I have assured her the honor is ours.”

Julie Andrews was already a Broadway legend when she made her feature film debut in 1964’s Mary Poppins. Her iconic performance in the title role of the magical nanny brought her an Academy Award®, a Golden Globe® and a BAFTA Award. The following year, she earned a second Oscar® nomination and won another Golden Globe® for her unforgettable portrayal of Maria Von Trapp in The Sound of Music. She received her third Academy Award® nomination and won another Golden Globe® for her “dual” role in 1982’s Victor Victoria.

Today’s young film audiences may be more familiar with Andrews as a queen trying to train her teenaged granddaughter to be a princess in The Princess Diaries, and its sequel, The Princess Diaries 2: The Royal Engagement. Andrews also voiced the character of Queen Lillian in the summer 2004 blockbuster hit Shrek 2, and she is currently reprising her role in Shrek 3, due out in the summer of 2007.

Andrews’ other motion picture credits include The Americanization of Emily, Hawaii, Thoroughly Modern Millie, Star! Darling Lili, Torn Curtain and 10, to name only a few.

Julie was born and raised in England, where she first came to fame as a young musical performer on stage and on radio. She was still in her teens when she made her way across the Atlantic and to Broadway, where she made her debut in 1953 in the musical The Boy Friend. She went on to create the role of Eliza Doolittle in Lerner and Loewe’s Broadway musical My Fair Lady in 1956, which became an instant classic and the longest-running musical of its day. Andrews won a New York Drama Critics Award and garnered a Tony nomination for her performance. She received another Tony nomination in 1961 when she originated the role of Queen Guinevere in the Lerner and Loewe musical Camelot. Thirty-five years later, Ms. Andrews returned to Broadway to star in the 1996 stage adaptation of Victor Victoria. Her career came full circle last year when she directed a revival of The Boy Friend, which toured throughout North America.

Andrews has also been honored for her work on television, beginning in 1957 with her Emmy®-nominated performance in the title role of Rodgers and Hammerstein’s musical Cinderella. She later won an Emmy® for her own musical variety series, The Julie Andrews Hour, and also earned Emmy® nominations for Julie and Carol at Lincoln Center, with her close friend Carol Burnett; her appearance on The Andy Williams Show; and her performance in the special Sounds of Christmas. Andrews’ more recent television work includes Eloise at the Plaza and her Emmy®-nominated performance in Eloise at Christmastime. She also re-teamed for the third time with James Garner in the telefilm One Special Night, starred opposite Christopher Plummer in the CBS live production of On Golden Pond and hosted the Emmy®-winning PBS series: Broadway: The American Musical.

Already an accomplished best selling author (The Last of The Really Great Whangdoodles, Mandy, Little Bo, Dumpy the Dump Truck), Andrews has joined talents with her daughter, Emma Walton Hamilton, to pursue the publishing of books committed to stimulating a sense of wonder in children and young readers. The Julie Andrews Collection, an imprint of Harper Collins Publishers, was launched in October 2003 and has released 22 books to date. The Collection includes newly discovered authors and re-purposing books out of print. The Dumpy the Dump Truck franchise is currently being readied (with the Sesame Workshop) as a television series for PBS, with an initial launch in 2007. Andrews and Hamilton’s most recent novel, The Great American Mousical, was released earlier this year to superb reviews and within one week became #7 on the New York Times bestseller list for children’s books. This whimsical tribute to Broadway is serving as inspiration for a newly built revival of Macy’s Thanksgiving Day Parade of the Parade’s historic “Storybook” float, which will carry Andrews and Hamilton in this year’s 80th Annual parade on Nov. 23.

Andrews received her honors as a Dame of the British Empire by Her Majesty Queen Elizabeth II on New Year’s Eve 1999 for Lifetime Achievements in the Arts and Humanities. For her exemplary achievements in the performing arts and American culture, she was named a 2001 Kennedy Center Honoree.

As a Goodwill Ambassador for the United Nations Development Fund for Women (UNIFEM) for 15 years, Andrews traveled as an advocate for women’s human rights and economic security. With her husband, Academy Award®-winning filmmaker Blake Edwards, she is a founding board member of Operation U.S.A., which has provided privately funded worldwide relief and development assistance since its inception in 1979.

Andrews and Edwards, who have been married for nearly 37 years, have five children and seven grandchildren.

Screen Actors Guild (SAG) is the nation’s largest labor union representing working actors. Established in 1933, SAG has a rich history in the American labor movement, from standing up to studios to break long-term engagement contracts in the 1940s to fighting for artists’ rights amid the digital revolution sweeping the entertainment industry in the 21st century. With 20 branches nationwide, SAG represents nearly 120,000 working actors in film, television, industrials, commercials, video games, music videos and other new media. The Guild exists to enhance actors’ working conditions, compensation and benefits and to be a powerful, unified voice on behalf of artists’ rights. Headquartered in Los Angeles, SAG is a proud affiliate of the AFL-CIO. More information is available online at www.sag.org.