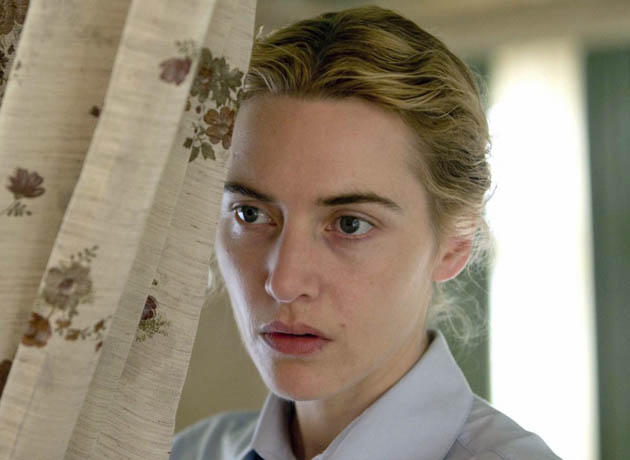 Kate Winslet in The Reader. Double Golden Globe nominee Kate Winslet is in the running as Best Actress – Drama for her performance as Leonardo DiCaprio’s dissatisfied suburban housewife in Sam Mendes’ 1950s-set Revolutionary Road and as Best Supporting Actress for Stephen Daldry’s (partly) 1950s-set The Reader, in which she portrays an illiterate German woman who, some time after becoming emotionally and physically intimate with a teenager (David Kross), learns both to read and to grasp what should have been obvious to anyone regardless of literacy level: the Nazi regime was really, really monstrous – and so was her own participation in it.
Contents hide
1. Golden Globes: Double nominee Kate Winslet while Sam Mendes gets some awards season recognition
1.1. ‘Revolutionary Road’ gets four nods
1.2. More Golden Globes: Hollywood couple Angelina Jolie & Brad Pitt + veteran Clint Eastwood squeezes in
1.3. Meryl Streep breaks Golden Globes record
1.4. Nicole Kidman out, Tom Cruise in
1.5. Movie celebrities among TV nominees & British talent everywhere
1.6. Golden Globes’ snubs
1.7. Kate Winslet to receive Santa Barbara Film Festival Montecito Award
1.8. Why (not) Kate Winslet?
1.9. Annie Awards: ‘Kung Fu Panda’ way ahead of ‘WALL-E’ & ‘Waltz with Bashir’
1.10. More Best Animated Feature nominees
1.11. Annie Awards winners & nominations

Following, among others in recent years, Nicole Kidman (Moulin Rouge! & The Others, 2001), Meryl Streep (The Hours & Adaptation, 2002; more on Streep further below), and Leonardo DiCaprio (The Departed & Blood Diamond, 2006), Kate Winslet is the latest performer to receive two nominations in the Golden Globes‘ Motion Picture categories:

Winslet has the biggest chance in the supporting category, especially considering that, unlike the competition, she has the female lead – in fact, the title role – in Daldry’s film.

As for Revolutionary Road and director Sam Mendes, they have been mostly bypassed this awards season, though Kate Winslet, and to a lesser extent Leonardo DiCaprio and supporting player Michael Shannon have been mentioned – whether as winners or nominees/runners-up – by several groups.

At the Golden Globes, Revolutionary Road is in contention for four trophies. Besides Winslet and Mendes, also nominated are DiCaprio in the Best Actor – Drama category and the film itself. Shannon was bypassed.

For the record, the 2009 Golden Globes’ top films are The Curious Case of Benjamin Button, Doubt, and Frost/Nixon, each with five nominations. Like The Reader and Revolutionary Road, critics’ fave Slumdog Millionaire received four nods.

Update: Kate Winslet is the only Revolutionary Road performer shortlisted for the 2009 SAG Awards.

Besides Kate Winslet and Sam Mendes, another movie couple that made it onto the Golden Globes’ roster is Angelina Jolie and Brad Pitt – for, respectively, Clint Eastwood’s period drama Changeling and David Fincher’s period drama/fantasy The Curious Case of Benjamin Button.

Neither one has much of a chance of winning. Jolie is the dark horse in the Best Actress – Drama race, while the Best Actor – Drama Golden Globe will surely go to either of this awards season’s faves: Sean Penn (Milk) and Mickey Rourke (The Wrestler).

This year’s Best Foreign Language Film nominees are all among the usual suspects. Indeed, four of the five titles will probably end up getting Academy Award nods. The one exception is Philippe Claudel’s I’ve Loved You So Long / Il y a longtemps que je t’aime, which is ineligible in that particular Oscar category.

And if the revered Clint Eastwood failed to be shortlisted in the Best Actor – Drama (Gran Torino) and Best Director (either Gran Torino or Changeling) categories, the Hollywood Foreign Press Association made sure to have him somewhere: Best Original Score (Changeling) and Best Song (“Gran Torino”). 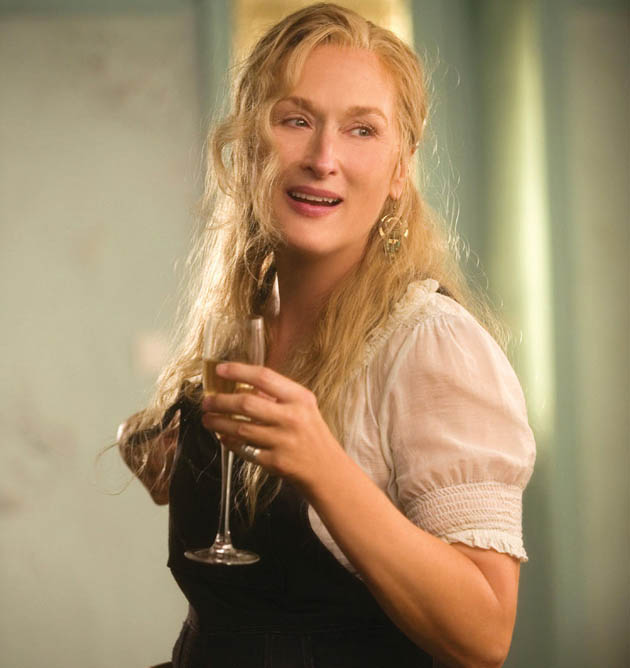 Academy Award record-holder Meryl Streep – 14 nominations in the acting categories – has just made Golden Globe history as the most nominated – 23 times; both film & TV – performer ever. Now in second place, Jack Lemmon had 22 nods.

Nicole Kidman out, Tom Cruise in

In fact, the 2008 Golden Globe nominations’ biggest surprise was the absence of Nicole Kidman in Baz Luhrmann’s sprawling Australia, which was totally shut out.

Kidman’s “snub” is particularly surprising when one considers that former husband Tom Cruise did receive a Best Supporting Actor nod for his portrayal of the gross-looking, gross-sounding Les Grossman – reportedly inspired by either Ben Stiller’s producing/business partner Stuart Cornfeld or Viacom chair Sumner Redstone (or both) – in Stiller’s hit comedy Tropic Thunder.

Cruise’s nomination, by the way, elicited laughter from journalists present at the Golden Globes announcement ceremony at the Beverly Hilton Hotel. Laughter also greeted James Franco’s nomination – not as Best Supporting Actor for Milk, mind you, but as Best Actor – Comedy or Musical for David Gordon Green’s Pineapple Express.

But if Nicole Kidman was nowhere to be found on the Golden Globes’ roster, big-screen celebrities were just about everywhere – including among the television nominees. Such as the following Oscar winners/nominees:

Moreover, there are lots and lots of British and (to a lesser extent) Irish talent just about everywhere.

And finally, besides Nicole Kidman, notably missing in action from the 2009 Golden Globes’ list of nominees are the following:

We should add that Gus Van Sant’s generally well-regarded Milk, about slain gay San Francisco politician Harvey Milk, and Christopher Nolan’s acclaimed – and immensely successful – Batman movie The Dark Knight nearly got completely shut out: Milk has Sean Penn in the Best Actor – Drama race, while Best Supporting Actor contender (and shoo-in winner) Heath Ledger is the only The Dark Knight talent in the running.

Kate Winslet. A potential Academy Award double nominee for Revolutionary Road (as Best Actress) and The Reader (as Best Supporting Actress), Kate Winslet will be receiving the Santa Barbara Film Festival’s Montecito Award for her “series of classic and standout performances.” Well-received Kate Winslet portrayals include those in Ang Lee’s Sense and Sensibility (1995), James Cameron’s Titanic (1997), Richard Eyre’s Iris (2001), Michel Gondry’s Eternal Sunshine of the Spotless Mind (2004), and Todd Field’s Little Children (2006) – all of which earned her Oscar nominations.

In other Kate Winslet news…

The 2009 Santa Barbara Film Festival has announced that Kate Winslet will be handed its Montecito Award, honoring “a performer who has given a series of classic and standout performances in his/her career.”

The Winslet tribute will be held on Friday, Jan. 23, at Santa Barbara’s Arlington Theatre.

Why (not) Kate Winslet?

Now, for how long has Kate Winslet been around?

But see, Winslet is one of the frontrunners for the 2009 Academy Awards for both The Reader and Revolutionary Road.

When it comes to awards season festival honors in Southern California, that’s (nearly) all that matters.

And really, if local film festivals are going to be honoring someone who hasn’t enjoyed a truly lengthy career, why not five-time Oscar nominee Kate Winslet?

For though The Reader co-stars the gifted Ralph Fiennes and gives a lot of screen time to a young actor named David Kross, it is Winslet’s haunting performance that gives the film what success it has. 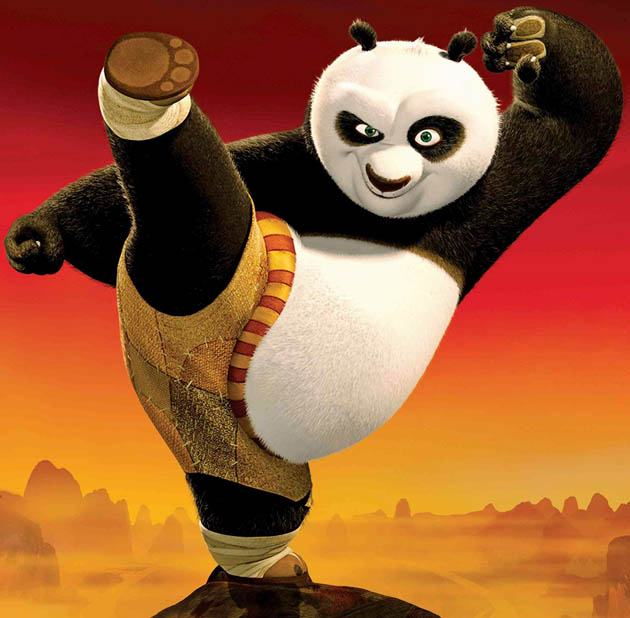 From Kate Winslet to kung-fu-fighting pandas: The International Animated Film Association’s 2009 Annie Awards’ nominations are in.

Mark Osborne and John Stevenson’s Kung Fu Panda, a DreamWorks Animation release, is up for 16 Annie Awards, among them Best Animated Feature and Best Directing in an Animated Feature Production.

The Annie Awards’ three other Best Animated Feature nominees are the following:

The Annie Awards list below has been updated to include the winners in each category. (Feb. 2011 update: Check out “Controversial Annie Awards.”)

June Foray Award:
Bill Turner for significant and benevolent, or charitable impact on the art and industry of animation.