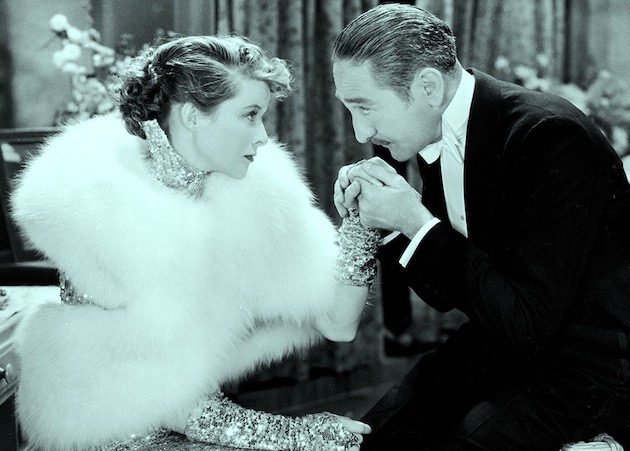 In February 2007, the Academy of Motion Picture Arts and Sciences will be displaying 50 brand new Oscars, four statuettes that belonged to record-breaker Katharine Hepburn, two Testimonial Awards, and one extra gold-plated naked bald man with a sword for visitors to hold while being photographed for posterity. The exhibition, named “Meet the Oscars, Los Angeles,” will take place between Feb. 9–24 on the third level of the Hollywood & Highland Center.

As per the Academy’s press release, “Meet the Oscars, Los Angeles” will also include interactive “Oscar trivia” kiosks “where visitors can test their knowledge of Oscar winners, movie quotes and Academy Awards factoids.” (You can also test your Oscar knowledge – or lack thereof – here.)

Katharine Hepburn’s four Oscars – a record in the acting categories – were for her performances in the following:

All four Hepburn wins were in the Best Actress category.

* The Academy Awards’ eligibility period initially went from early August to late July of the following year. The year Hepburn won Best Actress encompassed 18 months (August 1932–December 1933), so the Academy Awards could following the calendar year (for a few more years, with some leeway for January releases in the Los Angeles area) beginning in 1934.

The two “Testimonial Awards” are the Honorary Academy Awards to be presented to veteran composer-conductor Ennio Morricone (Once Upon a Time in the West, Once Upon a Time in America) and the Jean Hersholt Humanitarian Award to be presented to former Paramount Pictures chairman Sherry Lansing, whose credits as a producer include Fatal Attraction (1987), The Accused (1988), and Indecent Proposal (1993).

Both are Oscar statuettes.

The other fifty (nameless) statuettes featured in the exhibition will be presented to winners at the 2007 Academy Awards ceremony next Feb. 25.

How heavy is an Oscar statuette?

In case you’re planning on attending “Meet the Oscars, Los Angeles” and you’ve always dreamed of grabbing a naked bald man, etc., you’re probably wondering, “How heavy is an Oscar statuette? Does one need to be in good shape before attempting to lift one of them?”

The simple answer is: no need to buff up.

Each Oscar statuette weighs an easily liftable 8½ pounds and stands 13½ inches tall. Handcrafted each year by R.S. Owens & Company in Chicago, they are made of the metal alloy britannia, and are plated in copper, nickel, silver, and 24-karat gold. 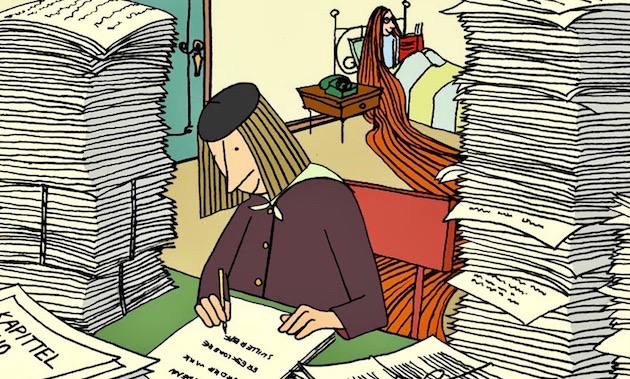 The Danish Poet. A National Film Board of Canada and Mikrofilm (Norway) co-production directed, written, and animated by Torill Kove, the 1940s-set animated short The Danish Poet traces the titular character’s visit to Norway, where, looking for inspiration, he attempts to meet with novelist Sigrid Undset (1882–1949). Instead, he meets and falls in love with a farmer’s daughter, who also cares for him even though she is engaged to be married to someone else. The Danish Poet‘s narrator, two-time Best Actress Oscar nominee Liv Ullmann (The Emigrants, 1972; Face to Face, 1976), directed the 1995 film version of Undset’s period novel Kristin Lavransdatter.

In other Oscar 2007/Los Angeles area news, on Tuesday, Feb. 20, at 7:30 p.m., the Academy will present the program “Shorts!,” featuring this year’s ten Academy Award nominees in the Animated and Live Action Short Film categories. The screening will be held at the Samuel Goldwyn Theater in Beverly Hills.

Hosted by producer-director Taylor Hackford (An Officer and a Gentleman, Ray), an Oscar winner for the 1978 live-action short Teenage Father, “Shorts!” will feature onstage discussions with the nominated filmmakers (subject to availability). The screening films are the following:

As explained in the Academy’s press release, free advance tickets to “Shorts!” are necessary to secure admission. Tickets will be available beginning Feb. 1 at the Academy’s ticket office at 8949 Wilshire Boulevard in Beverly Hills. There is a two-ticket per person limit. For ticket order information, call (310) 247-3600 or visit www.oscars.org/events. 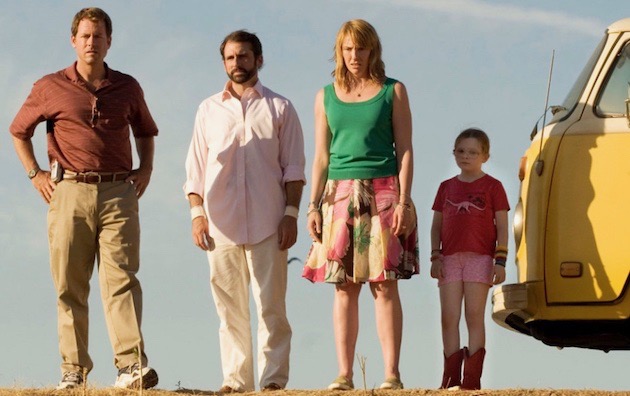 Little Miss Sunshine with Greg Kinnear, Steve Carell, Toni Collette, and Abigail Breslin. Despite its low (reportedly $8 million) budget, Jonathan Dayton and Valerie Faris’ Little Miss Sunshine, written by Michael Arndt, has all the trappings of your average big-studio flick. That may help to explain its having recently topped the Producers Guild Awards’ feature film category. Missing from the image above are Paul Dano and veteran Alan Arkin, who once upon a time terrorized Audrey Hepburn in Terence Young’s Wait Until Dark (1967) and, as Dr. Sigmund Freud, listened to Nicol Williamson’s cocaine-addicted Sherlock Holmes in Herbert Ross’ The Seven-Per-Cent Solution (1976).

Of note, Little Miss Sunshine has also been shortlisted for the Directors Guild Awards and for the Screen Actors Guild Awards in the Best Cast category. Cast members include: Greg Kinnear, Toni Collette, Steve Carell, Abigail Breslin, Paul Dano, and two-time Best Actor Oscar nominee Alan Arkin (The Russians Are Coming the Russians Are Coming, 1966; The Heart Is a Lonely Hunter, 1968).

Five individuals – Marc Turtletaub, David T. Friendly, Peter Saraf, Albert Berger, and Ron Yerxa – were listed as the producers of Little Miss Sunshine. Since Academy rules allow a maximum of three producers per Best Picture nominee, only Friendly, Saraf, and Turtletaub have been shortlisted for the Oscars.

Since its inception in 1989, only six PGA Award feature film winners have failed to take home the Best Picture Oscar. Two of these mismatches took place in the last two years. Here they are:

This year could well be the third time in a row that the Producers Guild and the Academy go their own way.

Among this year’s other PGA Award winners were:

According to Variety, Al Gore gave a well-received speech at the presentation of the Stanley Kramer Award to the producers of the Davis Guggenheim-directed global warming documentary An Inconvenient Truth, starring the former U.S. vice president.

See below a partial list of this year’s PGA Award winners and nominees.

Further awards season news: the winners of the 2007 Bavarian Film Awards – the most important German film prize after the German Academy’s Lolas – were announced on Jan. 19 at a gala ceremony held at the Prinzregententheater in Munich.

The dark comedy follows an 11-year-old Catholic Bavarian boy (Markus Krojer) who believes he has committed too many sins – including the death of his mother (not really his fault) – to be allowed into heaven. What to do?

Well, immortality – i.e., not to die at all and thus not having to deal with the heaven issue – would be a solution. Strategic plans include seducing his teacher (Jule Ronstedt), plotting to murder her husband, and becoming a rock star.

The Bavarian Film Awards’ Best Director was Tom Tykwer for Perfume: The Story of a Murderer / Das Parfum – Die Geschichte eines Mörders, the English-language film adaptation of Patrick Süskind’s bestseller about a sniffing freak (Ben Whishaw, up for a rising star BAFTA Award) who becomes fascinated with the body odor – or, to put it politely, body scent – of a nice-looking young woman (Karoline Herfurth).

Perfume: The Story of a Murderer, which also earned Uli Hanisch the Best Production Design award, has grossed more than €50 million in Germany alone.

Other Bavarian Film Award winners include Jürgen Vogel, named Best Actor for his portrayal of a man who discovers love while dying of cancer in Sven Taddicken’s Emma’s Bliss / Emmas Glück, and veterans Monica Bleibtreu and Katharina Thalbach, who tied in the Best Actress category for their performances as, respectively, a piano teacher working with a violent but talented inmate in Chris Kraus’ 4 Minutes / Vier Minuten and a half-illiterate woman who becomes one of the founders of Poland’s Solidarity movement in Volker Schlöndorff’s Strike / Strajk – Die Heldin von Danzig.

Wrapping up the list of Bavarian Film Award winners:

Verhoeven’s extensive list of credits includes the real-life-inspired anti-Vietnam War drama o.k. (1970), which created a furor at the Berlin Film Festival due to its portrayal of U.S. soldiers as murderers and rapists; The White Rose (1982), starring Lena Stolze as anti-Nazi resistance leader Sophie Scholl; and the equally real-life-inspired Best Foreign Language Film Oscar nominee The Nasty Girl (1990), once again toplining Stolze, this time as a young woman digging into her town’s Nazi past.

Michael Verhoeven, by the way, is unrelated to Dutch filmmaker Paul Verhoeven of Turkish Delight, RoboCop, and Basic Instinct fame and Showgirls infamy.

The Danish Poet image: National Film Board of Canada and Mikrofilm.

MEET THE OSCARS…A MUST SEE! NOT JUST A TOURIST ATTRACTION, IT IS AWESOME!
LOVE THE ENERGY….GO SEE FOR YOURSELF!