Alt Film Guide 14 years ago
Kathleen Turner. Back in the male-centered 1980s, Bette Midler and Kathleen Turner were the only two Hollywood actresses with more than one or two major domestic box office hits. Turner had a quartet of significant commercial performers: Romancing the Stone (1984), The Jewel of the Nile (1985), Peggy Sue Got Married (1986), and The War of the Roses (1989) – not including the blockbuster Who Framed Roger Rabbit (1988), in which, as Jessica Rabbit, she’s heard but not seen. Her already controversial autobiography Send Yourself Roses: Thoughts on My Life, Love, and Leading Roles is coming out in the near future.
Contents hide
1. Kathleen Turner autobiography ‘Send Yourself Roses’: ‘Body Heat’ & ‘Peggy Sue Got Married’ actress discusses William Hurt & Nicolas Cage + Burt Reynolds
1.1. William Hurt
1.2. Nicolas Cage
1.3. Burt Reynolds
1.4. Kathleen Turner movies
1.5. ‘Prizzi’s Honor’ non-honoree
1.6. Jessica Rabbit & ‘The War of the Roses’
1.7. End of film stardom + Tony Award nominations
1.8. Nicolas Cage vs. Kathleen Turner
1.9. ‘The Front Page’ movies

Excerpts from the upcoming Kathleen Turner autobiography Send Yourself Roses: Thoughts on My Life, Love, and Leading Roles (co-written with Gloria Feldt), to come out in February 2008 via Hachette Book Group’s Springboard Press division, have surfaced on several online venues.

Among the topics the Body Heat and Peggy Sue Got Married actress discusses in her book are co-stars William Hurt, Nicolas Cage, and Burt Reynolds. See below.

“In those days, he was pretty wild. He drank a great deal and took a lot of recreational drugs – he loved those magic mushrooms. He loved women, too; I don’t know how many he went through during filming. Bill always wanted to stay in character … [William Hurt] thought I wasn’t taking my acting seriously enough.”

In Body Heat, Kathleen Turner plays a femme fatale along the lines of Barbara Stanwyck in Billy Wilder’s Double Indemnity and Jane Greer in Jacques Tourneur’s Out of the Past. Like Fred MacMurray and Robert Mitchum before him, William Hurt is both the object of the antiheroine’s desire and the means for the achievement of her goals.

“Everything Francis wanted him to do, he went against to show that he wasn’t under his uncle’s wing. Which was ridiculous. Oh, that stupid voice of his and the fake teeth! Honestly, I cringe to think about it. He caused so many problems. He was arrested twice for drunk driving and, I think, once for stealing a dog. He’d come across a Chihuahua he liked and stuck it in his jacket.”

For the record: Nicolas Cage has denied both the drunk driving arrests and the dog theft. (See update further below.)

A sort of female-centered Back to the Future, Peggy Sue Got Married earned Kathleen Turner her – to date – one and only Best Actress Oscar nomination, in addition to that year’s Best Actress National Board of Review award. Nicolas Cage (“Oh, that stupid voice…”) was badly miscast as her love interest. 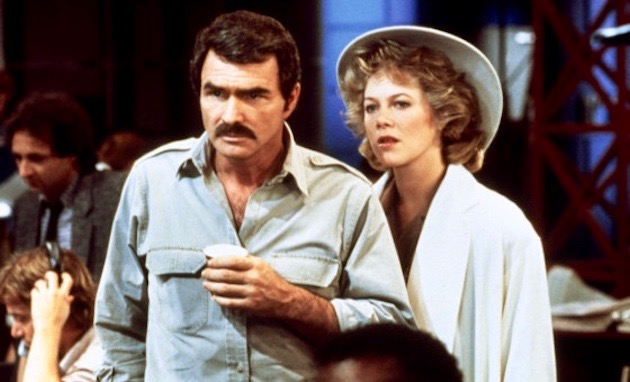 Switching Channels with Kathleen Turner and Burt Reynolds. With one exception (the largely forgotten 1984 release A Breed Apart), from 1984–1986 Kathleen Turner was seen in either commercial hits or prestige projects or both: Romancing the Stone, The Jewel of the Nile, Prizzi’s Honor, Peggy Sue Got Married, and even the box office dud Crimes of Passion, which helped to earn her the Los Angeles Film Critics’ Best Actress award. The 1987 fantasy Julia and Julia ended that lucky streak, while the 1988 bomb Switching Channels all but ended Turner’s commercial/prestige standing – (temporarily) revived by The Accidental Tourist and The War of the Roses.

And here’s Kathleen Turner on working with veteran – and at the time, fast-waning – Burt Reynolds (Deliverance, Smokey and the Bandit) in Ted Kotcheff’s 1988 critical and box office disaster Switching Channels, an updated film version of Ben Hecht and Charles MacArthur’s 1928 Broadway hit comedy The Front Page:

“[Switching Channels was] my unhappiest experience as an actress … For whatever reason, the first thing Burt said to me was: ‘I’ve never taken second billing to a woman.’ Oh, every day there were nasty little digs. For instance, because of my pregnancy, the production team had given me a golf cart so I didn’t have to walk around too much – and Burt even made fun of that. He was just nasty.

“He later accused me of trying to get him sacked … and publicly declared that the sound of my name made him want to vomit.”

In Switching Channels, Kathleen Turner plays a cable news station journalist about to call it quits so she can marry wealthy industrialist Christopher Reeve. Burt Reynolds plays her boss and ex-husband who’ll stop at nothing to keep her on the job.[1]

In addition to Body Heat, Peggy Sue Got Married, and Switching Channels, Kathleen Turner movies include:

Cinematic universes apart, Romancing the Stone and Crimes of Passion earned Turner the Los Angeles Film Critics Association’s Best Actress award. The former title also earned her a Golden Globe in the Best Actress in a Comedy or Musical category.

Curiously, Turner was the one key Prizzi’s Honor performer who failed to be shortlisted for the 1985 Academy Awards. Nicholson and Hickey were nominated in the lead and supporting categories, respectively; Anjelica Huston took home the Best Supporting Actress Oscar statuette; and even Robert Loggia was in contention – for his supporting performance in Richard Marquand’s mystery drama Jagged Edge.

On the positive side, Turner did win her second Best Actress in a Comedy or Musical Golden Globe for playing mob hitman Nicholson’s partner in crime and double-crossing object of desire.

Jessica Rabbit & ‘The War of the Roses’ 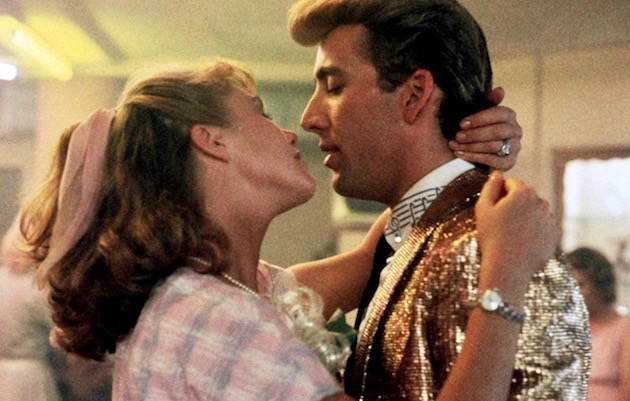 Peggy Sue Got Married with Kathleen Turner and Nicolas Cage. Like John Huston’s – admittedly, more enthusiastically received – Prizzi’s Honor (1985), Peggy Sue Got Married (1986) was both a mid-level box office performer and a personal hit for Kathleen Turner. Directed by the venerated Francis Ford Coppola, the comedy-drama/romantic fantasy earned its star her – to date – one and only Best Actress Academy Award nomination. She lost to sentimental favorite Marlee Matlin in Randa Haines’ Children of a Lesser God, co-starring Turner’s Body Heat (and later The Accidental Tourist) leading man, William Hurt.

Following one critical hit (The Accidental Tourist), one box office hit (The War of the Roses), and two critical and box office duds (Switching Channels and Peter Del Monte’s 1987 fantasy Julia and Julia), Kathleen Turner needed a couple of big movies to put her on steadier professional ground.

Most of her big-screen efforts since then have been commercial – and at times critical – flops. Notable titles include John Waters’ Serial Mom (1994), opposite Sam Waterston and Ricki Lake, and Sofia Coppola’s The Virgin Suicides (1999), opposite Kirsten Dunst and James Woods. Additionally, her voice can be heard in Gil Kenan’s Oscar-nominated animated feature Monster House (2006) – a major box office disappointment in relation to its cost.

Turner has been luckier on the stage, having received two Tony Award nominations for her star turns in revivals of Tennesse Williams’ Cat on a Hot Tin Roof (1990) and Edward Albee’s Who’s Afraid of Virginia Woolf? (2005), both times in roles originally brought to movie life by Elizabeth Taylor.

On the big screen, Kathleen Turner will next be seen in David Frankel’s upcoming Marley & Me (2008), supporting Jennifer Aniston and Owen Wilson.

In response, Turner has issued an apology. In addition, she and the publishers involved have reportedly agreed to cover Cage’s legal costs and to make a “substantial” donation to a charitable organization.

On the bright side, Send Yourself Roses did become a New York Times bestseller when it came out in February – despite the reservations of at least some reviewers. Case in point, Kirkus Reviews‘ dismissal of the book: “The title sums it up quite neatly: a self-indulgent, rambling and intermittently diverting ego parade.”

In the initial Broadway run, the leads in The Front Page were Osgood Perkins, Lee Tracy, and Frances Fuller.

Next Door: Psychosexual Territory Where Hitchcock Never Dared to Tread

Dear Kathleen I loved your acting. Your so taleted when it comes to acting. Your the most wondeful women in the world and respect that. senseraly samantha

I loved her book send yourself roses. she is my favorite actress of all time. i am a 26 yr old male and have loved her since i was 4 years old.!!! great great great woman!!!!!