“I would not be standing here if it wasn’t for Mark Boal, who risked his life for the words on the page and wrote such a courageous screenplay that I was fortunate enough to have an extraordinary cast bring that screenplay to life. And Jeremy Renner, Anthony Mackie and Brian Geraghty. And, I think the secret to directing is collaborating and I had truly an extraordinary group of collaborators in my crew. Barry Ackroyd and Kalle Júlíusson and Bob Murawski, Chris Innis, Ray Beckett, Richard Stutsman and if I could just also thank my producing partners, Greg Shapiro, Nick Chartier and my wonderful agent, Brian Siberell, and the people of Jordan, who were, such a… so hospitable to us when we were shooting. And I’d just like to dedicate this to the women and men in the military who risk their lives on a daily basis in Iraq and Afghanistan and around the world. And may they come home safe. Thank you.”

Mark Boal: Thank you so much. This has been such a dream. Beyond a dream for all of us who have lived for so long with this story. And, you know, we had this fantasy of making our film our way with the talent that we hoped to have. And hopefully, we would find a distributor and somebody might even like the movie.

So to be standing here, this was really, truly, honestly never part of anything we even imagined in our wildest dreams. So thank you so much to each and every member of the Academy for really honoring us beyond anything we could’ve ever imagined.

Greg Shapiro: Thank you to the Academy. This is really unreal and extremely humbling. We also have to thank our intrepid financier and fellow producer, Nicolas Chartier, who bet on this movie when no one else would. The incredible support that we got from CAA, particularly Joel Lubin, Roeg Sutherland, Brian Siberell, our entire cast and crew. Our fearless director.

Mark Boal: Our fearless director. And also, we owe a deep debt of gratitude, by the way, to Summit Entertainment and Rob Friedman and Patrick Wachsberger for distributing this film. And thank you, Mom. I forgot to thank you before.

Kathryn Bigelow: I was just gonna reiterate that with Rob and Patrick, who took a very brave shot with this movie. And we owe them dearly. Perhaps one more dedication, to men and women all over the world who… Sorry to reiterate, but wear a uniform, but even not just the military – HazMat, emergency, firemen. They’re there for us and we’re there for them. Thank you. Thank you.

I can’t say if the Oscar 2010 ceremony was dull or deadly because I didn’t watch most of it. In fact, I watched maybe a total of fifteen minutes overall – thirty seconds here; 45 seconds there; a couple of minutes further down the line. Come to think of it, I wonder how many of the 43.1 million who supposedly watched this year’s Oscarcast actually sat through the whole three-hour-thirty-minute thing. Or even half of it. Or a third.

I was disappointed – but hardly surprised – that none of the Hurt Locker filmmakers mentioned the people of Iraq or the election held in that country on Sunday. Kathryn Bigelow dedicated her Best Director award to “the women and men in the military who risk their lives on a daily basis in Iraq and Afghanistan and around the world.” When she came back to receive a second Oscar statuette for co-producing the year’s Best Picture winner she once again made a dedication “to men and women all over the world who … wear a uniform, but even not just the military – HazMat, emergency, firemen. They’re there for us and we’re there for them.”

Unfortunately, the filmmaker who made the most talked-about movie about the Iraq War to date made no mention of the Iraqi people and what they had to go through as a result of a war on which they had no say. US military personnel had the option of declaring themselves conscientious objectors. The people of Iraq had no such choice. But ignoring the plight of the Iraqis is typical whenever most people or news publications discuss matters over there; but typical or not, it’s unjustifiable. (Figures for Iraqi deaths are at best iffy, ranging from 100,000 to 1 million people, in addition to 2 million refugees.)

The closest to an acknowledgment – if it can be interpreted that way – that there is more to the war in Iraq than the experiences of Americans over there was screenwriter-producer Mark Boal’s reply to a journalist backstage, when he expressed his hope that “there are many more movies and documentaries and articles and discussion on Iraq, and also in Afghanistan, because these are extremely important historical moments that need to be explored by artists.”

But according to the Academy’s transcripts, Boal made no mention of the Iraqi elections or the Iraqis themselves. Nor did Bigelow or fellow The Hurt Locker producer Greg Shapiro while interviewed backstage. 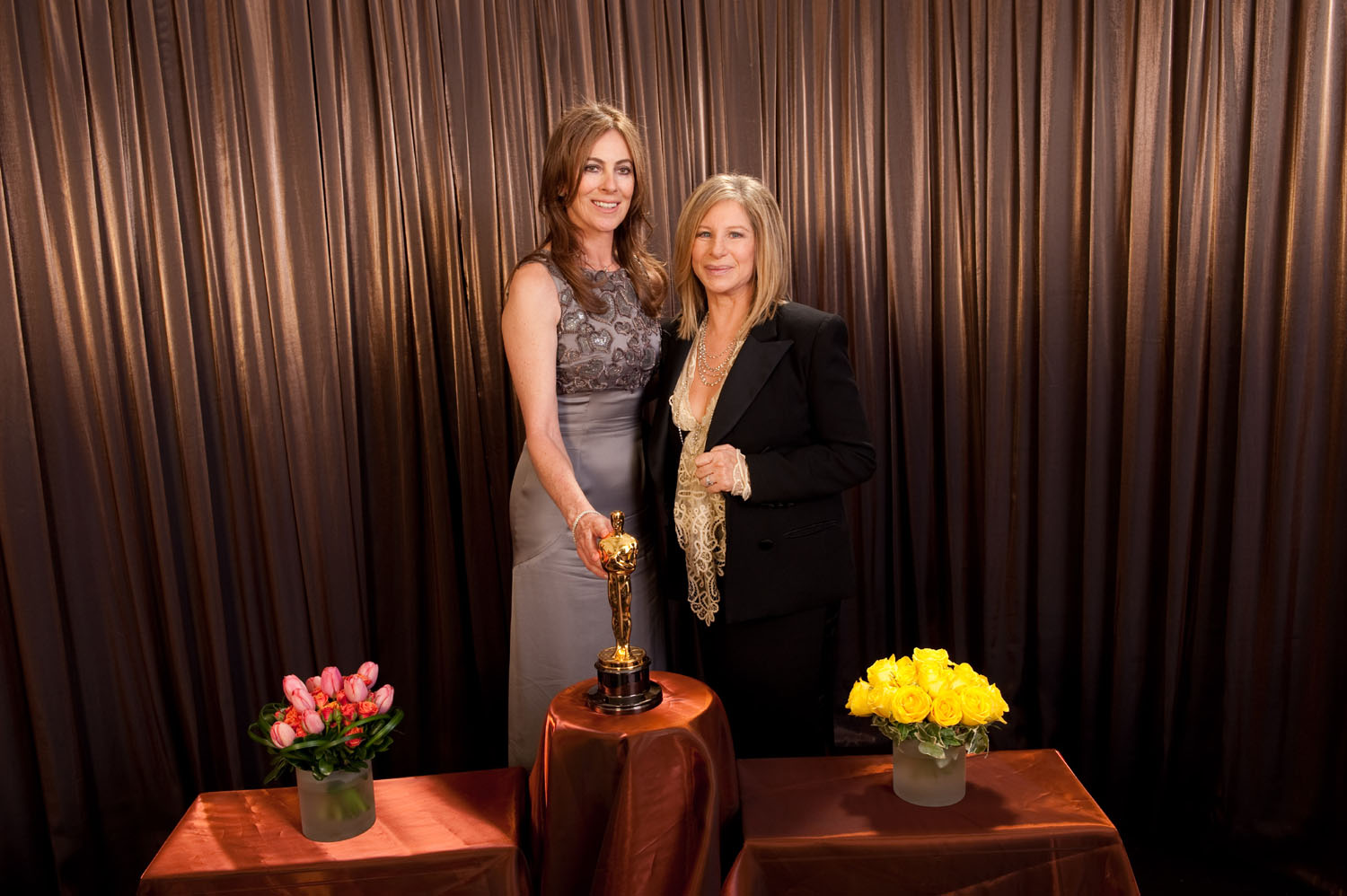 Barbra Streisand, who was almost nominated for a Best Director Oscar a couple of times in the past, was chosen to present the 2010 Best Director Oscar at Sunday’s ceremony. “From among the five gifted nominees tonight, the winner could be, for the first time, a woman,” Streisand told the audience at the Kodak Theatre. And just in time, too: Monday, March 8, was International Women’s Day. After looking at the name inside The Envelope, Streisand editorialized, “Well, the time has come.”

Looking at The Hurt Locker‘s Kathryn Bigelow – and hearing the cheers emanating from the crowd – it was clear that pretty much everyone knew Streisand meant that the time had come for a female director. And it’s too bad that she opted to dramatize Kathryn Bigelow’s gender, especially when Bigelow herself has stated time and again that she wants to be seen as a filmmaker – not a woman filmmaker.

I was rooting for Bigelow, but it would have been fascinating to see Streisand’s face – and those of Oscar show producers Bill Mechanic and Adam Shankman – had Lee Daniels, James Cameron, Quentin Tarantino, or Jason Reitman been named the winner. It isn’t cool to be so blatant about who you want to win when there are five nominees, any of which could have taken the award.

Now, to her credit, Streisand refrained from making comments about either Bigelow’s legs or the idea of questioning her own sexual orientation – unlike Lee Daniels at the 2010 DGA Awards a few weeks ago, where remarks about Bigelow’s gender ran the gamut from condescending to downright offensive.

I was glad that Bigelow opted not to make a big deal – or even a small one – of the fact that she’s the first woman to ever win the Best Director Oscar. Others have done it for her. That’s enough. Having Bigelow go on about her feat won’t make more women get nominated for or win Best Director Oscars. Critically acclaimed productions directed by women, especially those that earn good profits for their studios and/or distributors, and/or that get a good push from critics’ groups during awards season, will do the trick.

By the way, Streisand’sBest Director Oscar near-nods were for Yentl (1983) and for Best Picture nominee The Prince of Tides (1991). Neither is among my all-time favorite films, but I gotta admit that I did – much to my surprise – thoroughly enjoy Director Streisand’s much-panned The Mirror Has Two Faces, in which Actress Streisand stars opposite this year’s Best Actor winner Jeff Bridges and last fall’s Honorary Oscar recipient Lauren Bacall. 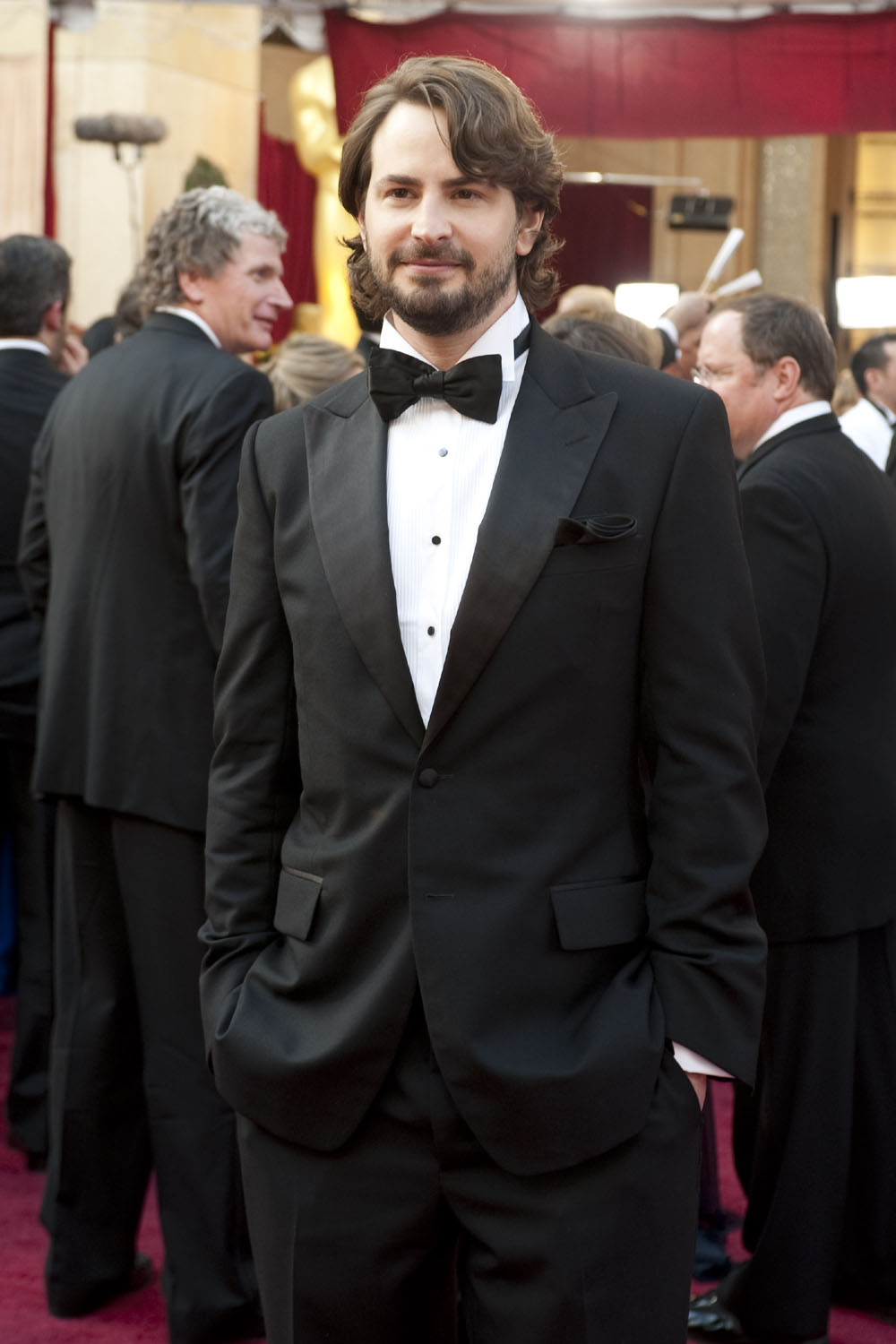 “Oh my god. Wow, thank you Academy. You honor me and humble me with this. More than, more than you know. I was a reporter back from Iraq with the idea for a story about these men on the frontlines of an unpopular war.

“I thought it might make a movie. The result wildly exceeded my expectations. And that is thanks to so many people. To Summit Entertainment. To our amazing cast and crew, and most of all to one extraordinary individual and visionary filmmaker. Kathryn Bigelow, this belongs to you. 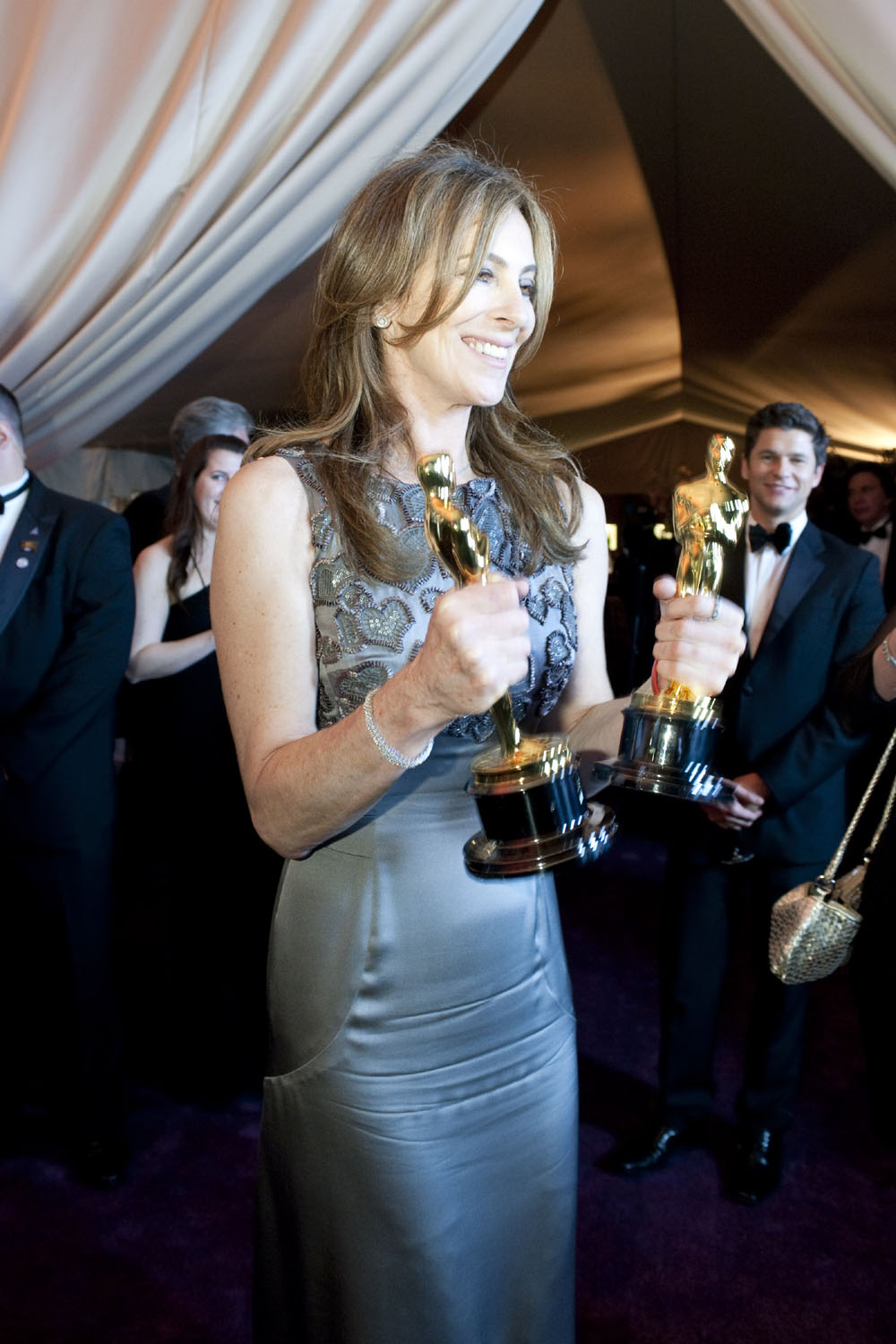 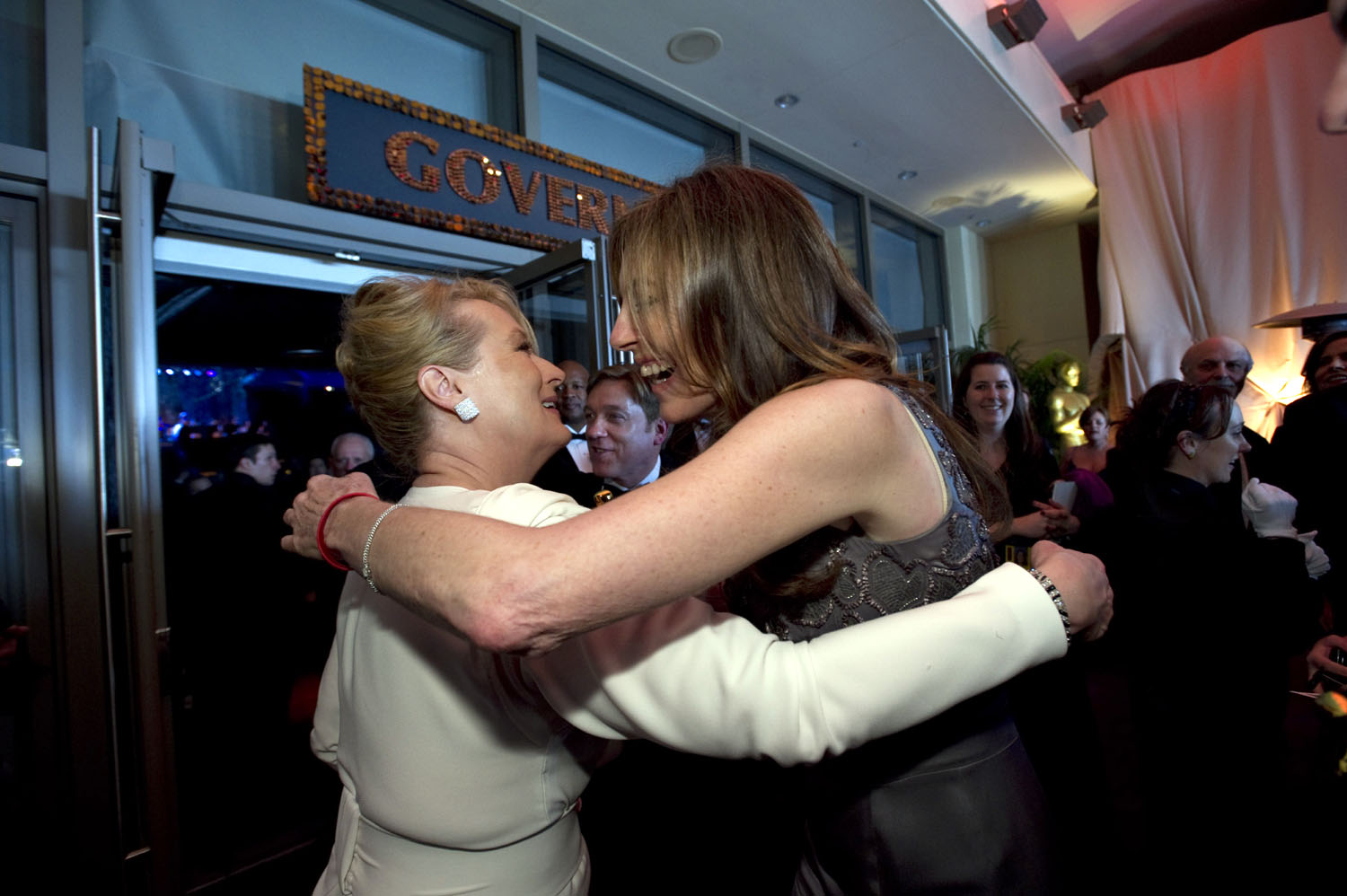 First the good news: the Adam Shankman-Bill Mechanic-produced 2010 Oscar telecast drew 14% more viewers than last year, when Slumdog Millionaire won Best Picture. Whether that was because of Avatar, the Super Bowl Ratings Effect, Sandra Bullock, The Twilight Saga: New Moon‘s Taylor Lautner, Kristen Stewart, and Robert Pattinson (who wasn’t there), Twitter, The New Tenants‘ Joachim Back, the Elinor Burkett-Roger Ross Williams to-do, the rotten economy, or the John Hughes & horror movie tributes, no one can tell.

Now the not-so-good news: Reviews for the Oscar show have been mostly negative. And even the ones that weren’t downright pans were at best unenthusiastic.

Alessandra Stanley in the New York Times: “… [T]here was some waste and abuse, notably the opening dance number — Neil Patrick Harris and a troupe of Las Vegas-style dancers — that was meant to suggest opulent old-fashioned showbiz-as-usual, but mostly tested the clock. When the best picture award was announced, for The Hurt Locker, it was rushed and practically a postscript.”

The Los Angeles Times‘ Patrick Goldstein: “… [A]s far as the Oscars go, it was another huge disappointment, a colossal missed opportunity. Right from the start, the producers seemed unable to re-imagine the show as something other than a glitzy, painfully earnest version of the same cobwebby variety show we’ve been watching for years. I mean, there’s far more inventiveness going on in ABC’s Modern Family than there was on the Oscar stage last night.”

Alan Sepinwall in the New Jersey Star-Ledger: “Still, no matter how tentative the hosts were, how odd some of the production choices were (a random montage of horror movies that seemed unclear on what the definition of a horror movie is, and in some of its choices of Oscar-winning films that were released after The Exorcist, disagreed with the introductory remarks by Taylor Lautner and Kristen Stewart), or how long the show ran, everything might have been okay with an even vaguely competent director.

“Instead, we got Hamish Hamilton making the wrong choice at virtually every turn.”

David Zurawik’s in the Baltimore Sun: “Ragged and uneven opening dialogue with Martin and Baldwin having a very hard time setting a tone thanks largely to weak, insider-ish material. I hope the telecast finds its feet fast. I’m starting to get flop sweat. Martin and Baldwin are clapping at the end of each call-out to performers in the Kodak Theatre audience — and almost no one is clapping with them. Shankman and Mechanic insisted this telecast was not going to play to the room at the expense of the home audience — and that is all this opening is doing. It is one of the worst openings I have ever seen.”