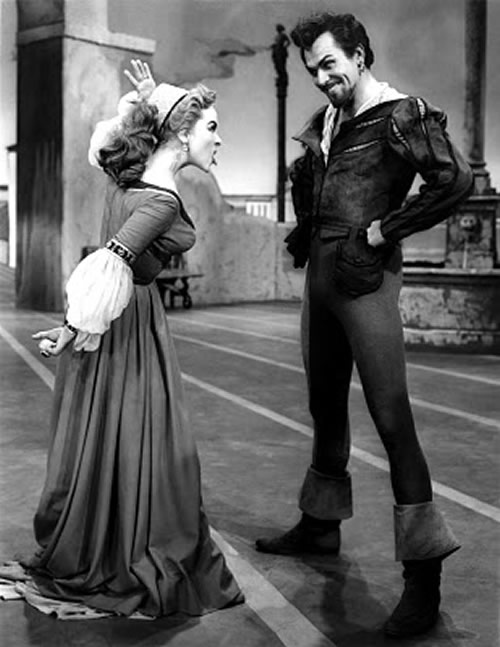 Kathryn Grayson in Kiss Me Kate, with Howard Keel.

Kathryn Grayson, who died at the age of 88 last February, is Turner Classic Movies’ Tuesday, Aug. 10, star. Kathryn Grayson Day is part of TCM’s “Summer Under the Stars” August series.

Grayson’s vehicles are frequently shown on TCM, so there’s nothing unusual scheduled for her day, which includes twelve of her movies. (See Kathryn Grayson movie’s schedule below.)

Critics, however, generally prefer her fiery stage actress in Kiss Me Kate (1953), also directed by George Sidney and co-starring Howard Keel. That’s a lively comedy/musical inspired by Shakespeare’s The Taming of the Shrew. As the second lead, Ann Miller nearly steals the show.

That Midnight Kiss (1949), in which the soprano-voiced Grayson is paired with baritone Mario Lanza, is a major bore, but Two Sisters from Boston (1946), which I haven’t seen, yet, may be enjoyable. June Allyson is always fun to watch, and the director is the (at times) capable Henry Koster.

Andy Hardy’s Private Secretary (1941), with Grayson in the title role, is one of the endless entries in the horror series starring Mickey Rooney that MGM cranked out way back when. I still haven’t found the nerve to watch it, so I can’t tell you how disturbing it is.

Note: Kathryn Grayson can be seen in this montage featuring about two dozen actresses from the studio era.

Kathryn Grayson film schedule and synopses via the TCM website:

11:30 AM It Happened In Brooklyn (1947)
A returning GI and his friends try to make it in the music business. Cast: Frank Sinatra, Jimmy Durante, Kathryn Grayson. Director: Richard Whorf. Black and white. 103 min.

Christmas Movies: The Good, the Bad & the Weird – From Bette...

I really love Kathryn Grayson-she did the peevish ingenue better than anyone else, and also projected a wonderful sense of competence, no matter what the role…

One of my favourites-It Happened in Brooklyn- doesn’t seem to be on the menu… it is on DVD, however, so I’m happy to see them programming things like Two Girls From Boston (which does indeed promise to be interesting) and Lovely To Look At (an excellent remake of Roberta-and Grayson’s performance is the best thing in it, by far… she’s always fantastic as a career woman and does justice to the amazing Kern score)