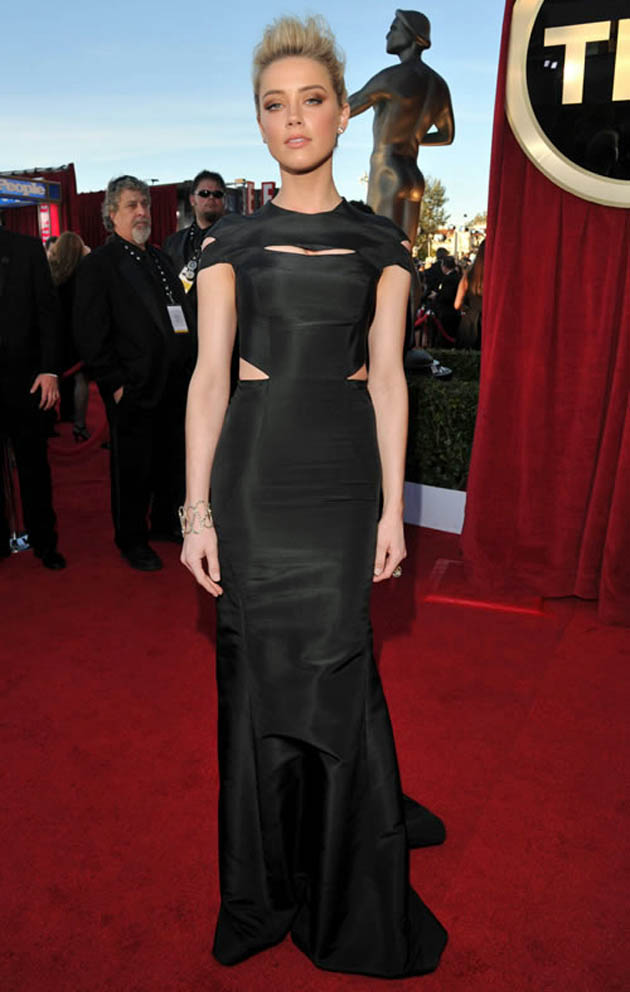 To date, Heard has not been shortlisted for a SAG Award.

Besides the titles mentioned above, Amber Heard’s screen credits include Pineapple Express, with James Franco, John Carpenter’s The Ward, and Marcos Efron’s And Soon the Darkness. 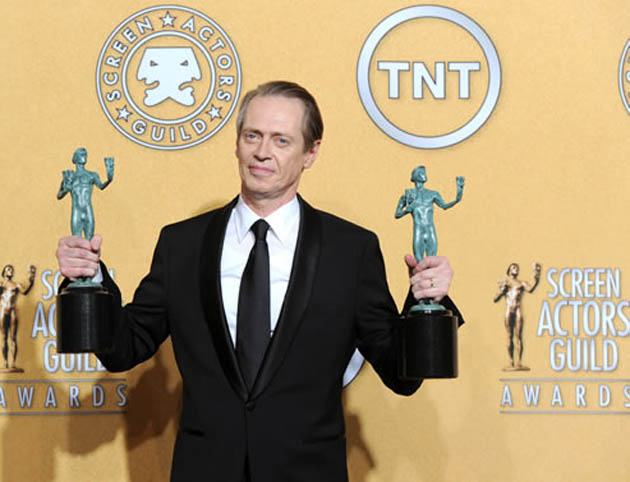 Their competitors were the casts of the following television series:

Besides his television work, Steve Buscemi has kept himself busy in movies as well. Among his 100 or so feature films are the following:

Actress Kyra Sedgwick, a Best Actress nominee in a Television Drama Series for The Closer, is seen above on the 2012 Screen Actors Guild Awards’ Red Carpet just outside the Shrine Auditorium on Jan. 29. Sedgwick lost to Jessica Lange in American Horror Story. Their competitors were Kathy Bates for Harry’s Law, Julianna Margulies for The Good Wife, and Glenn Close for Damages.

Glenn Close has been nominated for six Oscars, but to date she has never won. Though not exactly likely, that could change this year, as she’s in the running for Rodrigo García’s Albert Nobbs.

In the past six years, Kyra Sedgwick has been nominated for 12 SAG Awards for The Closer: seven times as Best Actress and five times as a member of The Closer‘s ensemble. She has never won.

Among Sedgwick’s big-screen movies are: 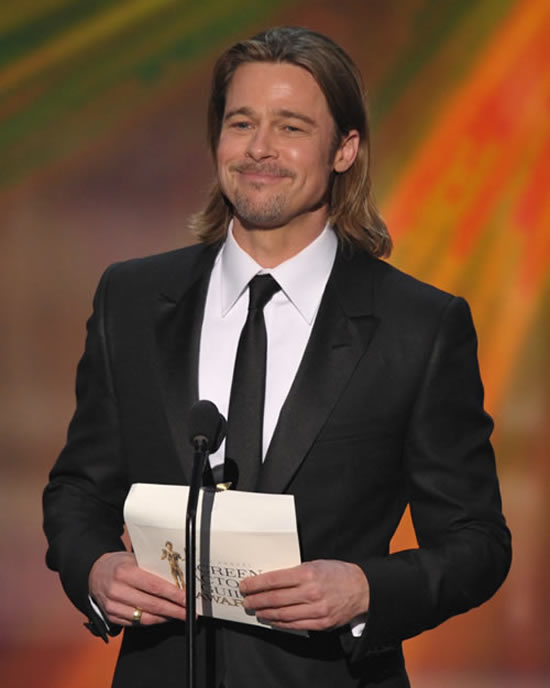 Brad Pitt speaks onstage during the 2012 Screen Actors Guild Awards. Pitt introduced the SAG Award for Best Cast, which went to Tate Taylor’s The Help. The SAG Awards ceremony was broadcast on TNT/TBS from the Shrine Auditorium on January 29 in Los Angeles, California. (Photo by John Shearer/WireImage.) 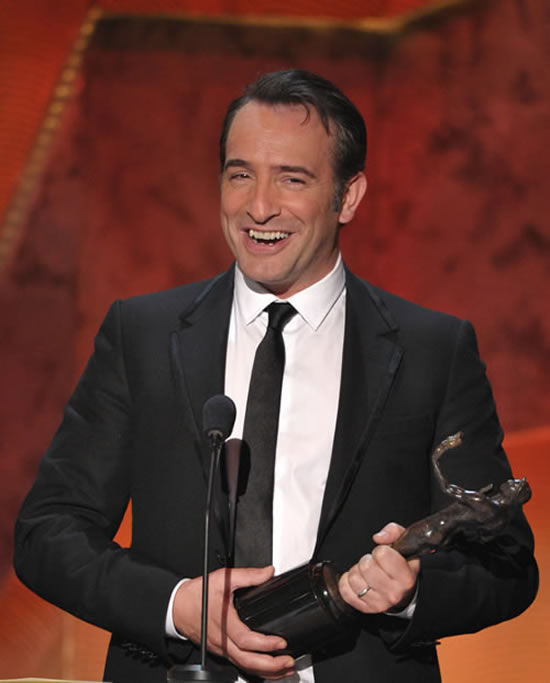 Jean Dujardin beat George Clooney for Alexander Payne’s family drama The Descendants. Clooney was considered the favorite for both the SAG Awards and the Best Actor Oscar. The picture has since gotten fuzzier as far as the Academy Awards are concerned. Dujardin’s fellow SAG Award competitors were Demián Bichir for Chris Weitz’s A Better Life, Brad Pitt for Bennett Miller’s Moneyball, and Leonardo DiCaprio for Clint Eastwood’s J. Edgar.

Among Dujardin’s other movie credits are two with Michel Hazanavicius: OSS 117: Cairo, Nest of Spies and OSS 117: Lost in Rio. Additionally, Dujardin starred or was featured in Ca$h, Brice de Nice / The Brice Man, Lucky Luke and the Daltons, Welcome to the Roses, The Clink of Ice, Little White Lies, and Nicole Garcia’s recent A View of Love, with Marie-Josée Croze and Toni Servillo. Dujardin’s upcoming movies include The Players, and (reportedly) Möbius and A Stormy Summer Night.

Jean Dujardin, winner of the SAG Award for Male Actor in a Leading Role for Michel Hazanavicius’ silent comedy-drama The Artist, poses in the press room during the 2012 Screen Actors Guild Awards. The SAG Awards ceremony was broadcast on TNT/TBS from the Shrine Auditorium on January 29 in Los Angeles, California. (Photo by Michael Buckner/WireImage.)

Among Dujardin’s other movie credits are two James Bond-ish spoofs directed by Michel Hazanavicius: OSS 117: Cairo, Nest of Spies and OSS 117: Lost in Rio. Additionally, Dujardin starred or was featured in numerous French productions, among them Ca$h, Brice de Nice / The Brice Man, Lucky Luke and the Daltons, Welcome to the Roses, The Clink of Ice, Little White Lies, and Nicole Garcia’s recent A View of Love, featuring Marie-Josée Croze and Toni Servillo. Dujardin’s upcoming movies include The Players, and (reportedly) Möbius and A Stormy Summer Night. 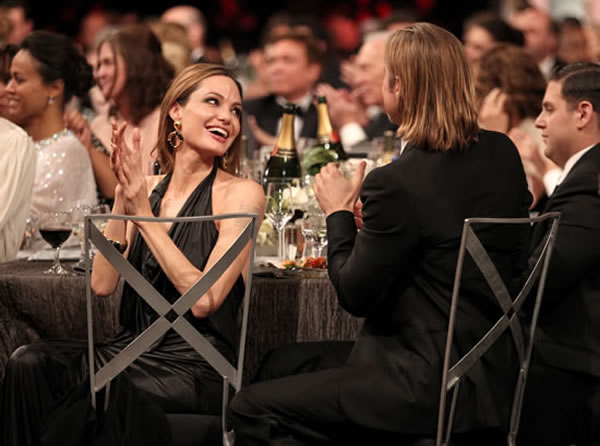 A smiling Angelina Jolie and Brad Pitt applaud someone at the 2012 Screen Actors Guild Awards. (On the far right, Jonah Hill doesn’t look all that excited.) The SAG Awards ceremony was held at the Shrine Auditorium on January 29 in Los Angeles. Pitt was a Best Actor contender for Bennett Miller’s baseball drama Moneyball, featuring Jonah Hill and Robin Wright. (Photo by Christopher Polk/WireImage.)

Brad Pitt’s SAG Award competition consisted of Jean Dujardin for Michel Hazanavicius’ The Artist, George Clooney for Alexander Payne’s The Descendants, Demián Bichir for Chris Weitz’s A Better Life, and Leonardo DiCaprio for Clint Eastwood’s J. Edgar. The winner was Dujardin, who also took home the Best Actor BAFTA and the Golden Globe for Best Actor in a Motion Picture Comedy or Musical.

Angelina Jolie wasn’t in the running for anything at the SAG Awards, though her Bosnian War drama In the Land of Blood and Honey received a Golden Globe nomination for Best Foreign Language Film and the Producers Guild of America’s Stanley Kramer Award. Jolie’s upcoming projects include Robert Stromberg’s Maleficent (for a possible 2013 release), in addition to the following possibilities: Cleopatra), Salt 2, Gertrude Bell, and Churchill and Roosevelt. 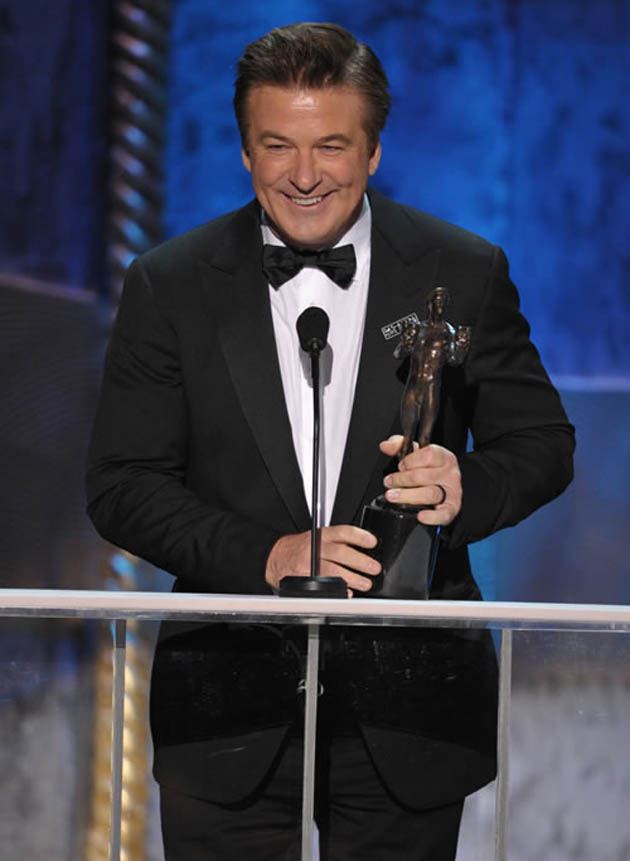 Alec Baldwin speaks onstage while accepting his Best Actor in a Comedy Series SAG Award for 30 Rock at the 18th Screen Actors Guild Awards. This was Baldwin’s sixth consecutive Best Actor win for 30 Rock. This year’s losers were:

Additionally, Alec Baldwin has been nominated for ten other SAG Awards, including five nods as a 30 Rock cast member (the cast won in 2009). He was also included as a cast member of two motion pictures, both directed by Martin Scorsese:

Individually, Baldwin has been singled out for two television efforts – A Streetcar Named Desire (1995) and Nuremberg (2000) – and for Wayne Kramer’s feature film The Cooler, which also earned him a Best Supporting Actor nomination. 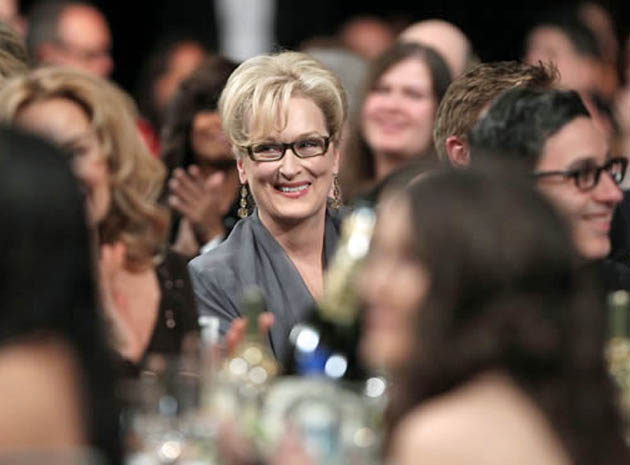 Meryl Streep, nominated as Best Actress in a Motion Picture for her performance as the controversial former British prime minister Margaret Thatcher in Phyllida Lloyd’s The Iron Lady, attends the 2012 Screen Actors Guild Awards, held on Jan. 29 at the Shrine Auditorium in Los Angeles.

Meryl Streep lost to Viola Davis for her performance in Tate Taylor’s The Help. Coincidentally, Davis was featured opposite Streep in John Patrick Shanley’s Doubt (2008) – for which Streep won her first (and so far only) SAG Award for Best Actress in a Motion Picture.

Streep and Davis’ competitors this year were:

Meryl Streep has been nominated for a total of 13 SAG Awards. She won for the aforementioned Doubt and, in the television categories, for Mike Nichols’ mini-series Angels in America (2003).

Streep’s other nominations were for the following feature films:

Meryl Streep has been nominated for a record 17 Academy Awards. She’s in the running this year for The Iron Lady. Previous nominations include those for: