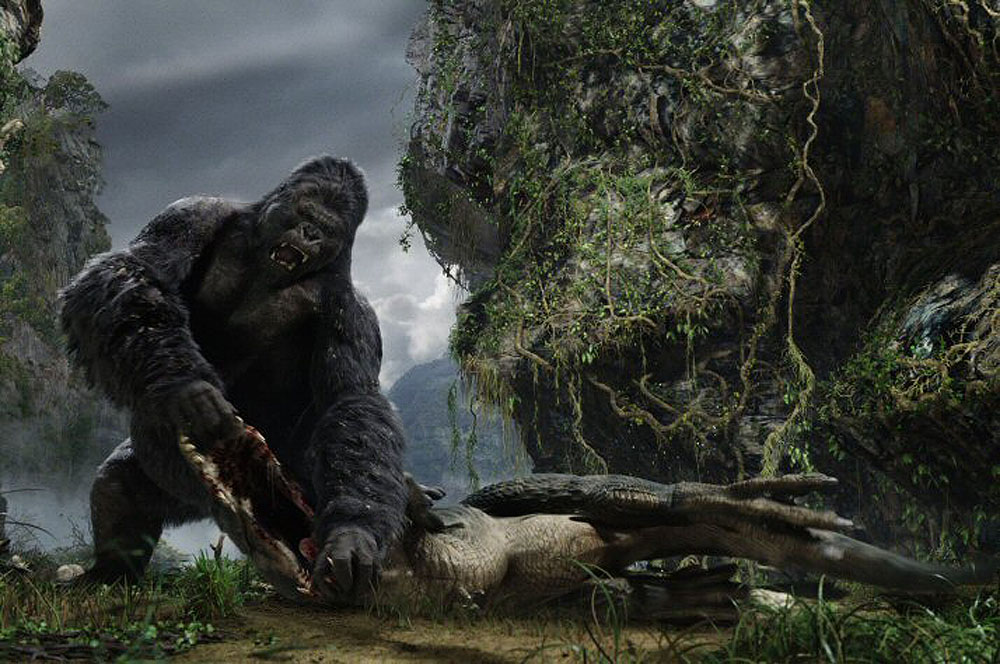 The biggest disappointment about Peter Jackson’s King Kong is that, despite all the p.r. regarding Jackson’s fascination with the Merian C. Cooper & Ernest B. Schoedsack 1933 horror classic, this latest remake is considerably closer in spirit – or lack thereof – to the 1976 Dino De Laurentiis production, with (heavy) touches of Jurassic Park and Raiders of the Lost Ark thrown in. In other words, the new King Kong is very much the sort of adventure film someone like Steven Spielberg would make: a technically proficient, unscary, highly sentimental, and shamelessly artificial thrill ride.

Filmmakers should have learned by now that bigger doesn’t mean better, but perhaps quality wasn’t what Jackson was going after with King Kong. Maybe all he wanted was something bigger than what had been done before. Thus, his giant ape is more gigantic than those found in the previous versions. His 1930s New York City is more impressive than the 1930s New York City found in movies that were actually made in the 1930s. If Jurassic Park had one deadly tyrannosaurus rex, his King Kong has two.

Desperate to keep things moving throughout the film’s overstretched three-hour-plus running time, Jackson stuffs the screen with the aforementioned giant lizards, in addition to giant centipedes, giant insects, giant trees, and giantly mean savages with discolored pupils. Everything to take our attention away from the fact that the new King Kong is akin to a computer game minus the interactivity. For despite the outstanding job of the make-up and visual/sound effects people, the sheer – and considerably less elaborate – horror atmosphere that made the 1933 version a classic is nowhere to be found in the new version.

On the positive side, Naomi Watts (shockingly well supported by Jack Black) didn’t make me long for Fay Wray. In fact, Watts is the most effective special effect King Kong has to offer. Though probably doing most of her acting in front of a green screen, she succeeds where all the giant monsters fail, bringing King Kong out of the realm of video games and into the realm of life.