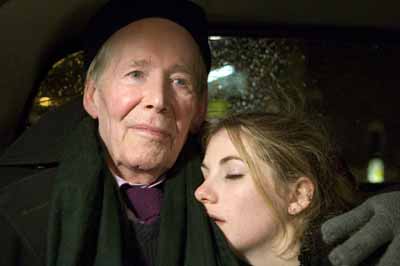 There were numerous surprises at the 2006 British Independent Film Awards (Bifa) ceremony, which was held yesterday, Nov. 29, in West London.

Out of its six nominations, the unofficial favorite, Stephen Frears’ The Queen, about the battle of wills between Queen Elizabeth II (Helen Mirren) and Prime Minister Tony Blair (Michael Sheen) following Princess Diana’s death, won only one award – Best Screenplay for Peter Morgan, reprising his Venice Festival win. (Additionally, Helen Mirren was given the Variety UK Personality of the Year Award.)

Instead, the surprise Best Independent British Film winner was This Is England, Shane Meadows’ semi-autobiographical comedy-drama about a young man’s indoctrination into the world of skinhead gangs in the England of the 1980s. The film also won the Best Promising Newcomer (On-Screen) Award for 12-year-old Thomas Turgoose as the pre-teen-turned-skin. Earlier this fall, This Is England won the Special Jury Prize at the 1st RomeFilmFest.

In the Best Actor category, Dickie’s co-star Tony Curran beat the other unbeatable acting nominee, Peter O’Toole, who plays an old and frail but ever-horny actor in Roger Michell’s Venus. (O’Toole was deemed unbeatable less because of his performance – in this writer’s view a very minor one – than because of his nearly half-century film career.)

Best Independent Foreign Film was Michael Haneke’s first-rate Caché / Hidden, starring Juliette Binoche and Daniel Auteuil as a bourgeois Parisian couple whose complacent lives are dramatically altered by an event in the far-away past. (Among the losers was Pedro Almodóvar’s equally first-rate Volver.)

Among the other winners were veteran Leslie Phillips, 82, chosen Best Supporting Actor/Actress for hamming it up as O’Toole’s actor buddy in Venus; Best Director Kevin Macdonald for The Last King of Scotland, a fictitious tale about the relationship between a Scottish doctor and the deranged Uganda leader Idi Amin (nominee Forest Whitaker); and, curiously, Best Documentary The Road to Guantanamo. Somehow, Michael Winterbottom and Mat Whitecross’ docudrama has been fooling some into believing it is an actual depiction of the fate of three Englishmen of Pakistani ancestry at the American Gulag.

King and Queen rule the 2006 British Independent Film Awards nominations, which were announced on Wednesday, Oct. 25.

I couldn’t resist the pun, even though it’s not only bad but also inaccurate. In actuality, Shane Meadows’ This Is England, winner of the Special Jury Prize at this year’s RomeFilmFest, garnered 7 nods – one more than either Kevin Macdonald’s The Last King of Scotland or Stephen Frears’ The Queen. All three films received Best Picture nominations.

In the acting categories, one can find the renowned (and expected) – Helen Mirren in The Queen, Forest Whitaker in The Last King of Scotland, Peter O’Toole in Venus – next to lesser-known names, including Frances de la Tour in The History Boys, and both Tony Curran and Kate Dickie in Red Road. Veterans Vanessa Redgrave and Leslie Phillips received supporting nods for Venus.

Not surprisingly, Peter Morgan garnered two Best Screenplay nominations – for The Last King of Scotland (with Jeremy Brock) and The Queen.

Surprisingly, Michael Winterbottom and Mat Whitecross’ docudrama The Road to Guantanamo received a Best Documentary nod – apparently it paid off to omit the film’s screenwriting credit (implying that what is shown on screen were mere reenactments of factual events).

Director-screenwriter Jeremy Brock’s Driving Lessons – including cast members Julie Walters, Rupert Grint, and Laura Linney – were ignored by the BIFA. And Helen Mirren aside, so were all cast members of The Queen.

The 9th British Independent Film Award winners were announced at the Hammersmith Palais in West London, on Nov. 29, 2006.

THE VARIETY UK PERSONALITY OF THE YEAR
Helen Mirren

I hope that this year’s edition of the Latino festival was better organized than last year’s, which I attended as a member of the press. For instance, following a screening of José Antonio Dorado’s Colombian drug-trafficking drama El Rey, there were no English-language translators to be found.

Edward James Olmos was present, and asked who in the audience of about 30 people couldn’t understand or speak Spanish. I believe I was the only one who raised his hand. (I can understand and speak some Spanish, but I’m hardly fluent.)

At that moment, a press member for a Spanish-language news publication loudly snapped, “Learn it!” The Colombians in the audience found that funny. I failed to see the humor – or the point, considering that filmmaker Dorado was here in Los Angeles, where English is for the most part the language of communication, to promote his Colombian film to an American audience. Since the director couldn’t understand or make himself understood in English, I’d have thought that a translator would have been a no-brainer, regardless of the number of non-Spanish speakers in the audience.

As it turned out … for a few minutes, Olmos stood next to me whispering in English what Dorado was saying out loud in Spanish. Shortly thereafter, Olmos disappeared. One of the film’s stars stepped in to provide the translation, until the same snappy Spanish-language press member told her to shut up. Since Dorado was ignoring my raised arm – I was right in front of him; my fingers almost going up his nose – I decided it was time to go, report the matter – and get some dinner.

Silver Hugo Award – Best Actor:
Jürgen Vogel (Germany) for his portrayal of a recently released convicted rapist trying to lead a normal life in The Free Will.

Career Achievement Award: Betsy Blair, “long time actress and activist in honor of her body of work, distinguished career in the entertainment industry and uncompromising beliefs in the face of great obstacles.”

The 2006 FIPRESCI Prize is awarded to Day Night, Day Night (US), directed by Julia Loktev.

SHORT FILM COMPETITION
The Gold Hugo for Best Short Film is awarded to Forgetting Betty (US), directed by James Anderson and Robert Postrozny.

Student Animated Film
The Silver Hugo is awarded to Cranium Theatre (US), directed by Jason Sandri.

Special Jury Prize: The Trials of Darryl Hunt (US), directed by Ricki Stern and Annie Sundberg.

CHICAGO AWARD
The Chicago Award is presented to a Chicago or Illinois artist for the best feature film, short film or documentary.
Street Thief (US), directed by Malik Bader.

The Queen (UK) by Stephen Frears

Can anyone tell me the name of the artist and the ballad played in the Red Road (2006) during the slow dance sequence at Clyde’s apartment party? There was no soundtrack listing on IMDB.