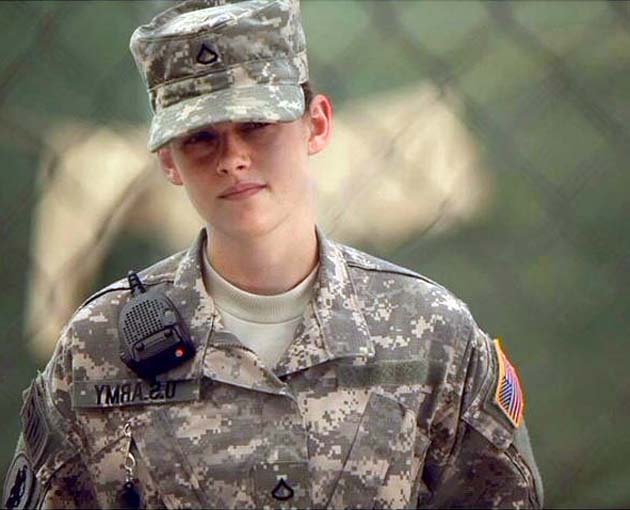 After putting away her Bella Swan wig and red (formerly brown) contact lenses, Kristen Stewart has been making a number of interesting career choices. Here are three examples:

A couple of days ago, it was announced that Kristen Stewart is to join newcomer Joe Alwyn, her On the Road co-star Garrett Hedlund, and veteran Steve Martin in Ang Lee’s film version of Ben Fountain’s bestselling satirical novel Billy Lynn’s Long Halftime Walk.

According to TheWrap, Stewart, who turns 25 on April 9, ’15, is to play 19-year-old Billy Lynn’s older sister Kathryn.

So far it’s unclear how many reported Billy Lynn’s Long Halftime Walk cast members have actually signed on the dotted line. But if they haven’t already, they should be doing so shortly as production is slated to begin later this month (April 2015) in Atlanta. 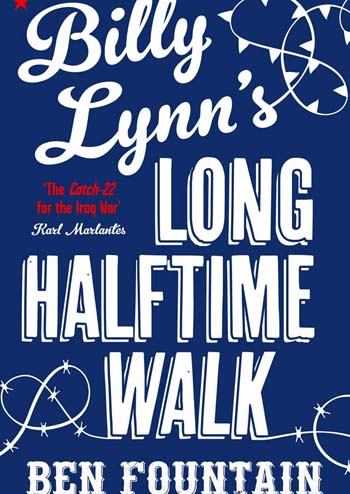 In Ben Fountain’s Billy Lynn’s Long Halftime Walk, a small group of survivors of the fierce (and fictional) Battle of Al-Ansakar Canal are brought from Iraq to the United States for a two-week “Victory Tour,” courtesy of the George W. Bush administration – eager to milk every bit of flag-waving propaganda it can.

Known as the “Bravo Squad,” the group is immodestly described by their own sergeant as “the most murdering bunch of psychopaths you’ll ever see.” Among them is uncultured (but shrewd), thick-accented Texan infantryman Billy Lynn – at 19 too young to drink alcohol at home, but old enough to blow people up overseas.[1]

Fox News watchers – a video of the Battle of Al-Ansakar Canal is a hit on that cable circus show – and countless other American civilians enthusiastically embrace the hype enveloping Billy and his fellow War Heroes. It goes without saying that the characters of the U.S. combatants turn out to be less pristine than both the U.S. government and the U.S. media would have the eagerly gullible U.S. public believe.

The Victory Tour reaches its climax on the All-American Thanksgiving Day holiday, at the All-American Dallas Cowboys stadium, shortly after which the All-American Heroes, no longer of use to either their government or the media (or the patriotic crowds), are to be summarily sent back to Iraq and battlefield anonymity.

Kathryn has a supporting role in the novel, sharing some quality time with her baby brother Billy, who happens to be a virgin. At one point, she’s very close to him (and to his raging hormones), wearing a bikini and “a small gold cross [lying] on the swell of one of her breasts, a tiny mountaineer going for the top.”

The San Francisco Chronicle, for one, praised Billy Lynn’s Long Halftime Walk as “Pulitzer Prize-quality good … A bracing, fearless and uproarious satire of how contemporary war is waged and sold to the American public.”

The book has also been called “the Catch-22 for the Iraq war.” Could be. Although some reviewers have remarked that Fountain’s satire is less cutting than Joseph Heller’s, both books have elements in common.

And as explained in the New York Times, Billy Lynn’s Long Halftime Walk even offers its own version of Heller’s paradox: “investors won’t commit to a film of Bravo’s exploits until a star comes on board, and no star will commit until investors do.” 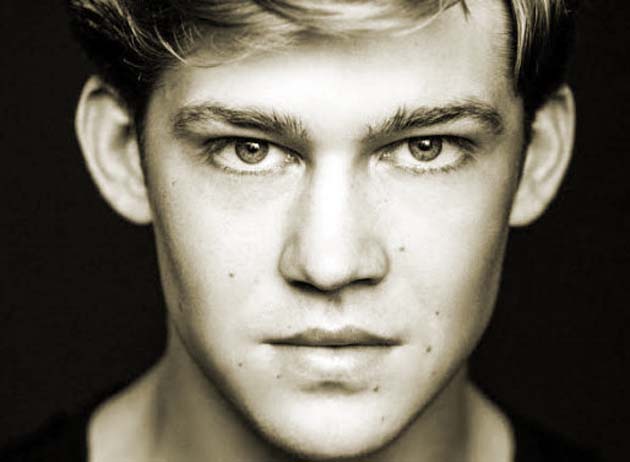 Ben Fountain’s novel has been adapted to the big screen by Best Adapted Screenplay Oscar winner Simon Beaufoy (Slumdog Millionaire) and Jean-Christophe Castelli. The latter had previously collaborated on a trio of Ang Lee movies: Sense and Sensibility (as co-producer James Schamus’ assistant), The Ice Storm (as a “researcher”), and Life of Pi (as an associate producer).

Worth noting is that Billy Lynn’s Long Halftime Walk should be quite different from most other Hollywood movies dealing with the U.S. involvement in Iraq – e.g., Clint Eastwood’s American Sniper, starring Bradley Cooper in the title role; Kathryn Bigelow’s Best Picture Oscar winner The Hurt Locker. Both of these were heavy dramas and neither of them took a direct critical view of either the war itself or American war culture as a whole.

The ‘MASH’ of the homefront?

Now, it remains to be seen whether the movie version of Billy Lynn’s Long Halftime Walk will be, as so often happens, bowdlerized, sanitized, idiotized for mainstream consumption. Or if director Ang Lee and screenwriters Simon Beaufoy and Jean-Christophe Castelli (and their backers) will adhere to the novel’s subversive tone.

In case they do, we might theoretically get the homefront version of MASH, which, written by former blacklisted screenwriter Ring Lardner Jr. (from Richard Hooker’s novel) and directed by maverick filmmaker Robert Altman, turned out to be not only an enthusiastically received take-no-prisoners satire of the U.S. military – and of the military establishment in general, no matter where or when – but also a mammoth blockbuster.[2]

Now, watching Hollywood movies about the Iraq War – and that would undoubtedly include Billy Lynn’s Long Halftime Walk – you’d think that Americans sent to that country were the only ones affected by the carnage. If only some daring filmmaker were to tackle the Iraq War and its disastrous aftermath as experienced by the local citizenry.

But if the myriad movies about past American wars are any evidence, that’s not about to happen. Who would give a damn?

As per Variety, Sony Pictures will handle the worldwide distribution of the film except in China, where it will be released by Bona Film Group.

Although the IMDb lists Billy Lynn’s Long Halftime Walk as an American production, it’s actually an international one, also including Chinese (Bona Film) and British companies (Film4, The Ink Factory).

The Vivien Leigh of the Iraq War?

[1] If the British Vivien Leigh managed to play the Georgian Scarlett O’Hara in the Civil War drama Gone with the Wind, then at least in theory the British Joe Alwyn (any relation to Odd Man Out and The Fallen Idol composer William Alwyn?) should manage to play the Texan Iraq War veteran in Billy Lynn’s Long Halftime Walk.

[2] Other movie satires focusing on the U.S. military include:

Sturges’ film, by the way, has several elements in common with Billy Lynn’s Long Halftime Walk. And so does Frank Capra’s Meet John Doe (1941), with Gary Cooper as the John Doe exploited by the media and the powers-that-be while eagerly embraced by the ever idiotic masses.

From ‘Hair’ and ‘Johnny Got His Gun’ to ‘Mister Roberts’

Milos Forman’s Hair (1979), based on the ’60s hit Broadway musical, skirted outright satire. Yet it’s surely one of the most subversive movies ever made about the United States’ war culture.

The same goes for Johnny Got His Gun (1971), a must-see drama directed by former blacklisted screenwriter Dalton Trumbo (Roman Holiday, Spartacus). Timothy Bottoms stars as a soldier with no face and no limbs, but with, much to his despair, a functioning brain.

* Not much fun behind the scenes either, as star-producer Henry Fonda fired John Ford from the project. An uncredited Joshua Logan, who had directed the Broadway production of Mister Roberts, reportedly reshot much of the film.

Besides the titles mentioned elsewhere in this article, previous Kristen Stewart movies include:

The above co-star Robert Pattinson and Taylor Lautner (a supporting player in the first movie), and feature (in at least one of them), among others: 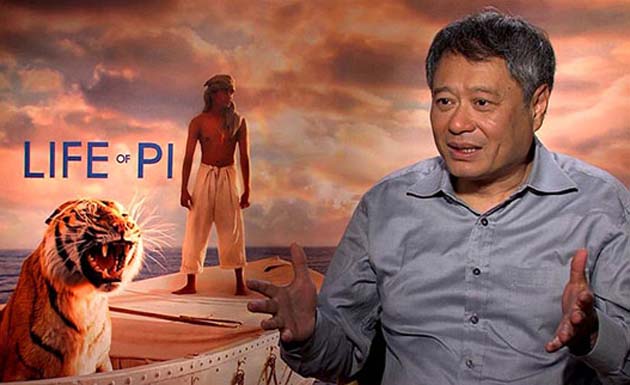 Both Brokeback Mountain and Lust, Caution won the Golden Lion at the Venice Film Festival.

I really enjoyed your article about Kristen Stewart. As a fan, I am excited to see what is next on the horizon for her. She seems to have finally gotten away from Twilight, and has chosen different roles that have suited her. Nice to hear critics praise her work, and thank you for writing it.