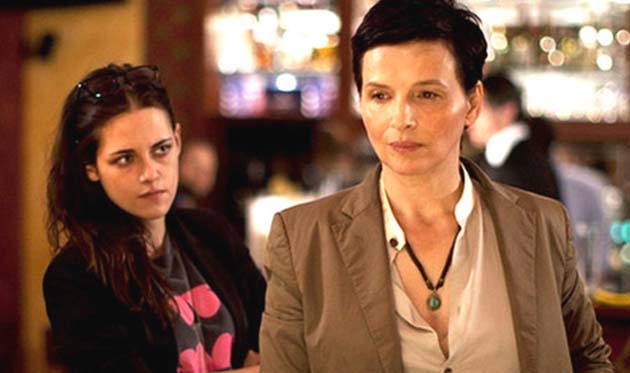 Kristen Stewart is in the running in the Best Supporting Actress category for Clouds of Sils Maria / Sils Maria. Catherine Deneuve has been shortlisted as Best Actress for In the Courtyard / Dans la cour.

So, how are Stewart and Deneuve making César history? Well, let’s begin with “the expected one”: Catherine Deneuve.

One of the biggest film icons ever, Catherine Deneuve is one of those relatively rare international film superstars who has never bothered with – or needed – a Hollywood career. Deneuve, who turned 71 last Oct. 22, has been making films for nearly six decades.

To be exact, her career began in 1957, with a small role – billed as Catherine Dorléac – in André Hunebelle’s The Twilight Girls. No, this has nothing to do with vampires, so the Kristen Stewart connection is coincidental rather than cosmic.[1]

Recommended for You
Catherine Deneuve in ‘In the Courtyard / Dans la cour,’ with Gustave Kervern and Michèle Moretti.

As the French Academy’s César Awards were created in 1975, some of Catherine Deneuve’s most remarkable early performances went nominationless. But the French film industry doesn’t quite work like the American film industry.

In other words, not infrequently women get important acting gigs even after they turn 30, 40, 50, and so on. Considering her importance in French cinema in the last (almost) six decades, it should come as no surprise that Catherine Deneuve has been consistently shortlisted for the César du Cinéma.

From 1976 (the year the first César nominations were announced) to 2015, Deneuve has garnered no less than 12 Best Actress nominations. This year, she has made history by tying with record-holder Isabelle Huppert as the performer with the most César nods in that particular category.[2]

I should add that overall Isabelle Huppert remains the actress with the most César nods, 14 in all. With 16 nominations, Gérard Depardieu holds the overall record in the acting categories. For more details, see follow-up post “Catherine Deneuve Ties César Award Record.”

‘In the Courtyard,’ Best Actress competition

In Pierre Salvatori’s comedy-drama In the Courtyard, Catherine Deneuve plays Mathilde, an elderly resident of an old Parisian apartment building. Not long after her retirement, she is befriended by the new caretaker (Gustave Kervern), a former member of a rock band. Their relationship evolves even as the mental acuity of Deneuve’s character starts showing signs of deterioration.

Catherine Deneuve’s competition for the 2015 Best Actress César consists of the following (there are seven nominees this year):

As explained above, Catherine Deneuve’s record-tying César Award feat wasn’t exactly a major surprise. But the fact that an actress best known for her connection with the Twilight movie franchise would make César history likely left many astonished.

The issue here is less Kristen Stewart’s talent as an actress than the fact that, apart from Catherine Hardwicke’s indie-ish 2008 Twilight, the Twilight Saga movies are made-to-order Hollywood product. And that the César Awards almost invariably honor French – or at least Francophone – performers.

As a result of her Best Supporting Actress nomination for Clouds of Sils Maria, Stewart has become the first female American performer to land a César nomination in three decades and the first ever in that particular category. One might add that she also happens to be the very first American film actress to be nominated for a César. 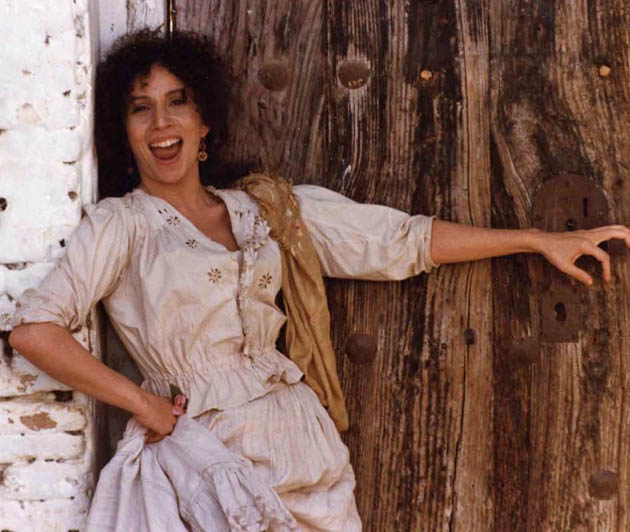 Back in early 1985, Julia Migenes (a.k.a. Julia Migenes-Johnson) was shortlisted for the Best Actress César for her performance in Francesco Rosi’s film version of Bizet’s opera Carmen, co-starring Plácido Domingo as Don José.

But unlike opera (or operetta or musical theater) singers of years past – e.g., Grace Moore, Geraldine Farrar, Jeanette MacDonald, Irene Dunne, Kathryn Grayson – Migenes was no film star. Instead, she was an opera and musical theater star who happened to be featured in a handful of films: seven in all. (That includes a cameo as Judy Garland in The Krays and the female lead in the 1984 sci-fier L’unique, co-written by Clouds of Sils Maria filmmaker Olivier Assayas.)

Carmen was Migenes’ second film appearance – and her first in a decade. In 1974, she had been featured in Václav Kaslík’s filmization of Friedrich Zell and Richard Genée’s operetta A Night in Venice / Eine Nacht in Venedig.

This may sound like splitting hairs, but Kristen Stewart is undeniably a movie star. At age 24, Stewart has more than 30 movies to her credit, while her Bella Swan in the Twilight Saga movie franchise has made her world famous.

And to date, no other American film actress has been shortlisted for a César. Stewart is the very first one.

In fact, Kristen Stewart, who hadn’t even been born at the time of Julia Migenes’ César nomination, is one of the rare Anglophone performers to have been shortlisted for a César.

Is there film life after Twilight? Yes, there is. Quite a bit.

Following a year away from the screen, Kristen Stewart returned in 2014 with no less than three productions:

In 2015, Kristen Stewart has three movies awaiting release. They are:

So far, there are no officially announced Kristen Stewart movie projects for 2016, despite rumors about her participation in Akira and Captain America: Civil War (or some other upcoming Captain America, or variation thereof). 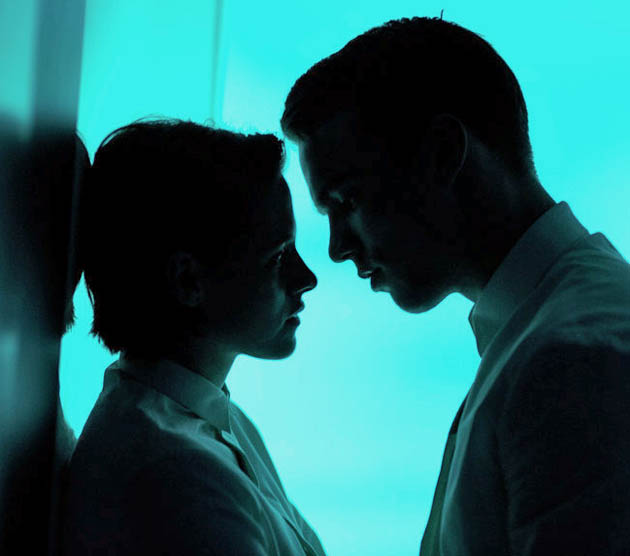 Stewart’s Twilight romantic interest, Robert Pattinson, 28, has also kept himself busy following a break away from films in 2013. Coincidentally, Pattinson was featured opposite Still Alice star Julianne Moore in David Cronenberg’s 2014 release Maps to the Stars.

And he has received the best notices of his career to date for David Michôd’s The Rover, co-starring Guy Pearce. For his efforts, Pattinson was shortlisted for this year’s Australian Academy of Cinema and Television Arts Award in the Best Supporting Actor category.

And there are three Robert Pattinson movies in the works:

Apart from a cameo in Adam Sandler’s braindead 2013 comedy Grown Ups 2, Taylor Lautner has been featured in only one movie: Daniel Benmayor’s actioner Tracers, co-starring Marie Avgeropoulos. The action drama is scheduled to open in the U.S. on March 20, ’15.

According to the IMDb, Soham Mehta’s Run to the Tide is currently in the post-production stages. In the family drama / road movie, Lautner stars as a young man who kidnaps his younger brother so they can both escape from their dysfunctional family.

Frank Coraci’s The Ridiculous 6 is currently in the pre-production stages. Co-written by Adam Sandler, the comedy Western also features Sandler and Terry Crews. Any similarities to Quentin Tarantino’s The Hateful Eight and/or The Magnificent Seven and/or any spaghetti Western Tarantino decides to rehash will in all likelihood be no coincidence.

And here’s hoping that Taylor Lautner, who will be turning 23 next Feb. 11, will one day join forces with Gus Van Sant. After all, one never knows when Van Sant may come up with another Mala Noche or My Own Private Idaho or To Die For. (Instead of another Good Will Hunting or Psycho or Finding Forrester.)

[1] In fact, The Twilight Girls’ original French title is Les collégiennes, or “The School Girls.” Its teens in heat have nothing to do with vampires, werewolves, or Stephenie Meyer. Think instead of the saucy 1936 Danielle Darrieux star vehicle Club de femmes, which ran into serious trouble with American censors.

Probably not a coincidence: the Jacques Deval-directed Club de femmes – based on Deval’s own story – was remade by Ralph Habib the year before The Twilight Girls came out. Nicole Courcel was cast in the old Danielle Darrieux role.

Twilight Saga: To Brazil or Not? + Eclipse Goes Dark

Congratulations Miss Stewart for the Caesar Award! well deserved. May you career reach the stars. You ARE A GREAT STAR ALREADY!

To lol- try to relax! They’re all indeed stars, and as a Stewart fan, I’m very appreciative that she played a role in bringing Pattinson to our attention front & center in the Twilight films. I wouldn’t have known about this sweet, cute guy if not for her and Hardwicke kind of putting him on the map a little better (though I certainly realize he had gotten roles before that). I plan to help both of their “box offices” in the future, and can only hope other film-goers are as fair. It would be cool to see them working together in something really complex and raw after they’ve both gotten some years and more experience behind them…
My congratulations to Kristen.

If KStew is a star then who are Jen Lawrence and Emma Stone?@Twilightfan14,Rob keeps improving?He was and he is good,you probably have seen him only in Twilight.This article is biased and onesided.AACTA are Australian quivalent of the Oscars but it wasn’t even mentioned and Julianne Moore won Palme d’ore for Maps to the Stars at Cannes Film Festival,Queen of The Desert is in competition at Berlin Film Festiaval,and Life with Dehaan and R.Pattinson will be showed at Berinale at Special Gala Screening again not mentioned.I don’t even know why twilight actors are compared since they all have different paths.I haven’t seen articles that compare actors from Spiderman franchise,Emma Stone,Andrew Garfield and Dane DeHaan.

Laughable. If a Cesar want to be taken seriously , they have to have actresses who can act. Kstew is an awful actress

Great article! I’m a huge Kristen Stewart fan and she so deserves this! I loved the part in this article
about Kristen getting a 2016 Oscar nod! She will win an Oscar and a Golden Globe too someday.
She’s too good not to!
Rob is a very good actor who keeps improving and has a great career ahead of him too.
I hope Taylor’s luck improves and he gets to work with great people. Abduction was good
and didn’t deserve the bad rap it got. It was a great popcorn movie and did actually MAKE
money for the studio.

Kristen’s Cesar’s Best Supporting Actress nomination is well deserved! She and Juiliette Binoche have great chemistry. Congratulations to Clouds of Sils Maria’s six nominations! Catherine Daneuve is both a legend and an icon. I also would love for her and Kristen work together. I read that Kristen is one of the younger American actors she admires. Thank you for this article.