Kristen Stewart and Daniel Radcliffe – Bella Swan and Harry Potter together at last – presented veteran production designer Rick Carter with the 2013 Academy Award for Best Art Direction for his work on Lincoln. (Jim Erickson was the film’s set decorator.) Directed by Steven Spielberg, Lincoln was in the running for 12 Academy Awards, winning only two: one for Carter and another for Best Actor Daniel Day-Lewis. Among the evening’s Lincoln losers were director Spielberg, veteran producer Kathleen Kennedy, supporting actress Sally Field, supporting actor Tommy Lee Jones, and screenwriter Tony Kushner.

Among the other Rick Carter / Steven Spielberg collaborations are Munich, A.I.: Artificial Intelligence, War of the Worlds, The Lost World: Jurassic Park, Amistad, and Jurassic Park. Carter’s collaborations with Robert Zemeckis include What Lies Beneath, Cast Away, The Polar Express, and Death Becomes Her.

Besides Bella Swan, Kristen Stewart recently played another iconic character, Snow White, in what may turn out to be the first movie in a mini-franchise, Snow White and the Huntsman, directed by Rupert Sanders, and co-starring Chris Hemsworth and Charlize Theron. Other Kristen Stewart movies include Walter Salles’ On the Road, with Garrett Hedlund and Sam Riley; Floria Sigismondi’s The Runaways, with Dakota Fanning; Greg Mottola’s Adventureland, with Jesse Eisenberg and Ryan Reynolds; and David Fincher’s Panic Room, with Jodie Foster and Forest Whitaker.

Kristen Stewart currently has three films reportedly in pre-production: Snow White and the Huntsman 2, with Chris Hemsworth, and not to be directed by Rupert Sanders for obvious reasons (no director has been announced so far); Glenn Ficarra and John Requa’s Focus, which was to have co-starred Ben Affleck, who has since dropped out of the project (no new leading man has been announced so far); and Steven Shainberg’s The Big Shoe, featuring Elizabeth Banks and Jim Sturgess.

Daniel Radcliffe became one of the highest-paid actors in the world following the phenomenal success of the Harry Potter movie franchise, which ended with David Yates’ Harry Potter and the Deathly Hallows Part 2, co-starring Emma Watson, Rupert Grint, and Ralph Fiennes, in summer 2011. Since then, Radcliffe has been seen in James Watkins’ mystery / horror thriller The Woman in Black, which became a surprising international box office hit. 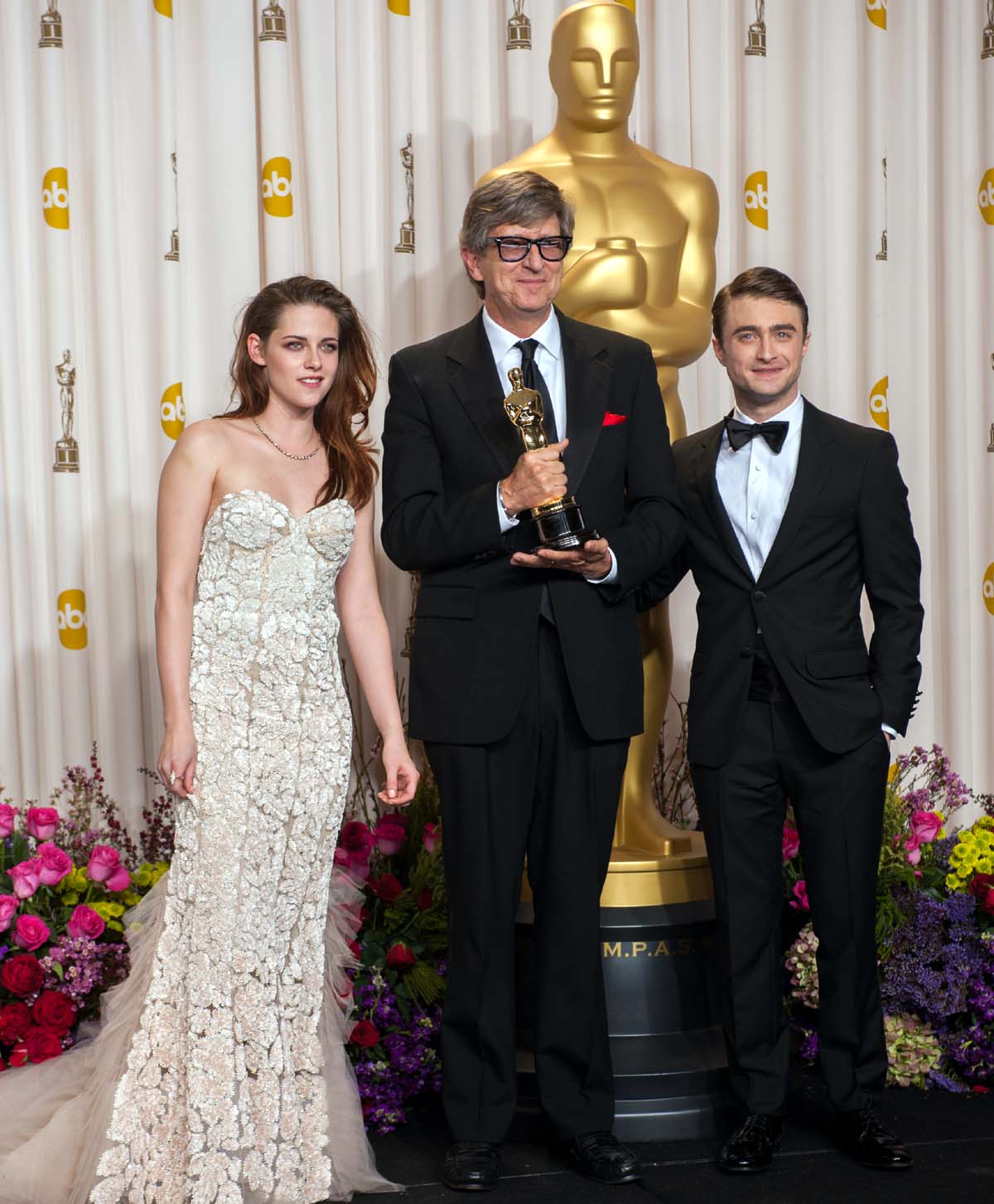 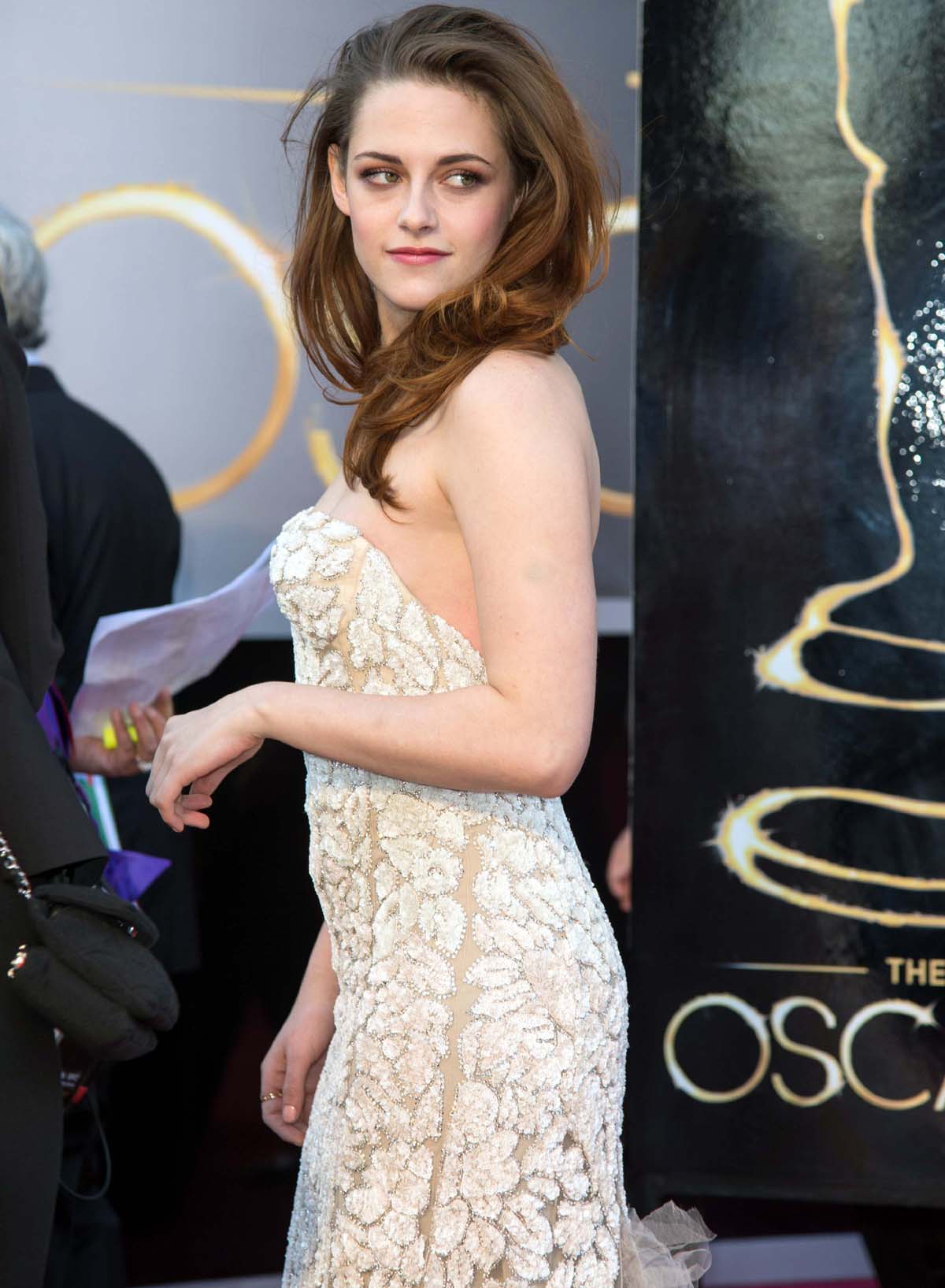 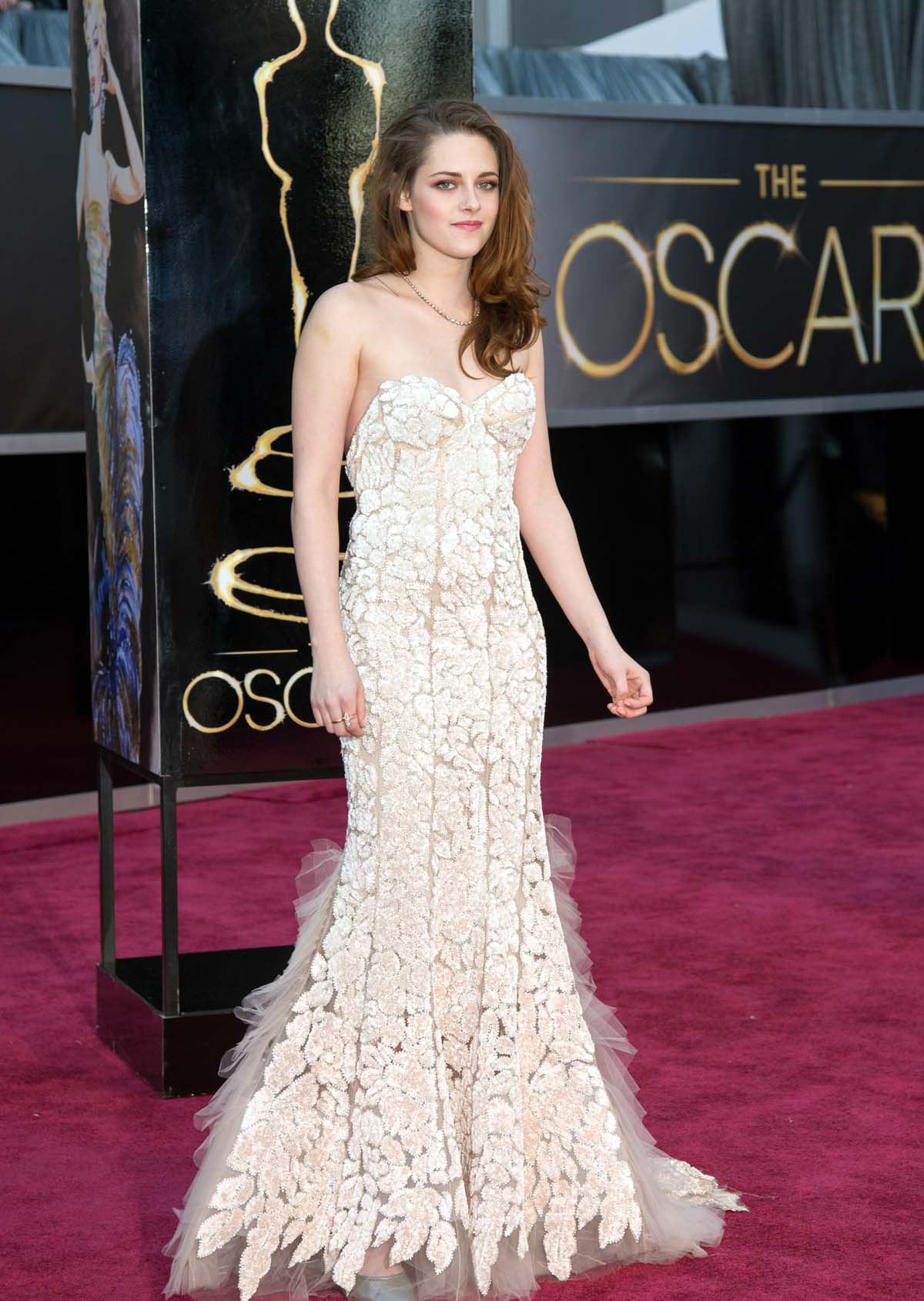 Daniel Day-Lewis with a kneeling Steven Spielberg, plus John Travolta and Kathryn Bigelow can be seen in the background.

You know you’ve made it to the top when Steven Spielberg kneels before you. In the above picture, Best Actor Oscar winner Daniel Day-Lewis is seen chatting away with his Lincoln director, Steven Spielberg. Lincoln was the evening’s most nominated film, but it ended up winning only two Academy Awards: Day-Lewis’ Best Actor and Best Production Design. Below is Day-Lewis’ Oscar acceptance speech.

Daniel Day-Lewis: “I really don’t know how any of this happened. I do know that I’ve received so much more than my fair share of good fortune in my life and I’m so grateful to the Academy for this beautiful honor. It’s a strange thing because three years ago before we decided to do a straight swap, I had actually been committed to play Margaret Thatcher. [Laughs] And Meryl was Steven’s first choice for Lincoln. And I’d like to see that version. [Presenter Meryl Streep won the Best Actress Oscar last year for her performance as Thatcher in Phyllida Lloyd’s The Iron Lady.]

“And Steven didn’t have to persuade me to play Lincoln but I had to persuade him that perhaps if I was going to do it that Lincoln shouldn’t be a musical. My fellow nominees, my equals, my betters, I’m so proud to have been included as one amongst you.

“I’d like to thank Kathy Kennedy, our producer, and through you, Kathy, and through you our mighty team of co-conspirators. At the apex of that human pyramid there are three men to whom I owe this and a great deal more: Tony Kushner, our beloved skipper Steven Spielberg and the mysteriously beautiful mind, body and spirit of Abraham Lincoln. For my mother, thank you so much.”

Lincoln producer Kathleen Kennedy, by the way, has been nominated for eight Academy Awards in the last three decades, but has never won. For the record, Kennedy’s nominations (as one of the producers of a Best Picture nominee) were for Spielberg’s E.T.: The Extra-Terrestrial (1982), with Henry Thomas and Drew Barrymore; The Color Purple (1985), with Whoopi Goldberg and Oprah Winfrey; Munich (2005), with Eric Bana and Geoffrey Rush; and War Horse (2011), Jeremy Irvine and Emily Watson; in addition to M. Night Shyamalan’s The Sixth Sense (1999), staring Bruce Willis and Joel Haley Osment; Gary Ross’ Seabiscuit (2003), with Tobey Maguire; and David Fincher’s The Curious Case of Benjamin Button (2008), with Brad Pitt and Cate Blanchett. 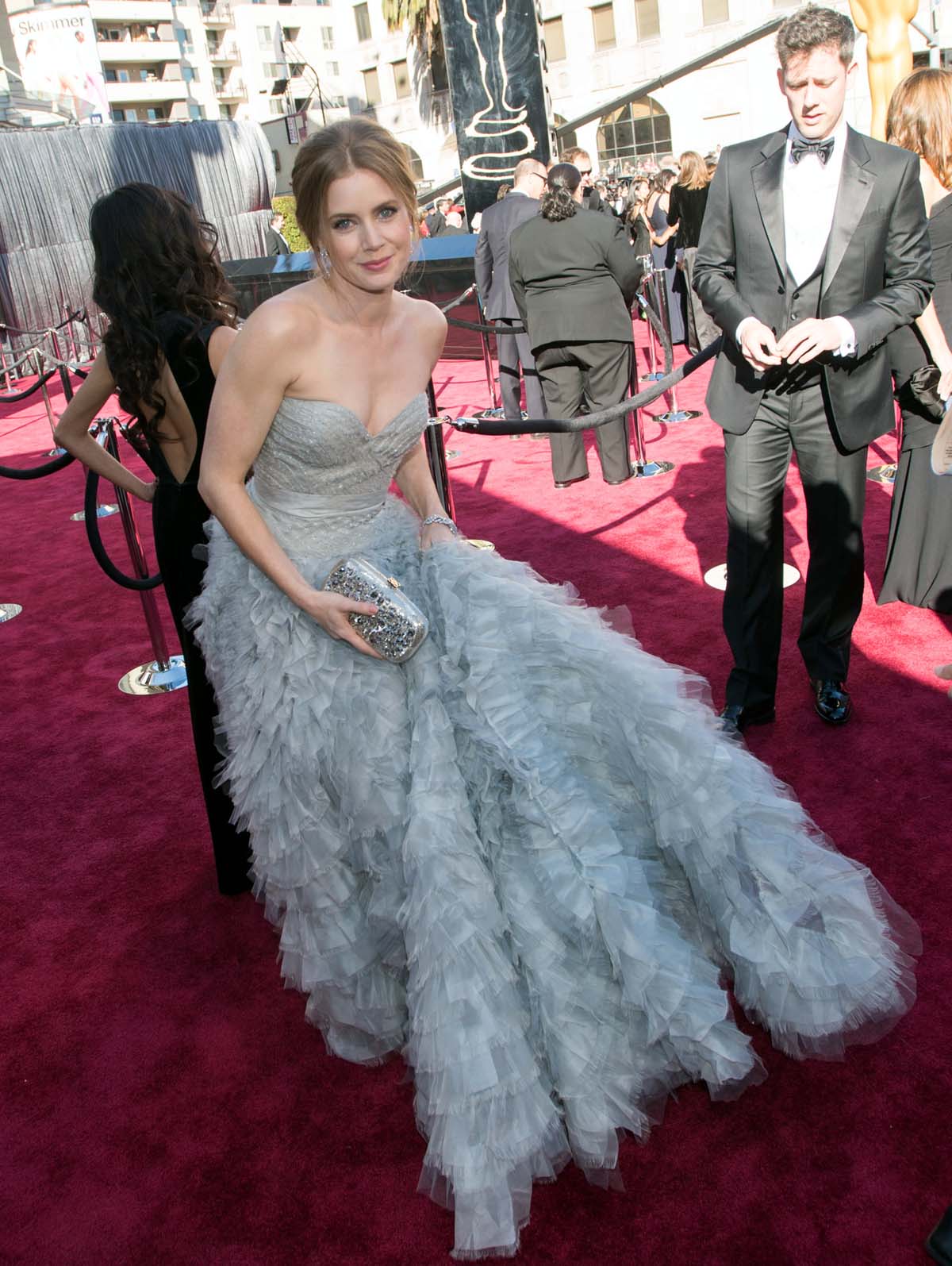 Two more Best Supporting Actress nods and Amy Adams will match Thelma Ritter’s six nominations in that category. For the record, Ritter’s nods were for Joseph L. Mankiewicz’s All About Eve (1950), Mitchell Leisen’s The Mating Season (1951), Walter Lang’s With a Song in My Heart (1952), Samuel Fuller’s Pickup on South Street (1953), Michael Gordon’s Pillow Talk (1959), and John Frankenheimer’s Birdman of Alcatraz (1962). Ritter, by the way, never won.

Best Original Music Oscar winner Mychael Danna talked to journalists about working with Ang Lee on Life of Pi while in the press room at the 2013 Oscar ceremony. In answer to a question as to what had inspired him to “combine a lot of different musical aspects” into the Life of Pi score, Danna explained that he had begun working on the film after reading the book a decade ago.

Ang Lee became involved in the project about five years ago. “And one thing we knew from the beginning,” Mychael Danna explained, “is that [Life of Pi] was going to be a big, rich picture, so there had to be, obviously, a big orchestra, a big choir.

“But we knew that we wanted to respect the culture that Pi came from, respect his sense of inclusiveness of all the world’s cultures and religions. His sense of not seeing any borders between different ways of looking at the world, that different cultures around the world have different points of view. So we wanted to respect that in the music and reflect that in the music, and so we knew right from the beginning that was our approach.

Mychael Danna also told journalists that he and Ang Lee “worked very closely for the last four months of post production” on Life of Pi, adding that both of them “would work and mold the score together.”

Mychael Danna wrapped up his q&a with reporters by saying that the Academy Award “is the biggest honor you can possibly have in this work that we do. And I’ve been working for a long time writing music for movies and to have this big group hug from my peers and from fellow filmmakers, it’s a supreme honor and it’s yeah, it’s the greatest honor of my life.”

Thank you for a professional and informative article.
There is no excuse for the electronic beating that was given
to Miss Stewart. She may never win the Oscar but that has nothing to do with
how good she is or will be. She may never be the prettiest but that doesn’t mean
she’s not beautiful. She isn’t the best dressed but she looks good wearing what she finds
comfortable. You may not win a Pulitzer but this article shows you have more integrity than
most of your colleagues .

Just reading the newspaper articles on the Oscars. Amazing how people like to tear apart performers just to make headlines. The host I think did a fine job and kept the program from being raunchy unlike some other hosts in the past. As for Zellweger she did not come across under the influence as written. She was nervous and appeared to have vision problems seeing the TelePrompTer . Stewart on the other hand ….well that girl was in pain and tried so hard to mask it. I applaud her for even showing up let alone endure utter pain. Try slicing your foot open and then have to wear a shoe which most are not designed for the human foot and walk on it yet. OUCH! This poor girl has suffered unbearable rath from everyone, yet holds her head high and forges forward. Good for her! Time the media pick on someone else. She looked lovely and very professional. Where is Rob, has he forgotten already? Shame on him, he is what he is today because of her . She helped put his name in lights.if not for her, he would be back in the UK selling cars maybe.

Kristen Stewart looked stunning . She was a real trooper and carried off her commitment with class. I’m so glad that she is trying to rise above the nasty atmosphere in Hollywood. I look forward to more of her films. As for Robert Pattinson, I hope he realizes what he has and doesnt destroy this relationship. She faught for him and helped place his name in lights. He should follow his heart and not be influenced by others including family. They did have brilliant chemistry both on the screen and off. If this relationship goes down I doubt they will ever work together again. It would be just too painful to bare. It would be freshing to hear some good news for a change regarding them . The blog sites are disgusting to say the least, especially Hollywood Life. Such fabrication of lies and contradictions. I avoid reading this site and will continue to do so in the future.