This news bit has been everywhere online, but just in case you’ve missed it: History-making César Award winner Kristen Stewart has joined three-time Oscar-nominee Michelle Williams and two-time Oscar nominee Laura Dern in an as yet untitled drama set in Montana to be directed by Kelly Reichardt.[1]

Deadline.com first broke the story last week (February 2015). If all goes as planned, Kristen Stewart will play Boise lawyer Beth, who, nervous after accepting a teaching position in a small Montana town, befriends a local woman, Jamie, auditing her class.[2]

Kelly Reichardt’s usual partners Neil Kopp and Anish Savjani are producing the project, which is supposed to consist of a series of vignettes based on short stories by Maile Meloy.

Kelly Reichardt first made her mark with Old Joy (2006). Since then, she has directed Michelle Williams in Wendy and Lucy (2008), co-starring Lucy the Dog, and in Meek’s Cutoff (2010).

Coincidentally, Eisenberg was seen opposite Kristen Stewart in Greg Mottola’s Adventureland and will once again be seen next to her in Nima Nourizadeh’s American Ultra later this year.

As for Dakota Fanning’s Kristen Stewart connection, she was a guest star – as the (quite literally) headstrong vampire Jane – in the Twilight movie sequels. Besides, Fanning and Stewart co-starred in Floria Sigismondi’s box office disappointment The Runaways. 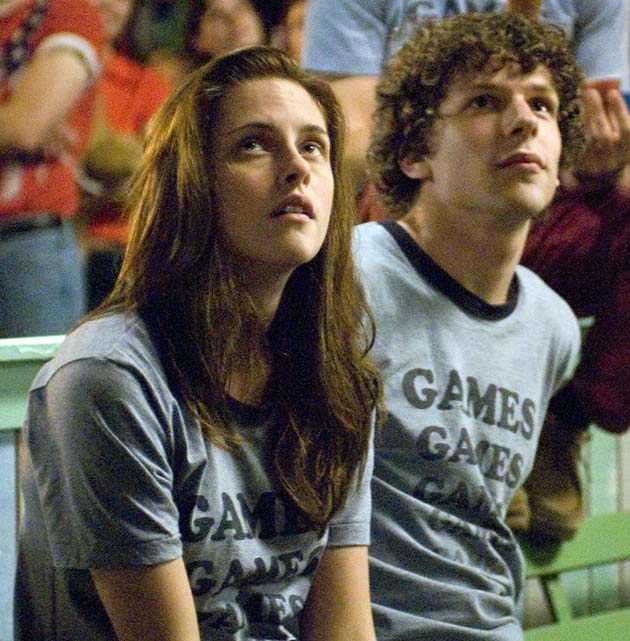 Now, Kristen Stewart has missed out on Universal’s Snow White and the Huntsman sequel-turned-prequel The Huntsman, reportedly to bring back Chris Hemsworth and Charlize Theron, in addition to cast newcomers Jessica Chastain and Emily Blunt.

But Stewart has kept herself busy all the same, focusing on independently financed fare. Besides Clouds of Sils Maria (in some markets) and American Ultra, she will next be seen in:

Kristen Stewart has been in movies for more than a decade. Previous Stewart entries include:

A Best Supporting Actress César winner for Clouds of Sils Maria, Stewart became the first U.S. actress to take home the award. (Back in early 2003, Adrien Brody became the first American actor to win a César, for Roman Polanski’s The Pianist.)

[1] Michelle Williams’ three Academy Award nods were for the following:

[2] Set in Logan, Montana, a Maile Meloy story titled “Travis, B.” revolves around a young, lonely, ethnically mixed cowboy and polio survivor, Chet, who falls for an out-of-town attorney, Beth Travis, on a temporary gig as a teacher.

That sounds like the vignette to feature Kristen Stewart, except for the female class auditor – which could well be a reporting or publicity error. Or perhaps there will be a gender switch in the movie adaptation, with the cowboy turned into a cowgirl.

The 2009 Maile Meloy short-story compilation Both Ways Is the Only Way I Want It, which may be the basis for Kelly Reichardt’s film project, features “Travis, B.”