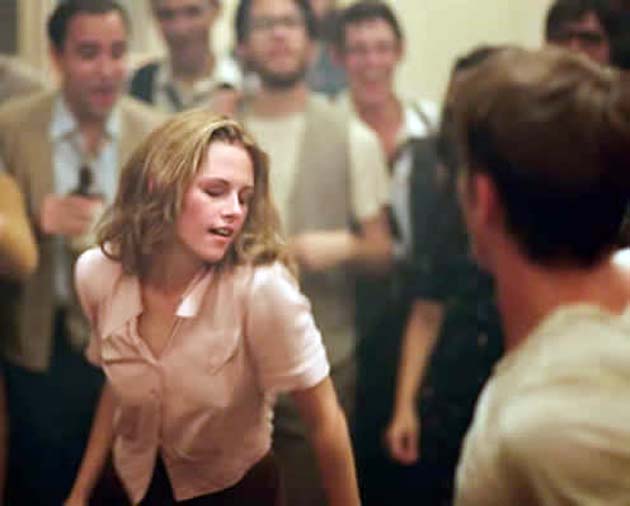 Down memory lane: Garrett Hedlund and Kristen Stewart On the Road images

At the time best known as The Twilight Saga‘s conflicted human Bella Swan, Kristen Stewart was cast as the exuberant Marylou in Walter Salles’ film adaptation of Jack Kerouac’s iconic 1950s novel On the Road. Salles had been impressed with Stewart’s (pre-Twilight) work in Sean Penn’s Into the Wild.

Based on LuAnne Henderson, Kerouac’s close buddy Neal Cassady’s first wife, Marylou is described as a “beautiful little sharp chick.” Apparently, one who also likes to move seductively to the sound of music – as can be attested by the Kristen Stewart picture above, which first came out online in early 2011.

Besides Stewart, On the Road also features Garrett Hedlund as Dean Moriarty, the character based on the sexually fluid social outsider Neal Cassady, and British actor Sam Riley as Sal Paradise, a fictionalized version of Jack Kerouac himself.

At the time, Hedlund was best known for TRON: Legacy, while the Leeds-born Riley had won several accolades for his performance as Joy Division vocalist Ian Curtis in Anton Corbijn’s Control (2007), including the British Independent Film Award for Most Promising Newcomer.

‘On the Road’ director and adapter

On the Road director Walter Salles became internationally known following the 1998 release of the Brazilian drama Central Station, which was eventually shortlisted for the Best Foreign Language Film Academy Award. Besides, the film’s star – stage, screen, and television veteran Fernanda Montenegro – was an Oscar nominee in the Best Actress category.[1]

On the Road screenwriter José Rivera had previously collaborated with Salles on the director’s generally well-regarded road movie The Motorcycle Diaries (2004), for which Rivera earned an Oscar nomination.[2]

The On the Road storyline is a simple one: New York-based writer Sal, the rebel Dean, and Dean’s girl, Marylou, go on a cross-country road trip following the death of Sal’s father. The film’s drama stems from the characters’ interpersonal relationships.

On the Road began shooting in summer 2010 in New Orleans and Montreal. It premiered at the 2012 Cannes Film Festival, where it received mixed notices.

Distributed by IFC Films in the United States, the (reportedly) $25 million-budgeted On the Road was major box office flop despite an earlier restructuring of its narrative for the American market.

The road movie fared better in France, where it opened at the time of the Cannes Film Festival, Italy, and Brazil, director Salles’ native country – and where Kristen Stewart has a huge following.

Check out: On the Road a target="_blank" href=”https://www.altfg.com/film/on-the-road-again/”>trailer.

Kristen Stewart in ‘On the Road,’ with Garrett Hedlund and Sam Riley.

‘On the Road’ movie cast:

A curiosity: Also back in early 2011, Kristen Stewart had her name linked to what would eventually become Zack Snyder’s Man of Steel.

According to the rumors – the original source seems to have been the tabloid New York Daily News – Stewart was to play Lois Lane opposite Henry Cavill’s Clark Kent a.k.a. Superman, but turned down the role much to Snyder’s frustration.

However, according to a People article about the matter, the actress’ rep denied Stewart was ever invited to play Lois Lane: “There are a number of fabricated stories circulating. The fact is that she has not met on this film nor has she been approached for this film.”

Besides Kristen Stewart, a whole array of young actresses were rumored as potential Lois Lane contenders:

It makes you wonder how the likes of Emma Watson and Emma Stone failed to be included in the list.

Needless to say, the role of Lois Lane ultimately went to On the Road featured player and multiple Academy Award nominee Amy Adams – whose name, as you may have noticed, is not to be found in the above paragraph.[3]

Adams should next be seen as Lois Lane in the much ballyhooed Batman v Superman: Dawn of Justice (2016), co-starring Henry Cavill and Ben Affleck, and in the already announced The Justice League Part One, to come out in 2017.

Also worth noting is that, somewhat cosmically, Superman Henry Cavill was Twilight Saga author Stephenie Meyer’s first choice for the role of Edward Cullen. Or perhaps that was no cosmic coincidence. Maybe someone just had to come up with a story about Bella Swan playing opposite the Edward Cullen That Never Was.[4]

Kristen Stewart ‘On the Road’ photo: First image to come out.

Kristen Stewart roles that never were

A couple of other rumored high-profile roles back then that Kristen Stewart never got to play – in case she was ever truly considered for them – were:

One high-profile project that Kristen Stewart did land was Snow White and the Huntsman, a mammoth-budgeted fantasy that performed decently (in relation to its cost) at the worldwide box office. Rupert Sanders directed Stewart, Chris Hemsworth (replacing Viggo Mortensen), Charlize Theron, and Sam Claflin.

[3] So far, Margot Kidder remains cinema’s most celebrated Lois Lane, having starred opposite Christopher Reeve in four Superman movies from 1978 to 1987.

And here’s a list of Amy Adams’ Academy Award nominations; the first four nods in the Best Supporting Actress category:

[4] In case you’ve been gone from Planet Earth in the last few years, Robert Pattinson played Edward. Taylor Lautner was cast as his rival, the werewolf a.k.a. shapeshifter Jacob Black.

“Kristen Stewart On the Road Movie Images, Old Lois Lane Rumors” is a fully revised and expanded edition of a post originally published in Feb. 2011.

On the Road cast information via the IMDb.

Twilight Saga: To Brazil or Not?

interesting choices. I didn’t see Kristen as Mary Lou initially, but this picture certainly looks promising. i think sam riley as jack’s alter ego is inspired though. Garrett looks the part as well.