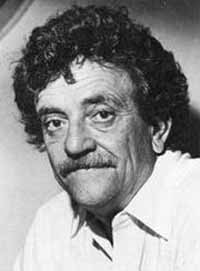 Satirical novelist Kurt Vonnegut Jr, author of the bestselling anti-war novel Slaughterhouse-Five, died Wednesday, April 11. According to his wife, photographer Jill Krementz, Vonnegut had suffered brain injuries after a fall at his Manhattan home weeks ago.

The Indianapolis-born (on Nov. 11, 1922) author, a “fourth-generation German-American religious skeptic Freethinker,” wrote about 25 novels, in addition to numerous short stories, essays, and plays, some of which were banned and burned by the anti-freethinking crowd. For his anti-censorship efforts, the American Humanist Association (website) made Vonnegut its honorary president.

Slaughterhouse-Five, Vonnegut’s most famous novel, was turned into a movie in 1972. Directed by George Roy Hill and adapted by Stephen Geller, the film won the jury prize at the 1972 Cannes Film Festival, while Hill and Geller were nominated for, respectively, the Directors Guild of America and the Writers Guild of America awards.

The novel, which came out during the Vietnam War, follows a certain Pvt. Pilgrim (played by Michael Sacks in the film version), who comes “unstuck in time” after being abducted by aliens from the planet Tralfamadore. Pilgrim had just survived the 1945 Allied firebombing of Dresden, which incinerated tens of thousands of people. Vonnegut, in fact, was in Dresden at the time of the Allied attack. His novel was named after an underground meat locker inside which he and other prisoners of war survived while huddling together. (In his 1991 tome Fates Worse Than Death: An Autobiographical Collage of the 1980s, Vonnegut claims that “the firebombing of Dresden explains absolutely nothing about why I write what I write and am what I am.”)

Among other Vonnegut works transferred to the screen were the comedy-drama Happy Birthday, Wanda June (1971), starring Rod Steiger, Susannah York, and Don Murray, and directed by Mark Robson from Vonnegut’s own adaptation of his play; the sociopolitical drama Mother Night (1996), directed by Keith Gordon, and starring Nick Nolte as a former World War II spy suffering the consequences of his double identity in Robert B. Weide’s adaptation of Vonnegut’s novel; and writer-director Alan Rudolph’s comedy Breakfast of Champions (1999), featuring Bruce Willis, Albert Finney, Nick Nolte, and Barbara Hershey in this adaptation of another Vonnegut novel.

Having suffered from severe depression for many years, in 1984 Vonnegut attempted suicide by combining pills with alcohol – and later made fun of his failure. “I will say anything to be funny,” he wrote in Fates Worse Than Death. “Often in the most horrible situations.”

In recent years, he was an open critic of the buffoons in the George W. Bush administration, calling them “upper-crust C-students who know no history or geography.”

Vonnegut was also worried about the fate of the planet. He once suggested what should be humankind’s last words, to be carved into a wall on some place like the Grand Canyon so they could be spotted by “flying-saucer creatures or angels or whatever”:

“We probably could have saved ourselves, but we were too damned lazy to try very hard … and too damn cheap.”