Andre Soares 12 years ago
Easier with Practice with Brian Geraghty and Kel O’Neill. 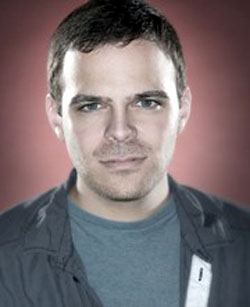 Easier with Practice, Kyle Patrick Alvarez’s feature-film debut based on an autobiographical article written by Davy Rothbart for GQ, has been getting some pretty good buzz. This psychological drama about human connections in the early 21st century has won the Grand Jury Award at CineVegas and the Best New International Feature Award at the Edinburgh Film Festival, in addition to receiving two Spirit Award nominations: Best First Feature Film and Someone to Watch Award (for Alvarez, photo).

Easier with Practice stars The Hurt Locker‘s Brian Geraghty as Davy Mitchell and Redacted‘s Kel O’Neill as Davy’s younger brother Sean, who set out on a road trip to promote Davy’s as yet unpublished novel. While at a motel, Davy gets a phone call from an unknown named Nicole. The two quickly develop a phone relationship chiefly based on sex, but things take an unexpected turn after Davy decides he wants to meet the person at the end of the line.

Reviews have generally been enthusiastic for Easier with Practice, which opens in Los Angeles at the Laemmle Sunset 5 (in West Hollywood) and New York at the Quad Cinema on Friday, Feb. 26.

“One doesn’t usually associate the words ‘tender’ and ‘affecting’ with the topic of phone sex,” Michael Rechtshaffen said in The Hollywood Reporter, “but such is the case with Easier with Practice, an unexpectedly stirring first feature by Kyle Patrick Alvarez about the challenges of making human connections in the weird and wired 21st century.”

In Variety, Justin Chang remarked that Easier with Practice is “distinguished by a fine central performance from Brian Geraghty and a profound sensitivity to the awkwardness and alienation often felt by the ostensibly tougher sex,” while at Cinematical Eric D. Snider wrote that “it’s a rarity for a director’s first film to be as confident and effective as Easier with Practice is. And for any film, let alone a debut, to address difficult subjects with this much insight, humor, and humanity is almost miraculous. There are filmmakers who couldn’t produce something this good on their tenth try, and here Kyle Patrick Alvarez has done it right out of the gate.”

Filmmaker Kyle Patrick Alvarez has kindly agreed to answer a few questions (via e-mail) about the making of Easier with Practice. See below.

What about Davy Rothbart’s autobiographical GQ article made you decide to adapt it into a movie?

I just really love the way he took this lurid story of having a phone sex relationship and told it through a voice that had honesty and sincerity and humility. It wasn’t about being explicit or risque as it was about being a human story. I just thought that angle was new and fresh, and I could see it working as a film right away, even against the narrative troubles of having extended scenes of someone talking on the phone.

Did the film version stick closely to the original, or …?

The general story of it is the same in terms of where it starts and where it goes, but I always intended to make the story my own in terms of characters. So, while Davy does have a brother in real life, his brother is nothing like the one in the film. I tried to free myself from feeling obligated to be ‘true’ and instead just make the best movie I could. The first and third acts are from the article, but the middle chunk of the film is almost entirely fabricated.

The casting of Brian Geraghty and Kel O’Neill as the two brothers in Easier with Practice. What about those actors made them right for their roles?

Casting was really tough on the movie, we saw about 200 guys for the lead but as soon as I met Brian I knew he’d be right; it was just a gut instinct. I’d really liked his performance in Jarhead and he just has this great knack for playing sincere and likable characters. I could’ve never known how committed and amazing he would be to work with. I can’t imagine this film without him!

Kel, I had seen in a really small performance in Stephanie Daley, but I was totally blown away. I think he has this great intensity and intelligence to him.

The phone sex moments are quite explicit in terms of both dialogue and body language. What was it like to get Brian Geraghty to bare all – figuratively speaking – to become his character in those scenes?

I think since it was always there in the script, any actor would’ve had to be prepared for it. Funny enough, it was the scene Brian and I talked the least about, probably just out of general uncomfortability. We never rehearsed it. He told me he was okay and set with it, so I trusted him. We shot it in our third week, so I think we were all pretty comfortable with each other, which helped, but there’s no way around it: it can be really uncomfortable! The payoff of the scene working so well was worth it, though.

Some would say that phone sex – or computer sex or any form of “long-distance” sexual and/or emotional relationship – is both undesirable and antisocial. Would you say Easier with Practice validates that claim? What’s your personal take on such relationships?

I hope it both validates that claim and criticizes it. I read this statistic once that most teenagers were saying things to each other online that they would’ve never said to each other in person. There’s a push and pull. In one sense, people are being more honest, but we are pulling away from traditional relationships. I hope the movie complements that idea – that Davy does get something good out of his relationship with Nicole and is changed by it, regardless of where it ends.

Any new projects in the works?

YES. I’m working hard on a number of things right now, but I’m keeping them secret for the time being. One is a project that is a dream for me, another adaptation. I’m also attached to a great script a friend of mine wrote and I’m working on writing a female ensemble drama. Lots going on, I hope!