(See previous post: “‘Cat People’ 1942 Actress Simone Simon Remembered.”) In the late 1930s, with her Hollywood career stalled while facing competition at 20th Century Fox from another French import, Annabella (later Tyrone Power’s wife), Simone Simon returned to France. Once there, she reestablished herself as an actress to be reckoned with in Jean Renoir’s La Bête Humaine.

An updated version of Emile Zola’s 1890 novel, La Bête Humaine is enveloped in a dark, brooding atmosphere not uncommon in pre-World War II French films. Known for their “poetic realism,” examples from that era include Renoir’s own The Lower Depths (1936), Julien Duvivier’s La Belle Équipe (1936) and Pépé le Moko (1937), and particularly Marcel Carné’s Port of Shadows (1938) and Daybreak (1939).[11]

This thematic and visual approach to cinematic storytelling – shady and/or tortured characters (at least one of them usually played by Jean Gabin); plot turns caused by fateful and/or tragic incidents; gloomy, melancholy use of black and white – were direct precursors of American film noir, including the Jacques Tourneur-Simone Simon collaboration Cat People.

La Bête Humaine, for one, has more than a few elements in common with two celebrated James M. Cain novels that would be filmed in Hollywood in the ’40s: The Postman Always Rings Twice and Double Indemnity.[12]

In a somber railway station, the child-like siren Séverine Roubaud (Simone Simon) would rather spend her time with virile engineer Jacques Lantier (Jean Gabin) than with her unattractive (and murderous) station-master husband (Fernand Ledoux). Séverine tries to lure Jacques into killing her husband, but ends up being murdered herself.

“Her Séverine was unforgettable,” Jean Renoir would later say.

Following their critically and financially successful collaboration, Renoir wanted Simon to play the female lead – written specifically for her – in what was to become his masterwork, The Rules of the Game (1939). However, as Célia Bertin explains in Jean Renoir: A Life in Pictures, the director-producer couldn’t meet Simon’s salary demands.

According to online reports, Simon demanded to be paid an amount that constituted one-third of the film’s budget. As a result, Renoir opted instead for the less expensive – and less seductive – Austrian-born actress Nora Gregor. 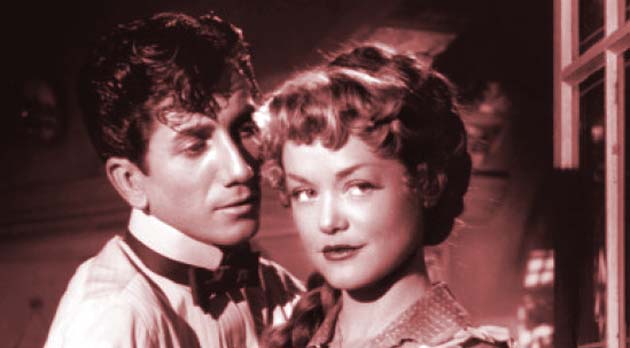 Michel Simon and Claude Dauphin, each playing three roles over the course of several centuries, co-starred. Simon, as Dauphin’s love interest, was featured in the 1839 segment.

Five years after Love Cavalcade, the end of World War II coincided with the end of Simon’s second less-than-satisfying Hollywood sojourn and her second return to France. In the ensuing decade, she would appear in 11 more films in several European countries.

Most notable among these were Pétrus, Temptation Harbor, The Pit of Loneliness, and two all-star efforts for German director Max Ophüls: La Ronde and Le Plaisir.

Also worth mentioning is an unusual and little-known Simone Simon film released at that time: Géza von Radványi’s drama Women Without Names (1950).

Set in Italy in the aftermath of World War II, Women Without Names featured Simon as a resident of a camp for displaced women. Her character, Yvonne Dubois, will do anything to get out of the place – even if that means marrying an Albanian ice-cream vendor.

Simone Simon’s other movies of the 1950s were minor efforts. In 1954, she was seen in two productions: A Double Life and The Three Thieves.

Directed by Victor Vicas, the former was a French-West German release based on Jean Giraudoux’s play Siegfried, the story of an amnesiac French soldier who becomes a German national leader. Michel Auclair, Barbara Rütting, and Bernhard Wicki co-starred.

In Lionello De Felice’s The Three Thieves, starring Italian comedy icon Totò and Jean-Claude Pascal, Simon played the unfaithful – and about to be blackmailed – wife of industrialist Gino Bramieri. (According to online sources, one scene showing Simon in petticoats while sprawled in bed was cut by Italian censors.)

Six years later, she was back on the big screen in a key supporting role in Michel Deville’s The Woman in Blue (right). Starring Michel Piccoli, Lea Massari, and Michel Aumont, the comedy-drama turned out to be Simone Simon’s final film appearance.

Coincidentally, Marc Allégret died at age 72 in November of that year.

In 1980, she was one of many international film personalities present at the César Awards ceremony.

Years later, she reportedly refused to be interviewed on camera for a made-for-television documentary about Jean Renoir (probably the two-part special aired in 1993). Her reason was that she was “a very old woman.”

Simone Simon never married. But as reported by Tom Vallance in her The Independent obituary, at around the time Cat People 1942 came out she was romantically involved with Serbian “double agent” Dusko Popov (a.k.a. Dusan Popov), who was then working for the British Security Service (a.k.a. MI5).

Both Simon and Popov, one of the often-cited real-life inspirations for Ian Fleming’s James Bond, were under the watch of J. Edgar Hoover’s FBI.

As found in declassified records from the United Kingdom’s Public Records Office, Simon loaned £10,000 to Popov in late in 1942. He then left for Lisbon, and the couple split up the following year. Vallance adds that Simon seemingly never recovered the loan.

The following decade, she became the companion of (married) millionaire French banker and racehorse breeder Alec Weisweiller. That coincided with her retirement from films.

Simone Simon: ‘One of the most seductive and most brilliant’ French film stars (image: 1942 ‘Cat People’ actress Simone Simon)

After quitting show business, Simone Simon devoted her time to drawing and sculpting. She died of “natural causes” at age 94 on the night of Feb. 22, 2005, in Paris.

At the time of her death, French Minister of Culture Renaud Donnedieu de Vabres issued a statement extolling Simon’s “charm, her irresistible smile. … With Simone Simon’s passing, we have lost one of the most seductive and most brilliant stars of the French cinema of the first half of the 20th century.”

Also interviewed was Carole Weisweiller, daughter of Simon’s lover Alec Weisweiller and his wife Francine, who was a close friend and patron of Jean Cocteau and Yves Saint Laurent.

Note: Some of the citations below refer to part 1 of this two-part Simone Simon article.

[1] According to various online sources, including the IMDb, Simone Simon also had an undetermined role in Le voleur, in which Jean-Pierre Aumont becomes involved with married woman Madeleine Renaud. This 1933 release was directed by Maurice Tourneur, father of Cat People director Jacques Tourneur.

Also, here are the original titles of Simone Simon’s French films of the 1930s mentioned in part 1 of this article:

As found on the IMDb, besides The Unknown Singer Simon had bit roles in three other 1931 releases:

[2] Rita Hayworth was known at the time as Rita Cansino. After replacing Simone Simon, Cansino ended up getting replaced by the already well-established Barbara Stanwyck in A Message to Garcia (1936).

In Frank Lloyd: Master of Screen Melodrama, author Anthony Slide explains that “as reported in the New York Times … on the [Under Two Flags] set, whenever anything unpleasant occurred, Simon would place a thermometer in her mouth and claim a temperature of 105.”

At the time Simon was fired from the film, 20th Century Fox publicly asserted that she had to be replaced due to illness. Temperature of 105 or no, her footage had to be scrapped.

Lloyd’s of London ultimately paid the studio $115,000 for a release to all claims related to Simon’s dismissal and the hiring of the costlier Claudette Colbert.

Other roles Simone Simon lost to other actresses during her 20th Century Fox stint included those in the following movies:

The source for Simone Simon losing a lead role in Suez is Paul Harrison’s 1937 Pittsburgh Press article “Idle Simone at Last Is Given Role,” which is cited on Wikipedia. Loretta Young played the other female lead in the 1938 release starring Tyrone Power.

[3] No official Academy Award nominations were announced for the period 1928-29, but Academy of Motion Picture Arts and Sciences records indicate that certain films, performers, etc. were “considered” for the award.

Ruth Chatterton for Madame X, Jeanne Eagels for The Letter, Betty Compson for The Barker, Bessie Love for The Broadway Melody, and Corinne Griffith for The Divine Lady were all unofficial Best Actress contenders. Mary Pickford was that year’s official Academy Award winner for Coquette.

[4] As found in the AFI notes about this RKO production, All That Money Can Buy was the film’s initial release title. Alternate titles during various stages of production – and even after the film’s release – were A Certain Mr. Scratch, Here Is a Man, Daniel and the Devil, and, ultimately, The Devil and Daniel Webster.

[4a] Later retitled Shortcut to Happiness, Alec Baldwin’s troubled version of The Daniel and Daniel Webster was (barely) released in the U.S. in 2007. Baldwin, whose directing credit read “Harry Kirkpatrick,” also starred as Jabez Stone, alongside Anthony Hopkins as Daniel Webster and Jennifer Love Hewitt as the Devil.

There’s no devil’s handmaiden in Shortcut to Happiness, though Kim Cattrall’s editor bears some similarity to Belle.

[4b] Despite Simone Simon’s assertion that James Craig was a newcomer at the time he was featured in The Devil and Daniel Webster, Craig had been appearing in Hollywood movies – mostly in bit parts – since 1937.

Also, I could find no corroboration for Simon’s other assertion – that James Craig was a football player.

Back in the early 1910s, there had been an All-American football halfback and quarterback named Jimmy Craig, who played with the University of Michigan Wolverines. However, it’s highly unlikely that Simon was familiar with him.

[5] Starring Dana Andrews, Peggy Cummins, and Niall MacGinnis, Jacques Tourneur’s British-made Curse of the Devil was also known as Night of the Devil.

In Hollywood since the mid-’30s, Tourneur had previously worked with Val Lewton on MGM’s Jack Conway-directed 1935 release A Tale of Two Cities, starring Ronald Colman. The future Cat People collaborators were “arrangers of the revolutionary sequences.”

[5a] Nicholas Musuraca was responsible for the cinematography of Boris Ingster’s B crime drama Stranger on the Third Floor, a 1940 RKO release that some single out as Hollywood’s first “official” film noir.

Cat People profit figure via Richard B. Jewell and Vernon Harbin’s The RKO Story. Adjusted for inflation, the film’s $183,000 profit would be equivalent to approximately $2.5 million in 2015.

[8] Minus the alias inspired by Simone Simon’s 1942 Cat People character, Irena Dubrovna, actresses who have played Catwoman on the big screen are:

An official film version of Maupassant’s tale was released in 1945, the year after Simone Simon’s Mademoiselle Fifi came out in the U.S. Directed by Christian-Jaque, the quite enjoyable, French-made Angel and Sinner / Boule de Suif starred Micheline Presle.

[11] Below is a list of original titles of movies mentioned in part 2 of this Simone Simon article, including a listing of key cast members not referenced in the main text:

Emile Zola’s novel would get an official Hollywood version in 1954, when Fritz Lang directed Glenn Ford, Gloria Grahame, and Broderick Crawford in Human Desire. The film was not well received.

[13] Four years after directing Simone Simon in Pétrus, Marc Allégret would test a teenage Brigitte Bardot for a role in a film based on Édouard Dujardin’s novel Les lauriers sont coupés.

The Allégret movie was never made, but his assistant, Roger Vadim, would marry Bardot (1952-1957) and develop her “sex kitten” public image in movies such as …And God Created Woman / Et Dieu… créa la femme (1956) and The Night Heaven Fell / Les bijoutiers du clair de lune (1958).

Marc Allégret would eventually get the chance to direct Bardot in School for Love / Futures vedettes (1955) and Plucking the Daisy / En effeuillant la marguerite (1956).