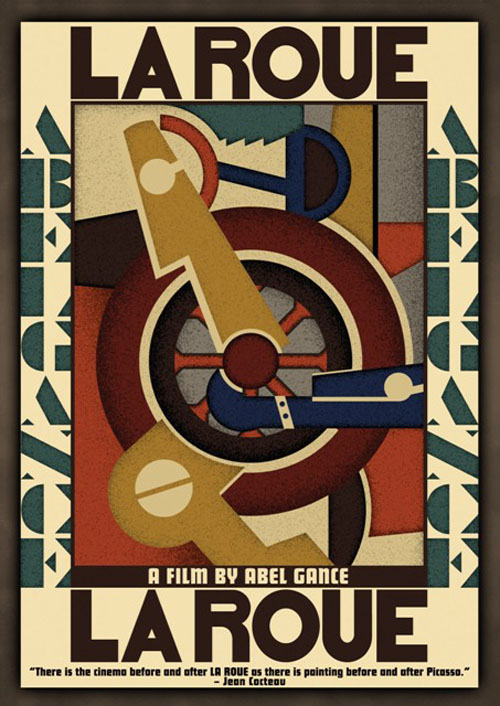 That’s none other than Jean Cocteau, referring to the mammoth 1923 drama (original running time: nearly 8 hours) directed and written by Abel Gance – he of Napoleon.

Gance worked for three years on La Roue / The Wheel, which revolves around a locomotive engineer (Séverin-Mars, who died in 1921, two years before the film’s official release), his obsession with his adopted daughter (Ivy Close, mother of director Ronald Neame), and her (romantic) love for the engineer’s son (Gabriel de Gravone), who also happens to have fallen in love with her.

The director and his cinematographers (Gaston Brun, Marc Bujard, Léonce-Henri Burel, and Maurice Duverger) worked on all sorts of innovative cinematic experiments; as a result, the film’s technical virtuosity became a blueprint for numerous other productions. G.W. Pabst, for one, was encouraged by La Roue to begin his own explorations of human psychology in classics such as Pandora’s Box and Diary of a Lost Girl, while Akira Kurosawa once stated that “the first film that really impressed me was La Roue.”

Well, you can check for yourself on May 6, when Jeff Masino’s Flicker Alley, described as “a specialty supplier of fine silent films and classic cinema programming,” will be releasing a 2-DVD set (US$$39.95) of the restoration of Gance’s classic.

And if you’re in a real hurry to find out what Cocteau’s fuss was all about, Turner Classic Movies will be showing La Roue on April 27 at 11 pm Eastern Time.

As per the Flicker Alley press release, “this marks the first occasion that this essential film has received distribution in the United States, and is the first home video edition to be released anywhere in the world.”

Following its initial release, the 32-reel La Roue was soon shortened to 12 reels. According to the release, “this new restoration, produced by Eric Lange, David Shepard and Jeff Masino with invaluable support from Turner Classic Movies, began with a 35mm master positive of this 12-reel version, a Russian print of an 8-reel version, two incomplete tinted nitrate prints of a longer French version, and finally, for two short but critical scenes, a 4-reel abridged version released by Pathé on 9.5mm for home movie screening. Conflating all of this material, the Lobster Film Studios restoration team headed by Eric Lange was able to prepare and digitally restore a 20-reel version, by far the most complete edition of La Roue seen anywhere since 1923. This release possesses exceptional pictorial quality and English titles that use the type font and moving photographic backgrounds of the original film.”

The DVD set includes a new symphonic score composed and conducted by Robert Israel, a short film by poet Blaise Cendrars showing the film’s production work, plus a booklet containing an essay by William M. Drew on the history and impact of La Roue, and comments by Israel on his music score.

La Roue is the fourth DVD title to be released under the Flicker Alley-Film Preservation Associates production and distribution agreement, following “Discovering Cinema,” “Saved from the Flames,” and “Georges Méliès: First Wizard of Cinema (1896-1913).”