Lynda Carter, TV’s former Wonder Woman, tells the Rupert Murdoch tabloid New York Post that she has never used the Wonder Woman Lasso of Truth on her two children. “I don’t think it would work on them,” the 56-year-old actress explains, adding, “But I’ve often thought how nice it would be during this administration if [the Lasso of Truth] worked.” The “administration” in question being that of George W. Bush’s White House.

“I don’t really care who the president has sex with,” Carter continues. “But I do care about being lied to about important things. Lie to me about sex – everyone lies about who they have sex with. It’s not about war and killing people.'”

Perhaps the Lasso of Truth would force Bush and his cohorts to reveal the facts about shady presidential directives, among other spooky things.

Anyhow, the purpose of the Lynda Carter interview is to promote her New York cabaret act that debuts tomorrow night, October 30, 2007, at Feinstein’s at Loews Regency.

Although best known for her tightly garbed Wonder Woman in the campy ’70s TV series, the Phoenix, Arizona, native Lynda Carter (born on July 24, 1951) has been featured in a handful of movies as well. Curiously, most of those came out this century, e.g., Mike Mitchell’s Sky High, with Michael Angarano, Kurt Russell, and Kelly Preston; Jay Chandrasekhar’s The Dukes of Hazzard, with Seann William Scott and Johnny Knoxville; and Neill Blomkamp’s intriguingly titled short Tempbot.

Lynda Carter currently lives with her family in Washington, D.C. 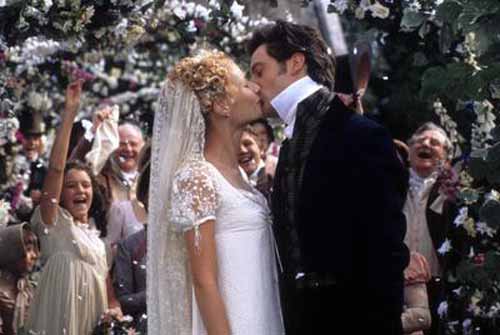 Period Costumes for the Screen: From the Collection of Cosprop, London

Thirty-six movie costumes, including Oscar-nominated designs created for Meryl Streep in Out of Africa (below), Gwyneth Paltrow in Emma (above), Nicole Kidman in The Portrait of a Lady and Cate Blanchett in Elizabeth, will be presented in the upcoming exhibition, “Period Costumes for the Screen: From the Collection of Cosprop, London,” opening on Friday, October 19, in the Academy of Motion Picture Arts and Sciences’ Fourth Floor Gallery in Beverly Hills. Admission is free.

As per the Academy’s press release, the exhibition “will highlight the collaboration between motion picture costume designers – including Milena Canonero, Ruth Myers, Janet Patterson, and Alexandra Byrne, each of whose creations are mentioned above – and costume houses by featuring an impressive sampling from Great Britain’s Cosprop. Costume houses such as Cosprop provide offices, research facilities, historic and modern costume stock, and expert manufacturing facilities, thereby acting as the creative hub of the costume design community.

“Showcasing dozens of costumes, photo murals and film clips that put the costumes into their cinematic context, the exhibition will highlight designs created for motion pictures set in the 16th through mid-20th centuries. While period authenticity can contribute greatly to the believability of a story, the first creative challenge is for the costumes to fit the overall design of the film.”

Founded in 1965 by costume designer John Bright, Cosprop was involved in the creation of Bright’s and Jenny Beavan’s Academy Award-nominated costumes for Sense and Sensibility and their Oscar-winning designs for A Room with a View. Cosprop also collaborated with three-time Academy Award winner James Acheson on his Oscar-winning designs for Dangerous
Liaisons, and with Deborah L. Scott’s Oscar-winning work on Titanic. (Right: Drew Barrymore wearing a Jenny Beavan costume in Ever After.)

This exhibition is organized by the Trust for Museum Exhibitions, Washington, D.C., in cooperation with Cosprop Ltd., London, England.

“Period Costumes for the Screen: From the Collection of Cosprop, London” will be on display through Sunday, Dec. 16. The Academy’s galleries, located at 8949 Wilshire Boulevard in Beverly Hills, are open Tuesdays through Fridays, 10 a.m. to 5 p.m., and weekends, noon to 6 p.m. The Academy will be closed during the Thanksgiving holiday weekend – Thursday, Nov. 22 through Sunday, Nov. 25. For more information call (310) 247-3600 or visit www.oscars.org.

Photos: Courtesy of the Margaret Herrick Library (all three photos), also Stephen F. Morley (Ever After) and David Appleby (Emma).

Mahler and The Devils director Ken Russell, the terrible homme d’âge moyen of the film scene of the late 1960s and 1970s, was honored by the Academy of Motion Picture Arts and Sciences this past Sept. 20 at the Curzon Soho in London. “An Evening with Ken Russell” featured a screening of the director’s Women in Love (1970), which brought him his only Academy Award nomination, in addition to a Best Actress Oscar for Glenda Jackson.

Among Ken Russell’s movies are the much underrated 42nd St.-ish musical The Boy Friend (1971), with Twiggy (as a sort of Ruby Keeler), Christopher Gable (as a sort of Dick Powell), and Glenda Jackson (as a sort of Bebe Daniels); the generally well-liked rock opera Tommy (1975), with Roger Daltrey, Best Actress Oscar nominee Ann-Margret, and Oliver Reed; the generally disliked Valentino (1977), with Rudolf Nureyev as Rudolph Valentino, and the likes of Leslie Caron as Alla Nazimova and Michelle Phillips as Natacha Rambova; and the generally weird Salome’s Last Dance (1987), with Imogen Millais-Scott as an actress playing Salome and Glenda Jackson as an actress playing Herodias.

The still-active Ken Russell is currently working on another film version of Moll Flanders. (Kim Novak played the character in Terence Young’s 1965 movie The Amorous Adventures of Moll Flanders, and so did Robin Wright in Pen Densham’s 1996 version.)

In the top photo, Ken Russell is sitting next to another ’70s film icon, Nicolas Roeg, among whose directorial efforts are the psychological horror drama Don’t Look Now (1973), with Donald Sutherland and Julie Christie, and the quirky sci-fier The Man Who Fell to Earth (1976), with David Bowie.

Addendum: In The Times of London, Ken Russell discusses Joseph Lanza’s “critical biography” Phallic Frenzy: Ken Russell and His Films. The article is called “Can it really be me who lived that life?” Below are a couple of Ken Russell quotes:

“I must say, Lanza has done his homework. He knows more about my life than I do. It’s a little unsettling to read such intimate details about yourself by someone you’ve never met.

“Phallic Frenzy reads like an overblown, outrageous biographical film script by Ken Russell, full of myth masquerading as fact. And as usual the finished product is bright, irreverent, camp and cacophonous. Lanza has managed to disguise his masterful research as a near-neo-novel with gothic and surreal overtones. I have to applaud the man, having done the same with my own biographies on composers. It makes for a thrilling read – it vibrates, shimmies, pounds down the pavement of every page. And it’s full of admirable detail, insightful conclusions and what, for me, are painful remonstrances – a celebration and something of a telling-off at the same time.”

I am looking for A COUSTOM TO REFLECK OUT OF AFRICA FOR A VERY TALENTED 14 YEAR OLD WHO JUST WON SILVER NOVICE NATIONAL FIGURE SKATING COMPETITION. SHE WILL NOW SKATE JR LEVEL AND START SKATING INTERNATIONAL LEVEL. ANY HELP WILL BE APPERICATED THANK

I’d like a coat like Jack Sparrows’ greyish linen silk tweed.
price and feasiability for the moment thank you….. Norm

You are very pretty and that is clearly TRUE!
But what is also true is that you contradict yourself——- Lssso of TRUTH and yet it is OK to lie to someone about who they have had sexual encounters with—- does that include telling your spouse or loved-one!
Being unfaithful is OK?

i love linda carter and still do.