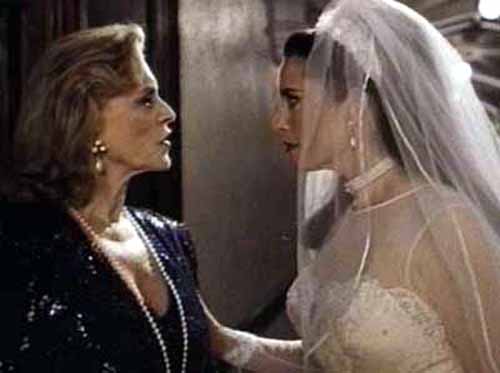 Lauren Bacall and Mimi Rogers in Barbra Streisand’s The Mirror Has Two Faces.

In her 2005 autobiography By Myself and Then Some, Lauren Bacall’s updated version of her 1978 bestseller By Myself, the two-time Tony Award-winning actress (for Applause in 1970 and Woman of the Year in 1981) candidly discusses the ballyhoo surrounding her first – and to date only – Academy Award nomination for Barbra Streisand’s 1996 romantic comedy-melodrama The Mirror Has Two Faces.

Apart from a few film career lulls, Bacall had been working steadily in front of the camera since her film début in Howard Hawks’ 1945 adventure-drama To Have and Have Not. But whether as mere on-screen decoration (Key Largo, Bright Leaf, Young Man with a Horn) or as a reliable leading lady (How to Marry a Millionaire, Woman’s World, The Fan), she had been invariably ignored by the Academy of Motion Picture Arts and Sciences.

More than half a century after she made film history as Humphrey Bogart’s love interest in To Have and Have Not, actress-director-composer-singer-etc. Streisand nabbed the by then legendary Bacall to play her domineering mother in The Mirror Has Two Faces.

Upon its release, Streisand’s film got massacred by critics, who felt – in my view, unjustly so – that The Mirror Has Two Faces was made only to reflect her ego. Even so, the movie did well at the box office, and it provided Bacall with her best film role in years. At the time, there was much talk of a Best Supporting Actress Academy Award nomination, something that became a reality early in 1997.

Also that year, Bacall won the Golden Globe and the SAG Award for Best Supporting Actress, and received a nomination from the British Academy of Film.

At the Oscar ceremony on March 24, the first award of the evening was for Best Supporting Actress. Bacall’s fellow contenders were Joan Allen for The Crucible, Juliette Binoche for The English Patient, Barbara Hershey for Portrait of a Lady, and Marianne Jean-Baptiste for Secrets & Lies. Everyone everywhere was sure that the Oscar statuette came out of the factory with Lauren Bacall’s name carved on it.

Well, everyone everywhere with the possible exception of Oscarmeister Harvey Weinstein. His studio, Miramax, had been pushing hard for Anthony Minghella’s World War II romantic melodrama The English Patient, and for every individual associated with it. In that film, Juliette Binoche plays a nurse who finds and loses love while trying to save lives during World War II.

When Kevin Spacey opened the envelope containing the name of the year’s Best Supporting Actress, the unthinkable happened: The surest bet in years lost the award to Binoche, who, in her acceptance speech, said she herself was expecting Bacall to win.

Following the ceremony, Bacall recalls in By Myself and Then Some:

“We got through the rest of the programme and headed for the great dinner – chocolate Oscars at every place. I felt very alone. No matter how you slice it, this was a ball for winners. Kevin Spacey was there. He came over and invited me on to the dance floor, thank heaven. It’s not a good thing to be a shoo-in.”

Now, I believe that the Academy committed a major injustice when they gave Juliette Binoche the Best Supporting Actress Oscar that year.

Let’s ignore the fact that Lauren Bacall had been around for more than five decades, had never been nominated for an Oscar before, and was (and still is) a link between the late 20th-century/early 21st-century film world – Barbra Streisand, Robert Altman, Nicole Kidman, Jeff Bridges, even Lars von Trier – and Old Hollywood: Howard Hawks, Vincente Minnelli, Humphrey Bogart, Charles Boyer, Gregory Peck, Marilyn Monroe, Doris Day, Betty Grable, Gary Cooper.

I’d say that the real problem with Binoche’s surprise win was a technical – not a sentimental – one.

Even though Binoche’s character isn’t leading man Ralph Fiennes’ love interest, the actress has what amounts to a leading role in The English Patient. In fact, she is at the center of one of the film’s two storylines; she doesn’t “support” anyone. Bacall, on the other hand, has a real (and good) supporting part in The Mirror Has Two Faces.

Binoche could – and should – have been nominated in the Best Actress category. But that would have pitted her against fellow English Patient player Kristin Scott Thomas, who, as Fiennes’ romantic interest in the film, was being pushed as the film’s lead actress. Scott Thomas, in fact, did eventually get a nomination in that category. (She lost to Frances McDormand in Fargo).

Thus, Miramax opted to advertise Binoche as a supporting player while the members of the Academy’s Actors Branch opted to ignore the obvious ruse.

They had done it before. For instance, Melvyn Douglas’ role in Martin Ritt’s 1963 family drama Hud is bigger than Patricia Neal’s; yet, Douglas won the Best Supporting Actor Oscar, while Neal was that year’s Best Actress. (Best Actor nominee Paul Newman was Hud‘s official male lead.)

And they would do it again, e.g., Julianne Moore has more screen time than Nicole Kidman in Stephen Daldry’s 2002 drama The Hours. Even so, Kidman won the Best Actress Oscar for that film, while Moore was pushed – and was eventually nominated – in the Best Supporting Actress category so as not to compete with either Kidman or Meryl Streep. (Or with herself, for Moore was up for consideration for her lead role in Far from Heaven.)

Binoche’s win as a “supporting” actress is one of the numerous Academy-made injustices that make the whole process too inane to be taken seriously. That is, as Bacall can testify, unless you’re in the running.

First of all, thank you for writing.

Back in the old days — up to 1963, if I’m not mistaken — they had to nominate performers according to how the studios labeled them. “Stars” could only be nominated in the lead categories; others could be nominated as either “best actor/actress” or “best supporting actor/actress.”

The Tatum O’Neal story almost repeated itself in 2003, when Keisha Castle-Hughes was pushed in the best supporting actress category for “Whale Rider” — but Academy members, for once, used their brains and nominated her as a lead actress.

Castle-Hughes *is* the film. She even has the title role. But kids almost invariably have been nominated in the supporting categories, and that’s where studios have usually tried to place them.

And finally, I must admit that I’m one of the few who actually enjoyed — to a certain extent — “The Mirror Has Two Faces.” I’ve never been a Lauren Bacall fan, but I did like her in that film.

Now, Sean Connery in “The Untouchables,” Don Ameche in “Cocoon,” Al Pacino in “Scent of a Woman” … Well, those are career awards that should have gone elsewhere.

I couldn’t agree more about the injustices of the Academy Awards in regards to actors being placed in incorrect categories, though I understand a lot of that has to do with the studios that release the films rather than the actual Academy itself. Whatever the reasons, it should be looked into and some sort of guidelines should be established (amount of time on screen, size of role compared to others in the same film, etc.). I agree with most of Andre Soares’ examples of the absurdities of this issue, though none compare to the ridiculousness of Tatum O’Neal winning a supporting actress Oscar for a movie in which she is in nearly every scene from beginning to end. She is not only the female lead, she is the star of this movie. These silly decisions also hurt other actors such as the late, great Madeline Kahn, who gave a truly wonderful supporting performance in the same film. She was nominated and to this day I still remember the look on her face when O’Neal’s name was announced. By the way, I have nothing against O’Neal’s fun child performance. It just is not in any way shape or form even close to a supporting role. Having said all of this, while I did not much appreciate the win by Binoche in The English Patient, Lauren Bacall simply did not deserve an Oscar for the mediocre “Mirror Has Two Faces”. She’s okay in it, but her winning would have brought up another Oscar problem and that is giving awards to undeserving performances because the performer has been overlooked in the past or is very famous or has had a successful career or whatever. In a perfect world, every Oscar winner should have won because the majority of voters thought they had given the best performance in their particular category. No other criteria should be used, but alas, that is not the case. There are too many examples to list them all, but Al Pacino in “Scent of a Woman” comes to mind first and Katharine Hepburn for “Guess Who’s Coming to Dinner” is quickly thought of as well. Don’t get me wrong. Neither of these are bad performances, but they were neither the best in their year nor in their careers (at the time, Hepburn had only one once back in 1933 and this was clearly a consolation/career achievement type of award). So, back in 1997, would I have rather seen someone in starring role win a supporting award or someone who was in a true supporting role win for giving a stock performance? There is no answer to the question as neither of these two should have even been nominated in the supporting actress category in that particular year.