‘Leave Her to Heaven’: Film Noir in Color Stars Gene Tierney at Her Best 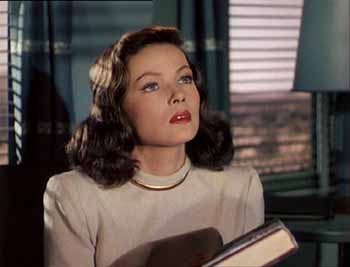 As part of the Academy of Motion Picture Arts and Sciences’ Gold Standard Series, the Academy Foundation will present the premiere of the newly restored “film noir” Leave Her to Heaven on Friday, April 20, at 8 p.m. at the Samuel Goldwyn Theatre in Beverly Hills.

Leave Her to Heaven, released in the year World War II ended, is an unusual film noir (hence the quotes in the above paragraph) for several reasons:

Making the film noir label even more misleading, Leave Her to Heaven is much more melodrama than crime story.

Well, then, how could it be considered a “film noir” when it isn’t, really?

Whether intentionally or not, the Leave Her to Heaven filmmakers have subverted the film noir conventions – both thematically and esthetically – while remaining faithful to the dark spirit of the genre.

Directed by John M. Stahl – whose flair for melodramas dates back to the silent era – from a screenplay by Jo Swerling (based on Ben Ames Williams’ novel), Leave Her to Heaven stars Gene Tierney as a woman who loved too much but not too sanely. Consequently, our heroine lies, kills, falls down the stairs, has nervous breakdowns, and wears lots of seductive gowns. And all because of Cornel Wilde.

Tierney, one of the most ravishingly beautiful – and most underrated – actresses in film history, shines as the psychopathic heroine. Wilde and good sister Jeanne Crain are less effective, but that doesn’t really matter as Leave Her to Heaven is a Gene Tierney showcase. And what a showcase.

Whether one calls it film noir, women’s film, shameless potboiler, gaudy kitsch, or what-have-you, Leave Her to Heaven is one of the best Hollywood films of the 1940s – one that showed (inner) pitch-black shadows looming in even the brightest corners of the “safe for peace” post-World War II period.

Leave Her to Heaven

Tickets are $5 for the general public and $3 for Academy members. Tickets for this event will be available beginning April 2, at the Academy during regular business hours, by mail (HTML or PDF format), or on the night of the screening, if still available. The Academy Foundation does not take phone reservations or any credit cards. If ordering by mail, include a self-addressed, stamped envelope along with your personal check made out to ACADEMY FOUNDATION. On the day of the event, doors open at 7 p.m. All seating is unreserved. For additional information, call the Academy at (310) 247-3600.