Andre Soares 14 years ago
Leave Her to Heaven: Gene Tierney and Cornel Wilde.

The Academy of Motion Picture Arts and Sciences will present the Technicolor film noir (yes, there was such a thing) Leave Her to Heaven, starring Best Actress Oscar nominee Gene Tierney, as part of its “Monday Nights with Oscar” series on March 17 at 7:30 p.m. at the Academy Theater in New York City.

In Leave Her to Heaven, Gene Tierney, who had the title role in Otto Preminger’s classic 1944 (black-and-white) film noir Laura, stars as Ellen, a beautiful woman who falls madly – and I mean madly – in love with a novelist (Wilde).

Leave Her to Heaven was recently restored by 20th Century Fox and the Academy Film Archive, with funding from the Film Foundation.

“Monday Nights with Oscar” is a monthly series showcasing high-quality prints of films that have been nominated for or won Academy Awards.

Tickets for Leave Her to Heaven are $5 for the general public and $3 for Academy members and students with a valid ID. Tickets may be reserved by calling 1-888-778-7575. Depending on availability, tickets may be purchased in person on the night of the screening. Doors open at 7 p.m. All seating is unreserved. 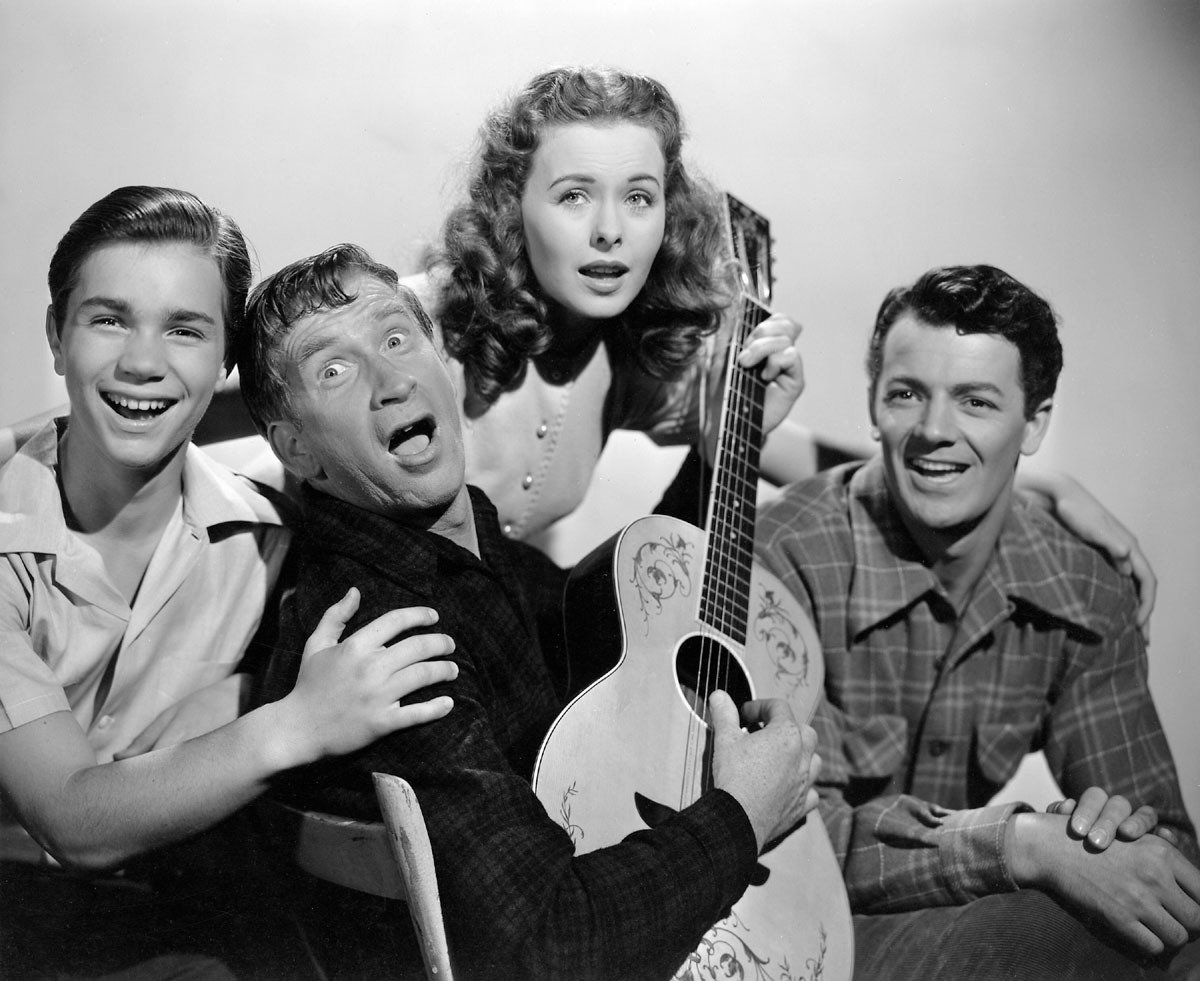 The 28th edition of Cinefest will be held from March 13–16 in Syracuse, New York. As per the Cinefest website, the mini-festival features “great films to fill the four glorious days from the vaults of the world’s greatest libraries and obscure specialties we are noted for from private collectors!” 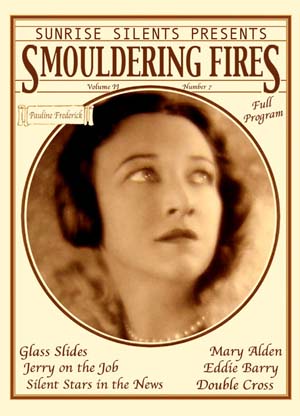 The (tentatively) scheduled films all seem fascinating, even if in large part because they’re so rare.

Among them are two with the striking Pauline Frederick: Smouldering Fires (1925), a Clarence Brown-directed drama (co-starring Universal’s top female star, Laura La Plante) that received great acclaim upon its release, and Wayward (1932), an early talkie in which Frederick supports Paramount star Nancy Carroll; and one Norma Talmadge vehicle, The Lady (1925), in which Talmadge suffers – and how she suffers – as a woman wrongly separated from her beloved son. (At RKO, The Lady was remade as The Secret of Madame Blanche [1932], with Irene Dunne.)

[The cover on the left is from Sunrise Silents’ Smouldering Fires disc, which also includes short subjects, a newsreel, one episode from the 1917 serial Mystery of the Double Cross, and a 1922 Mary Alden vehicle called Disposing of Mother.]

Also, Lillian Gish’s first talkie, One Romantic Night (1930), in which she is courted by Rod La Rocque and Conrad Nagel, and supported by inveterate scene-stealer Marie Dressler (this romantic comedy taken from Ferenc Molnár’s play would be remade in 1956 as The Swan, with Grace Kelly, Alec Guinness, and Louis Jourdan); Dorothy Lamour’s official screen debut, The Jungle Princess (1936), in which she (as a woman named Ulah with a tiger as a pet) dons the obligatory sarong (or some sort of facsimile); and the Alice Faye musical You’re a Sweetheart (1937).

Plus a couple of British silents: Shooting Stars (1927), a tale of love and deception co-directed by Anthony Asquith (with, as per the IMDb, A.V. Bramble, whom I’d never heard of), and starring Brian Aherne (who’d move to Hollywood in the 1930s), and Adrian Brunel’s The Vortex (1928), based on a Noel Coward play, and starring Britain’s biggest male star of the era, Ivor Novello.

Of the listed films, I’ve seen only one: Mervyn LeRoy’s Show Girl in Hollywood (1930), an early talkie in which Alice White – who rapidly faded from the scene – plays a rising star who learns that Hollywood is a Tough Town. She is supported by Blanche Sweet, who should know. By 1930, Sweet’s two-decade film career was all but over. That’s quite possibly why she’s so effective as a has-been in the film, memorably singing the ditty “There’s a Tear for Every Smile in Hollywood.” (See below.)

Thus far, the listed Cinefest titles (all subject to change) are:

(Note: Due to collector Rusty Castleton’s death, a handful of the titles listed below – not sure which – have become unavailable.)

A Sunday morning auction is expected to attract Leonard Maltin, the Library of Congress’ Mike Mashon and James Cozart, the George Eastman House’s Pat Loughney, Caroline Yeager, and Ed Stratmann, and others.

As per the Cinefest website, “registration or admission fee is required of each person attending Cinefest. Cinefest 28 screenings begin at 9:00 am on Thursday, March 13th and will run through 5:00 pm Sunday, March 16th. Pre-registration cost for each person before February 5th is $65.00, after February 5th, $70.00 for all four days. Remember, pre-registration discount cutoff date is Monday, February 5th. On a daily basis, the registration cost is $25.00 per day. Your ticket, as purchased, will admit you to all activities at the Holiday Inn during the four-day run of the Cinefest – all film screenings, dealer rooms, etc.

“This year’s 35mm screenings will be Saturday morning, March 15th at the newly restored Palace Theater. The fee is $25.00 and includes bus transportation from the hotel to the Palace Theater and back to the hotel at the conclusion of the 35mm program.”

Directed by An Jong-hwa, Cheongchun’s Sipjaro was first screened at Seoul’s Joseon Theater in September 1934.

As per Garcia’s article, there are two other Korean films known to be older than Cheongchun’s Sipjaro (Crossroads of Youth): Uilijeogguto (Fight for Justice), screened on October 27, 1919; and the first dramatic Korean film, Weolha-ui Mangseo (The Vow Made Below the Moon), directed by Yun Baek-nam and screened in 1923.

Garcia states that KOFA doesn’t have prints of those two films, but I couldn’t quite figure out – since Cheongchun’s Sipjaro is hailed as the oldest surviving Korean film – if no one else has any prints, either. The reason for my confusion is that, as per Garcia’s piece, Korea produced about 70 films before 1930. In other words, there were many more than just two Korean films older than Cheongchun’s Sipjaro.

In case I’m making things more confusing than they should, you might want to check out Garcia’s report in the Korea Times.

Addendum: Variety reports that (a nitrate negative of) Crossroads of Youth was discovered by the son of a former theater owner. As per the article, “eight of the film’s nine reels were in viewable condition and have undergone restoration in Japan.” KOFA will hold the first public screening of the 73-minute drama in May.

As per the Academy’s press release, “Hollywood’s Censor tells the little-known story of Joseph I. Breen, one of the most powerful men in motion picture industry history. Breen reigned over the Production Code Administration, the Hollywood office tasked with censoring the American screen, from 1934 to 1954. He dictated ‘final cut’ over thousands of movies – more than any other individual in American cinema, before or since. His editorial decisions had a profound effect on the images and values projected by Hollywood during the Great Depression [sic], World War II and the Cold War.”

(Actually, American movies made during the height of the Great Depression were somewhat free of Breen’s mercilessly puritanical scissors. Check out Paramount Before the Code, Fox Before the Code, and Forbidden Hollywood.)

“Striving to protect ‘innocent souls’ from the temptations of the motion picture screen, there were few elements of cinematic production beyond Breen’s reach. Breen vetted story lines, blue-penciled dialogue and excised footage (a process that came to be known as ‘Breening’) to fit within his strict moral framework. He oversaw the editing of A-list feature films, low-budget B-movies, short subjects, previews of coming attractions, and even cartoons.”

If this sounds frightening, it’s because it is. Especially if you consider that there are many – and I’m not talking about sex-crazed religious freaks – who find that the work of Joseph Breen and like-minded censors is good for art. Their absurd rationale is that censorship makes artists more creative. In other words, the more ruthless the censor, the greater the artist. Ah…Genius!

Baby Face (top photo), recently restored to its original, glorious amorality, stars Barbara Stanwyck as a working-class gal who knows both what she wants and how to get it. This delightfully raunchy 1933 comedy would never have been made – or would have been bowdlerized beyond recognition – had it been in the works a mere year after its original release. In fact, even in 1933 it caused such a furor among state censors that the film, once finished, had to be recut and redubbed.

(Otto Preminger’s highly successful comedy The Moon Is Blue, which opened the year before Breen’s retirement, was the first major Hollywood production to be released without the Production Code’s seal of approval – due to family-zapping words such as “virgin” and “seduce.”)

The Academy’s Institutional Grants Committee selected Doherty as an Academy Film Scholar in 2003. He has previously authored Cold War, Cool Medium: Television, McCarthyism, and American Culture; Pre-Code Hollywood: Sex, Immorality, and Insurrection in American Cinema, 1930–1934; Projections of War: Hollywood, American Culture, and World War II; and Teenagers and Teenpics: The Juvenilization of American Movies in the 1950s. He is a professor of American studies at Brandeis University, and serves on the editorial boards of Cinema Journal and Cineaste.

Established in 1999, the Academy Film Scholars program “is designed to stimulate and support the creation of new and significant works of film scholarship about aesthetic, cultural, educational, historical, theoretical or scientific aspects of theatrical motion pictures. Film scholars receive $25,000 to research and produce such works, which can take the form of books, multimedia presentations, curatorial projects, DVDs or Internet sites.”

For grant guidelines and information about the Academy Film Scholars program, visit www.oscars.org/grants/filmscholars.

Admission to the Academy Film Scholars presentation is free, but tickets are required. Tickets are available by mail, at the Academy box office, or online at www.oscars.org. Doors open at 6:30 p.m. All seating is unreserved. The Linwood Dunn Theater is located at 1313 Vine Street in Hollywood. Free parking is available through the entrance on Homewood Avenue. For more information, call (310) 247-3600.

Darryl Hickman should be ashamed of himself for verbally attacking Gene personally and professionally. He needs to read her book in order to understand all the pain that she endured in the ’40s and ’50s.

“Hell has many doors, but Heaven has only one.”