There was plenty of “diversity” at the 2016 Golden Globes ceremony, held on Jan. 10 at the Beverly Hilton Hotel in Beverly Hills. Winners were male, female, white, black, openly gay, openly straight, newcomers, old-timers, American, Mexican, British, Hungarian, Italian – even film people and TV people. And let’s not forget Leo and Kate. (More on the titanic reunion further below.)

True, nearly all Golden Globe winners were either established Hollywood stars or fast-rising Hollywood stars-to-be. But hey, you just can’t have it all. (See full list of winners and nominees further below.)

Yet one must admit that Gael García Bernal’s Best Actor in a TV Series – Comedy win for Mozart in the Jungle came out as quite a surprise. Bernal is an “international name,” but he could not in any way be considered a “Hollywood name.”

And that goes to prove that even the much-maligned Hollywood Foreign Press Association can be a little daring in their choices. Every once in a while.

This year, the Golden Globes ceremony also offered a little wit – e.g., host Ricky Gervais calling out multimillionaire Jennifer Lawrence on her complaints about women earning less than men in Hollywood – and lots of cringe-worthy garbage as well.

The nadir was probably an exchange between Gervais, whose mean-spirited shtick should go the way of the dodo bird, and Mad Max actor Mel Gibson. The repartee in question revolved around Gibson’s widely publicized drunken outburst several years ago and colonoscopy appointments.

Or perhaps the nadir was a joke whose punchline focused on a Feb. 2015 car accident involving Caitlyn Jenner (formerly Bruce Jenner) which left a 69-year-old woman dead.

Many in the crowd found the joke hilarious. Others elsewhere were offended because they found the joke transphobic. As for the car accident victim, she was not a celebrity. So why would anyone be offended or find the joke grossly insensitive?

And that’s glitzy, glamorous Hollywood for the hip and crass crowd everywhere. 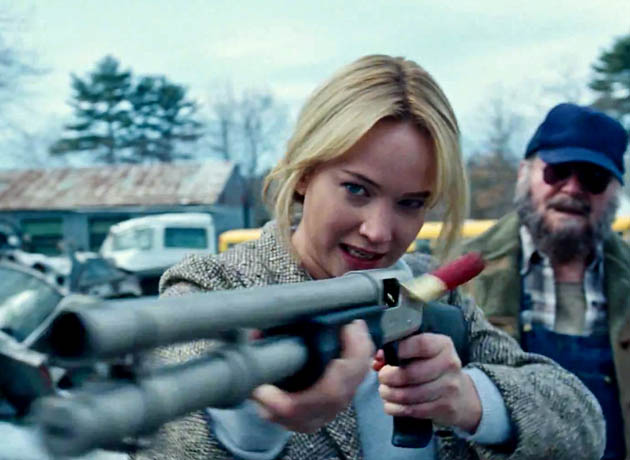 There were several other memorable (for lack of a better word) moments at the 2016 Golden Globes ceremony.

For instance, Taraji P. Henson, Best Actress in a TV Series – Drama for Empire, curtly snapped at the teleprompter (one assumes that was the teleprompter): “Please wrap?! I waited 20 years for this! You’re gonna wait.” Some in the crowd found that hilarious. Fifty seconds later she was still giving thanks to a whole array of people when the orchestra let her know that, 20-year wait or no, her time on stage was up.

Jennifer Lawrence, who won Best Actress in a Motion Picture Comedy or Musical for Joy (not exactly a comedy and in no way could it be considered a musical), had her Memorable Golden Globe Moment backstage, when she decided it was her civic duty to lecture a journalist on when not to use his cell phone.

“You can’t live your whole life behind your phone, bro,” she told him. “You just can’t do that. You gotta live in the now.”

Was the journalist at the wheel? Or at the dinner table?

And is that how Lawrence talks to studio executives?

Can’t answer the third question (though it would be highly doubtful), but regarding the first two, No, he was at the Golden Globes – working; his smart phone one of the tools of his trade.

Next, she poked fun at his tentative question, “How could you see yourself for the Oscar night?”

Her reply: “We’re at the Golden Globes. If you put your phone down, you’d know that,” oblivious to the obvious fact that he was a non-American whose first language was not English. And who – cell phone or no, clunky English-language sentence structure or no – was in all probability asking her about her chances of landing an Oscar nomination (to be announced four days later) – as was his right, even while at the Golden Globes ceremony.

Worst of all, however, was the hearty laughter of his fellow “journalists” – the reporter asking the question laughed nervously when the others laughed – and the tweets from online and trade rags that found Lawrence’s attitude not only appropriate but just plain adorable.

Ultimately, the journalist managed to squeeze in a question about her working with Edgar Ramírez in Joy. Lawrence condescended to answer that particular query without any snide remarks.

Now, how important is this news bit? Well, important enough for The Guardian to publish a full article – two people debating the issue – about whether or not Jennifer Lawrence acted like an obnoxious, arrogant jerk at the Golden Globes and when people should use/not use their smart phones.

It’s the end of the world as we know it. Or perhaps it has already ended and we’ve just not been made aware of it because our “news” sources are too busy debating the righteousness (or lack thereof) of the multimillionaire Hunger Games and X-Men franchise actress.

And that takes us back to News That Truly Matter: The actual highlight of the 2016 Golden Globes ceremony, which had nothing whatsoever to do with poison-tongued hosts or some entertainer or other acting like a prima donna – or even who won or lost in whichever category.

Instead, the Globes’ greatest moment featured a protruding elbow and a (surprised? bemused? mystified? knowing?) look. Check out the gif image at the top of this post.

It’s just too bad Leonardo DiCaprio didn’t make that exact same face while accepting his Best Actor in a Motion Picture Drama Golden Globe for The Revenant. That would have shut up both the teleprompter and the orchestra. 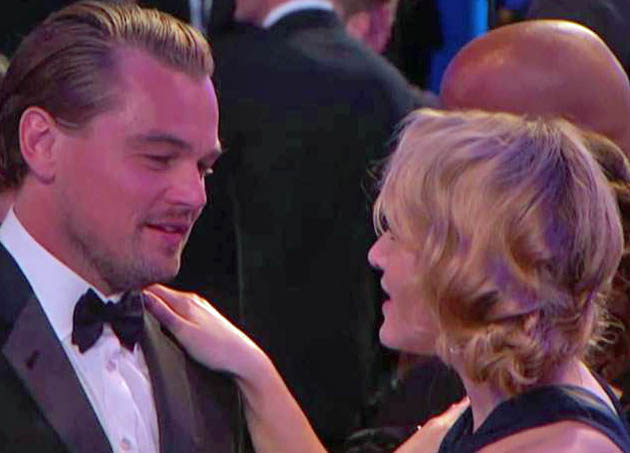 Leonardo DiCaprio’s protruding elbow or no, as far as most 2016 Golden Globes watchers were concerned the likely highlight of the Jan. 10 ceremony was the reunion of Leo and Kate – a.k.a. Jack and Rose.

At this year’s Globes, Leonardo DiCaprio and Kate Winslet were seen together nearly two decades after the release of James Cameron’s unsinkable worldwide blockbuster Titanic, which a mere four years ago was once again sailing away all over the planet, even breaking box office records in, where else, China.

The trophies they won, however, were for different movies.

In his opening speech at the Golden Globes, host Ricky Gervais reminded the crowd of the obvious: “If you do win tonight, remember: no one cares about that award as much as you do. Don’t get emotional; it’s embarrassing.” Shortly afterwards, Kate Winslet embarrassed herself.

Winslet looked shocked – utterly, speechlessly, wide-eyedly shocked – at the fact that she was chosen by the Hollywood Foreign Press Association voters as the year’s Best Supporting Actress for her performance as Apple’s Joanna Hoffman (Slavic accent and all) in Danny Boyle’s generally well-received (by U.S. critics) box office flop Steve Jobs, starring Michael Fassbender in the title role. (More on Fassbender further below.)

Yet Winslet, though hardly a box office draw these past few years, is a movie star who has been around for more than two decades. And the Hollywood Foreign Press Association loves movie stars.

Else, there’s an excellent chance she wouldn’t have been even nominated for the award.

Kate Winslet, in fact, is a Golden Globe favorite, having previously taken home three statuettes – two of them at the same ceremony:

Besides, she has been shortlisted for seven other Golden Globes, including nods for several box office flops (Labor Day, Carnage, Little Children) that would have made most other – lesser-known – actresses unnominationable:

By the way, this year Kate Winslet received her Best Supporting Actress Golden Globe from a disheveled Channing Tatum and Jonah Hill – the latter wearing a bear “hat” in honor of eventual Best Picture Drama winner The Revenant.

Whether Hill’s shtick was hilariously irreverent or painfully infantile depends on your sense of humor. (See clip further below.)

As mentioned above, the other half of the Leo and Kate duo, Leonardo DiCaprio, took home the Best Actor – Drama Golden Globe for his performance in The Revenant, directed by Alejandro González Iñárritu.

Unlike Steve Jobs, the (somewhat surprising) box office hit stars DiCaprio as a man fighting for survival in the inhospitable badlands (or whereabouts) of the northern American plains in the early 19th century.

Like “Kate,” “Leo” has taken home multiple Golden Globes – three to be exact. Prior to The Revenant, his other wins were:

Once upon an Ennio in America

And finally, Quentin Tarantino told the crowd at the Golden Globes that Ennio Morricone – Best Original Score winner for The Hateful Eight – had never won a competitive award for an individual film “in America.”

Never mind the fact that at the Golden Globes alone, Morricone had previously won awards for The Mission (1986) and The Legend of 1900 (1999).

In addition to a Grammy for The Untouchables (1987) and a Los Angeles Film Critics Association Award for Once Upon a Time in America (1984).

2016 Golden Globes winners: Does Michael Fassbender have a chance?

At the time, Gervais roasted the rich and famous (and not so famous) ceremony attendees (and several non-attendees), implying, at times without naming names, that Hollywood Scientologists (Tom Cruise and John Travolta) were gay, that Jodie Foster was a lesbian (a juvenile, cringe-worthy joke about Foster’s box office flop The Beaver, starring Mel Gibson), that Madonna was hardly like her song “Like a Virgin” (for which Gervais had his masculinity questioned), and so on.

Expect more of same this year for the entertainment of those who can only wish they were rich and famous and getting drunk at the Beverly Hilton hotel in Beverly Hills this evening, Jan. 10, ’16.

The Golden Globes ceremony begins in less than half an hour (5 p.m. PT).

Below are my last-minute predictions in the various film categories. And further below is the full list of the 2016 Golden Globes’ actual winners and nominees in both film and television.

And no, Leo and Kate are not to be found on the list immediately below.

“Does Michael Fassbender have a chance (at this year’s Golden Globes)?” The obvious answer should have been: No way.

And what’s more: Leo and Kate should have been included in the list.