The 2012 Les Misérables reviews are beginning to pour in. The trailers look great, but some reviewers found the film itself quite a bit less so.

“A gallery of stellar performers wages a Sisyphean battle against musical diarrhea and a laboriously repetitive visual approach in the big screen version of the stage sensation Les Misérables. … Director Tom Hooper has turned the theatrical extravaganza into something that is far less about the rigors of existence in early 19th century France than it is about actors emoting mightily and singing their guts out. As the enduring success of this property has shown, there are large, emotionally susceptible segments of the population ready to swallow this sort of thing, but that doesn’t mean it’s good.”

Curiously, whereas McCarthy bitterly complains about the director’s camera set ups, Variety‘s Justin Chang felt much the opposite:

“In visual terms, Hooper adopts a maximalist approach, attacking the material with a vigor and dynamism that suggest his Oscar-winning direction on The King’s Speech was just a warm-up. At every turn, one senses the filmmaker trying to honor the material and also transcend it, to deliver the most vibrant, atmospheric, physically imposing and emotionally shattering reading of the show imaginable.”

“… For all its expected highs, the adaptation has been managed with more gusto than grace; at the end of the day, this impassioned epic too often topples beneath the weight of its own grandiosity.”

Anne Hathaway: ‘Frightened to refuse [her] an award’

Regarding Anne Hathaway’s performance as Fantine – remember, the singing in Les Misérables was recorded live – The Guardian‘s Catherine Shoard writes:

“She turns [‘I Dreamed a Dream’] into a symphony of phlegmy upset, climaxing in a panic attack of bloke woe (‘He took my childhood in his stride / But he was gone when autumn came’). It’s a performance of monumental welly, one you’d be too plain frightened to refuse an award.”

So, will Anne Hathaway’s all-but-inevitable Best Supporting Actress Oscar, SAG Award, and Golden Globe be the result not of admiration, but of sheer terror?

Shoard sums up her Les Misérables review with the following:

“But the experience of actually sitting through Les Mis, all 160 minutes of it, can feel less like an awards bash than an epic wake, at which the band is always playing and the women are forever wailing. By the end, you feel like a piñata on the dance floor: empty, in bits, the victim of prolonged assault by killer pipes.”

That’s something to look forward to on Christmas Day in a handful of countries, including the United States and Canada. Audiences in most other major markets will have to wait for Les Misérables’ killer-pipe assault until early 2013.

Not an awards season favorite so far

The National Board of Review, for their part, listed Tom Hooper’s musical as one of the year’s Top Ten Films and selected the Les Misérables ensemble as the best of the year. 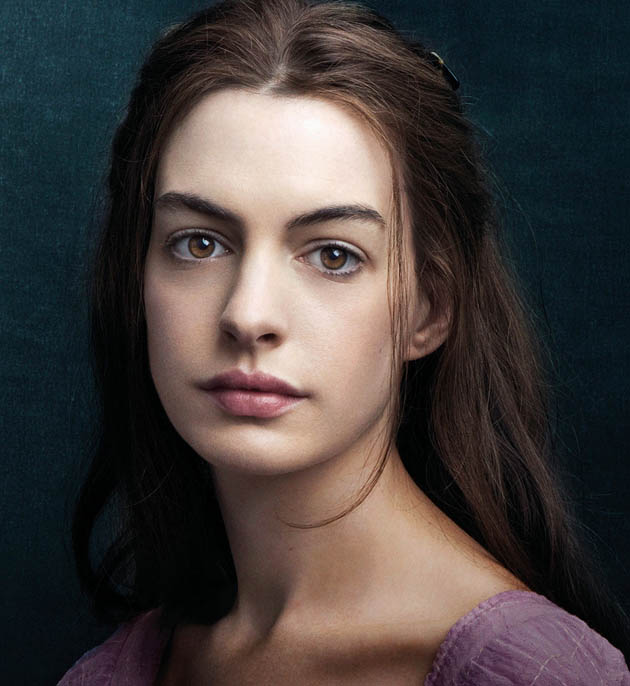 Les Misérables with Anne Hathaway. If ever there was a shoo-in Oscar contender, that would be Anne Hathaway for her performance as the ill-fated Fantine, who goes from factory worker to street prostitute to dead in Tom Hooper’s musical based on Victor Hugo’s socially conscious 1862 novel. Until her Catwoman in Christopher Nolan’s The Dark Knight Rises, Hathaway was best known for David Frankel’s The Devil Wears Prada (2006), cast as Meryl Streep’s fashion-unconscious assistant, and for two teen-girl-oriented Garry Marshall flicks of the early 21st century: The Princess Diaries (2001) and The Princess Diaries 2: Royal Engagement (2004).

Based on Claude-Michel Schönberg, Alain Boublil, and Jean-Marc Natel’s stage musical adaptation of Victor Hugo’s 1862 novel, Les Misérables was officially written for the screen by Schönberg, Boublil, Herbert Kretzmer (who penned the English-language version of the French-language musical), and William Nicholson.

Among the previous film versions (and one variation) of Les Misérables, a favorite topic in both France and Hollywood, are the following:

The 10th Anniversary concert set the bar very high. I don’t think this is going to come near that given the singing talent of the actors. If it doesn’t have Colm Wilkinson, Philip Quast, Ruth Henshall, Lea Salonga, Michael Ball it’s not going to be worth my time.

They should have done away with the musical and tried to dramatize the movie.

It’s nice to know that critics only have their opinions to share & not everyone agrees with their negative or “mixed” reviews. Maybe it’s good, for a change, to have a different approach, like a “live musical recording,” to Victor Hugo’s story. Don’t get me wrong, I love the quality of the singers voices in the original musicals but I want to hear & see something different. The musical was based off of Victor Hugo’s book, which is a fact, not an opinion. And there was nothing grandeur about French society during the 1800-1850’s. So the actors in this movie may not posses the “perfect” talent for singing but can portray just how awful it was to live & work in France during this time. Maybe Hooper wanted you to feel as the character’s did from Hugo’s book…you know, like they were “victims of killer pipe assaults.” Also, do you think you could write your own opinion (after actually reading Victor Hugo’s book, watching any of the numerous musicals for Les Miserables & watching the 2012 Film) instead of telling us what Catherine Shoard, Todd McCarthy, & Justin Chang thought?