Alma Har’el’s Bombay Beach, set in one of the poorest communities in Southern California, was the Best Documentary winner.

All that talent will be divided among the Tribeca Film Festival’s six competitive categories. The winners will be announced on April 28 at a ceremony hosted by Gideon Yago, which will be streamed live on TribecaFilm.com.

The six Tribeca juries will award a total of $175,000 in cash and prizes. Winners will also receive a piece of original art by “an acclaimed artist” as part of the Tribeca Film Festival Artists Awards program.

The jurors for the 2011 World Narrative Competition are:

The jurors for the 2011 World Documentary Competition are:

The jurors for the 2011 Emerging Narrative Competition are:

The jurors for the 2011 Emerging Documentary Competition are:

The jurors for the 2011 Narrative Short Film Competition are:

The jurors for the 2011 Documentary and Student Short Film Competitions are:

No less than 523 entries from students representing 136 U.S. colleges and universities, in addition to 52 entries from 32 countries (mostly from Europe and the Americas), are in competition for the 2011 Student Academy Awards. An awards presentation ceremony, which will include screenings of the winning films, will be held on Saturday, June 11, at the Academy of Motion Picture Arts and Sciences’ Samuel Goldwyn Theater in Beverly Hills.

Better late than never: For the first time since the Student Academy Awards were established in 1972, up to three films may be honored with medals and cash grants in the Foreign Student Film category, just like in the individual U.S. categories. In years past, only the top winner was announced; said winner received a smaller cash grant than the equivalent American winners.

As per the Academy’s press release, the Student Academy Awards were created “to support and encourage excellence in filmmaking at the collegiate level. Gold, Silver and Bronze Medal awards and corresponding cash grants may be presented in each of four categories: Animation, Narrative, Documentary and Alternative.”

Last February, 2010 Student Academy Award winner Luke Matheny won the Oscar for Live Action Short Film for God of Love. Tanel Toom, the 2010 Honorary Foreign Film winner, was also nominated in the Live Action Short Film category for The Confession, and John Lasseter, a Student Academy Award winner in 1979 and 1980, was nominated for the Adapted screenplay for Toy Story 3.

Since the program’s inception, Student Academy Award winners have gone on to earn 43 Oscar nominations and have won 8 Academy Awards.

A complete list of schools and countries represented in the competition is available at http://www.oscars.org/awards/saa/entrants.html.

The 38th Annual Student Academy Awards ceremony on June 11 is free and open to the public, but advance tickets are required. Tickets will be available beginning on May 2. Tickets may be obtained online at www.oscars.org, in person at the Academy box office or by mail. The Samuel Goldwyn Theater is located at 8949 Wilshire Boulevard in Beverly Hills. For more information, call (310) 247-3600.

Best director: Tsui Hark, Detective Dee and the Mystery of the Phantom Flame

Best actress: Carina Lau, Detective Dee and the Mystery of the Phantom Flame

Best costume and make-up design: Bruce Yu, Detective Dee and the Mystery of the Phantom Flame

Oscar Date: Next Year’s Ceremony to Remain in Late February

The 2012 Academy Awards will be presented on Sunday, Feb. 26, 2012, Academy of Motion Picture Arts and Sciences president Tom Sherak has announced. That means the awards season calendar will remain about the same next year.

Last year, there were rumors that the Academy’s Board of Governors was considering moving up the date of the Oscar ceremony to early February or even late January. Whether or not they’re still debating the idea, that move won’t happen in 2012.

The Oscar 2012 ceremony, a.k.a. the 84th Academy Awards night, will once again take place at the Kodak Theatre at Hollywood & Highland Center in Hollywood. In the United States, the Oscarcast will be televised live by ABC. A 90-minute red carpet show will precede the ceremony broadcast. 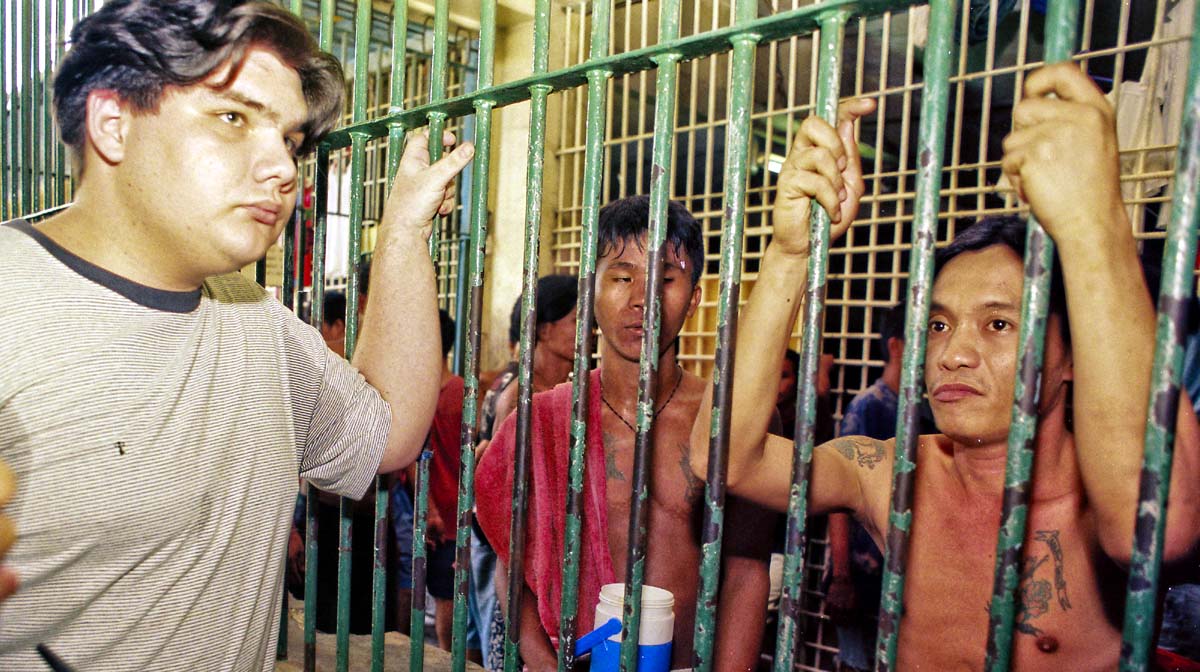 Newcomer Michael Collins’ documentary Give Up Tomorrow, about a gross – and apparently willful – miscarriage of justice in The Philippines, was named the winner of the 2011 Tribeca Film Festival’s Audience Award earlier this evening at the festival’s wrap-up party at Eye Beam in New York City. Collins will receive a cash prize of $25,000. Additionally, Give Up Tomorrow received a Special Jury Mention in Tribeca’s World Documentary Competition. (Image: Michael Collins’ Give Up Tomorrow.)

As found on the Tribeca Film Festival website, Give Up Tomorrow depicts the plight of culinary student Paco Larrañaga. In 1997, at age 19, Larrañaga was arrested for the kidnapping, rape, and murder of two sisters on the Philippines’ island of Cebu. “Despite demonstrable evidence of his innocence,” the film’s synopsis explains, “including 40 eyewitnesses and photographs placing him hundreds of miles from the scene, Paco’s legal ordeal was only just beginning.”

Upcoming screenings of ‘Give Up Tomorrow’ and other Tribeca winners

Give Up Tomorrow will be screened on Sunday, May 1 (Labor Day in most of the world, but not in the United States), at 12 noon and 9 p.m. at Clearview Cinemas Chelsea. Also screening that day will be other 2011 Tribeca Film Festival award winners. Among those are Lisa Aschan’s She Monkeys; Alma Har’el’s Bombay Beach; David Leon and Marcus McSweeney’s short film Man and Boy; Journals of Musan, winner of the Best New Narrative Director Award for Park Jungbum; Turn Me On, Goddammit, winner of the Best Screenplay Award for Jannicke Systad Jabobsen; Paula van der Oest’s Black Butterflies, which earned Carice van Houten the Best Actress Award; and Kivu Ruhorahoza’s Grey Matter, starring Best Actor winner Ramadhan ‘Shami’ Bizimana.

The National Movie Awards are a sort of British version of the People’s Choice Awards. This year’s winners included popular favorites Harry Potter and the Deathly Hallows: Part 1 as Best Fantasy Film, The King’s Speech as Best Drama (beating out Black Swan, The Social Network, and 127 Hours), and Colin Firth for Performance of the Year. See below the list of National Movie Award winners and nominees.

As you can see, the National Movie Awards actually has quite a bit in common with the Academy Awards. Only the categories are slightly different, e.g., Best Comedy (Paul), One to Watch: Brits Going Global (Jamie Campbell Bower).

Johnny Depp, for his part, received the Screen Icon Award.

Best Fantasy
* Harry Potter and the Deathly Hallows: Part 1
Gulliver’s Travels
The Chronicles of Narnia: The Voyage of the Dawn Treader
Tron: Legacy

Must See Movie of the Summer
* Harry Potter and the Deathly Hallows: Part 2
Pirates of the Caribbean: On Stranger Tides
The Hangover Part II
X-Men: First Class

Knifer tells the story of a man who goes live with his uncle in the outskirts of Athens. Once there, one of his duties is the protection of two purebred dogs.

The Best Actress was Ariane Labed for her performance as a young woman attempting to cope with sex, death, and human relationships in Athina Rachel Tsangari’s Attenberg. Labed was also chosen as Best Actress at last year’s Venice Film Festival.

The Best Actor winner was Argyris Xafis for Sotiris Goritsas’ satire of Greece’s public healthcare system Welcome All Saints. Dimitris Imellos was the Best Supporting Actor for his work in that film.

The 2011 Hellenic Film Awards ceremony was dedicated to actor Thanasis Vengos, who died yesterday. Vengos, who was last year’s honorary award recipient, was 84.

Via ioncinema.com and Screen International

The Time Machine by Mark Kendall.

Finalists in the Academy of Motion Picture Arts and Sciences’ 2011 Student Academy Awards competition have been announced. They are divided into four categories: Alternative, Animation, Documentary and Narrative. The finalists are the following (listed alphabetically by film title):

(Some) Academy of Motion Picture Arts and Sciences members will now watch the films at special screenings and vote for the winners. The potential prizes consist of Gold, Silver, and Bronze medals, in addition to cash grants of $5,000, $3,000, and $2,000, respectively.

Additionally, the winning filmmakers will be brought to Los Angeles to take part in industry-related activities and attend the Student Academy Awards ceremony on Saturday, June 11, 2011, at the Academy’s Samuel Goldwyn Theater in Beverly Hills.

Also of note, for the first time up to three films may be honored in the Foreign Student Film category. The finalists are students from the Czech Republic, Germany, Norway, Sweden, and the United Kingdom.

Past Student Academy Award winners have gone on to receive 43 Oscar nominations, and have won or shared eight awards.

The 2011 Student Academy Awards ceremony on June 11 is free and open to the public, but advance tickets are required. Tickets may be obtained online at www.oscars.org, in person at the Academy box office, or by mail. The Samuel Goldwyn Theater is located at 8949 Wilshire Boulevard in Beverly Hills.