The 2013 Cannes Film Festival came to a close on Sunday evening. Earlier in the day in Paris, an estimated 150,000 bigots took to the streets to protest the legalization of gay marriage a few days ago in France. Somewhat ironically, in the evening in Cannes, to lengthy and enthusiastic applause, the Palme d’Or went to writer-director Abdellatif Kechiche’s three-hour-long lesbian love story Blue Is the Warmest Color / La Vie d’Adèle.

Kechiche’s film offers a portrayal of the relationship between a 15-year-old high-school student Adèle (Adèle Exarchopoulos) and an Older Woman, Emma (twenty-something Léa Seydoux). Prior to the closing ceremony, it had already taken home the International Film Critics’ FIPRESCI Prize for a film in the Cannes Film Festival’s Official Competition. (See list of winners further below.)

Blue Is the Warmest Color and explicit lesbian sex

Blue is the Warmest Color caused quite a stir among certain sensitive Cannes attendees. Curiously, not so much because of the sexual / romantic relationship between an underage adolescent and a woman in her 20s – the Older Woman would be a district attorney’s dream in a number of countries – but because Kechiche doesn’t refrain from graphic depictions of lesbian sex. You’d think we’re in 1913 – but no, as those anti-gay marriage demonstrations in Paris make clear. This is very much 2013; believe it or not, twelve years after Stanley Kubrick’s 2001: A Space Odyssey.

In his Palme d’Or acceptance speech, Abdellatif Kechiche initially told the jury, “You made a mistake.” He then apologized for taking his time to get on with his Thank You’s. The director of the three-hour Blue Is the Warmest Color explained, “that’s my pace. I’m sorry.”

Besides paying homage to the late filmmaker Claude Berri, “who helped me to create my path,” Kechiche remarked on the “beautiful youth of France,” with its “spirit of freedom” and desire to “live together.” The Tunisian-born filmmaker then praised “another youth,” that of the Tunisian Revolution, with their desire to “live freely, express themselves freely, and love freely.” (Left unmentioned by Kechiche was France’s far-right youth, a strong presence in the Paris manifestations, and that another cultural revolution seems to be in order in Tunisia: last year, the head of Nessma television station was fined by a Tunis court following a – violently protested – broadcast of Marjane Satrapi and Vincent Paronnaud’s Persepolis.)

Once Kechiche was done, Adèle Exarchopoulos and Léa Seydoux took turns speaking while fighting back tears.

Both Adèle Exarchopoulos and Léa Seydoux, director-co-screenwriter Abdellatif Kechiche, and Blue Is the Warmest Color itself are all shoo-ins for the 2014 Césars and near-shoo-ins for the European Film Awards. Kechiche has already won two Best Director / Best Screenplay / Best Film Césars: for Games of Love and Chance (2003) and The Secret of the Grain (2007, produced by Claude Berri). Even so, he has never been shortlisted for the European Film Awards; yet, at the very least one nomination – Best European Film, Best Director, or Best Screenplay – is all but guaranteed later this year.

Needless to say, at this stage it’s impossible to know if Blue Is the Warmest Color will be France’s submission for the 2014 Best Foreign Language Film Academy Award. In case Kechiche’s NC-17 rating-bound lesbian love story is selected, that country’s film commission will be taking a major chance, as sexually explicit (or even quasi-explicit) movies – no matter how widely acclaimed – almost invariably fare poorly with the quite conservative Academy membership (and at the Victorian American box office). Examples include Pedro Almodóvar’s Bad Education, starring Gael García Bernal; Cannes jury member Ang Lee’s Lust, Caution, starring Tony Leung Chiu Wai and Wei Tang; and Steve McQueen’s Shame, starring Michael Fassbender and Carey Mulligan, all of which/whom were bypassed by the Academy. (Both Derek Cianfrance’s Blue Valentine, which earned Michelle Williams a Best Actress nomination, and Stephen Daldry’s The Reader, a multiple Academy Award nominee that earned Kate Winslet the 2008 Best Actress Oscar, were released with an R rating.)

In fact, a more likely French submission for the Academy Awards would be Asghar Farhadi’s divorce drama The Past / Le Passé, starring Tahar Rahim and this year’s Cannes Best Actress winner Bérénice Bejo. After all, both Farhadi and Bejo have been nominated for Academy Awards, with the former’s A Separation winning in the Best Foreign Language Film category in early 2012. That same year, Bejo was a Best Supporting Actress contender for Michel Hazanavicius’ eventual Best Picture winner The Artist. And let’s not forget that Tahar Rahim is the star of Jacques Audiard’s Best Foreign Language Film nominee A Prophet.

The “blue” in the English-language title Blue Is the Warmest Color refers to the hair color of Lea Seydoux’s character, Emma. The character’s blue dye is also referenced in the original French title of Julie Maroh’s graphic novel on which the film is based, Le Bleu est une couleur chaude (literally, “Blue Is a Warm Color”). The original French title of Abdellatif Kechiche’s film translates as “The Life of Adèle,” sometimes with the subtitle: “Chapters 1 and 2″.

Blue Is the Warmest Color cast

Besides Léa Seydoux and Adèle Exarchopoulos, the Blue Is the Warmest Color cast includes Jeremie Laheurte, Catherine Salée, Aurélien Recoing, and Sandor Funtek. Abdellatif Kechiche co-wrote the screenplay adaptation with Ghalia Lacroix (also the film’s co-editor), whom Kechiche referred to as his “soulmate” during his Palme d’Or acceptance speech. 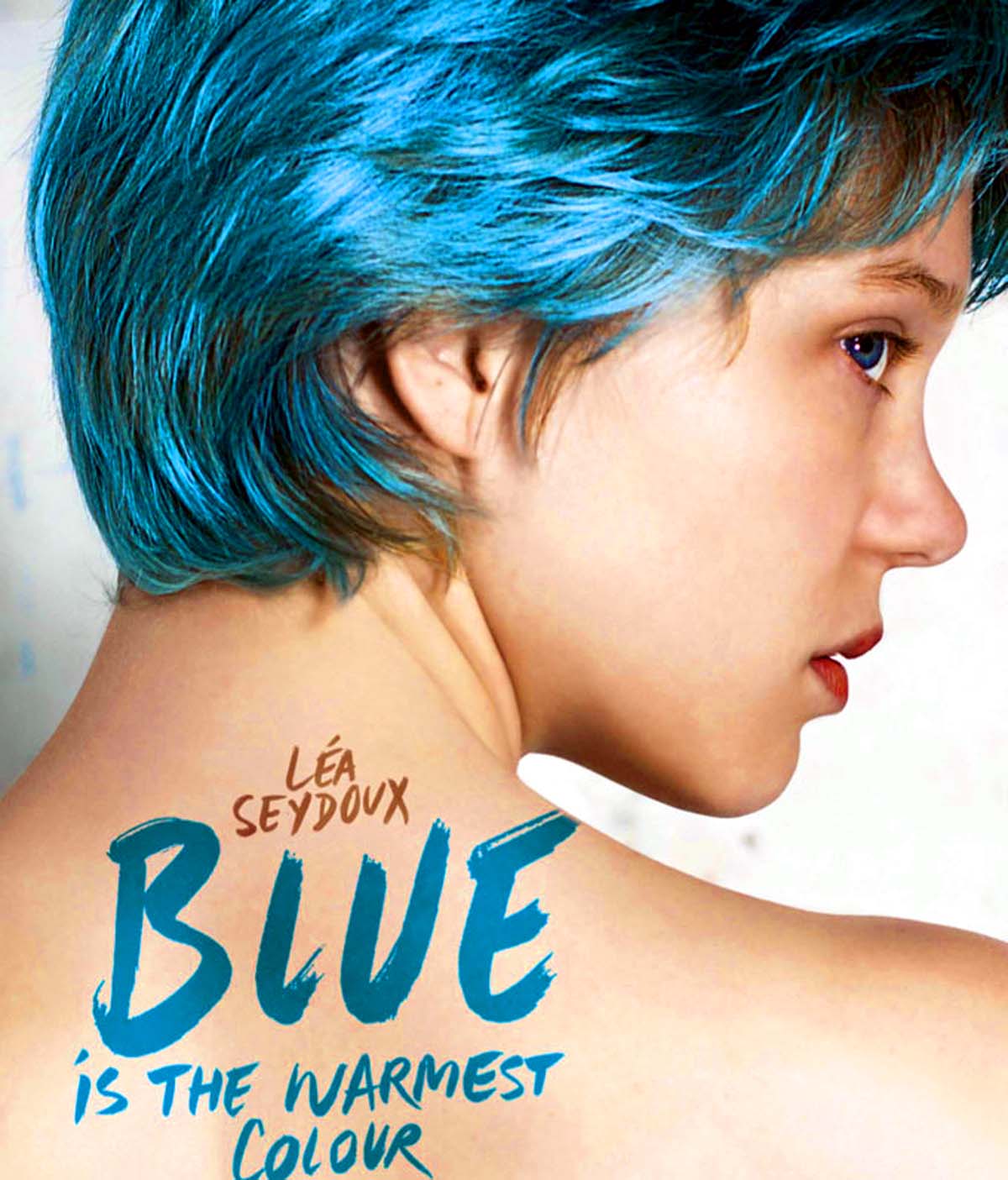 Blue Is the Warmest Color release in the United States

Abdellatif Kechiche’s Blue Is the Warmest Color, starring Léa Seydoux and Adèle Exarchopoulos, will be released in the United States via IFC Films’ Sundance Selects. As yet no date has been set, but it’ll quite possibly be some time during awards season in the fall. Distributed by IFC Films, Kechiche’s César-winning The Secret of the Grain took in a paltry $86,356 following its December 2008 North American release.

By the way, Sundance Selects has also acquired the North American rights to Cannes Film Festival’s Jury Prize winner Like Father, Like Son. Directed by Hirokazu Kore-eda (After Life, Nobody Knows), the film chronicles the dismay of two different sets of parents who discover that their 6-year-old sons were switched at birth. In the words of the Los Angeles Times’ Kenneth Turan, Kore-eda “is not only a master at working with children, he is an innately empathetic director with an exquisitely natural style, and this film manages to be sweet and gentle while asking pointed questions about the nature of family.”

Blue Is the Warmest Color release date in France

As La Vie d’Adèle, Blue Is the Warmest Color opens in France on October 9. As indicated in the previous post, the film’s English-language title better reflects the French title of the graphic novel on which the movie is based.

Now, stop and consider the fact that a graphic novel, when transferred to the big screen, can result in something other than The Dark Knight Rises, Iron Man 3, Man of Steel, Captain America: The Winter Soldier, The Avengers, or Thor: The Dark World. I’m not saying those movies are (or will be) necessarily bad; just that graphic novels offer mostly untapped possibilities that reach way beyond the costumed-superhero genre.

A bit of reality check: While the Cannes Film Festival awards ceremony was taking place, featuring – quite literally – the “likes” of jury members Steven Spielberg, Cristian Mungiu, Ang Lee, Naomi Kawase, Nicole Kidman, Lynne Ramsay, Vidya Balan, and Daniel Auteuil, moviegoers around the world were flocking to see product universes away from Blue Is the Warmest Color, Like Father, Like Son – or any of this year’s Cannes winners.

Justin Lin’s testosterone-packed, neuron-deficient Fast & Furious 6, featuring Vin Diesel, Paul Walker, and Dwayne Johnson, has raked up $275.5 million at the worldwide box office after only a handful of days in most territories. The number two movie at the North American box office this Memorial Day weekend was none other than Todd Phillips’ braindead-on-arrival The Hangover Part III, featuring Bradley Cooper, Zach Galifianakis, Ed Helms, and Justin Bartha, and which grossed an estimated $54.2 million.

All Cannes Film Festival 2013 winners combined will be lucky – immeasurably lucky – if they manage to earn during their entire worldwide run half of what Fast & Furious 6 earned during its first week.

Moral of the story: If movies were made only to please the world’s discerning (joke) moviegoers, adult – or “arthouse” – filmmaking would be all but dead. However imperfect, film festivals such as the one in Cannes serve to keep alive that increasingly marginalized segment of the film industry.

The 2013 Cannes Film Festival came to a close on Sunday evening. Abdellatif Kechiche’s Blue Is the Warmest Color, about the love affair between a woman in her 20s and another in her teens, took home the Palme d’Or.

Palme d’Or: Blue Is the Warmest Color / La Vie d’Adèle by Abdellatif Kechiche (Note: the jury made a point of giving the Palme d’Or to Kechiche and the film’s two leading ladies, Adèle Exarchopoulos and Léa Seydoux)

Grand Prix: Inside Llewyn Davis by Joel and Ethan Coen

Best Screenplay: Jia Zhangke for A Touch of Sin

Among the Cannes 2013 award presenters were Uma Thurman, Zhang Ziyi, and veteran Hollywood star Kim Novak, who was at the Croisette this year for a screening of the restored print of Alfred Hitchcock’s thriller Vertigo (1958). Audrey Tautou was the Mistress of Ceremonies.

Besides Michael Douglas and Matt Damon, others who failed to take home Cannes’ acting prizes were Tahar Rahim for The Past; Will Forte for Nebraska; Jeremy Renner, Marion Cotillard, and Joaquin Phoenix for The Immigrant; and Emmanuelle Seigner and Mathieu Amalric for Venus in Fur.

Cannes’ 2012 Best Actress winners were Cosmina Stratan and Cristina Flutur for Beyond the Hills, while the Best Actor award went to Mads Mikkelsen for The Hunt. Matteo Garrone’s Reality won the Grand Prix, Ken Loach’s The Angels’ Share won the Jury Prize, Carlos Reygadas was the Best Director for Post Tenebras Lux, and Cristian Mungiu won Best Screenplay for Beyond the Hills.

Léa Seydoux as the blue-haired Emma in the Blue Is the Warmest Color poster: Wild Bunch

LORE was a German / Australian co-production, much like AMOUR was an Austrian / German / French co-production (submitted by Austria, since France had THE INTOUCHABLES). THE PAST is a French production. Producer, cast, and most technical personnel are French. It wouldn’t “have” to go through Iran. In fact, if it went through Iran, that would be a stretch. Not impossible, but a stretch all the same. Sort of like considering PACIFIC RIM a Mexican movie because it was directed and co-written by Guillermo del Toro.

Farhadi’s film would have to go thru Iran, not France. In the same way the Cate Shortland’s LORE went via Australia and not Germany.