Leslie Caron will be on hand for the premiere of a new digital restoration of Vincente Minnelli’s 1958 Best Picture Oscar winner Gigi on Oct. 10 at 7:30 p.m. at the Academy of Motion Picture Arts and Sciences’ Samuel Goldwyn Theater in Beverly Hills. Film critic Stephen Farber will host an onstage conversation with Caron. (Note: This event is sold out. More information on additional tickets at the bottom of this article.)

“An Academy Salute to Leslie Caron” is being presented in cooperation with the American Cinematheque (website) and the Santa Monica Puppetry Center. On Saturday, Oct. 11, at 7:30 p.m., at the Aero Theater in Santa Monica, Caron will be the guest of honor at the inaugural Santa Monica Puppetry Festival with “A Celebration of Puppetry,” starring Mallory Lewis with Lambchop, and featuring guest appearances by Bob Baker, Tony Urbano, and Rene Zendejas. Some of the marionettes used in Lili (1953), one of Caron’s best-remembered films, will also be present. And – uh-oh – there’ll be a “Hi Lili, Hi Lo” audience sing-along.

On Sunday, Oct. 12, at 7:30 p.m., also at the Aero Theater, Caron will return for a screening of Lili. Film historian Leonard Maltin will chat with Caron following the movie.

Among French film actresses, Leslie Caron is an anomaly. She succeeded where Danielle Darrieux, Micheline Presle, Michèle Morgan, Catherine Deneuve, Isabelle Huppert, Simone Signoret, Jeanne Moreau, Brigitte Bardot, Miou-Miou, Isabelle Adjani, Danièle Delorme either failed or ignored: Hollywood. In fact, I can’t think of another French actress who became a real Hollywood star – and that includes Audrey Tautou and Juliette Binoche, the latter’s Oscar win notwithstanding. (Claudette Colbert doesn’t count as she grew up in the US. Frenchmen fared somewhat better on the American side of the Atlantic: think Charles Boyer, Maurice Chevalier, and Louis Jourdan.)

Born in Paris in 1931, the convent-educated, ballet-trained Caron became an MGM contract player in 1951 after being picked to play Gene Kelly’s youthful love interest in the Academy Award-winning An American in Paris, directed by Vincente Minnelli. Refreshingly natural-looking, with big eyes, big teeth, and all, Caron is fine in the film – an odd mix of highbrow art and lowbrow MGM goo that I find hard to take – but she could easily have gone the way of numerous other young performers of the 1950s that failed to click at a time when the studio era was coming to an end. 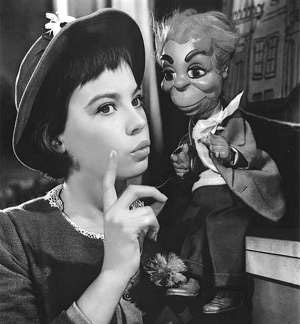 Instead, though stuck with French gamine roles during the early part of her career, Caron developed into a well-liked and well-respected actress, becoming a big star as a result of one such characters: in Lili she plays a naive girl (a part initially intended for Italian import Pier Angeli) who must choose between suave Jean-Pierre Aumont and stone-faced Mel Ferrer, all the while talking and singing with marionettes. It sounds sickening, but the film, directed by Charles Walters and written by Helen Deutsch, is actually quite charming chiefly because of Caron’s honesty. Years later, she told Turner Classic Movies’ host Robert Osborne that many predicted that the unabashedly sentimental Lili would bomb, though she took both the film and her role with the utmost seriousness.

During her heyday in the 1950s and 1960s, Caron was paired with several major names. She danced with Fred Astaire (in the sugary Daddy Long Legs), and acted opposite the likes of Farley Granger (A Story of Three Loves), Henry Fonda (The Man Who Understood Women), Dirk Bogarde (the British-made The Doctor’s Dilemma), Cary Grant (Father Goose), Rock Hudson (A Very Special Favor), and Warren Beatty (Promise Her Anything; Beatty and the soon-to-be-divorced Caron had a much-publicized affair), plus fellow Frenchmen Charles Boyer (Fanny) and Maurice Chevalier (Gigi, Fanny).

In his memoirs, Fred Astaire wrote about his Daddy Long Legs co-star: “Leslie Caron is a fine artist, conscientious, apt, serious. She hesitates to attempt anything either in dance or acting unless she is absolutely sure of herself. Leslie will hold up production for many minutes (or hours) on some occasions, until she feels complete control of what she’s about to do. I consider that a most commendable trait.”

Apart from Lili, my favorite Leslie Caron performances have nothing to do with naive gamines. Among those is her harrowing dramatic turn in René Clément’s Is Paris Burning?, in addition to Fanny (unmarried and pregnant by Horst Buchholz), Gigi (as a schoolgirl learning to become an upper-class “kept woman,” or rather, courtesan), and the British-made The L-Shaped Room (right, unmarried and once again pregnant, while making friends with a bunch of London misfits, among them an elderly lesbian beautifully played by Cicely Courtneidge). Caron, I should add, received best actress Oscar nominations and won British Academy Awards for both Lili and The L-Shaped Room.

Leslie Caron’s film career slowed down in the 1970s and 1980s – Eduardo de Gregorio’s Sérail, Ken Russell’s Valentino, François Truffaut’s The Man Who Loved Women, and Richard Dembo’s Oscar-winning Dangerous Moves are probably her best-known films of the period – though she still makes sporadic appearances in both film and television. Last year, she won an Emmy as Outstanding Guest Actress in a Drama Series for the Law & Order: Special Victims Unit episode “Recall.”

I found both Chocolat (2000) and Le Divorce (above, 2003) quite dreary, but I’m sure I’d have appreciated the former considerably more had Caron landed the Judi Dench role – instead of having what amounted to an extended cameo. As for Le Divorce, James Ivory’s cliché-ridden melodrama comes to life only when Caron is on-screen, playing a wealthy – and not-at-all naive – French matron.

Now, Gigi: Caron had played the role of courtesan-in-the-making Gigi on the London stage (Audrey Hepburn had played it in New York) before being assigned the part in the 1958 film version directed by Vincente Minnelli. (A 1949 French film was directed by Jacqueline Audry and starred Danielle Delorme.) Produced by MGM’s top Musical Man, Arthur Freed, Gigi, was a sizable critical and box office hit, eventually going on to win all nine of the Academy Awards for which it was nominated, including best director and best adapted screenplay for Alan Jay Lerner – who also wrote the film’s songs with Frederick Loewe.

Strangely, no cast member received an Oscar nod. Besides Caron, those ignored by the Academy were Louis Jourdan (above, cast in place of first-choice Dirk Bogarde), as the rich playboy who falls in love with Gigi; hammy Maurice Chevalier, actually quite charming for once, as the playboy’s uncle and the story’s narrator; the delightful Hermione Gingold; and The Art of Courtesanship tutor Isabel Jeans (right, instead of first choices Ina Claire and Irene Dunne). Also in the Gigi cast: Eva Gabor, Jacques Bergerac, and John Abbott.

Gigi‘s other stars were found behind the camera: cinematographer Joseph Ruttenberg, and production and costume designer Cecil Beaton. Caron credits the latter for the film’s sumptuous and – according to her – spot-on look. (Gigi interiors were shot at the MGM lot in Culver City; exteriors were filmed in Paris.)

Though its reputation – much like that of George Cukor’s My Fair Lady – has faded somewhat over the years and despite the fact that Colette’s risqué 1944 story was bowdlerized so as not to offend either American prudishness or Production Code censors, Gigi, even if a tad too stately, remains one of the most enjoyable of all MGM musicals. Gigi also happened to become a fitting curtain-closer for that studio’s musical unit.

As for those who find both the plot and Chevalier’s rendition of “Thank Heaven for Little Girls” dirty, disgusting, revolting, and possibly satan-inspired, I’d suggest getting themselves a life and, while at it, a brain opener as well. After all, Gigi is a determined individual out to create her own life no matter what others find appropriate for her – and in any case, she was supposed to have grown into a kept woman, not an unkempt one.

Reminiscing about Gigi for the Los Angeles Times, Caron remarked, “It’s really amazing when you make a film like that. It’s nice and lovely and you’re having a great time, but you never think it’s going to be mentioned or screened 50 years later. It never occurs to you.”

Note: “An Academy Salute to Leslie Caron” is sold out. Additional tickets typically become available at the last minute due to no-shows or cancellations. Consequently, there will be a stand-by line, which will form at the corner of Almont Drive and Wilshire Boulevard. Stand-by numbers will be given out at approximately 5:30 p.m. The number of stand-by tickets to be sold will be determined shortly before the start of the event. All seating is unreserved. (Louis Jourdan is a Beverly Hills resident. I wonder if he’ll be making an appearance at the Salute.)

The Samuel Goldwyn Theater is located at 8949 Wilshire Boulevard in Beverly Hills. For more information call (310) 247-3600 or visit the Academy’s website.

Photos: Gigi images are courtesy of the Margaret Herrick Library.

“An Academy Salute to Leslie Caron” was presented by the Academy of Motion Picture Arts and Sciences on Friday, October 10, at the Samuel Goldwyn Theater in Beverly Hills. The event included a screening of a new restoration of the Academy Award-winning 1958 MGM musical Gigi, in which Caron stars as a teenage Parisian being schooled in the art of courtesan-ship.

Besides Leslie Caron in the title role, Gigi features a prestigious cast that includes veteran Maurice Chevalier (Best Actor Academy Award nominee for The Love Parade and The Big Pond, 1929-30), Louis Jourdan, Hermione Gingold, Isabel Jeans, Jacques Bergerac, Eva Gabor, and John Abbott. Curiously, not one of them was nominated for an Oscar for Gigi.

Below are Leslie Caron accompanied by producer Mike Medavoy (Zodiac), and actress Diane Baker (Journey to the Center of the Earth, The Silence of the Lambs); Leslie Caron and actress Ruta Lee, who was featured in the 1956 Caron movie Gaby; and pianist Michael Feinstein and film reviewer Leonard Maltin.

Here are a couple more French actresses to add to your list: Emmanuelle Béart and Julie Delpy.

As for the men, how about Gérard Depardieu and Yves Montand? And don’t forget Pepé Le Pew, an Oscar-winner after all.