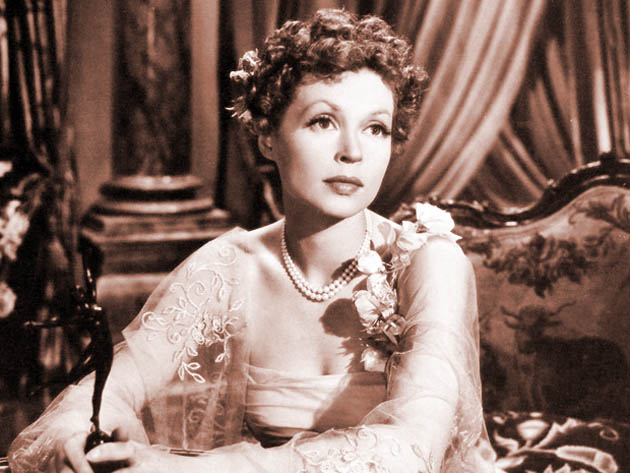 Directed by three-decade film veteran Maurice Elvey (The Wandering Jew, The Clairvoyant) from Stefan Zweig’s only full-length novel, Ungeduld des Herzens (“Impatience of the Heart,” published in 1939), the pre-World War I-set Beware of Pity (1946) tells the story of a paraplegic Central European baroness who learns a bitter lesson about the difference between pity and love.

Reportedly Elvey’s favorite among his films, Beware of Pity turned out to be a costly commercial flop that all but ended the filmmaker’s career. Somewhat surprisingly, its one bright box office light is supposed to have been none other than the now defunct Soviet Union.

In the cast: Albert Lieven (more on his alleged Soviet ties further below), Cedric Hardwicke, Gladys Cooper, Linden Travers, Ernest Thesiger, and, as the baroness, that most underrated of actresses, Lilli Palmer.

The same year Beware of Pity came out, Lilli Palmer, who had fled her native Germany for Britain in the 1930s (Palmer was Jewish), starred in her first American production, Fritz Lang’s spy thriller Cloak and Dagger, opposite Gary Cooper.

Palmer’s Hollywood career, however, never quite took off.

On the professional side, Cloak and Dagger and her follow-up star vehicles (My Girl Tisa, No Minor Vices) didn’t break any box office records (though Body and Soul was a sizable hit). On the personal side, husband Rex Harrison became romantically involved with actress Carole Landis (Topper Returns, I Wake Up Screaming), who killed herself at age 29 in 1948. A major scandal ensued.

Her Hollywood disappointment notwithstanding, in the next three decades Palmer would keep on working – in movies, on television, and on stage – on both sides of the North Atlantic.

Notable Lilli Palmer films, some of which may pop up on TCM in the future, include:

Never even nominated for an Academy Award, Lilli Palmer did receive some well-deserved recognition elsewhere.

She was the Best Actress winner at the 1953 Venice Film Festival for her portrayal of Rex Harrison’s wife through the decades in Irving Reis’ The Four Poster (which debuted in New York City in late 1952), and at the 1965 San Sebastián Film Festival for her murderous Nazi agent – actually a supporting role – in Michael Anderson’s World War II drama Operation Crossbow.

After four more German Film Award nominations[5], in 1978 Lilli Palmer was given an Honorary Award for the bulk of her career.

In the United States, she was shortlisted for two Golden Globes: Best Actress in a Comedy or Musical for Walter Lang’s But Not for Me (1959), and, in the TV categories, Best Supporting Actress for Marvin J. Chomsky and Lawrence Schiller’s miniseries Peter the Great (1986).

Lilli Palmer’s final film appearance was in a supporting role in John Frankenheimer’s meandering 1985 thriller The Holcroft Covenant, starring Michael Caine. She died at age 71 in January of the following year in Los Angeles.

From 1957 to her death she was married to Argentinean actor Carlos Thompson, who committed suicide at age 67 on Oct. 10, 1990, in Buenos Aires.

Palmer’s autobiography, Change Lobsters and Dance, was published in 1975. 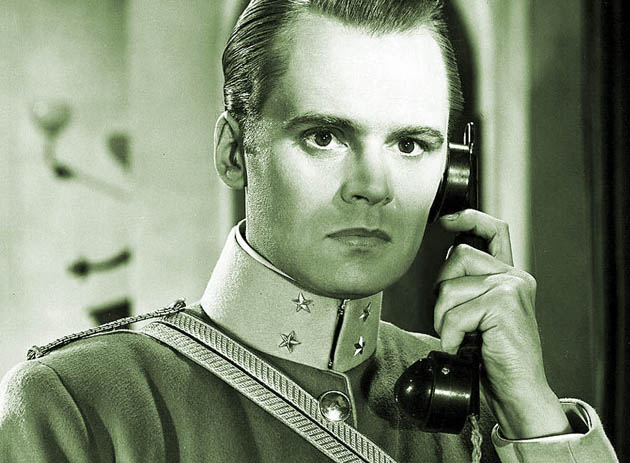 Albert Lieven in Beware of Pity. Whether or not accurately (there doesn’t seem to have been any confirming evidence), in the early 1940s the British secret service feared that German-born actor Albert Lieven (Frieda, Sleeping Car to Trieste) and, particularly, his Russian-born wife Tatiana (a.k.a. Tania) were communist agents. In Beware of Pity, Albert Lieven plays Lt. Anton Marek, who paraplegic Central European baroness Edith de Kekesfalva (Lilli Palmer) mistakenly believes has fallen in love with her in the days leading up to the assassination of Archduke Franz Ferdinand of Austria and the outbreak of World War I.

Another ‘Beware of Pity’-Soviet Union connection

Lastly, besides box office revenues Beware of Pity has another curious Soviet Union connection: German-born leading man Albert Lieven, who in 1937 fled to the United Kingdom with his Jewish, St. Petersburg-born wife Tatiana (1933–1944) – née Silberman to a well-to-do family. In the eyes of MI5, Tatiana, later known as Tania Lieven, was a possible Soviet spy.

As found in files released by the National Archives in the London district of Kew, Albert Lieven himself was suspected of being on his way to becoming a Communist Party member – and whatever that entailed. “Although Lieven himself does not share his wife’s extreme views,” reads one of the documents dated from 1941, “he’s in contact with communists and pro-communists and is too weak a character to remain uninfluenced by such contact.”

Yet there doesn’t seem to have been any concrete evidence that Lieven and/or his wife were actual Soviet agents.

Albert Lieven was seen in more than 70 features, ranging from Hans Steinhoff’s A Woman of No Importance / Eine Frau ohne Bedeutung (1934) in Germany to J. Lee Thompson’s Anglo-American, Oscar-nominated World War II drama The Guns of Navarone (1961). He died at age 65 on Dec. 22, 1971, in London. Rugby player Toby Flood is his grandson.[6]

A few years after her divorce and 1946 marriage to actor Miles Malleson (Kind Hearts and Coronets, Murder Ahoy), Tania Lieven – according to MI5, “a dangerous woman and one who has been completely gripped by the communist mania” – became a television actress, director, and producer, handling episodes for, among others, the anthology series ITV Play of the Week and ITV Television Playhouse. She died at age 69 in November 1978 in London.

Back to Turner Classic Movies’ post-Christmas 2010 presentations: directed by and featuring silent film comedian Larry Semon (as the Scarecrow and a couple of other characters), the 1925 version of The Wizard of Oz is TCM’s Silent Sundays offering.

This lesser-known filmization of L. Frank Baum’s novel features Dorothy Dwan in the role that would become associated with Judy Garland – especially in the minds of some American gay men, a mystery that remains as unfathomable as the casting of Billie Burke as the Good Witch Glinda in MGM’s opulent 1939 release.

Really, why Judy’s Dorothy as a gay icon? Why Dorothy to begin with? Why not Toto?

It’s definitely puzzling, especially considering the movies’ myriad other gay icon possibilities, ranging from Barbara Stanwyck in Baby Face and Norma Shearer in Let Us Be Gay to (gay actor) Ramon Novarro in Ben-Hur and John Wayne in Ride Him, Cowboy. 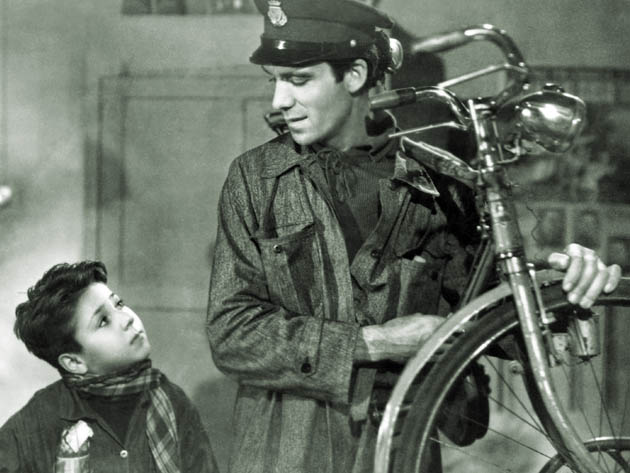 Bicycle Thieves with Enzo Staiola and Lamberto Maggiorani on Turner Classic Movies: is Vittorio De Sica’s neorealist classic about the struggles of post-World War II Italy’s working class one of the greatest “conservative” movies ever made? Well, if you’re completely insane, yes, you’d see it as a “conservative” film. As an aside, children had key roles in several early De Sica films (The Children Are Watching Us, Shoeshine); in Bicycle Thieves, Enzo Staiola plays the young son of one of the title characters.

‘Bicycle Thieves’ one the greatest ‘conservative’ movies ever made?

Leaving this baffling gay icon mystery behind, Albert Lamorisse’s Academy Award-winning short The Red Balloon (1956) will follow The Wizard of Oz, and then Turner Classic Movies will present Vittorio De Sica’s Special Academy Award recipient[7] Bicycle Thieves / Ladri di biciclette (1948), considered by some to be one of the greatest cinematic achievements ever.

Now, one of the most bizarre commentaries ever about Bicycle Thieves was written by a right-wing magazine contributor who listed De Sica’s neorealist effort as one of the greatest “conservative” movies ever made.

Bicycle Thieves was labeled “conservative” because, according to the writer, De Sica’s socially conscious drama about the indignity of poverty, the obscenity of income maldistribution, the degradation of our human-fucks-over-human world is actually about a man’s inalienable right to own and keep material things – i.e., the lead character’s eventually stolen bike.

Back to reality and sanity: non-professional actors Lamberto Maggiorani and Enzo Staiola are flawless as father and son struggling to eke out a living in post-World War II Italy. In fact, they make most pampered, overpaid Hollywood performers – then and now – look like inept amateurs.

If you haven’t watched Bicycle Thieves, you must. And if you already have, well, it’s always worth another look. Who knows, you might be able to find some hidden “conservative” elements in it.

[2] Adorable Julia is based on Guy Bolton and W. Somerset Maugham’s 1941 stage adaptation of the latter’s 1937 novella Theatre. Renamed Being Julia and starring Annette Bening, István Szabo’s 2004 version was officially an adaptation of the novella itself.

[3] Le rendez-vous de minuit is not to be confused with Rendez-vous à minuit, the French title of Lewis Seiler’s 1940 crime flick It All Came True, featuring Ann Sheridan, Jeffrey Lynn, and Humphrey Bogart.

[4] Also in early 1957, Ingrid Bergman won the Best Actress Academy Award for her performance as a fictionalized Anna in Anatole Litvak’s English-language Anastasia.

[5] Besides Mädchen in Uniform (at the 1959 ceremony) and Adorable Julia (belatedly, in 1966), Lilli Palmer’s two other Best Actress German Film Award nominations were for Harald Braun’s The Glass Tower / Der gläserne Turm (1957), as a frustrated married socialite eager to revive her stage career; and for the period drama The Dance of Death / Paarungen (1967), Michael Verhoeven’s adaptation of August Strindberg’s play.

[6] Toby Flood’s grandmother was Here Come the Huggetts and Small Town Story actress Susan Shaw, with whom, as per online sources, Lieven was married from 1949–1953.

Coincidentally, Shaw, who developed a serious alcohol problem, died at age 49 in the same month – November 1978 – as Tania Lieven.

[7] Bicycle Thieves’ Special Oscar was for the “most outstanding” foreign-language film released in the U.S. in 1949. Non-English-language movies would get their own regular Oscar category only at the 1957 ceremony.

Tania Lieven’s background is mentioned in Andrew Malleson’s Discovering the Family of Miles Malleson 1888 to 1969.