Anthony Slide 3 years ago
Lillian Gish: The Birth of a Nation actress enmeshed in Bowling Green University controversy. Should Lillian Gish be labeled a racist because at age 21 she had one of the lead roles in D.W. Griffith’s landmark – and to this day contentious – 1915 Civil War epic The Birth of a Nation, which features the Ku Klux Klan in a glorifying light and some Southern blacks (oftentimes played by white actors in blackface) as menacing and/or pathetically sub-human creatures? If so – despite her having starred in a series of humanistic dramas (e.g., Broken Blossoms, Way Down East, The Enemy), and her standing as one of the iconic actresses of the 20th century – should a scarlet “R” be stamped on the Gish name from now on?
Contents hide
1. Bowling Green University Lillian Gish Theatre is no more: The outraged ones vs. iconic 20th-century film & stage actress
1.1. ‘Racist by default’
1.2. Eva Marie Saint & Lillian Gish manager James Frasher
1.3. Disturbing silence
1.4. Bowling Green University’s film celebrity theaters

The Dorothy and Lillian Gish Theatre opened at Bowling Green State University, Ohio, on June 11, 1976. It ceased to exist this past May 3. The reason for its sudden disappearance lies in the success of “political correctness” and the failure of society to acknowledge and honor history.

And Lillian Gish was very much a part of Ohio history. She was born in Springfield (on Oct. 14, 1893) and made her stage debut as a child at the Risingsun Opera House, 20 miles from Bowling Green.

It was Lillian who insisted that the theatre also honor her sister and fellow Ohio native Dorothy (born in Dayton on March 11, 1898), who had co-starred with her in two D.W. Griffith features, Hearts of the World and Orphans of the Storm.

The Dorothy and Lillian Gish Theatre was originally located – with a gallery of Gish-related exhibits – in the University’s Hanna Hall. When the Hall was scheduled for demolition in 2018, the theatre basically disappeared except the signage for it and a small exhibit, which were moved to a classroom in the Student Union. And then the forces of outrage began to gather.

The Black Student Union complained that because Lillian Gish was the star of Griffith’s The Birth of a Nation, the use of her name in a Student Union facility contributed to an “intimidating, even hostile, educational environment.” The students adopted the ugly social media hashtag #DitchtheGish to forward their agenda to the University bureaucracy.

It mattered not that Lillian Gish had neither directed nor written The Birth of a Nation. Lillian’s performances in Griffith films such as Intolerance or Broken Blossoms, with their strong liberal leanings, were irrelevant.

Her career as one of the greatest silent screen stars, whose later performances continue to be highly regarded, counted for nothing. She was a racist by default.

And just because The Birth of a Nation cannot be screened today, more than 100 years after its completion, apparently because of the power of its subject and its message, so must Lillian Gish be consigned to the trash can of history. 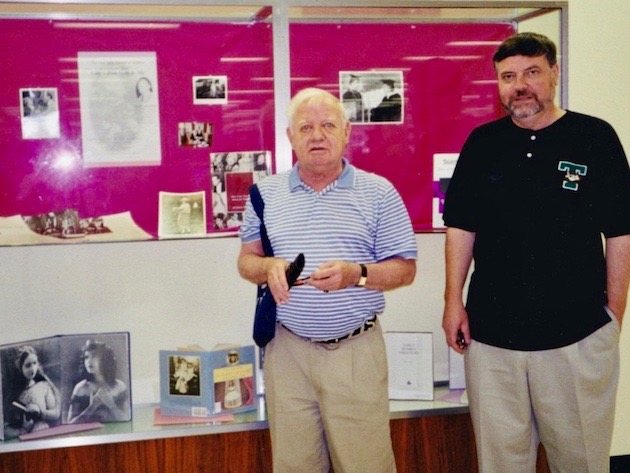 Lillian Gish manager James Frasher and film historian Anthony Slide next to Lillian and Dorothy Gish memorabilia at Bowling Green University. Throughout her 75-year show business career, Lillian Gish was seen in more than 100 features and shorts, in addition to dozens of plays and TV productions. Among her notable non-D.W. Griffith movies are Christy Cabanne’s Sold for Marriage (1916), Henry King’s The White Sister (1923) and Romola (1924), Victor Sjöström’s The Scarlet Letter (1926) and The Wind (1928), King Vidor’s La Bohème (1926) and Duel in the Sun (1946, Best Supporting Actress Oscar nomination), Charles Laughton’s The Night of the Hunter (1955), Robert Altman’s A Wedding (1978), and Lindsay Anderson’s The Whales of August (1987). An Honorary Oscar and Kennedy Center Honor recipient, Lillian Gish died at age 99 in February 1993.

The board of advisors of the Dorothy and Lillian Gish Theatre was chaired by Eva Marie Saint (Best Supporting Actress Oscar winner for On the Waterfront, 1954) and Lillian Gish’s manager, James Frasher.

Eva Marie cancelled a planned visit to the University, but the latter claims it had nothing to do with the Gish Theatre debacle.

Jim Frasher was asked to respond in writing to some questions the university had in regard to Lillian but he refused, finding such questions offensive. As Jim said to me, “It is like the beginning of something that shouldn’t be happening in this country.”

Little has been reported of what has taken place at Bowling Green University. The Associated Press carried a brief news item, reprinted in the Washington Post, but neither the trade papers nor the Los Angeles Times considered this story worthy of comment.

I have been on the board of advisors of the Dorothy and Lillian Gish Theatre almost since its inception, and I have received no communication from Bowling Green University as to its actions.

Does nobody care anymore?

Perhaps we are all parties, unwilling or not, to the obscenity of political correctness. 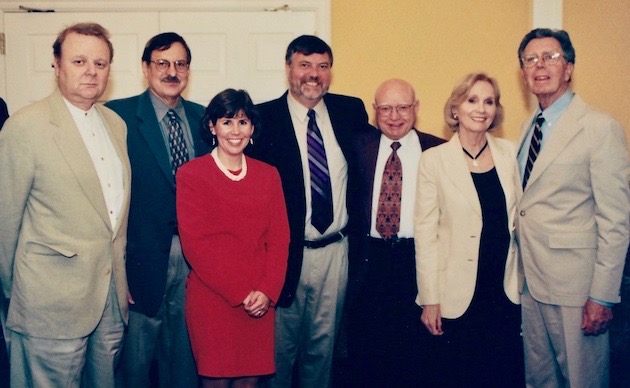 The Eva Marie Saint Theatre, honoring one of the University’s most famous alumnae, was downsized a few years back. The Joe E. Brown Theatre was named after the Ohio native, who starred in a production of Harvey at Bowling Green in 1959; it closed in December 2011 and is now used for storage.

“Lillian Gish Bowling Green University Theatre Is Gone: The Perennially Outraged Ones vs. Iconic 20th-Century Actress” last updated in May 2019.

Fascinating. I enjoyed Mr. Slide giving us some during one movie screening once. I believe it was at UCLA or some other UC. It ws a long time ago. Loved this website! Great looks and plenty of interesting stuff. Thank you.