Ever since it was announced that Steven Spielberg was going to direct an Abraham Lincoln biopic, film pundits, bloggers, lovers, and gossipers immediately began predicting Oscar nominations – and/or victories – for the film, its director, its crew, and its stars (whoever they might be; later on, specifically for Daniel Day-Lewis once his name became attached to the project).

But wait. That’s a photo, people! If there’s any Academy Award “indication” in it, it’s not for Daniel Day-Lewis or Steven Spielberg, but for the film’s make-up artists. I’d have liked to have included their names here, but the IMDb Lincoln page has a long list of make-up artists. It’s unclear which one(s) of those was/were responsible for Lincoln’s nose.

As for Daniel Day-Lewis’ performance as Abraham Lincoln … Well, before preparing any Oscar acceptance speech, Day-Lewis should at least wait before the Lincoln trailer comes out. At the very least. The same goes for Steven Spielberg, whose historical forays have been hit (Munich, Schindler’s List) and miss (Empire of the Sun, Amistad). And let’s not forget last year’s hyperbole before the release of Spielberg’s War Horse, which eventually managed to earn six Academy Award nominations (including Best Picture), but no wins.

Directed by Steven Spielberg and based on Doris Kearns Goodwin’s Team of Rivals: The Political Genius of Abraham Lincoln, the Lincoln screenplay was written at various stages by John Logan (The Aviator), Tony Kushner (who rewrote some of Munich), and playwright-turned-screenwriter Paul Webb (the upcoming Selma).

A DreamWorks / Disney and 20th Century Fox production, Lincoln opens in the United States on Nov. 16.

The Academy of Motion Picture Arts and Sciences’ Scientific and Technical Awards Committee announced earlier today that seven scientific and technical achievements “have been selected for further awards consideration.” They are:

As per the Academy’s press release, the list of achievements in contention “is made public to allow individuals and companies with similar devices or claims of prior art the opportunity to submit their achievements for review.” The deadline to submit additional entries is at 11:59 p.m. PT Tuesday, August 28.

The release adds that “after thorough investigations are conducted on each of the entries, the committee will meet in early December to vote on recommendations to the Academy’s Board of Governors, which will make the final awards decisions.”

The 2012 Scientific and Technical Awards will be presented at the Beverly Wilshire Hotel in Beverly Hills on February 9, 2013.

Claims of prior art or similar technology must be submitted on the Academy’s website at oscars.org/awards/scitech/apply.html. For further information, contact Awards Administration Director Rich Miller at (310) 247-3000, ext. 1131, or via e-mail at scitech@oscars.org. 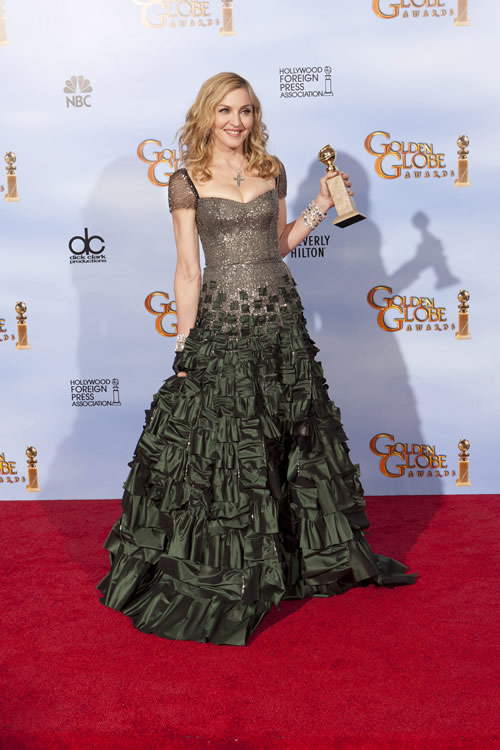 Madonna at the Golden Globes.

The Hollywood Foreign Press Association has announced that winners of the Golden Globes 2013 will be handed their shining globes on Sunday, January 13. Second to the Oscars, the Golden Globe awards ceremony is the biggest night on Hollywood’s awards-season calendar. (Image: Madonna 2012 Golden Globe winner for Best Song.)

Since the Academy Award nominations will be announced two days after the Golden Globes ceremony, next year’s Globe wins will not affect Oscar nominations. On the other hand, Golden Globe nominations will, as usual, catch the attention of Academy voters, even if only because of all the related publicity for key awards-season contenders. The Globe nods will come out on Thursday, December 13.

Something else worth noting is that by having the Golden Globes ceremony before the Oscar nominations are announced, the Hollywood Foreign Press Association is giving a chance to studios and interested parties to, pardon the bad pun, party the night away. Here’s the Academy of Motion Picture Arts and Sciences’ Regulation 16 for the 2013 Academy Awards. Make sure to read the final sentence in the second paragraph below:

Members may not be invited to or attend any non-screening event occurring after nominations are announced (and until final polls close), including breakfasts, lunches, dinners, parties and receptions, that in any way promotes or honors a nominated film, a nominee, or is attended by a nominee or anyone with a direct association with a nominated film. These regulations apply to nominees as well as Academy members, and nominees are similarly prohibited from attending such events. Invitations to non-screening events are also subject to the limitations on the number of mailings in Rule 3.

Zadan and Meron’s extensive television credits include the series SMASH and the TV movies A Raisin in the Sun, Gypsy, Brian’s Song, The Music Man, The Reagans, and the upcoming Steel Magnolias, with Queen Latifah. On Broadway, they produced the Tony Award-winning revivals of How to Succeed in Business Without Really Trying and Promises, Promises.

Among their handful of movie credits are the Footloose and Hairspray remakes, and The Bucket List, with Jack Nicholson and Morgan Freeman. The duo also acted as executive producers on the Rob Marshall-directed 2002 Best Picture winner Chicago, while Zadan produced the original Footloose (1984).

I can’t wait for the Oscars, even if they’re six months away. Meron and Zadan will be great producers and hopefully they can find great hosts unlike years past. My coworkers at Dish and I are going to have an Oscar party we’re just starting to plan.

An Oscar is just an award. Acting is an art above any accolade. Please don’t cheapen it by using the Oscar as the end-all benchmark.

It’s not just a photo. It’s a portrait and a promise of greatness. Yes, this image is that compelling and strong. Lincoln is more than a promising movie. It’s more than interesting. It’s intriguing.

And it’s very encouraging that Spielberg waiting as long as was needed to finish the screenplay and tell this story. It’s not about Oscars, It’s about greatness.