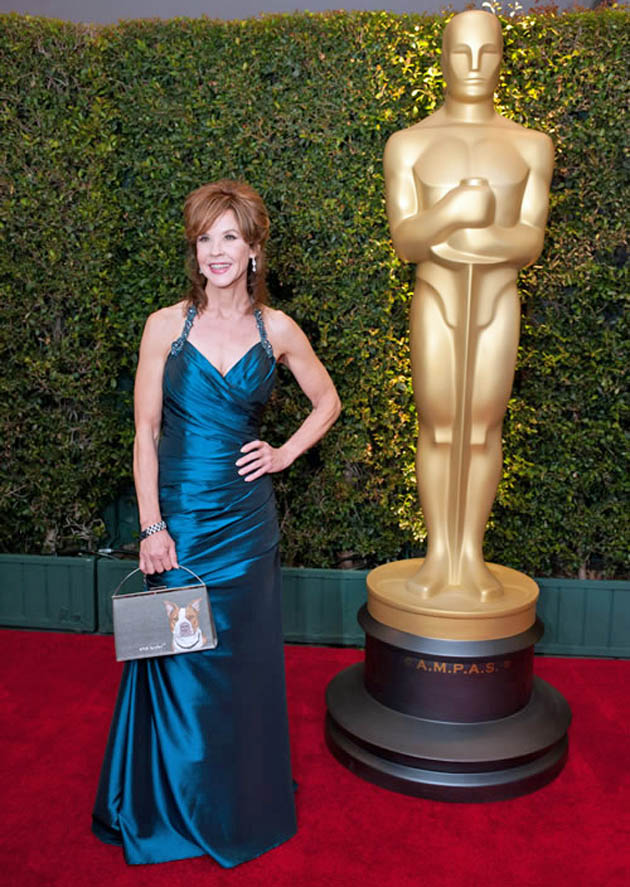 The Exorcist actress Linda Blair is pictured above while arriving at the Academy of Motion Picture Arts and Sciences’ 2011 Governors Awards, held in the Grand Ballroom at Hollywood & Highland in Hollywood, on Saturday, Nov. 12.

James Earl Jones (Field of Dreams, The Hunt for Red October) was a long-distance Honorary Oscar honoree, as he’s co-starring with Vanessa Redgrave in Driving Miss Daisy on the London stage. Oprah Winfrey, a 1985 Best Supporting Actress nominee for Steven Spielberg’s The Color Purple, attended the ceremony where she was handed the Jean Hersholt Humanitarian Award.

Also present was veteran make-up artist Dick Smith (Starman, The Cardinal), who will be turning 90 on June 26, ’12. His segment was introduced by Linda Blair herself, who, back in early 1974, was nominated for the Best Supporting Actress Academy Award partly thanks to Smith’s work, which transformed her from a cherub-faced, all-American young thing into a gargoyle-faced, all-demonic ancient one. (True, Mercedes McCambridge’s voice also did wonders for Blair’s performance in William Friedkin’s horror thriller, but that’s another story.)

Although a phenomenal worldwide hit, The Exorcist didn’t turn Linda Blair into a major box office draw. In fact, Blair, then in her mid-teens, would find more challenging roles on television. (See further below.)

Not helping matters, a sequel to The Exorcist, John Boorman’s Exorcist II: The Heretic (1977), was a dismal critical and commercial bomb despite its prestige director and cast – multiple Oscar nominee Richard Burton (My Cousin Rachel, 1952; Becket, 1964; etc.), Best Actress Oscar winner Louise Fletcher (One Flew Over the Cuckoo’s Nest, 1975).

Worse yet, in 1977 Florida police arrested Blair – then 18 – and about 30 other people (including two children of Democratic Florida senator Dan Scarborough) in an attempt to break an alleged drug ring. Blair was charged with drug possession and conspiracy to either buy or sell drugs. Eventually pleading guilty to the charge of conspiracy to possess cocaine, she received three years’ probation and a $5,000 fine.

According to (unverified) online sources, she would later say that following the scandal, her Hollywood career “went down faster than the Titanic.” Whether or not the quote is factual, that’s pretty much what happened.

On television, Linda Blair’s most important roles were those in three controversial TV movies of the 1970s:

Elizabeth Reaser of Twilight fame – Breaking Dawn – Part 1 opens Friday, Nov. 18, in North America – is pictured above while arriving at the Academy of Motion Picture Arts and Sciences’ 2011 Governors Awards, which took place in the Grand Ballroom at Hollywood & Highland in Los Angeles, on Saturday, Nov. 12.

In case you’re wondering, Rosalie and Jasper must have different surnames so they can shack up with their adoptive siblings without being accused of taking part in incestuous relationships. Not that that has stopped Anna Kendrick’s small-town high-schooler Jessica from gossiping about them: “But they live together! It’s weird!”

Her presence at the Governors Awards is in all likelihood related to Summit Entertainment / Lionsgate’s p.r. media blitz surrounding the release of Breaking Dawn 1. 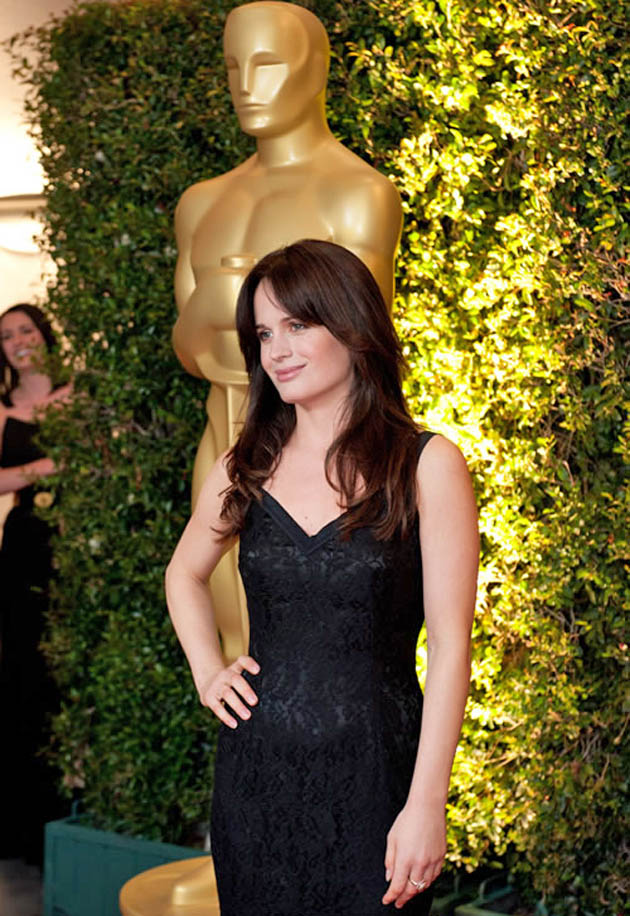 Elizabeth Reaser has been featured in more than 20 films since 2001. Besides the Twilight installments, her movie credits include:

She received a Best Actress Spirit Award nomination for Sweet Land. She lost to Shareeka Epps for Half Nelson.

As for her television work, Elizabeth Reaser is probably best known for her recurring role as Rebecca Pope in the series Grey’s Anatomy, which earned her an Emmy nomination (2007) in the Outstanding Guest Actress in a Drama Series category and a SAG Award nomination (2008) as a member of the series’ cast. 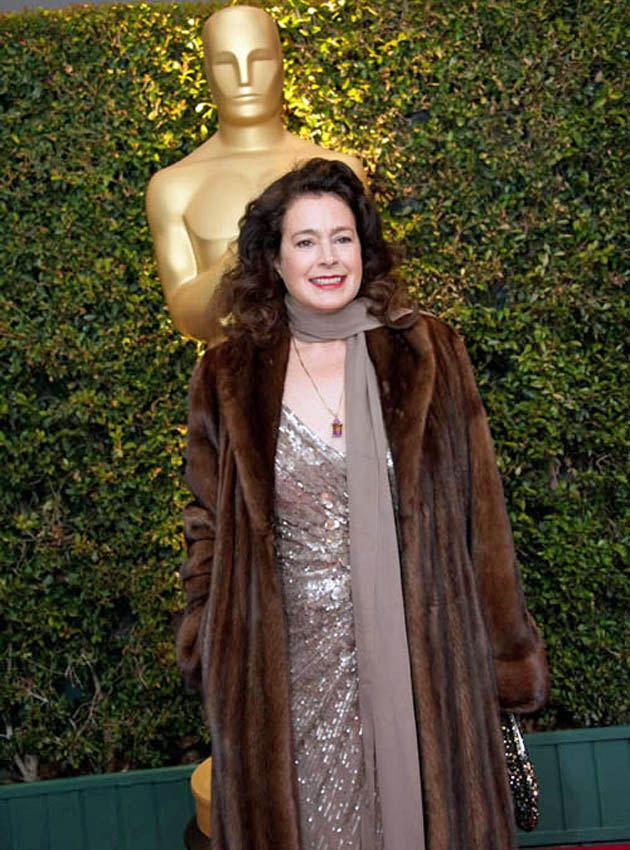 Veteran Blade Runner actress Sean Young is seen on the 2011 Governors Awards’ Red Carpet outside the Grand Ballroom at Hollywood & Highland. Like Elizabeth Reaser, Sean Young is not a 2012 Oscar hopeful; she has no movie coming out this year.

Since 1980, Sean Young has been featured in about 50 films. Among them are the following:

Sean Young has also been featured in less prestigious fare such as: 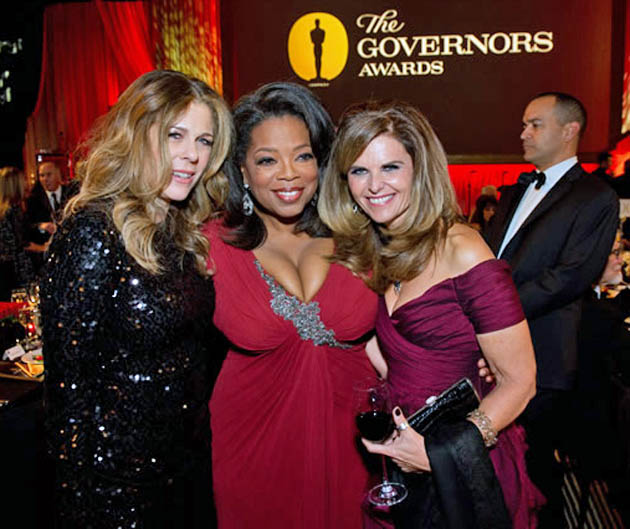 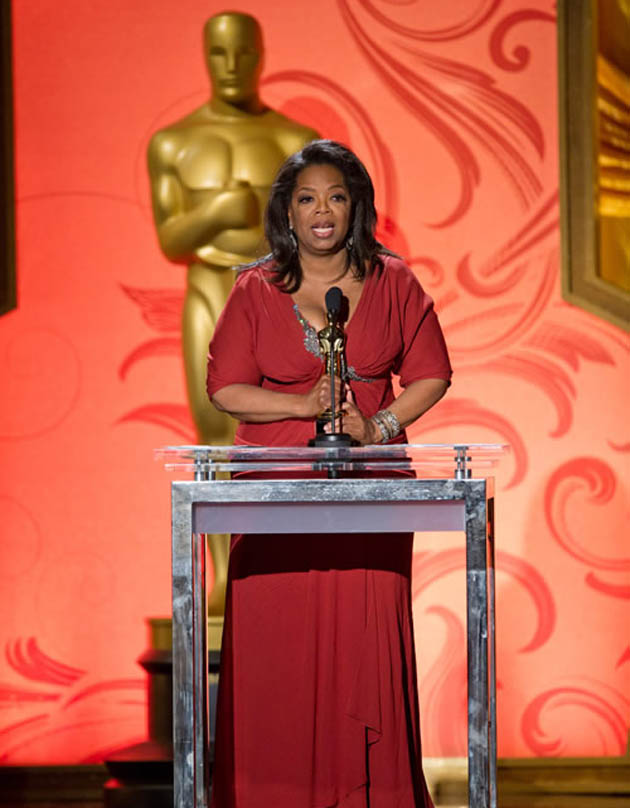 Many were surprised and/or upset that the 2011 Jean Hersholt Humanitarian Award was going to be handed to a television personality at the Academy of Motion Picture Arts and Sciences’ Governors Awards on Nov. 12. For although Oprah Winfrey did receive a Best Supporting Academy Award nomination for Steven Spielberg’s The Color Purple back in early 1986, the TV talk show host and billionaire entrepreneur’s participation in the world of filmmaking has been at best marginal.

Besides The Color Purple, among Winfrey’s rare forays into movies in the last quarter of a century are:

Academy President Tom Sherak came to Oprah Winfrey’s defense, asserting that she is “one of the most philanthropic performers in the world,” while adding that “she’s a member of the Academy” who has been nominated for an Academy Award – “and she has produced movies.”

Incidentally, Oprah Winfrey is only the sixth woman to receive the Jean Hersholt Humanitarian Award, first handed out at the 1957 Oscar ceremony – the year after actor (Greed, The Student Prince in Old Heidelberg) and former Academy President Hersholt’s death.

Winfrey’s predecessors – four of them actresses – were:

At the Governors Awards ceremony in the Grand Ballroom at Hollywood & Highland in Los Angeles, Oprah Winfrey reportedly wiped away a tear while receiving praise from a speaker onstage. She later took to the podium with a message straight out of Frank Capra’s It’s a Wonderful Life: “Your life matters. You matter. What you do matters.”

Not that anyone could possibly disagree. For better or for worse, what Winfrey said is both true and self-evident.

While onstage, Winfrey also plugged potential Best Picture Academy Award contender The Help through one of those inspirational speeches that pepper – or plague, depending on your take – award shows.

“I never imagined receiving an Oscar, especially for doing what is part of my calling, part of my being,” the 57-year-old told the crowd. “If you are not a former colored girl born in Mississippi in 1954, it is impossible for you to know what this journey has meant.”

Winfrey added that both her mother and grandmother had been maids just like the black women in the Tate Taylor sleeper hit, thus reminding everyone that among the countless children and grandchildren of black Southern maids a single one had gone on to become a billionaire TV celeb.

Tom Sherak’s only – however indirect – mention of the Brett Ratner-Eddie Murphy Oscar hosting/producing debacle was wryly asking the crowd, “How was your week?”

Sherak also paid a brief tribute to Oscar producers Laura Ziskin and Gilbert Cates, both of whom have died in the last few months.

And not that anyone has asked us, but…

How about a Jean Hersholt Humanitarian Award for Maurice and About a Boy star Hugh Grant, for his efforts in trying to save the world from Rupert Murdoch and his minions/whores in the British media, the British police, the British government, and elsewhere?

Oprah Winfrey quote about the journey from 1954 Mississippi to 2011 Hollywood & Highland via People.com. 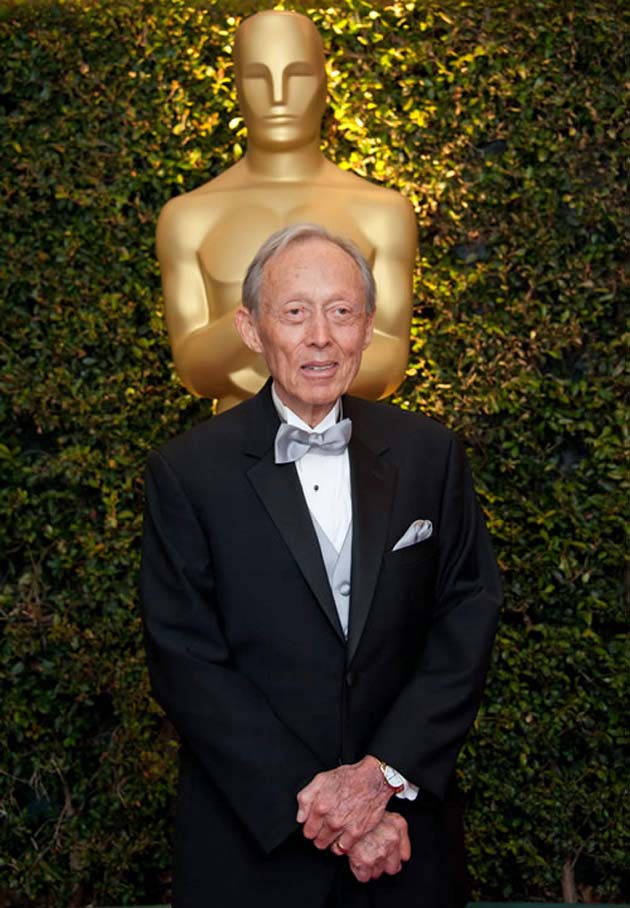 Oprah Winfrey was not the only Academy honoree on Nov. 12. Linda Blair introduced the presentation of the Honorary Oscar to veteran make-up artist Dick Smith, 89. Back in 1973, Smith transformed the then 13-year-old Blair into an iconic movie “monster” in William Friedkin’s blockbuster The Exorcist.

“For me, it was not as much fun as I think it was for Dick,” she recalled. “It was not a little girl’s dream.” Yet for her performance as a teenager possessed by a (literally) head-turning demon, Blair – assisted by the initially uncredited voice of Mercedes McCambridge – was shortlisted for that year’s Best Supporting Actress Academy Award.

Whether or not because it was revealed that her demon voice had actually been the work of the Best Supporting Actress Academy Award winner of 1949 (for Robert Rossen’s All the King’s Men), she lost the 1973 Oscar to the even younger Tatum O’Neal in Peter Bogdanovich’s Paper Moon.

Here are a few more titles: The World of Henry Orient, House of Dark Shadows, The Sunshine Boys, The Deer Hunter, Ghost Story, Starman, Death Becomes Her, and House on Haunted Hill. 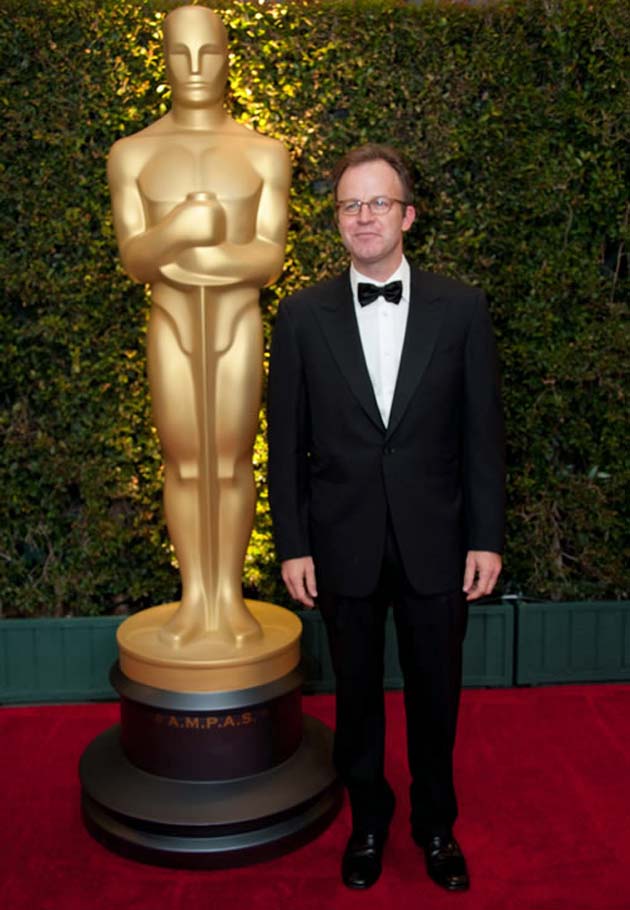 Tom McCarthy: ‘The Station Agent’ and ‘The Visitor’ screenwriter-director at the Governors Awards.

Actor and screenwriter Tom McCarthy on the Red Carpet

Pictured above is screenwriter Tom McCarthy (a.k.a. Thomas McCarthy) on the red carpet at the 2011 Governors Awards. The evening’s honorees were actor James Earl Jones, who had to accept his Honorary Oscar from London, make-up artist Dick Smith, and Jean Hersholt Humanitarian Award recipient and billionaire TV celebrity Oprah Winfrey.

Tom McCarthy has four screenplay/story credits: Up (which earned him an Oscar nomination, along with co-writers Bob Peterson and Pete Docter), The Station Agent, The Visitor, and Win Win. McCarthy also directed the last three titles.

As an actor, his movie credits include Meet the Parents, Syriana, Michael Clayton, Baby Mama, The Lovely Bones, and Little Fockers.

Whether as an actor, director, or screenwriter, Tom McCarthy has never worked on a feature project with James Earl Jones, Dick Smith, or Oprah Winfrey. But Win Win, featuring Paul Giamatti, Amy Ryan, and Bobby Cannavale, is a potential contender this awards season.