Hell’s Kitchen: Soul stew image likely from the 1922 Benjamin Christensen horror classic ‘Häxan / Witchcraft Through the Ages.’
Contents hide
1. Day of the Dead post: Cinema’s Top Five Scariest Living Dead
1.1. The walking living dead vs. the walking braindead
1.2. 5. Max Schreck in ‘Nosferatu’
1.3. 4. Peter Wyngarde in ‘The Innocents’
1.4. 3. Julian Beck in ‘Poltergeist II: The Other Side’
1.5. 2. Voice of Spanish-speaking dead man in The Sixth Sense
1.6. 1. Junio Valverde in The Devil’s Backbone

We should all be eternally grateful to the pagans, who had the foresight to come up with many (most?) of the overworked Western world’s religious holidays and festivities. Thanks to them, besides Easter, Christmas, New Year’s, and possibly Mardi Gras (a holiday in some countries), we also have Halloween, All Saints’ Day, and the Day of Dead. (Though inexplicably, no Day of the Living Dead.)

Since today marks the end of the annual Halloween, All Saints’ Day, and Day of the Dead celebrations – the latter two are public holidays in a number of countries with large Catholic populations – I’m posting my revised and expanded list of the movies’ Top Five Scariest Living Dead.

The walking living dead vs. the walking braindead

Of course, by “living dead” I don’t mean that the actors listed below were dead when the movies were made. Nor am I implying that, like the vast majority of zombified human beings on this planet, they merely go through the motions – in their particular case, on screen. Instead, I’m referring to the movies’ dead (or undead) characters who refuse to lie still.

Although oftentimes it’s nearly impossible to differentiate between the walking living dead and the walking braindead, I do my best here. In case you have authenticated proof that one (or more) of those listed below were neither dead nor undead when they scared the hell out of me, please drop me a line. I’ll remove the mislabeled living dead from this list and will include him/them in some other Top Five category at a future date.

I should add that films featuring nondescript masses of zombies, vampires, and ghosts – e.g., George A. Romero’s Night of the Living Dead, John Carpenter’s The Fog, Tobe Hooper’s Poltergeist, the Brad Pitt blockbuster World War Z – have been left out simply because no one living dead stands out in them. Also, Christopher Lee and Bela Lugosi may be cinema’s most famous impersonations of Count Dracula, but undead or no they’re anything but scary. And I won’t even get into Robert Pattinson & Co. in the Twilight movies.

And finally, the living dead listed below are all male. I didn’t set out looking for only male ghosts, vampires, and zombies, but that’s the way things have turned out. 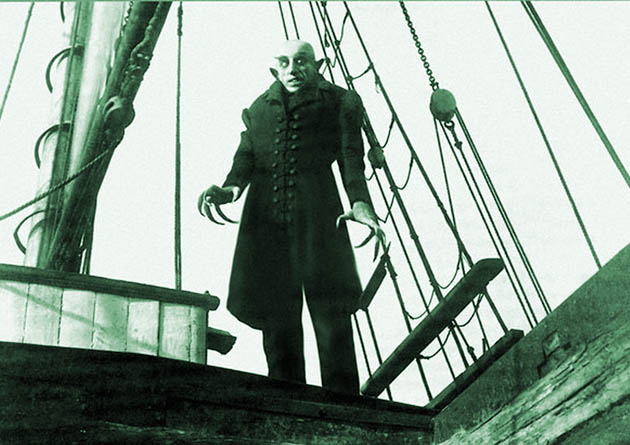 Max Schreck as the titular living dead – or rather, the titular undead – in ‘Nosferatu’ 1922: F.W. Murnau’s German silent cinema classic was a ‘Dracula’ rip-off.

Many consider F.W. Murnau’s 1927 romantic melodrama Sunrise, starring Janet Gaynor and George O’Brien as a couple who rekindle their love following both natural and marital disasters, to be his masterpiece. But as far as I’m concerned, nothing Murnau did that I’ve seen beats Nosferatu / Nosferatu, eine Symphonie des Grauens, thanks in large part to Max Schreck, the movies’ most undebonair vampire.

Starring Klaus Kinski in the title role and Isabelle Adjani as his object of desire, Werner Herzog’s 1979 remake, Nosferatu the Vampyre, is stylish and visually compelling. Yet it lacks the sense of foreboding found in Murnau’s 1922 horror classic.

In fact, Max Schreck is so convincing as the undead Count Orlok that some have wondered whether the actor was a vampire himself. Hence, E. Elias Merhige’s 2000 fantasy comedy Shadow of the Vampire, featuring Oscar-nominated Willem Dafoe as a blood-sucking Schreck and John Malkovich as an absurdly un-Murnauesque Murnau.

Born in Berlin in 1879, Max Schreck died in Munich in 1936. Nosferatu remains his greatest contribution to film. 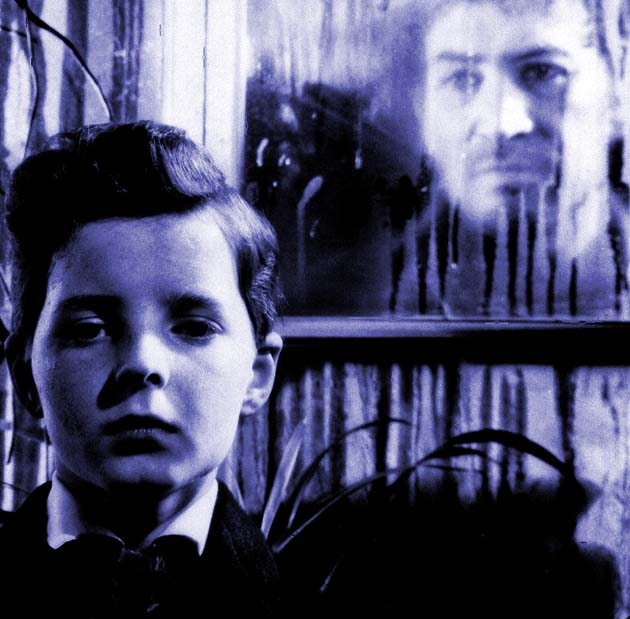 Peter Wyngarde in ‘The Innocents’: Repressed sex and the single living dead – a ghost who believes that youthful Martin Stephens would be a good receptacle for his sexually charged spirit.

4. Peter Wyngarde in ‘The Innocents’

When I first saw it as a kid, I loved Jack Clayton’s spooky 1961 ghost movie The Innocents, adapted by Truman Capote and William Archibald from Henry James’ novel The Turn of the Screw.*

Admittedly, The Innocents is the kind of movie that could have turned this Catholic school student into a remorseless serial killer – what with child sexuality (young siblings Martin Stephens and Pamela Franklin); incest (that’s Stephens and Franklin again); repressed female libido (prim and proper Christian governess Deborah Kerr); unprim, unproper, and unChristian sex fantasies (that’s Kerr again); and a highly eroticized male ghost (Peter Wyngarde) who possesses the little boy, turning him into a sex animal.

Luckily, The Innocents failed to lead me astray, for my vulnerable youthful psyche had already been debased by another 1960s repressed sex/unrepressed ghost tale, Robert Wise’s The Haunting (1963).

So, instead of becoming a pathological ax-wielding murderer, I merely developed a pathological fear of the dark that haunts me to this day. Thank you, Peter Wyngarde.

In the world of music esoterica, there’s the bizarre and there’s the utterly inexplicable. Peter Wyngarde’s When Sex Leers Its Inquisitive Head … falls into the latter category.

That also sums up much of what goes on in the brilliant The Innocents. 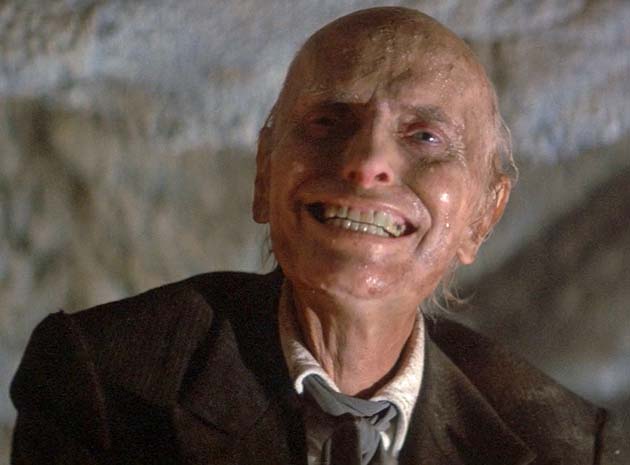 Julian Beck in ‘Poltergeist II: The Other Side’: Satanic living dead in the person of a deceptively righteous Christian clergyman.

3. Julian Beck in ‘Poltergeist II: The Other Side’

Brian Gibson’s Poltergeist II: The Other Side (1986) is one of the most tedious horror movies I’ve ever seen – and that’s saying a lot.* But this Poltergeist sequel did offer one memorable sequence featuring poet, avant garde theater multitasker, and The Living Theatre co-founder Julian Beck, who died at age 60 while working on the film in 1985.

As the Rev. Henry Kane, a demonic – and very much dead – Christian preacher, Beck doesn’t do much in his brief role. His underplaying, however, ends up making his character’s malevolence all the more bone-chilling.

In fact, I find Beck’s gargoylish, deeply wrinkled face, his eyes glinting with a mix of evil and cynicism – the man could easily have been one of those Holy Book-thumping politicians – much scarier than the better-known visages of Jason, Freddy, and Norman Bates’ mom.

* The list of horrible horror movies is just about endless, ranging from Stuart Gordon’s Re-Animator to Irvin S. Yeaworth Jr.’s The Blob. 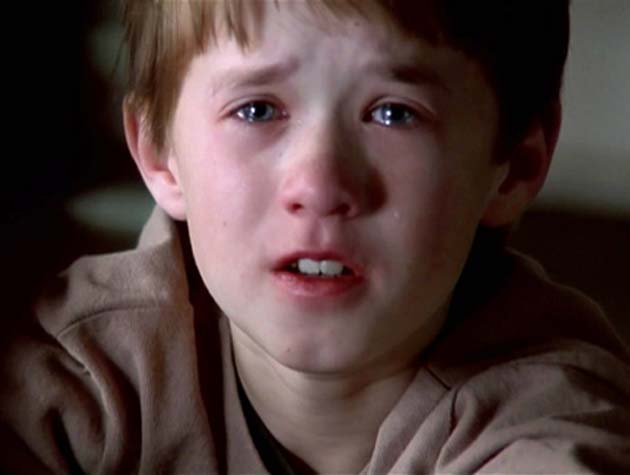 2. Voice of Spanish-speaking dead man in The Sixth Sense

In the 1999 blockbuster The Sixth Sense, Haley Joel Osment plays a young boy who not only sees dead people, but hears them as well. Bruce Willis, for his part, sees and hears what he wants to see and hear. As for me, I saw and heard what writer-director M. Night Shyamalan, cinematographer Tak Fujimoto, and the film’s sound mixers and editors wanted me to.

But scarier than Osment, Willis, the phony melodrama, the myriad plot holes, the dishonest ending, and the dead people you get to see was the dead person you don’t get to see in Shyamalan’s Oscar-nominated horror flick.

I’m referring to the voice in the recording that must be played backwards so you can hear a desperate Spanish-speaking man saying “I don’t want to die.” Granted, I found much in The Sixth Sense infuriatingly manipulative; yet I must admit that Shyamalan, apparently inspired by Japanese horror movies, succeeded in imbuing his film with the creepiest of atmospheres. 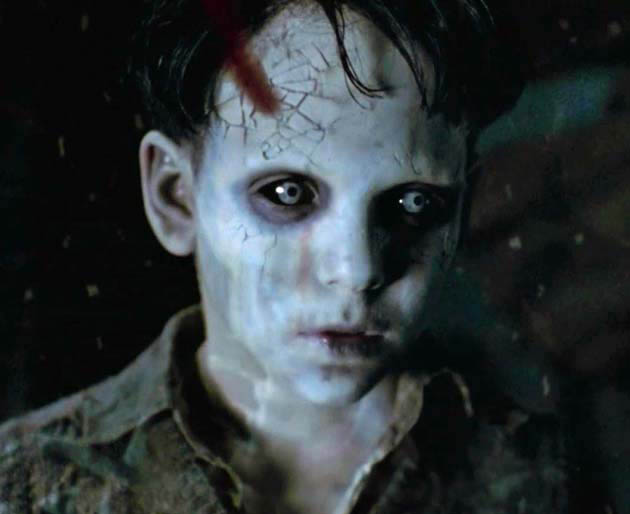 1. Junio Valverde in The Devil’s Backbone

When it comes to making my skin crawl while sitting in a movie theater, the pool sequence at the climax of Guillermo del Toro’s The Devil’s Backbone / El espinazo del diablo takes the top prize.

As greedy, murderous (and quite handsome) orphanage caretaker Eduardo Noriega falls into a muddy, underground pool, a very young and very dead boy (Junio Valverde) appears in the frame to embrace the horrified man. You can’t hear Noriega screaming underwater, but what a disturbing, macabre, ghoulish, sinister, creepy, ghastly, eerie movie moment. I hope I’ve made it clear that I was scared fucking witless.

Come to think of it, there are other such moments in del Toro’s atmospheric political allegory set during the Spanish Civil War. In fact, Peeping Toms and Janes should avoid The Devil’s Backbone at all costs. Else, they’ll never feel inclined to look through a keyhole again.

Former living dead Junio Valverde grew into a well-known actor in Spain after starring in the Spanish-set Western TV series Tierra de lobos (“Land of Wolves”), which ran 2010–2014. He made his directorial debut with the short Vert (2015), co-directed by actress Ana Corbi (Barrio Tales, Divergent).