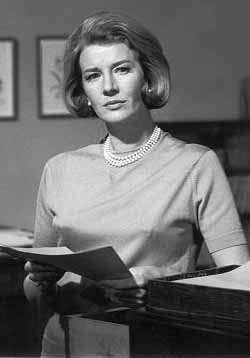 Actress Lois Maxwell, the devoted and perennially infatuated secretary Miss Moneypenny in a string of James Bond movies, died of cancer at the Fremantle Hospital in Perth, Western Australia, on Saturday, Sept. 29. She was 80.

Maxwell began playing Miss Moneypenny in 1962, in Sean Connery’s first James Bond movie, Dr. No. (She had been originally offered the part of one of Bond’s conquests, a role eventually played by Eunice Grayson.)

She continued as Miss Moneypenny until A View to a Kill 23 years later, with Roger Moore as the British spy. Moore (who will be turning 80 in a couple of weeks) gave up on Bond at that point, and the producers opted to replace the 58-year-old Maxwell with 26-year-old Caroline Bliss for The Living Daylights, starring Timothy Dalton.

Samantha Bond later took on the role of Miss Moneypenny, though the Miss was nowhere to be found in the most recent Bond, Casino Royale.

All in all, Maxwell appeared in a total of 14 Bond flicks – thus having more Bond mileage than any of the series’ leading men. According to the BBC obit, only Desmond Llewelyn, who played gadget man Q 17 times, appeared in more Bond movies. (Llewelyn died in 1999.)

“Miss Moneypenny was the smallest part I’ve ever played,” Maxwell said in a 2003 interview. “And I did it when my children were very young and my husband was very sick and I was very poor.” The role itself surely wasn’t that rewarding financially. Maxwell was never paid more than £100 a day for her appearances in the Bond films – and there weren’t that many days of work. As per the London Telegraph obit, adding up all her 14 Bond appearances Maxwell was on screen for less than an hour and spoke fewer than 200 words.

Born Lois Ruth Hooker in Kitchener, Ontario, on Feb. 14, 1927, Maxwell’s show business career started in radio. At 15, she moved to the United Kingdom with the Entertainment Corps of the Canadian army, and later studied acting at the Royal Academy of Dramatic Arts, where she first met Roger Moore.

In the late 1940s, she attempted a Hollywood career that failed to take off despite a Golden Globe for most promising female newcomer for her role in the Shirley Temple-Ronald Reagan box office disaster That Hagen Girl (1947).

She then made movies in Italy – e.g., Léonide Moguy’s drama Tomorrow Is Too Late (1950), opposite Vittorio De Sica and Pier Angeli; Duilio Coletti’s war drama La Grande speranza (1954), with Renato Baldini. When not working in front of the camera, Maxwell spent time driving race cars.

In the mid-1950s, reportedly after the end of an affair with the brother of an Italian prince, Maxwell returned to Britain where she met her husband-to-be, television executive Peter Marriott. (Marriott would later be screen-tested for the role of Bond.)

Following Dr. No in 1962, Maxwell’s film career was all but restricted to the James Bond films, though she kept busy on television appearing on shows such as The Saint, The Baron, and The Persuaders!. She went into semi-retirement after A View to a Kill, working only sporadically on television and in a couple of features.

In between acting jobs, Maxwell earned some extra cash by writing her own column for the Toronto Sun tabloid. Using the name “Moneypenny,” as per the London Telegraph she espoused “trenchant right-wing opinions” from 1979 to 1994.

After being diagnosed with cancer, she moved to Australia in 2002 to be near her son. She and Marriott, who died of a heart attack in 1973, also had a daughter.

At the time of her death, she was working on her autobiography, to be called Born a Hooker.

Remembering her most famous role, Lois Maxwell told a Canadian newspaper in 2001: “Moneypenny was down to earth and charming. Everyone hoped James Bond would end up with her because all the other women were so two-dimensional. She was real.”

“I think it was a great disappointment to her that she had not been promoted to play [Miss Moneypenny’s boss] M” Roger Moore told the BBC. “She would have been a wonderful M.” (In the last decade, that role has been played by Judi Dench.)

The Thief and the Cobbler: Academy Premiere of Animated Modern Classic Original Version