Anna Robinson 13 years ago
Lord of the Rings prequel of sorts: Born of Hope.

Beginning on Dec. 1, the Lord of the Rings prequel of sorts Born of Hope will make its exclusive debut on Dailymotion.

Directed by Kate Madison, and written by Alex K. Aldridge with the assistance of Christopher Dane, who also stars as Arathorn, Born of Hope is an original prequel based on the J.R.R. Tolkien trilogy and, as per the film’s press release, featuring “a host of characters never before seen on screen.”

Also, Born of Hope is no short film. It’s a 70-minute made-for-the-web feature that tells the story of Aragorn’s parents, Arathorn and Gilraen, along with the characters who sacrificed it all to keep Aragorn safe. Aragorn, of course, was played by Viggo Mortensen in Peter Jackson’s blockbuster trilogy, the last of which, The Lord of the Rings: The Return of the King won the 2003 best picture Oscar.

Born of Hope follows the launch of The Hunt for Gollum, another Lord of the Rings fan film that was first made available in May 2009. 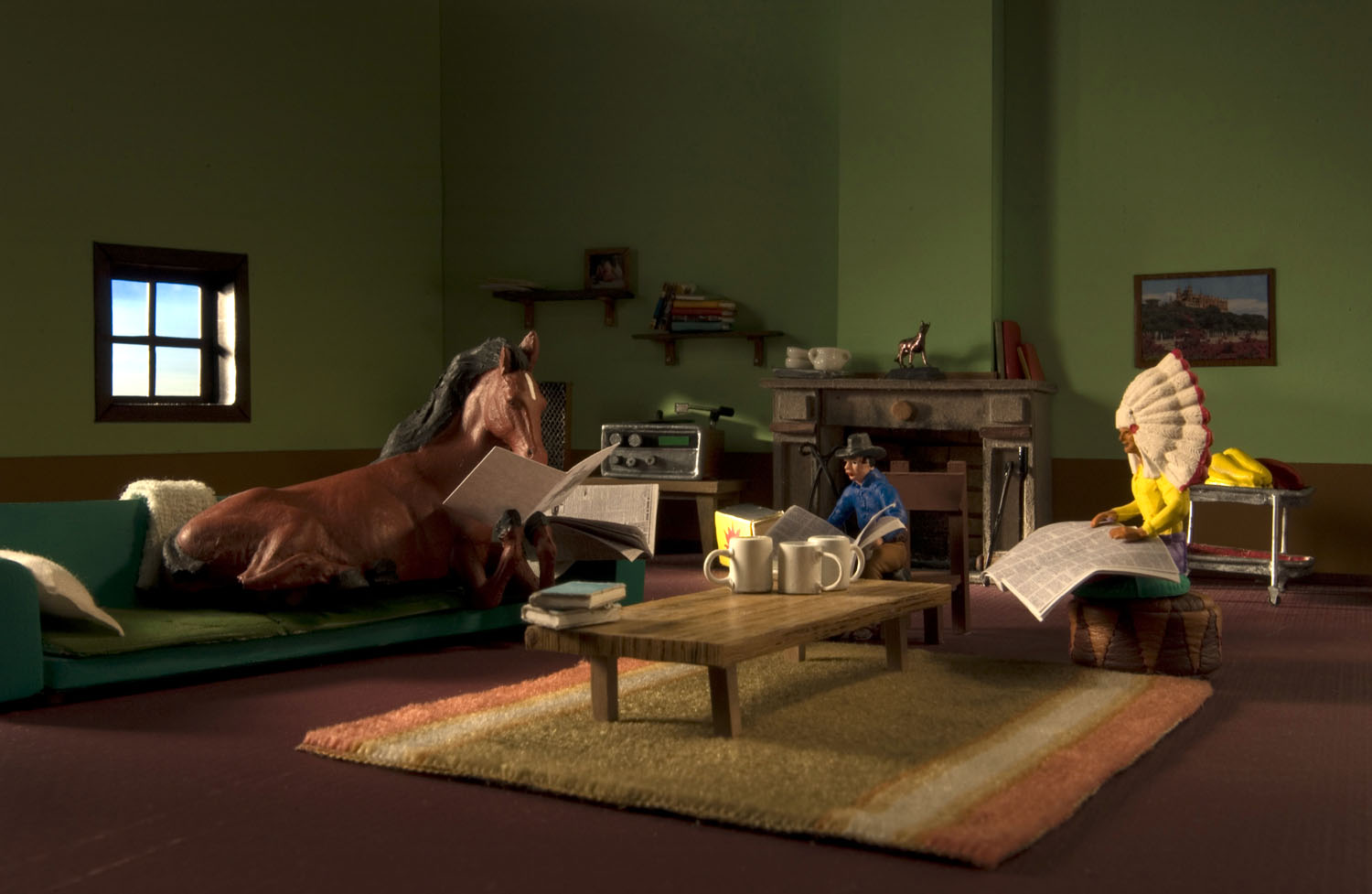 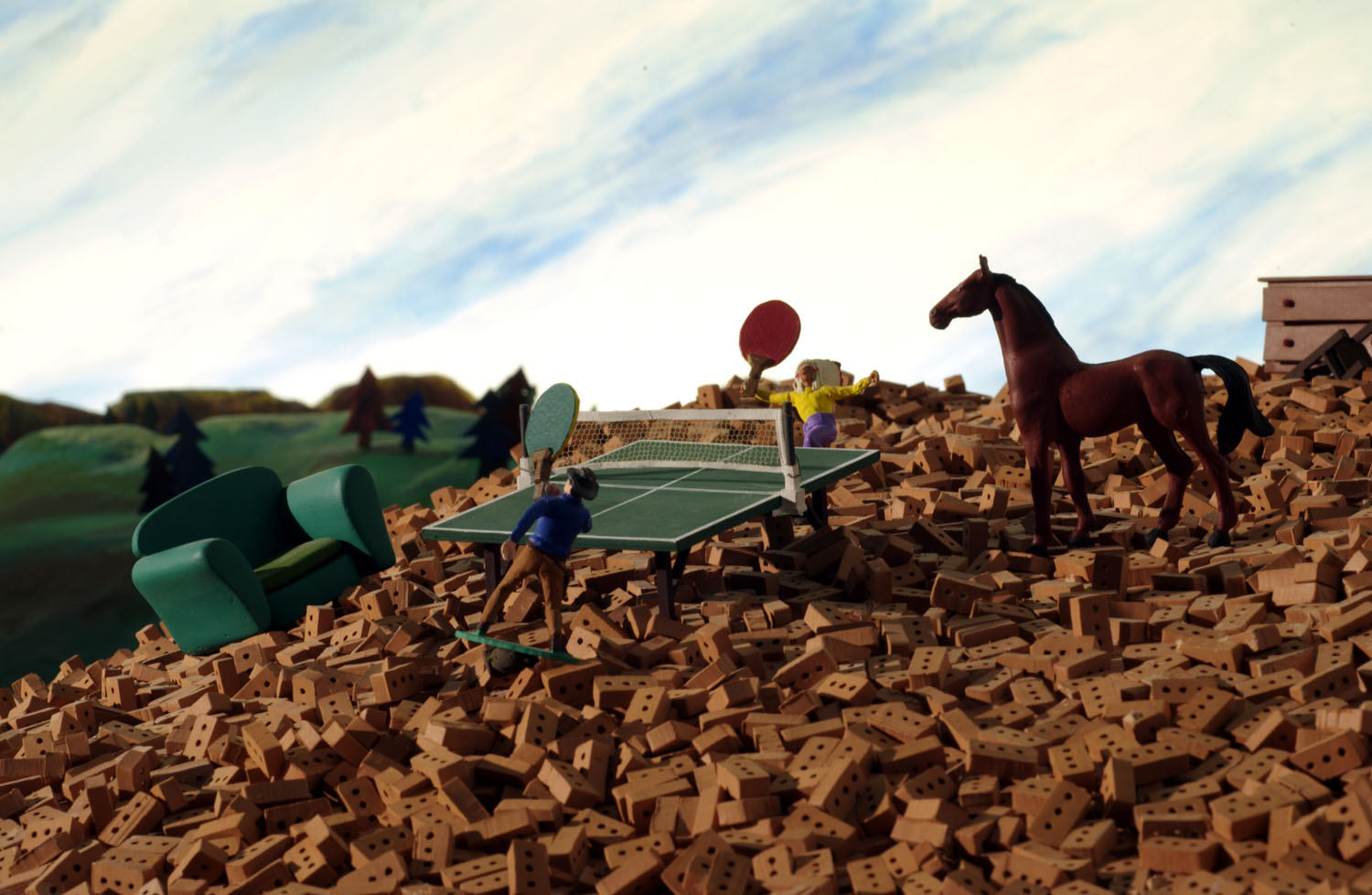 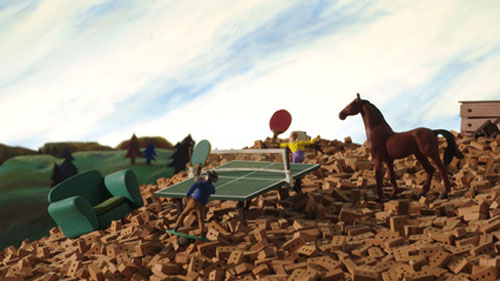 Via Zeitgeist Films, Stéphane Aubier and Vincent Patar’s stop-motion animated feature A Town Called Panic will open in New York City on Dec. 16 (at Film Forum) and in Los Angeles (at the Nuart in West LA) on Jan. 29. Other US markets will follow. (The film will have a Los Angeles Oscar qualifying run in Dec., but the “official” opening date is Jan. 29.)

Based on the Belgian animated cult TV series Panique au village, released by Wallace & Gromit‘s Aardman Studios, the French-language (with English subtitles) A Town Called Panic features three plastic toys – Cowboy (voice by Stéphane Aubier), Indian (voice by Bruce Ellison) and Horse (voice by Vincent Patar) – who live together in a rambling house in a rural town where weird stuff keeps happening all the time. 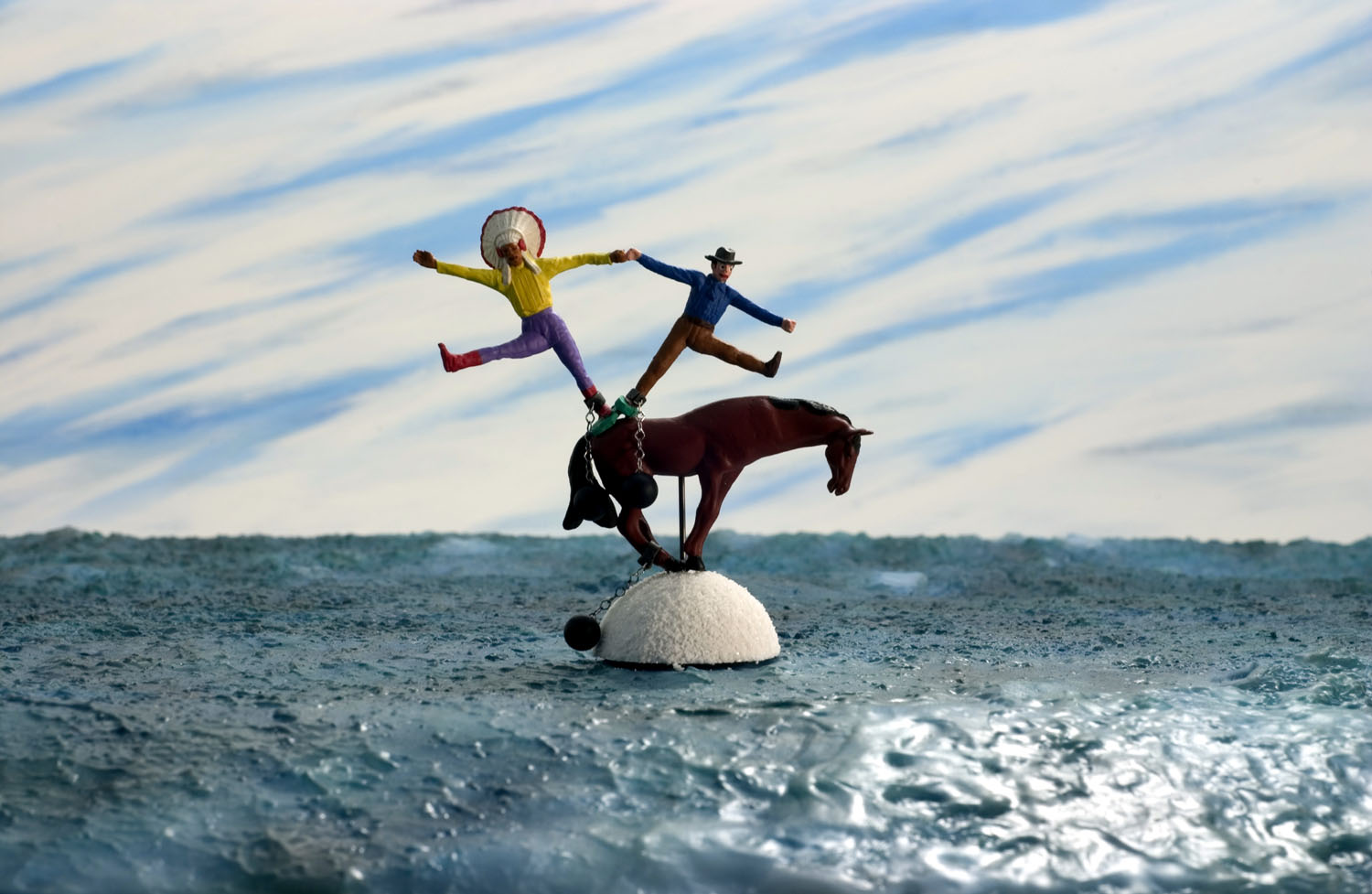 For instance, Cowboy and Indian’s plan to give Horse a homemade barbeque goes up in smoke when they accidentally buy 50 million bricks. This heavy mistake sets off a chain of bizarre events, forcing the trio to travel to the center of the earth, trek across frozen tundra, and discover a parallel underwater universe of scheming, pointy-headed creatures.

But the big question is: will Horse and his paramour – flame-tressed music teacher Madame Longray (voice by Jeanne Balibar) – ever find a quiet moment alone?

Curiously, all characters are both voiced and animated as if they’ve been filled with laughing gas. 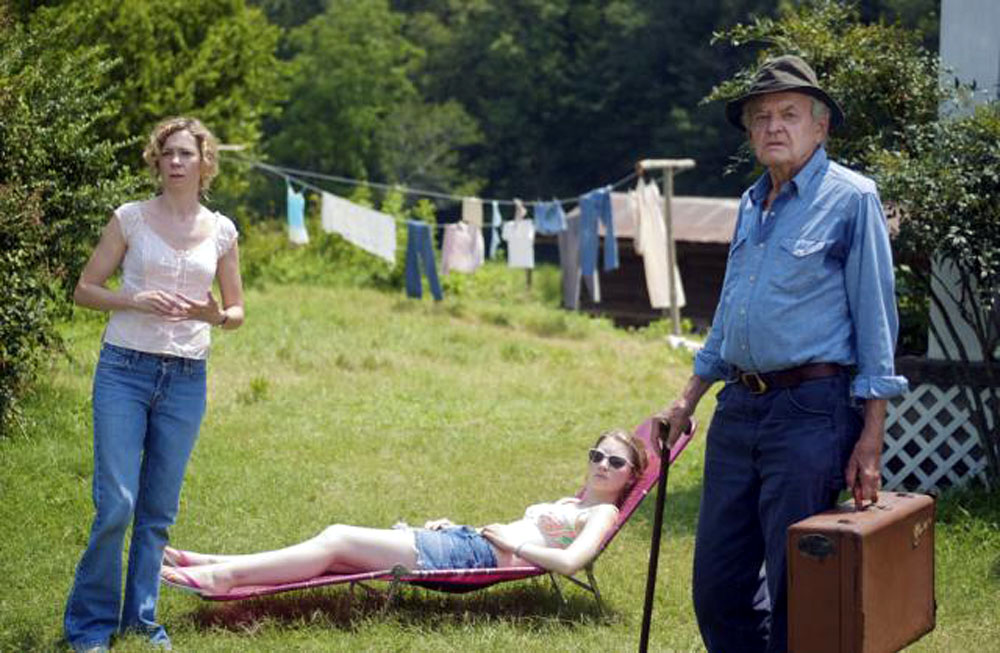 Directed by Scott Teems, who also adapted William Gay’s short story “I Hate to See That Evening Sun Go Down,” That Evening Sun stars Hal Holbrook as Abner Meecham, an elderly Tennessee farmer who, after fleeing from his nursing home, returns to his homestead only to discover that his son (Walton Goggins) has leased the farm to a no-good neighbor (Ray McKinnon).

If the 84-year-old Hal Holbrook is remembered by year-end film critics – and that seems quite likely, considering the notices he’s been getting and the fact that That Evening Sun has just opened – he’ll probably land a Best Actor Oscar nomination come next February. Who knows, he may even pull a Richard Farnsworth and land a Best Actor – Drama Golden Globe nod as well. In early 2008, Holbrook was nominated in the best supporting actor category for his work in Sean Penn’s Into the Wild.

In Los Angeles, That Evening Sun is currently playing at the Royal in West LA and at the Laemmle Town Center 5 in Encino.

Noel Clarke’s Adulthood, which was screened at this year’s Karlovy Vary Film Festival, opens this week on IFC Festival Direct, a distribution outlet presenting “a collection of the best and most innovative cinema” from film festivals around the world, exclusively on demand.

Adulthood is a follow-up to Kidulthood (2005), which Menhaj Huda directed from Clarke’s screenplay about a group of teenagers doing some quick growing up in west London’s seamy streets: Following the release of Sam (played by Clarke himself), who’d been in prison for killing Trife (Aml Ameen in Kidulthood), several of the original film’s characters must confront the consequences of that violent night in their past.

The Academy of Motion Picture Arts and Sciences has announced that Thad Beier, Elizabeth Cohen, Don Hall and Jim Houston have accepted invitations to join the Academy’s Science and Technology Council.

From the Academy’s press release:

Beier, the head of CG at Digital Domain, was awarded an Academy Technical Achievement Award (shared) in 1998 for the design and implementation of the ras_track tracking software, a device which allows the user to determine the position and location of the camera and objects in a scene by tracking points in scanned sequence. Beier has been a member of the Academy’s Visual Effects Branch since 1999.

Founder of Cohen Acoustical Inc. in 1982, Cohen’s work is focused on high-quality media over photonic networks. She has been an associate member of the Academy since 1996.

Hall, a sound editor on more than 90 motion pictures spanning five decades, was the recipient of the Academy’s John A. Bonner Medal of Commendation in 2005 for his outstanding service and dedication in upholding the high standards of the Academy. He currently serves on the Academy’s Board of Governors, representing the Sound Branch; this is his 14th year as a governor. Hall has been a member since 1964.

The film info below is from distributor First Run Features’ website:

“Intent on shaking up the ultimate ‘sacred cow’ for Jews, Israeli director Yoav Shamir embarks on a provocative – and at times irreverent – quest to answer the question, ‘What is anti-Semitism today?’ Does it remain a dangerous and immediate threat? Or is it a scare tactic used by right-wing Zionists to discredit their critics?

“Speaking with an array of people from across the political spectrum (including the head of the Anti-Defamation League and its fiercest critic, author Norman Finkelstein) and traveling to places like Auschwitz (alongside Israeli school kids) and Brooklyn (to explore reports of violence against Jews), Shamir discovers the realities of anti-Semitism today. His findings are shocking, enlightening and – surprisingly – often wryly funny.”

* I was wrong. Surprisingly, Defamation failed to be shortlisted by the Academy’s Documentary Branch.

“It’s a competitive game measuring up national and regional cinemas against each other[,] created and organized by the online community at The Auteurs (Mubi.com). Like the World Cup in soccer, only with movies.

“Background: Kicked off in September with 32 teams, then separated into 8 groups of 4, from which the top 2 in each group have qualified for the last 16. The last 16 match line-ups are here. Each team has had a manager making the selections. In each match 3 films are paired against an opponent. Results are decided by the voting preferences of Auteurs users: to vote you must have seen both films in each pairing. At each stage new films will be selected and some time allowed for viewing before the matches resume.”

The Kids Are All Right Box Office: Lesbian Comedy-Drama Will Not Reach Brokeback Mountain Heights

Modern Times: Charles Chaplin Behind the Scenes + The Lord of the Rings Middle Earth Revisited

I have not seen Gumby art since I was a kid looks neat.