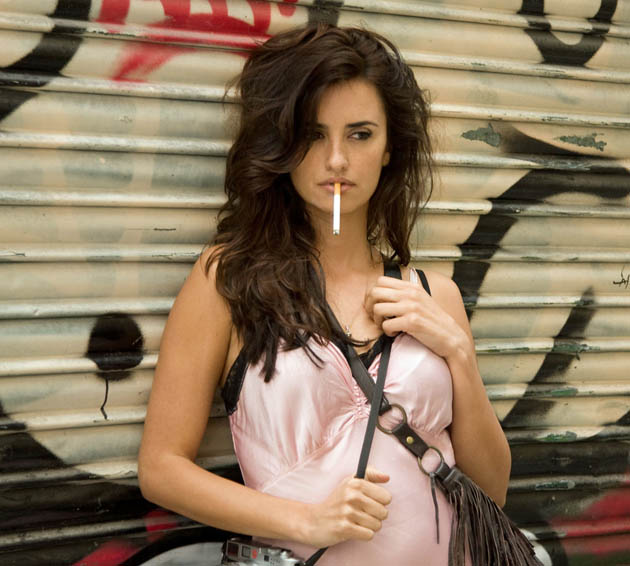 Penélope Cruz, seen above in Woody Allen’s Vicky Cristina Barcelona, will not look like this in Pedro Almodóvar’s next film, Broken Embraces / Los Abrazos rotos, for the director asserts he doesn’t want his leading lady to “repeat those [hairstyles] she has worn in other films.”

“Regarding the English translation of the original title, Los Abrazos rotos, I have seen in some publications that it has been translated as ‘Broken Hugs’ and in others as ‘Broken Embraces.’

I don’t have a sufficient knowledge of English to decide which is correct, or if both are, but I get the impression that in my story the ‘abrazos’ are more embraces than hugs.

“My ‘abrazos’ are not fraternal or friendly but those of a passionate lover. Like the embraces by Jeanne Moreau and Maurice Ronet in the final photos of Elevator to the Gallows or like those which appear at the start of Hiroshima Mon Amour or the definitive embrace by Jennifer Jones and Gregory Peck in Duel in the Sun. Embraces by lovers at the height of their passion, in my case broken, literally torn, by a third person.”

In the stellar cast of Los Abrazos rotos:

Veteran Ángela Molina – one of Fernando Rey’s two embodiments of desire in Luis Buñuel’s That Obscure Object of Desire (the other one is Carole Bouquet).

Los Abrazos rotos, which the sometimes photophobic director (who suffers from severe headaches) says was inspired by “darkness” and by a “mysterious” photograph of a couple on a deserted beach, is scheduled to open in Spain in March 2009. 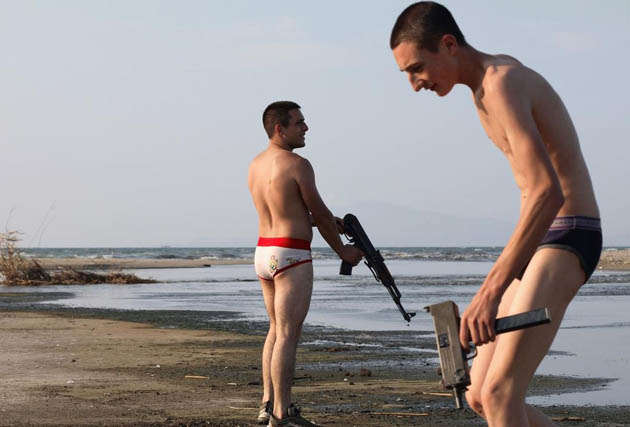 Gomorrah. Matteo Garrone discusses the Camorra, which has threatened the life of one of Gomorrah‘s screenwriters, Roberto Saviano, who also happens to be the author of the book on which the Italian mafia drama is based.

“The idea of bringing the army to fight them is, for me, superficial. It’s good for the image of the Italian government, but it won’t do anything to fix the problem.

“You have to work from the inside, to create a relationship between citizens and the institutions of power. The Camorra is very strong because they live there, they grew up there, they are close to people.

“If you don’t work from the inside it will be very difficult. Bringing the army won’t fix it. It may take a generation because the problems are deep – education, unemployment – many, many reasons.”

The article also mentions journalist/author Roberto Saviano, one of Gomorrah‘s screenwriters and whose fact-based book – in which he attacks the Italian mafia and doesn’t hesitate to name names – is the basis for Garrone’s film.

As a result of his book, Saviano has been under 24-hour police protection in the last couple of years. According to the article, several reports in the Italian media claimed that the Camorra wanted Saviano dead by Christmas. That didn’t happen. 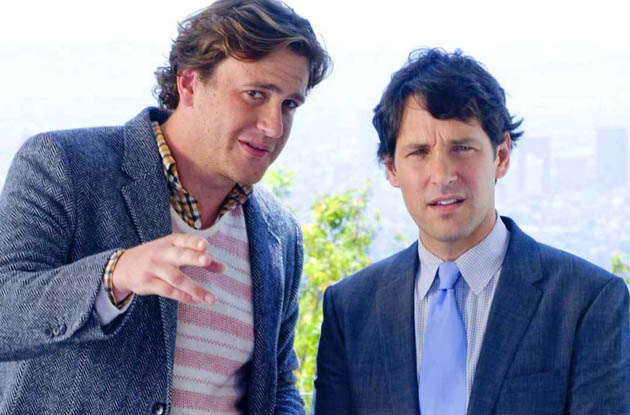 I Love You, Man with Paul Rudd and Jason Segel. The trailer for the latest Paul Rudd comedy aims for the lowest common denominator, as the actor seen nearly a decade ago in The Object of My Affection and The Cider House Rules seems intent on following a career trajectory to please The 40-Year-Old Virgin fans.

More movie news: Written and directed by John Hamburg, whose screenplay credits include Meet the Parents and Meet the Fockers, I Love You Man stars Paul Rudd as Peter Klaven, a guy with no male friends and one big problem: he must find a best man for his wedding.

Happenstance leads Peter to bond with a gross-out type (Jason Segel), which makes things understandably difficult for Peter’s fiancée (Rashida Jones) – especially, one assumes, if the guys aren’t wearing condoms while getting to enjoy each other’s company.

Well, okay, for better or for worse it’s not that sort of bonding. See I Love You Man trailer below.

Paul Rudd and Jason Segel in the I Love You, Man trailer.

You won’t find any condomless man-on-man bonding in the I Love You Man trailer above, but you will find jokes about dog shit and man fart, which should turn I Love You Man into a family-pleasing box office hit come spring 2009.

Hopefully John Hamburg’s comedy will be so successful, but so successful, that it will make Paul Rudd so rich, but so rich, that he’ll finally decide to stop appearing in this sort of material and begin applying his remarkable talents to projects aiming way higher than the moviegoing public’s lowest-of-the-low common denominator.

Really, why can’t Paul Rudd star in a Woody Allen comedy? He’d be perfect in the Scarlett Johansson roles. In fact, he might even make Allen’s comedies funny once again.

And let’s not forget that besides stuff like Knocked Up, The 40-Year-Old Virgin, and Role Models, Paul Rudd movies include Clueless, The Object of My Affection, and The Cider House Rules, none of which could be labeled a masterpiece but all of which sure look like masterpieces when compared to Rudd’s movies of the last decade.

Besides Paul Rudd, Jason Segel, and Rashida Jones, also in the I Love You Man cast: Jaime Pressly, Lou Ferrigno, and Jon Favreau.

The Academy of Motion Picture Arts and Sciences has announced that 281 features are eligible for the 2009 Best Picture Academy Award – and, one assumes, in most other categories.

As per Academy rules, to be eligible “feature films must open in a commercial motion picture theater in Los Angeles County by midnight, December 31, and begin a minimum run of seven consecutive days.”

Also, “a feature-length motion picture must have a running time of more than 40 minutes and must have been exhibited theatrically on 35mm or 70mm film, or in a qualifying digital format.”

And finally, “feature films that receive their first public exhibition or distribution in any manner other than as a theatrical motion picture release are not eligible for Academy Awards in any category.”

This last rule gave Linda Fiorentino some grief in 1994, as she would have been a strong contender for the Best Actress Oscar following her New York Film Critics Circle win for her performance in John Dahl’s neo-noir The Last Seduction. The problem: The Last Seduction had been shown on U.S. cable television before hitting theaters.

An outcry followed in some circles, as Fiorentino-ites protested that times had changed and the Academy should adapt its rules to new filmmaking and film distribution realities. The Academy’s top dogs, however, were adamant. Despite a lawsuit brought by the film’s production companies against the Academy, Linda Fiorentino remained ineligible.

A similar brouhaha – also to no avail – followed the disqualification of Ingmar Bergman’s Scenes from a Marriage and potential Best Actress nominee Liv Ullmann from the 1974 Oscar competition because the film had been shown on Swedish TV the year before.

The 2009 Academy Award nominations will be announced on Thursday, Jan. 22, at 5:30 a.m. Pacific Time at the Academy’s Samuel Goldwyn Theater in Beverly Hills.

The 2009 Academy Awards ceremony will take place on Sunday, Feb. 22, at the Kodak Theatre at Hollywood & Highland Center. In the U.S., it’ll be televised live by ABC.

On Stranger Tides Trailing Previous Pirates of the Caribbean Sequels