Lucy Gordon, a young British actress perhaps best known for a small role in Spider-Man 3, was found dead in her Paris apartment yesterday, May 20. Gordon’s death was an apparent suicide. She is supposed to have hanged herself while her boyfriend, cinematographer Jérôme Alméras, slept. Gordon would have turned 29 tomorrow, May 22.

The Oxford-born Gordon worked as a model before making her feature-film debut in the little-seen Perfume in 2001.

Among her other screen credits are the romantic comedy Serendipity, with John Cusack; The Four Feathers, opposite Heath Ledger; Steve Clark’s dramatic comedy Frost, starring Jason Behr; Russian Dolls, with Romain Duris; and John Krasinski’s Brief Interviews with Hideous Men, which was screened at this year’s Sundance Film Festival. 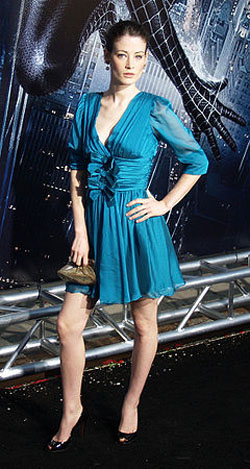 In a press release, Sfar and Serge Gainsbourg producers Marc du Pontavice and Didier Lupfer declared that their film “owes a lot to Lucy Gordon’s generosity, kindness and [her] immense talent.”

Serge Gainsbourg is scheduled to open in France next year.