The city of Paris and iconoclastic writer-director Luis Buñuel are Turner Classic Movies’ themes today and later this evening, Jan. 26. TCM’s focus on Luis Buñuel is particularly welcome, as he remains one of the most daring and most challenging filmmakers since the invention of cinema.

In fact, Luis Buñuel is so remarkable that you won’t find any Hollywood hipster wannabe paying homage to him in his/her movies. Nor will you hear his name mentioned at the Academy Awards – no matter the film Academy in question. And rest assured that most movie critics working today have never even heard of him, let alone seen any of his movies.

In sum, nowadays Luis Buñuel is un-hip, un-cool, and unfashionable. And that’s unquestionable proof of the excellence of his oeuvre.

Clash of which civilizations?

These days everyone is concerned with freedom of expression. “Western values.” The clash of civilizations. The West vs. [fill in the blank].

Well, if only Luis Buñuel had been around to tell you a few stories. Long before Charlie Hebdo was poking infantile, mean-spirited fun at Muslims, Buñuel was poking adult, clever fun at the Catholic Church, capitalism, bourgeois values, and much of the brain-deadening cultural norms that make the world go round and round and round in a vicious circle.

There’s nothing childish about Viridiana (1961), the story of a nun (Mexican star Silvia Pinal) who learns the hard way that the virtue of charity can lead to some unsavory vices. Buñuel wasn’t shot dead for making Viridiana, but he had to stay away from Gen. Francisco Franco’s right-wing Spain, where he became (once again) persona non grata for his attacks on The System.

After all, Gen. Franco may have been a brutal, ruthless, sociopathic dictator, but hey, he was also a man of strong moral values and with close ties to Spain’s Catholic hierarchy. Today’s Family Values crowd would have been totally on his side. And just as surely they would have been disgusted at the Cannes Film Festival jury, which handed the 1961 Palme d’Or to the – in the words of the Vatican’s L’Osservatore Romano – “blasphemous” Viridiana. 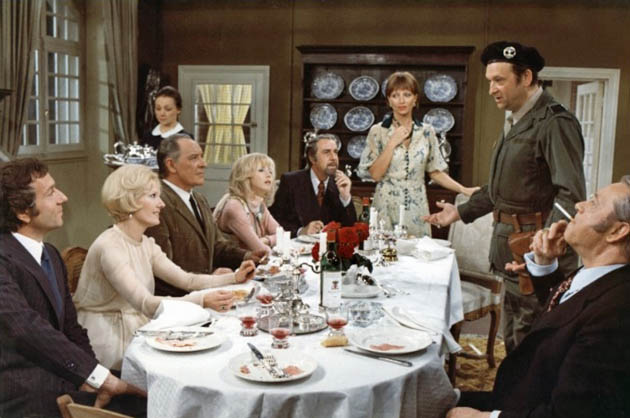 There’s more. In Belle de Jour (1967), Catherine Deneuve is excellent – perhaps her best (or at the very least one of her best) early performance(s) – as a bourgeois housewife by day and kinky sex worker by night. Handsome Jean Sorel is her husband. As for Belle de Jour‘s outstanding production values, special mention should go to Sacha Vierny’s dreamlike color cinematography.

In The Discreet Charm of the Bourgeoisie / Le Charme discret de la bourgeoisie (1972), Stéphane Audran, Delphine Seyrig, Bulle Ogier, Jean-Pierre Cassel (father of Black Swan‘s Vincent Cassel), and Fernando Rey are among a group of haut bourgeois attempting to have a nice, quiet dinner. But little inconveniences always get in the way, from unexpected sexual urges to a terrorist attack.

Of course, it’ll come as a shock to many that long before radical Muslims became infotainment TV fodder, there were non-Muslim terrorist groups of various political, religious, national, and social affiliations.

But really, the most shocking thing about The Discreet Charm of the Bourgeoisie is not what’s on screen. Rather, it’s that this challenging, subversive cinematic work was voted the year’s best non-English language film by the Academy of Motion Picture Arts and Sciences’ traditionally quite timid members – particularly those who vote in the Best Foreign Language Film category.

‘Diary of a Chambermaid,’ ‘The Exterminating Angel’

Diary of a Chambermaid (1964) stars Jeanne Moreau as the ambitious chambermaid Célestine, who works for a – to put it mildly – problematic family living in a French country estate. “Célestine is Buñuel himself,” Moreau once remarked. “The way she watches, critical, humorous. Buñuel has a lot of humor, though it is black humor.”

You can enjoy the black humor in Diary of a Chambermaid and then compare it to what’s found in Jean Renoir’s tamer 1946 version starring Paulette Goddard.

And finally, in The Exterminating Angel (1962) a group of wealthy diners find themselves stuck in a room. But what’s keeping them in there? The doors are wide open. Viridiana‘s Silvia Pinal has one of the leads in this incisive Buñuelesque depiction of social and cultural conditioning.

Among TCM’s Paris-based movies are the following:

Even more surprisingly, Maurice Chevalier comes up with an unusually subtle characterization as Hepburn’s father. Chevalier, of course, had been Lubitsch’s leading man about a quarter of a century earlier, romancing the likes of Jeanette MacDonald, Claudette Colbert, and Miriam Hopkins in the musicals The Love Parade, The Smiling Lieutenant, and The Merry Widow.

And the last word goes to … Luis Buñuel:

I’ve always been impressed by the famous photograph of those ecclesiastical dignitaries standing in front of the Cathedral at Santiago de Compostela in full sacerdotal garb, their arms raised in the Fascist salute toward some officers standing nearby. God and Country are an unbeatable team; they break all records for oppression and bloodshed. 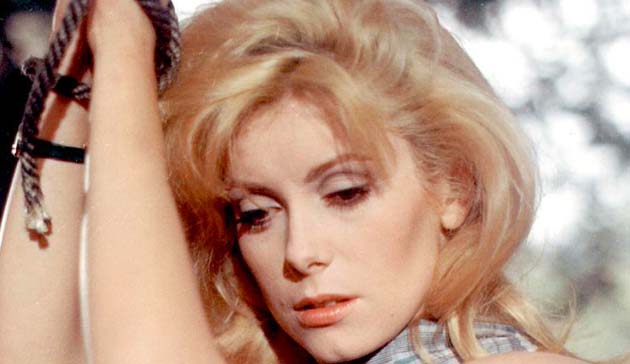 Luis Buñuel quote via My Last Sigh: The Autobiography of Luis Buñuel.