The first two-time and first consecutive Academy Award winner in the acting categories, and, at age 104, the oldest surviving Oscar winner, Luise Rainer – Best Actress for The Great Ziegfeld (1936) and The Good Earth (1937) – died at her London apartment on Dec. 30 – nearly two weeks before her 105th birthday.

Below is a revised version of an article originally posted in January 2014, a few days after Rainer turned 104.

Inevitably, Transformers movie franchise director Michael Bay (who recently had an on-camera “meltdown” after a teleprompter stopped working at the Consumer Electronics Show) and Transformers movie franchise star Shia LaBeouf (who was recently accused of plagiarism) were mentioned – or rather, blasted, in current media parlance – at the 2014 Golden Globes ceremony, held this past Sunday, Jan. 12, at the Beverly Hilton Hotel in Beverly Hills.

Left unmentioned (and unblasted), however, was London resident and two-time Best Actress Oscar winner Luise Rainer – who just happened to turn 104 years old on the day of the Golden Globes telecast.

Of course, likely none of the people attending the Golden Globes had ever heard of – let alone seen a movie featuring – either Luise Rainer or the vast majority of her contemporaries. In fact, you would have been very lucky to find one single guest or nominee able to name one single movie directed by Cecil B. DeMille – in whose honor the Hollywood Foreign Press Association came up with the Cecil B. DeMille Award, which this year went to Woody Allen (by way of Diane Keaton).

You would have been just as lucky to find two people who could have named one single François Truffaut movie – Best Supporting Actress (TV) winner Jacqueline Bisset, the star of Truffaut’s Day for Night, and who else? And no, Steven Spielberg’s Close Encounters of the Third Kind doesn’t count. (I’m mentioning Truffaut because his death of a brain tumor became the punchline of a joke during Diane Keaton’s Woody Allen tribute.)

Admittedly, Luise Rainer didn’t star in many Hollywood movies – nine in all – but three of them were major productions:

Luise Rainer won Best Actress Academy Awards for both The Great Ziegfeld and The Good Earth, thus becoming not only the first performer ever to win two (as it happened, back-to-back) Oscars but also only the second individual to achieve that feat, following producer Walt Disney, whose animated shorts won a series of Academy Awards in the early ’30s. 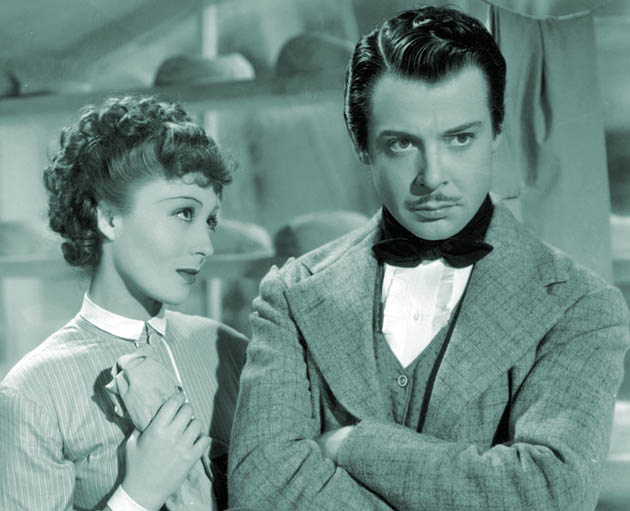 Luise Rainer in ‘The Great Waltz,’ with Fernand Gravey.

Now, back to the 2014 Golden Globes … Surely hosts Tina Fey and Amy Poehler (and/or their writers) – or any of the presenters – could have come up with a good Luise Rainer joke/homage. After all, the Golden Globes are supposed to be a celebration of movies and television, right? Luise Rainer starred in both media. (On TV, she’s awesome as Ramon Novarro’s wife in the 1965 Combat episode “Finest Hour.”)

But for the two-time Oscar winner to be remembered, someone connected to the Golden Globes would have needed to be aware of the following:

d) Hollywood movies made before Jaws – besides The Godfather, Bonnie and Clyde, The Sound of Music, It’s a Wonderful Life, Gone with the Wind, and The Wizard of Oz.

See, if you’re neither “in” nor tabloid fare, you might as well have never existed. Most of this year’s Golden Globe nominees – and some of the winners – will learn that lesson in the years to come.

As found on the IMDb, here’s the full list of Luise Rainer movies.

The first three titles are German and/or Austrian (co-)productions. From 1935-1938, Luise Rainer was an MGM star; Hostages was made at Paramount. 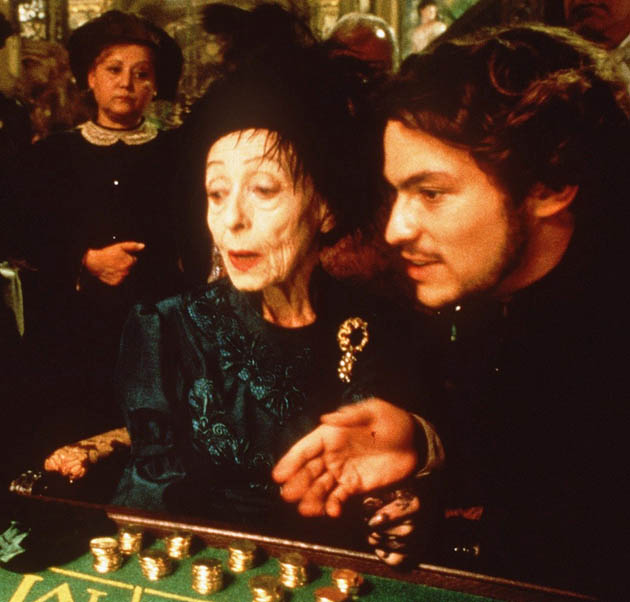 Luise Rainer in ‘The Gambler.’

And while their names mean anything … check out the full list of “Golden Globes 2014 Winners.” Among them:

[1] There’s some question whether Luise Rainer actually has a role in Madame hat Besuch, as there’s precious little information online about this Carl Boese effort – apparently a short and supposedly a “lost” one. I found it mentioned in three books online, two of which make reference to its censorship certificate.

Here are the book titles:

Additionally, the German Film Institute website features the German censorship certificate (dated Oct. 22, 1932) banning the Madame hat Besuch poster/advertising from German territory, but little else about the film itself. (The poster, featuring a woman in a ball gown and two laughing men standing next to her as she hands an unfastened pearl necklace to one of them, was deemed offensive because of the depiction of a pistol pointed at the woman.)

Also, the IMDb lists Luise Rainer in the cast of Erik Ode’s 1954 comedy Der erste Kuß (“The First Kiss”), but I couldn’t find confirmation that she indeed has a role in the film.

Der erste Kuß is discussed in other publications as well, but I could find no mention of Luise Rainer in connection with it.

And finally, according to several websites Ja, der Himmel über Wien (“Yes, the Sky over Vienna,” 1930) is supposed to have been a 1930 short featuring Luise Rainer’s first film appearance. Although that’s possible, “Ja, der Himmel über Wien” – the name of a popular song by Richard Fall – is an alternate title for Sehnsucht 202.

[2] A Hollywood remake of Willi Forst’s German hit Masquerade in Vienna / Maskerade (1934) starring Paula Wessely and Anton Walbrook, Escapade is not lost, but has been unavailable for years. (There were at least two screenings, both in California, in the 1990s.)

According to one unverified source, Time Warner does not have a viewable print of the film. However, luiserainer.net states that the film’s unavailability is due to rights issues.