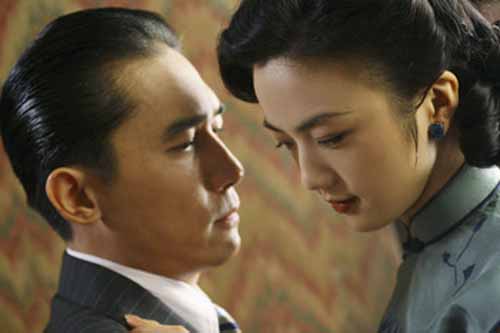 Lee, whose Brokeback Mountain won the Golden Lion in 2005, remarked that his accepting the award “in the shadow of the passing of two great giants, Michelangelo Antonioni and Ingmar Bergman, I realize how huge this festival has become.”

Lee dedicated his Golden Lion to Bergman, whom he saw while working on Lust, Caution. “Ingmar hugged me the way a mother hugs a child,” the Taiwanese director said. “This hug was not for me, it was for you, the keepers of cinema.” Bergman died on July 30, and Antonioni the following day.

In Lust, Caution, members of a Chinese resistance group hatch a plan to murder a high-ranking Chinese official in cahoots with Japanese occupiers in the Shanghai of the early 1940s. Things get a little complicated when a resistance spy (newcomer Tang Wei) falls in love with her target (Tony Leung). (Things got even more complicated when China announced that the film’s – supposedly – sexually explicit scenes will be cut for release in that country.)

Rodrigo Prieto, who had previously collaborated with Lee in Brokeback Mountain, was given an Osella for best cinematography.

Though Lust, Caution is spoken mostly in Mandarin and other Chinese dialects – in fact, it is the second consecutive Mandarin-language film to win at Venice, following last year’s Still Life – English was the language spoken by most of the 2007 Venice winners.

Festival president Marco Mueller made sure that lots of British and American films were included in the Golden Lion competition roster, and even though several British films received raves from critics, U.S. productions dominated the list of winners.

Despite reservations from some critics, Brian De Palma was voted best director for Redacted, the sort of film that gives American right-wingers both stomach convulsions and anti-Hollywood ammunition, but that fares well with those who want to make an anti-war/anti-militarism – and perhaps also an anti-nativism – statement.

Redacted is based on the March 2006 rape and murder of a 14-year-old schoolgirl by US servicemen, who then proceeded to slaughter her family. It is also the director’s reaction to the sanitized media depiction of the Iraq war in the United States. Nearly twenty years ago, De Palma covered similar ground in his 1989 war drama Casualties of War, which depicts the gang rape and murder of a young girl during the Vietnam War.

Cate Blanchett (right) and Brad Pitt won the Volpi Cup for best actress and actor in, respectively, Todd Haynes’ I’m Not There and The Assassination of Jesse James by the Coward Robert Ford. In Haynes’ bizarre biopic of Bob Dylan, Blanchett is one of the half-dozen or so performers incarnating the American folk singer, while in Andrew Dominik’s The Assassination of Jesse James, Pitt plays the assassinee. (Casey Affleck is the coward.)

Neither Blanchett nor Pitt were on hand to accept their awards.

Additionally, I’m Not There shared the Special Jury Prize (or runner-up for best film prize) with Abdel Kechiche’s The Grain of Life, about a North African immigrant trying to make ends meet in a French fishing village. Kechiche’s film had been tipped as the favorite to win the Golden Lion, as the two-and-a-half-hour drama had been greeted by rave reviews. One of the film’s leads, actress Hafsia Herzi, was given the Marcello Mastroianni Award for best new performer.

Among the other winners were veteran Italian director Bernardo Bertolucci, 67, who was given a standing ovation lasting more than 10 minutes, and Russian director Nikita Mikhalkov, 62, both of whom received special Lions for their body of work.

Mikhalkov was represented at this year’s festival with 12, a remake of Sidney Lumet’s 1957 courtroom drama 12 Angry Men. In the new version, prejudice and bigotry rule when a Russian jury is asked to convict a Chechen youth for the murder of his stepfather. The film failed to win any awards.

Earlier in the week, American director Tim Burton, 49, had been another special award honoree.

COPPA VOLPI for Best Actor: Brad PITT in the film THE ASSASSINATION OF JESSE JAMES BY THE COWARD ROBERT FORD by Andrew DOMINIK (USA)

COPPA VOLPI for Best Actress: Cate BLANCHETT in the film: I’M NOT THERE by Todd HAYNES (USA)

SPECIAL LION for Overall Work: NIKITA MIKHALKOV
The Jury is delighted to acknowledge the consistent brilliance of Nikita Mikhalkov’s body of work. His new film is once again a confirmation of his mastery in exploring and revealing to us, with great humanity and emotion, the complexity of existence.

SIGNIS Award: In the Valley of Elah by Paul Haggis

Queer Lion Award: The Speed of Life by Ed Radtke

Best Film in Competition: I’m not There by Todd Haynes

“The circle is not round. Cinema for peace and the richness of diversity” Award: La Zona by Rodrigo Plà

Mimmo Rotella Foundation Award For a film which shows a firm connection with the arts: Nightwatching by Peter Greenaway

The City of Venice Award: Unni (India) by Murali Nair

Sept. 7: Based on a semi-autobiographical short story by Eileen Chang, the two-and-half-hour Se, jie / Lust, Caution, Ang Lee’s first Chinese-language film since the 2000 martial-arts epic Crouching Tiger Hidden Dragon, stars Tony Leung as a powerful politician who is seduced by a young woman (newcomer Tang Wei) involved with a group of revolutionary students. The politician is a collaborator, assisting the Japanese occupiers in 1940s Shanghai.

Needless to say, Lust, Caution‘s politics and psychology have been all but ignored in favor of discussions about the (apparently quite explicit) sex scenes. Are they real? Is it all cgi? Do people actually do such things in real life?

The ratings board members at the Motion Picture Association of America apparently don’t, as they gave Lust, Caution a NC-17 rating. There goes the teenage market for the film. (Theoretically, that is.) If only Ang Lee had shown the two leads vomiting on one another, or perhaps chopping off each other’s heads; his film would then have received the more lenient R rating.

At least for the time being, the Taiwanese government isn’t too preoccupied with the kinky sex in Lust, Caution. Taiwan has complained that Lee’s film has been referred to in some quarters as a production from “Taiwan, China,” reportedly as a result of pressure from Beijing.

Lust, Caution is one of the features in competition for this year’s Golden Lion. Lee won the award in 2005 for another controversial drama dealing with human sexuality, Brokeback Mountain.

Personally, I just hope that Lust, Caution won’t be one more moralizing tale about the dangers of a very natural human instinct.

Addendum: Variety‘s review has Lust, Caution as a “Hong Kong-U.S.-China” production. In the magazine, Derek Elley complains that “too much caution and too little lust squeeze much of the dramatic juice out of” the film.

Andrew DOMINIK The Assassination of Jesse James by the Coward Robert Ford – USA, 155

The winners at the 61st Edinburgh Film Festival were announced on Aug. 25.

Sam Riley stars as rocker Ian Curtis in Anton Corbijns Control. “Its fabulous. Its my first movie so I had no expectations for the film,” Corbijn remarked upon accepting the best film award from Stephen Frears and Kate Dickie. “I did all these things that people said I shouldnt be doing. Shooting in black and white, having an unknown as the main character, putting my own money in. Most of these things are what people say are great.” In addition to its Edinburgh win, earlier this year Control received a special mention at the Cannes Film Festival’s Golden Camera sidebar.

Standard Life Audience Award: We Are Together, directed by Paul Taylor

Special mention: How to Save a Fish From Drowning, by Kelly Neal

McLaren Award for New British Animation in Partnership with BBC Film Network: Over the Hill, by Peter Baynton

In Ozer Kizitans A Mans Fear of God, a devout Turkish Muslim discovers that religious dogma can be bad for your (mental) health and that religious hypocrisy is all around.

The EDN Talent Grant
The EDN Talent Grant was established through the cooperation of the Sarajevo Film Festival (SFF) and the European Documentary Network (EDN), and is aimed at providing support to talented directors of documentary films from the Balkans.
In 4 Years, directed by Neboja Slijepcevic

The CICAE Award
The International Confederation of Artistic Cinemas (CICAE) award to a film in the Competition Programme. The chosen film will receive special CICAE support in its distribution, screening, and the reaching of an audience through a network of 3000 cinemas.
Mans Fear of God, directed by Ozer Kiziltan

The Cave of the Silken Web: Chinese Cinema Landmark