Made in USA + 2 or 3 Things I Know About Her: Jean-Luc Godard Movies

When the young cinephiles who would later spawn the French New Wave attended screenings of Hollywood films at the Cinémathèque Française (website), they often found themselves watching prints lacking French subtitles.  Not all of these men understood English, but they stuck it out anyway.  After all, you can still learn from a film even if you can’t quite follow the dialogue; one could even make a case that disregarding the plot allows you to really pay attention to what’s on screen.

I’m not certain that that story isn’t apocryphal – and in any case, I have no idea whether Jean-Luc Godard speaks English or not – but it came to mind more than once as I watched Godard’s Made in U.S.A. (1966) and 2 ou 3 choses que je sais d’elle / 2 or 3 Things I Know About Her (alternate spelling: Two or Three Things I Know About Her, 1967), both of which are making their North American home video debut thanks to the fine people at Criterion.

Right after the opening credits of Made in U.S.A. is a title card: “To Sam and Nick [Samuel Fuller and Nicholas Ray], who raised me to love sound and image.”  Godard is famous for frustrating the habits and instincts that the audience has developed over a lifetime of watching (Hollywood) films, and it’s nice to be reminded that what’s at the root of his own cinephilia is not genre conventions or star iconography (though his films up to this point certainly showed an educated appreciation for these), but the love of “sound and image.”  Before they are anything else – genre deconstruction, or political critique, or “essay,” or what have you – these two movies are his attempts to express that love, show it to the world, and pass it on. 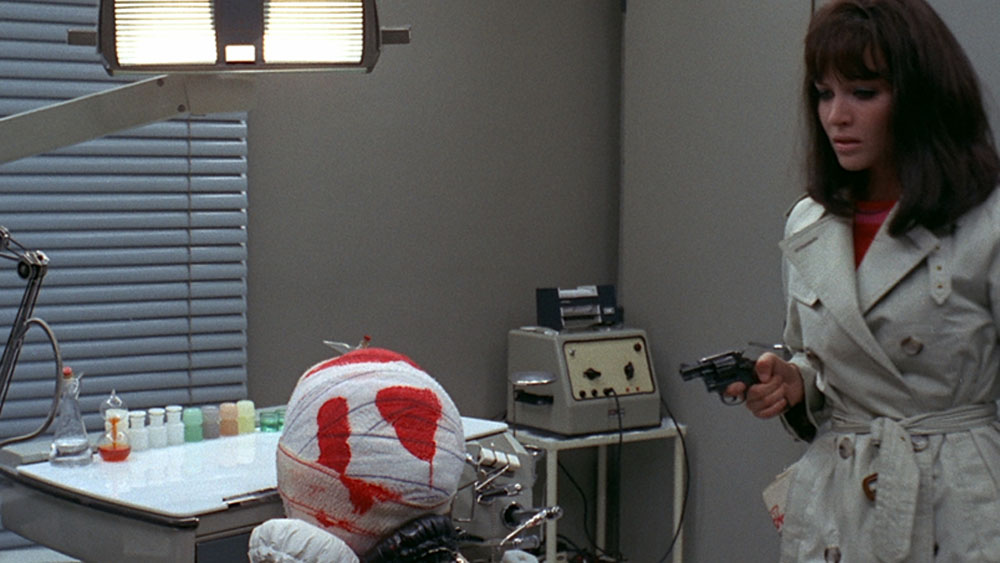 Made in U.S.A. follows Paula Nelson (Anna Karina) as she investigates the death of an old flame in Atlantic City, a fantasyland of American detective film clichés.  Along the way, this seemingly simple narrative is broken up by nondiagetic sound, spontaneous philosophical discussions, musical cues that don’t cue anything, and Godard’s dense thicket of allusions to Hollywood, American crime fiction, and the contemporary French left-wing scene.

Made in U.S.A. balances on the knife’s edge between satisfying genre spoof and often-confusing political tract, but something about it entices rather than alienates: perhaps it’s the challenge of Godard’s poetic structure, Raoul Coutard’s astonishingly vivid cinematography (reproduced to brilliant effect by Criterion), or the presence of Anna Karina, in her last performance for ex-husband Godard. Here, in fact, Karina tops even her legendary turns in Vivre sa vie and Une femme est une femme.

Four decades removed from its context in the tumult of the ’60s, it’s not always easy to figure out what Made in U.S.A. is getting at (at least not initially). But, as a viewing experience, it presents a challenge that few will turn away from. 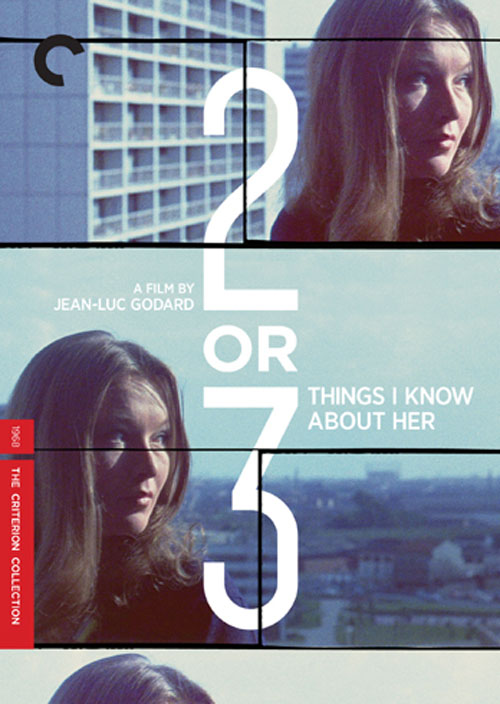 2 or 3 Things I Know About Her, meanwhile, is more straightforward, but somewhat less satisfying for it. The film isn’t a narrative so much as a series of vignettes illustrating the life of “her” (Marina Vlady), who divides her time between housewifery and prostitution, with the ‘action’ periodically broken up by static shots of an under-construction suburban housing project.

Godard rasps political and philosophical musings over these, which reminded me of nothing so much as Malcolm McLaren in The Great Rock ‘n’ Roll Swindle. Yet, despite my description, 2 or 3 Things I Know About Her is never boring, particularly since Godard hasn’t discarded his sense of humor by this point in his career, e.g., a pimp’s attempts to pacify a distraught toddler was a comic high point for me, and there are many others to choose from.

Although 2 or 3 Things I Know About Her may not be as exciting as its predecessor, it’s every bit as essential.

Made in U.S.A. features new interviews with Anna Karina and (a surprisingly emotional) László Szabó, who plays a character named Richard Widmark in the film); a useful concordance of the various references in the film – a great deal of help if, like me, you don’t know much about the French political situation at that time; the very funny theatrical trailer; and a short documentary on Made in U.S.A. and 2 or 3 Things I Know About Her by Richard Brody and Colin MacCabe, both of whom have recently produced well-done Godard biographies.

2 or 3 Things I Know About Her adds a number of interesting interviews: one with Antoine Bourseiller, a theater director and friend of Godard’s, and two fascinating archival interviews with Marina Vlady and Godard, filmed during production of the film.  As with Made in U.S.A., the theatrical trailer is included, as is another concordance. Scholar Adrian Martin supplies the audio commentary.

‘Made in U.S.A.’ is tough (as tough as Anna Karina’s onscreen investigator) to crack, though it is very engaging for a viewer to attempt to do so. The film seems virtually incoherent, though if one takes a good look at ‘The Big Sleep’, a film it very much mimics, that earlier work does not make much narrative sense, either. So, throwing logic out and interacting with the cinematic possibilities of Godard’s Disney-cartoon-starring-Bogart is a rewarding approach.

‘2 or 3 Things I Know About Her’ is the better film, imo (though not as much fun), and a nice segue into Godard’s dense political phase. It is a lovely film visually as noted (and bravo for noting Godard’s humor), which is in contrast to some of the frustrations Godard expresses (with women, with the ‘new city’, etc.). Marina Vlady is, imo, pretty brilliant in the lead in an unassuming manner.