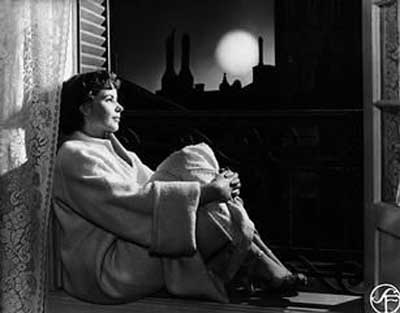 Maj-Britt Nilsson, best known for her roles in three Ingmar Bergman films of the early 1950s, died last Dec. 19 in Cannes. She was 82.

Nilsson’s three Bergman films are Till glädje / To Joy (1950), in which she has the role of an orchestra player whose husband (Stig Olin) strays; Sommarlek / Summer Interlude (right), as a ballerina reminiscing about a passionate but ultimately tragic summer; and Kvinnors väntan/ Secrets of Women / Waiting Women (1952, above), as one of four sisters-in-law (Anita Björk, Eva Dahlbeck, and Aino Taube are the others) discussing their marriages while waiting for their respective husbands to arrive at a summer cottage.

Bergman never used Nilsson in his later films, though the director clearly appreciated her atypically dark (for Scandinavia) physical type. Harriet Andersson, who appeared in a number of the director’s films beginning in the 1950s, bears more than a passing resemblance to Nilsson.

Born in Stockholm on Dec. 11, 1924, Maj-Britt Nilsson was trained at that city’s Royal Dramatic Theater, then under the direction of Mimi Pollack. Her breakthrough came in 1948, when she and Anita Björk starred in a stage production of Jean Genet’s The Maids.

According to the IMDb, Nilsson began her film career in 1941, playing a schoolgirl in the Viveca Lindfors vehicle Tänk, om jag gifter mig med prästen / If I Married the Pastor. (As per the website Ingmar Bergman Face to Face, Nilsson’s first film was Alf Sjöberg’s 1945 release Resan bort.) By the late 1940s, she was starring in films such as Gösta Folke’s drama Maria (1947) and Gösta Werner’s Gatan / The Street (1949).

Following the Bergman films, Nilsson continued working in mostly Swedish productions throughout the 1950s and early 1960s, including Alf Sjöberg’s Vildfåglar / Wild Birds (1955), Arne Mattsson’s Flickan i frack / Girl in Tails (1956), and A Matter of Morals (1961) for Hollywood veteran John Cromwell. She made two brief comebacks in the 1970s, the second of which, the 1977 Swedish-made Bluff Stop, turned out to be her last film.

A 1945 marriage to singer and composer Anders Börje ended in divorce four years later. In 1951, she married theater director Per Gerhard (b. 1924), and shortly thereafter left the Royal Dramatic Theater to work with him at Stockholm’s Vasa Theater. The couple would stay there for the next three decades. One of her stage roles was that of Maggie the Cat in a Swedish-language version of Tennessee Williams’ Cat on a Hot Tin Roof.

Nilsson and Gerhard, who survives her, settled in the French Riviera in the mid-1980s.

Speaking of his work with Nilsson, Ingmar Bergman said, “she could do anything. She did it instantly and delivered her lines with absolute naturalness.”

Rex Harrison Movies: My Fair Lady + Anna and the King of Siam

Thank you Andre,
I love the photo dearly.