Screenwriter Malvin Wald, who received an Academy Award nomination for The Naked City, Jules Dassin’s 1948 mix of neo-realism, film noir, and crime melodrama, died at age 90 on March 6 in the Los Angeles suburb of Sherman Oaks.

The Brooklyn native (born on Aug. 8, 1917) wrote several feature-film screenplays and adaptations, most notably helping to transfer (with Oscar Saul) James Warwick’s play Blind Alley to the screen – it eventually became Rudolph Maté’s film noir The Dark Past (1949), starring William Holden and Nina Foch – and co-writing (with Collier Young and Ida Lupino) the scenario for actress-turned-director Lupino’s Outrage (1950), a (for the time) daring melodrama in which Mala Powers plays a rape victim. 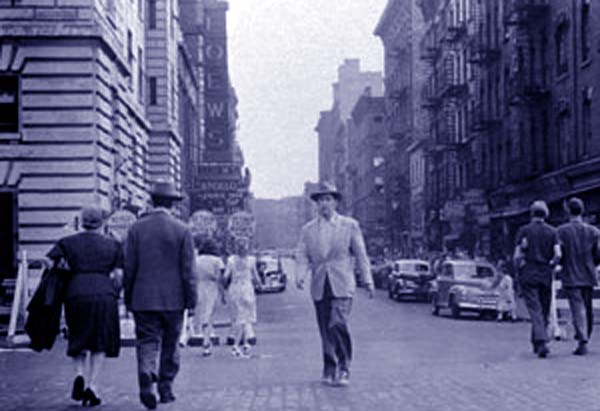 Malvin Wald was responsible for the story for The Naked City (his Oscar nod was in the “Best Writing, Motion Picture Story” category), in addition to co-writing the film’s screenplay with Albert Maltz, one of the Hollywood Ten. Director Jules Dassin himself would also be blacklisted, leaving Hollywood for Europe.

“No one had done a film where the real hero was a hardworking police detective, like the ones I knew in Brooklyn,” Wald told The Hollywood Reporter last year, when The Naked City was one of the films the Library of Congress added to the National Film Registry. Oscar winner Barry Fitzgerald (Going My Way) plays the hard-working detective in question.

From the early 1950s until the late 1970s, Malvin Wald worked chiefly on television, writing for shows such as Jungle Jim, Peter Gunn, Daktari, Perry Mason, and The Life and Times of Grizzly Adams. His last screenwriting credit listed on the IMDb is for Henning Schellerup’s TV movie The Legend of Sleepy Hollow (1980), starring Jeff Goldblum as Ichabod Crane. Curiously, Wald was not associated with the popular Naked City TV series.

Can’t say I’m crazy about “The Naked City,” but it certainly is an important motion picture.

Sorry to report that I can’t say I’m crazy about Barry Fitzgerald, either — though he was fine in “Going My Way.”