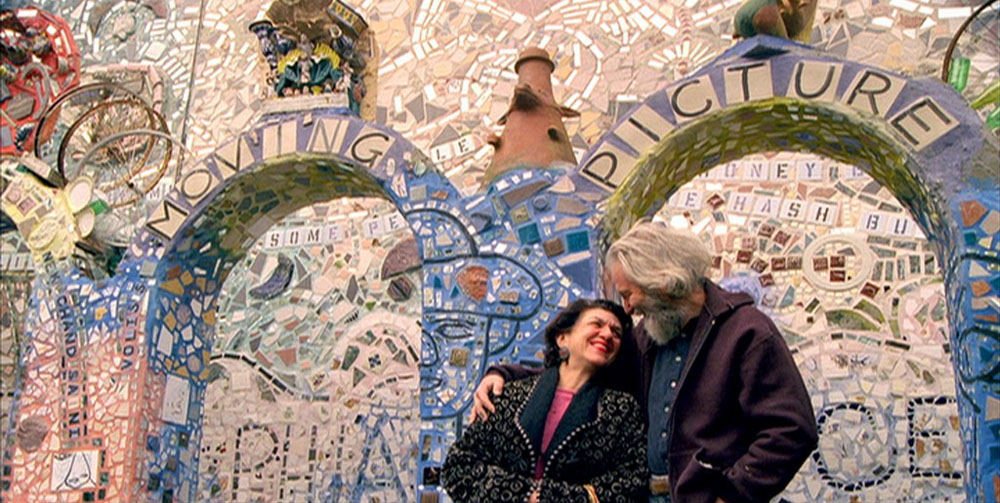 Isaiah and Julia Zagar in Jeremiah Zagar’s In a Dream.

James Marsh’s Man on Wire and Jeremiah Zagar’s In a Dream will launch the Academy of Motion Picture Arts and Sciences’ 28th annual “Contemporary Documentaries” screening series on Wednesday, Sept. 30, at 7 p.m. at the Linwood Dunn Theater in Hollywood. Admission to all screenings in the series is free.

Man on Wire tells the story of Philippe Petit, who in 1974 walked on a wire illegally rigged between the twin towers of New York City’s World Trade Center – a feat that became known as “the artistic crime of the century.” Directed by Marsh and produced by Simon Chinn, Man on Wire won the 2008 Academy Award for Documentary Feature, in addition to a whole spate of film critics’ awards in the United States.

In a Dream portrays the work of artist Isaiah Zagar, who in the last four decades has covered Philadelphia with mosaic murals. Additionally, Jeremiah Zagar’s documentary depicts his father Isaiah’s difficult relationship with his wife, Julia. In a Dream was produced by Jeremy Yaches.

The 28th annual “Contemporary Documentaries” series is a showcase for feature-length and short documentaries drawn from the 2008 Academy Award nominations, including the winners, as well as other “important and innovative films” considered by the Academy that year.

Part One of this two-part series runs through December 2009. The screening schedule is as follows:

In a Dream
Directed by Jeremiah Zagar
Produced by Jeremy Yaches

Encounters at the End of the World
Directed by Werner Herzog
Produced by Henry Kaiser
Academy Award nominee: Documentary Feature

Blessed Is the Match: The Life and Death of Hannah Senesh
Directed by Roberta Grossman
Produced by Grossman, Lisa Thomas

Pray the Devil Back to Hell
Directed by Gini Reticker
Produced by Abigail E. Disney

All films will screen at the Linwood Dunn Theater at the Academy’s Pickford Center for Motion Picture Study on Wednesdays at 7 p.m., except for the IMAX presentations on December 9. Filmmakers will be present at screenings whenever possible. Doors open at 6 p.m. All seating is unreserved.

The Linwood Dunn Theater is located at 1313 Vine Street in Hollywood. Free parking is available through the entrance on Homewood Avenue (one block north of Fountain Avenue). For more information, call (310) 247-3600 or visit the Academy’s website.