Prolific actor Marc Lawrence, among whose credits include Key Largo, Helen of Troy, and Marathon Man, died on Nov. 27 in the desert town of Palm Springs, California, about 160 km east of Los Angeles. Lawrence was 95.

The Brooklyn-born (on Feb. 17, 1910, as Max Goldsmith), rough-looking performer, who once described himself as “pock-marked and oily-skinned,” appeared in more than 170 films from the early 1930s to the beginning of the 21st century, generally cast as vicious outlaws.

Having begun his acting career with Eva Le Gallienne’s repertory company, in 1932 Lawrence moved to Los Angeles, where he landed numerous bit parts in Hollywood movies. Four years later, he became a contract player for $150 a week at Harry Cohn’s Columbia Pictures.

Among Marc Lawrence’s dozens of – mostly brief – movie appearances during that period are:

Away from the big screen, in 1939 Lawrence earned good notices for his stage portrayal of a gay gangster in Clifford Odets’ boxing melodrama Golden Boy. Joseph Calleia was cast in the role in Columbia’s film version.

Marc Lawrence’s notable films of the 1940s include two directed by Henry Hathaway: the crime drama Johnny Apollo (1940), starring Tyrone Power and Dorothy Lamour; and, with Lawrence cast as a mountaineer, the romantic drama The Shepherd of the Hills (1941), starring John Wayne and Betty Field. 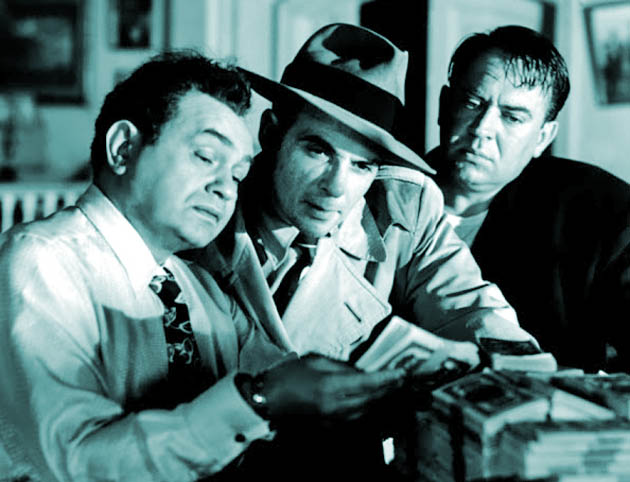 Marc Lawrence’s Hollywood career came to an abrupt halt in 1951, when he was subpoenaed by the House Un-American Activities Committee (HUAC) – possibly after being named by frequent John Ford performer Ward Bond – while filming the Bob Hope-Hedy Lamarr comedy My Favorite Spy.

Hayden managed to stay afloat after naming names himself, but both Revere and Parks had their movie careers ruined. Yet despite his cooperation, Lawrence was blacklisted in Hollywood all the same.

“Being a guy who played nasty guys, I became a symbol of a nasty guy,” Lawrence would later say. “Making that appearance before the committee was death.” Referring to those years, Lawrence recently admitted to the Chicago Tribune, “It bothers me, of course … I spoke against my own conscience.”

As a political refugee in Italy, Marc Lawrence acted in numerous films, mostly B pictures, but sometimes in more prestigious productions such as:

During his lengthy European sojourn, he also appeared onstage, notably as the longshoreman Eddie Carbone in a 1959 Liverpool production of Arthur Miller’s A View from the Bridge.

Return to the U.S.

Following his return to the United States in the late 1950s, Marc Lawrence began working more often on television, guesting in series such as Playhouse 90, The Untouchables, and Peter Gunn. From then on, he was to be kept busy on TV, being seen as recently as the late 1990s in the sci-fi/adventure series Star Trek: Deep Space Nine and the TV movie Gotti (1996).

His film career, however, failed to pick up steam. He returned to Europe for more B thrillers and Westerns, and in 1965 co-directed with another actor-turned-director, John Derek, Nightmare in the Sun (1965), a crime melodrama starring Derek and wife Ursula Andress.

His book of memoirs, Long Time No See: Confessions of a Hollywood Gangster, was published in 1991.

Pirates of the Caribbean: The Curse of the Black Pearl: Nimble Depp