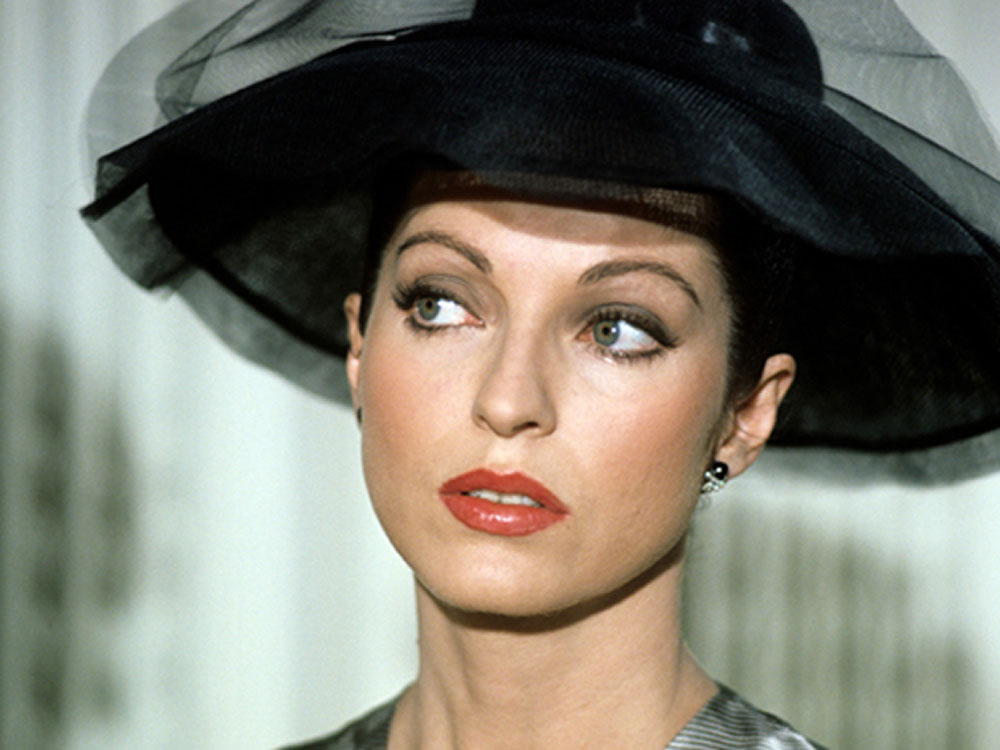 Marie-France Pisier in The Other Side of Midnight (top); Pisier with Jean-Pierre Léaud in François Truffaut’s Love at Twenty segment “Antoine and Colette” (bottom)

Marie-France Pisier, best-known internationally as one of François Truffaut’s New Wave muses and as the star of the trashy Hollywood melodrama The Other Side of Midnight, was found dead early morning on Easter Sunday, April 24, in the swimming pool of her home in Saint-Cyr-sur-Mer in the South of France. Her death apparently occurred late Saturday night or very early Sunday. Pisier was 66.

Her body was discovered by her husband, businessman Thierry Funck-Brentano. The cause of death is unknown, but foul play isn’t suspected.

Pisier was expected to take part at an homage to Jean-Paul Belmondo, with whom she had co-starred in Gérard Oury’s L’as des as / The Ace of Aces (1982), at the Cannes Film Festival next month.

Pisier (born on May 10, 1944, in Dalat, French Indochina [in today’s Vietnam]) had an extensive film career in France. At 17, she was discovered by Truffaut, who cast her as Colette Tazzi in the L’amour à vingt ans / Love at 20 segment “Antoine and Colette.” Antoine, played by Jean-Pierre Léaud, was Truffaut’s regular on-screen alter ego.

Co-directed by Truffaut, Shintaro Ishihara, Marcel Ophüls, Renzo Rossellini, and Andrzej Wajda, Love at 20 wasn’t exactly a highlight of any of the directors’ careers. Truffaut, however, perhaps identifying with Antoine a little too much, became so enamored of his Colette that he temporarily left his wife and children for Pisier.

Pisier’s Colette would be seen twice again: briefly in Stolen Kisses (1968), in which Léaud/Antoine’s romantic interests are Delphine Seyrig and Claude Jade, and in the last installment in the series, Love on the Run (1979), an unhappy experience for Truffaut (“François hated this project very early on,” Pisier would say), and one that she also co-wrote.

Pisier never became a New Wave star. Despite her early association with Truffaut, her career as a serious film actress was to take off only in the ’70s, after working with the likes of Jacques Rivette in Celine and Julie Go Boating (1974), to whose dialogue and situations she and fellow players Juliet Berto, Dominique Labourier, and Bulle Ogier officially contributed, and Luis Buñuel in the mordant The Phantom of Liberty (1974), in which Pisier is one of several people sitting (pants down; dresses up) on toilet bowls around a table and who must excuse themselves and go behind closed doors whenever they need to munch on something.

Pisier won her first César, as Best Supporting Actress, for both Cousin, Cousine and French Provincial. She would win again the following year, also in the supporting category, for her performance as a prostitute-mother in Téchiné’s Barocco (1976), co-starring Isabelle Adjani and Gérard Depardieu.

Directed by Charles Jarrott (who died last March), the film version of Sidney Sheldon’ novel The Other Side of Midnight was a consequence of the success of Cousin, Cousine. But despite the input of adapters Herman Raucher (Summer of ’42) and Daniel Taradash (From Here to Eternity, Picnic), the period melodrama was massacred by critics. Pisier herself reportedly had trouble keeping a straight face when she had to deliver her last line in the film, something or other about loving the sun.

Yet, none of that prevented the good-looking but overlong (2h45m) and overripe melodrama about love, lust, greed, jealousy, and revenge from becoming one of the year’s biggest hits, earning 20th Century Fox $18.4 million (approx. $88.54 million today) in rentals (* see next page) in North America. 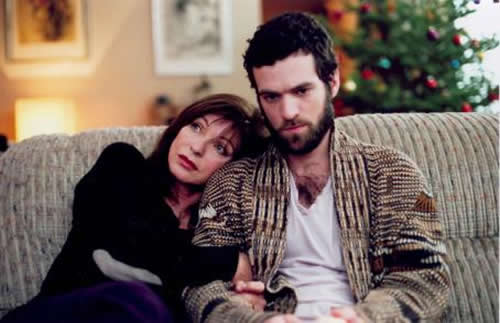 “What’s a bright and beautiful young French actress like Marie-France Pisier doing in a piece of shlock like The Other Side of Midnight?,” asked Newsweek. “Pisier obviously isn’t satisfied working for talented non-millionaires like François Truffaut, Jacques Rivette and André Téchiné … .”

Perhaps because of the harsh critical reaction to The Other Side of Midnight, Pisier’s Hollywood career failed to take off. (Leslie Caron remained the only French actress to have a successful Hollywood career until, one assumes, Marion Cotillard, what with Inception and the upcoming The Dark Knight Rises.)

I should add that notwithstanding widespread assertions that The Other Side of Midnight was a box office flop, that isn’t true. A disappointment, perhaps, for a studio that seemed to be expecting another Gone with the Wind, but one of the year’s top-fifteen box office hits.

Also of note, as the Hollywood Cinderella story goes, Fox used likely blockbuster The Other Side of Midnight to book likely flop Star Wars at the same theaters. That’s a curious story, considering that the practice of block booking had been banned decades earlier.

Anyhow, in the late ’70s Pisier was back in France working for Truffaut in Love on the Run and with André Téchiné in The Bronte Sisters (1979), playing Charlotte Brontë opposite Isabelle Adjani’s Emily Brontë and Isabelle Huppert’s Anne Brontë.

Pisier kept on working in the last three decades, though not in the same pace as, say, Huppert or Catherine Deneuve.

More recently, Pisier had one of the key roles, as Madame Verdurin, in Raoul Ruiz’s stunning-looking, all-star film version of Marcel Proust’s Time Regained (1999); and could be seen as the glamorous divorced mother of Romain Duris and Louis Garrel in Christophe Honoré’s homage to the New Wave, In Paris (2006).

Pisier made her last film appearance as a somewhat xenophobic French bourgeoise in Anne Depétrini’s Il reste du jambon? / Is There Any Ham Left? (2010).

Additionally, Pisier directed two films, both telling semi-autobiographical stories: The Governor’s Party (1990), starring Kristin Scott Thomas and based on Pisier’s own novel about her childhood in New Caledonia, and Like an Airplane (2002), a family drama inspired by the death of her own parents (both committed suicide), and in which she acted opposite Guillaume Depardieu.

Off-screen, the liberal-minded Pisier was an ardent defender of women’s rights and legal abortion, having signed Simone de Beauvoir’s April 1971 manifest demanding the legalization of the procedure. She was also a breast cancer survivor.

A statement credited to French president Nicolas Sarkozy lauded Marie-France Pisier for representing “that supreme elegance born out of the most perfect simplicity.”

Referring to Pisier as an “engaged intellectual” – Pisier, for instance, took part in the student protests that paralyzed France in 1968 – that country’s Socialist Party also issued a statement that read in part:

France has lost one of its most emblematic actresses and the Socialist Party joins those close to her and the French cinema family to share in their sorrow.

Source for The Other Side of Midnight‘s box office figure: Aubrey Solomon’s 20th Century Fox: a corporate and financial history.

* Strangely, on its The Other Side of Midnight page Box Office Mojo claims the film grossed $24.65 million. That seems much too low a figure for a movie that generated $18.4 million in rentals, for studios generally keep about 50-55 percent of a film’s domestic gross.

Michel Serrault: ‘La Cage aux Folles’ & ‘Get Our Your Handkerchiefs’

Just found out Ms Pisier had passed. I enjoyed The the Other Side of Midnight very much. She was so beautiful.

Marie-France was a beautiful and talented actress. A big star in France that should be better known in other countries as well.

An informative look at one of France’s loveliest actors. Thank you.

Very sad. May she rest in peace.

I saw this movie when it first came out and I clearly remember being impressed by the beauty of this actress, loved this film, the views of that great city in which I lived for 4 months after watching this movie and I was truly amazed of the fact that I myself was suddenly living there something I didn’t plan on it …. Very sad to just now found out the dead of Marie-France …. For some reason this film stuck on my mind for many years but I couldn’t remember the name of it until recently by searching her movies …. She definitely will be missed …. Great actress …. Great Drama …. My deepest condolences to her family ….

Wrong The other side of Midnite is amazing watch it and see.

These were all great movies, they have an absolutely amazing photography and, of course, magical views of Paris accompanied with wonderful music.

Just wanting to see if Ms. Pisier was apprearing in anything currently, I was terribly saddened to learn she had recently died….apparently while swimming in her pool at home. I first saw her in the terribly maligned “Other Side of Midnight” and was struck by her unique beauty and acting ability. One might say I had a teenage crush on the lady, not unlike that which “young” men are wont to acquire while watching movies in their teen years. She will be missed by movie buffs everywhere. Sincere condolences to her husband, other family members, and her true friends.